And like some companies, Espinosa showed off some of those products at the 2016 IPCPR Convention & Trade Show. One of those was the Espinosa Reggae, which looked like most of the other lines of similar ilk: rushed. Ahead of this year’s trade show, Espinosa announced the cigar in a much more formal aspect. It had updated packaging, three new sizes and a sub-brand: Reggae Dread.

It features a different blend than the rest of the line: an Ecuadorian habano wrapper instead of a rosado varietal and Honduran tobacco joins the fillers of the Dread, something that’s not particularly true of the regular line.

The filler in both blends features a Jamaican tobacco called lengua de vaca, which translates to cow tongue. But that’s not the star of the show. Instead, that award goes to the cap, which features strings of tobacco sprouting from the cap to mimic the dreads that are associated with reggae music. The aforementioned cap takes most of the attention, but this is a massive cigar, something that you notice when you realize that it comes packaged in a seven-count box. Pictures show the wrappers much darker than they appear in person, though it’s towards the middle of the palette of what I come to expect of Ecuadorian habano. Aroma off the wrapper is pretty mild as the cigars have been out of cellophane for close to two months. For what it’s worth, there’s leather and cedar, both fairly generic. The foot is hardly generic with some sweetness that I can’t really identify, though it reminds me of mochi ice cream, along with some cinnamon and kiwi at the medium-full level. I wonder how long it took to put the cap on, as it’s certainly intricate. As for cutting the Dread, I find the best method is to grab the tobacco strands, i.e. the dreads, and twist them off and then use a conventional cut. The cold draw tastes like kiwi and reminds me a bit of the Capri Sun drinks I used to drink as a child.

It begins bready and somewhat sweet with floral and citrus flavors, although they are sharper than what I typically find in a cigar, then damp wood on the finish. The flavors of the Espinosa Reggae Dread continue to impress with oatmeal and lime on top of earthiness. There is some barnyard, burnt flavors and a touch of harshness on the finish, though it all contrasts well with the initial flavor. It’s full in flavor, medium-full in body, and medium in strength. Draw and smoke production impress for the most part, though one cigar needs a touch-up. 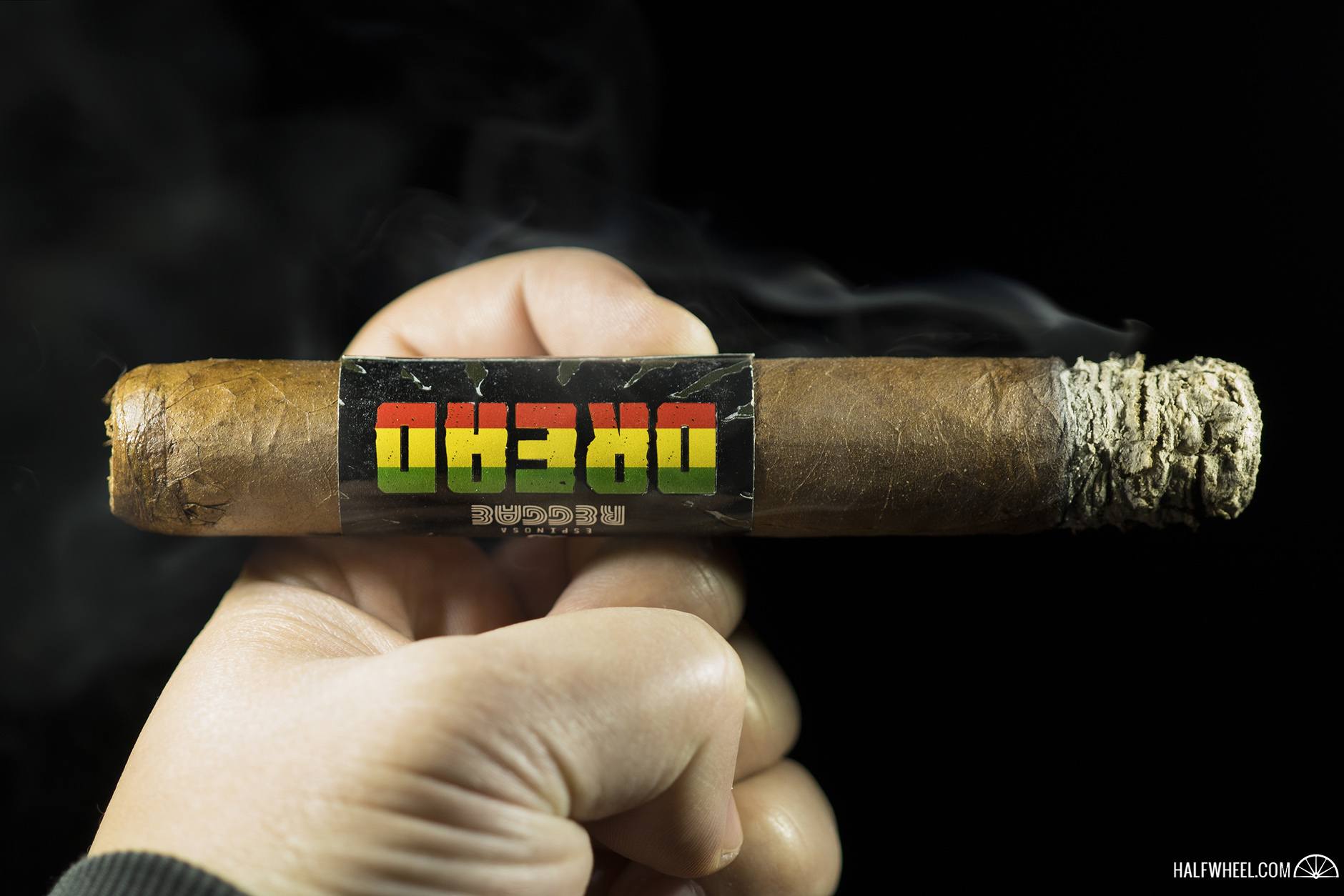 The second third of the Espinosa Reggae Dread changes dramatically with a terroir flavor overtaking things. That’s a term that routinely appears in Patrick Lagreid’s reviews, though rarely in mine, but this has a notably different type of flavor. Behind it is an apple skin sweetness, creaminess, leather and some saltiness. Flavor remains full, while body joins it at the same level and strength is medium-full, though not particularly aggressive. I rarely make note of the aroma of a cigar, but I find that it’s extremely vegetal in the final third. Fortunately, none of that flavor makes its way into what I’m tasting coming from the other end of the cigar. Instead, there’s a lot of nuttiness, paprika and the aforementioned terroir. The back of the mouth is rather peculiar with a mixture of saltiness and creaminess. With about an inch left, my mouth gets extremely dry. Flavor, body and strength remain the same as before; full in the former two and medium-full when it comes to the latter. I’ll avoid the dread puns, I promise. While Espinosa makes some very good cigars, it’s not a company I think of for making extremely finessed cigars. I certainly didn’t think the gigantic cigar with its Rastafarian-inspired cap head was going to be a bastion of complexity, but you should never judge a book by its cover. This is a full-bodied, complex cigar that left me extremely impressed. Burn issues and the final third inevitably hurt the score, but make no mistake, this is a very good cigar.