This week, the company is expected to begin shipping the next expansion to that line, the D’Crossier Golden Blend 10 Years.

There are some bold claims as to the difference between the two cigars. For starters, the company claims 40 percent of the tobacco used in the cigar was from the 2004. Secondly, it says the cigars were aged in boxes for more than a year.

The tobacco changes as well. There’s once again an Ecuadorian wrapper, but this time using a Costa Rican binder and fillers from Costa Rica and Nicaragua.

Like the original Gold Blend line, there are five sizes. 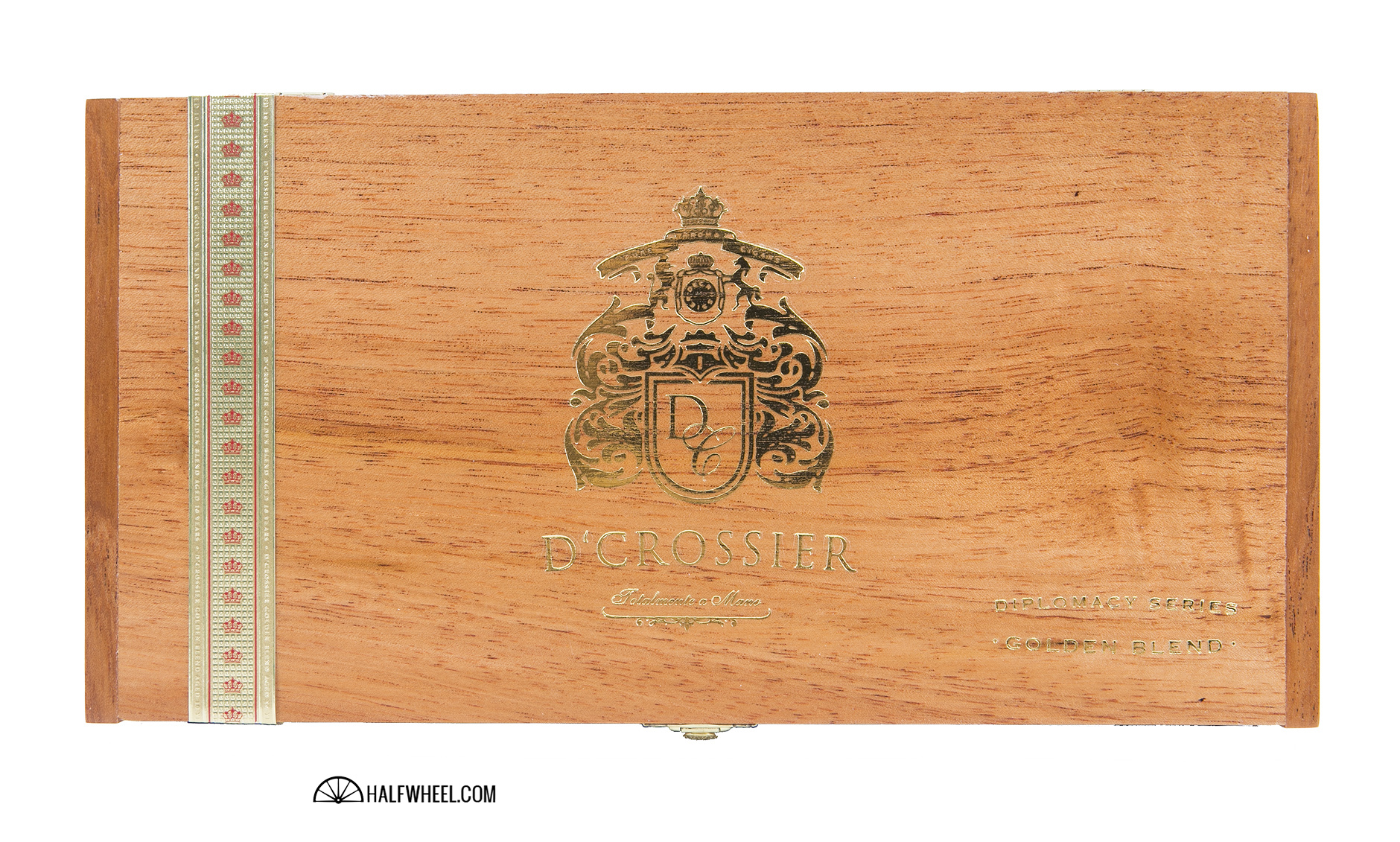 For those unfamiliar with the company, Patrick Lagreid summed up the company’s history last year:

D’Crossier may not be a household name in the cigar industry, but it is a brand that has been slowly trying to build a name for itself in recent years. The brand is the product of Miami-based Pure Aroma Cigars, Inc., a corporation that imports and distributes cigars from Costa Rica.
Pure Aroma Cigars is headed by Isaias Santana Diaz, who describes himself as a “ordinary family man, embraced by the love and passion for premium cigars.” He was born in Havana in 1973 and quickly became enamored with cigars in his native land. After time in Sweden, he arrived in Miami in the United States in 1995 and shortly thereafter became a citizen.
Diaz’s inspiration for the D’Crossier brand traces its roots to his great-grandfather, Francisco Crossier, a French winemaker who found himself on a journey to North America looking for seeds to renew his vineyards. As Diaz puts it, “the law of unintended consequences dictated he should arrive on the beautiful island of Cuba,” and it was there that he found and became enamored with the Cuban tobacco that made its way into his smoking pipe. In his diary, which remains in Diaz’s family, he writes that “the Pinar del Río Valley is a giant humidor all by itself.”
While the Crossier patriarch intended to return to France, he became enamored with the treasures of Cuba and remained there, learning the Spanish language and way of life. He transferred his agricultural skills from grapes to tobacco, as well as expanding into sugar cane and local real estate.
Diaz’s first venture into the cigar world came when he was just 17 years old; in 1990 he found and read his great-grandfather’s diary, saying that “my heart and soul were touched and I was transformed.” He tried to roll his first cigar shortly thereafter, and after realizing how challenging the process actually is, vowed to complete his great-grandfather’s legacy by crafting a truly great cigar.
For Diaz, the D’Crossier brand “embodies excellence and is crafted using a time-honored family recipe that dates back to the 19th century. He says that “Francisco Crossier’s legacy lives on within our family and through these cigars.” 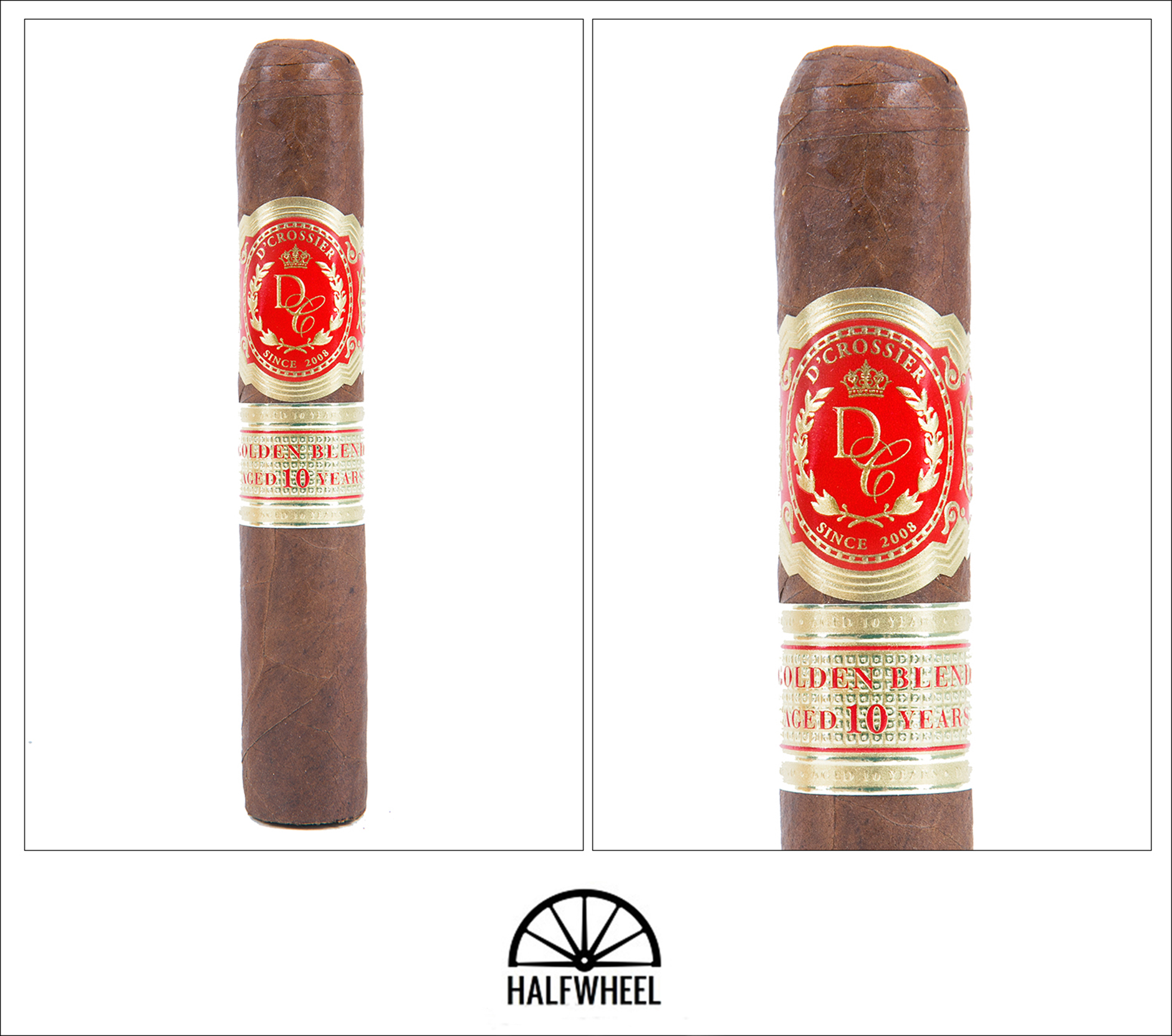 The bands, while invoking quality, are not great, but more on that below. Despite the above pictures in the box, the gold is very shiny and distracting. The dark wrapper conceals thin roll lines, although there are some veins present. A barnyard is present from the Costa Rican wrapper, but not much else. It’s much different from the foot—some soft nuttiness cherry woods, an orange chicken note and some red chili pepper. The cold draw continues the interesting flavors, a cinnamon toothpaste note, apricots and nuttiness along with touches of grass and sour.

The Golden Blend 10 Years Robusto begins with an apricot and other spices. It’s mild and a bit tighter than I expected with a great lemon flavor and some rice cake notes on the finish. There’s some sweet licorice and black tea note through the nose, both somewhat overpowered by the pepper. On the tongue I find sweet cream and nuttiness. Smoke production is average, the draw has opened up a bit and the burn, while not entirely even, has not required any correction. Strength is mild and the D’Crossier has a medium-full body. Smoke production and speed both pick up in the second third, but there’s some youth showing in the second third. A burnt apricot has emerged in the nose on top of a white pepper with some saltier nuts on the back of the tongue. The grassy finish continues, much more complex than the second third. Once again, at times you can find some harshness, something I did not get at all in the first third. Much remains the same for the rest of the Golden Blend 10 Years Robusto: mild in strength, medium-full in body, medium in flavor. With an inch and a half remaining, it’s clear the final third will not be the shining moment of the D’Crossier. The saltiness is playing a much greater role on the palate and the flavors are beginning to melt more together. In addition, the apricot note is disappearing with a much more pedestrian fruitiness left over. Fortunately, the new Golden Blend remains cool well through the last inch. It’s not bad, just not as good as the two earlier thirds. We are giving away a five-pack of the D’Crossier Golden Blend 10 Years Robusto, leave a comment below to enter. Contest rules are here. Contest ends April 21, 11:59 PM EDT.

I had heard of D’Crossier, but outside of Patrick Lagreid’s review of the Diplomacy Series, I had no clue what to expect beyond a name. What I got was a unique cigar—dominated by the apricot note—that delivered enough complexity that I cannot help but want another, or a few more. If D’Crossier can make more cigars like this, it quickly will become a candidate for “under the radar” brand. I’m paying attention now.