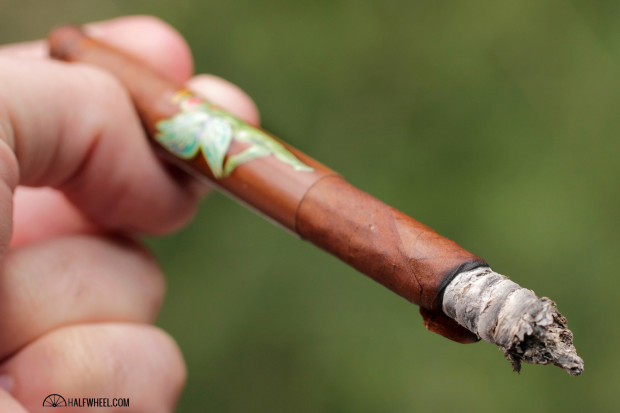 Launching this month, Crux Cigars is the creation of Jeff Haugen and Joel Rogers, who also happen to be co-owners of Tobacco Grove in Maple Grove, Minn., as well as the cigar case company Armored Humidors.

The pair have spent the past several years developing their debut pair of cigars, which include Ninfamaniac and Skeeterz. Besides their suggestive names, both cigars share a trait that is becoming more and more unusual among new cigar releases: they are incredibly small ring gauge. The Skeeterz is a 4 x 32, while the Ninfamaniac is a 7 x 33–-ninfa with double perfecto ends.

Mark Daum, who designed the Ninfamaniac art, commented to halfwheel that it’s “the combination of a cigar in the ninfa tradition with a twist; the two ends that suggest a unique style and grace. Of course, the name suggests so much more, so I created the Ninfamaniac gal. A true nymph with suggested allure of something naughty but oh so nice.”

The cigars are scheduled to leave Nicaragua today and should be on store shelves in the coming weeks, assuming there is no delay in the importing process. 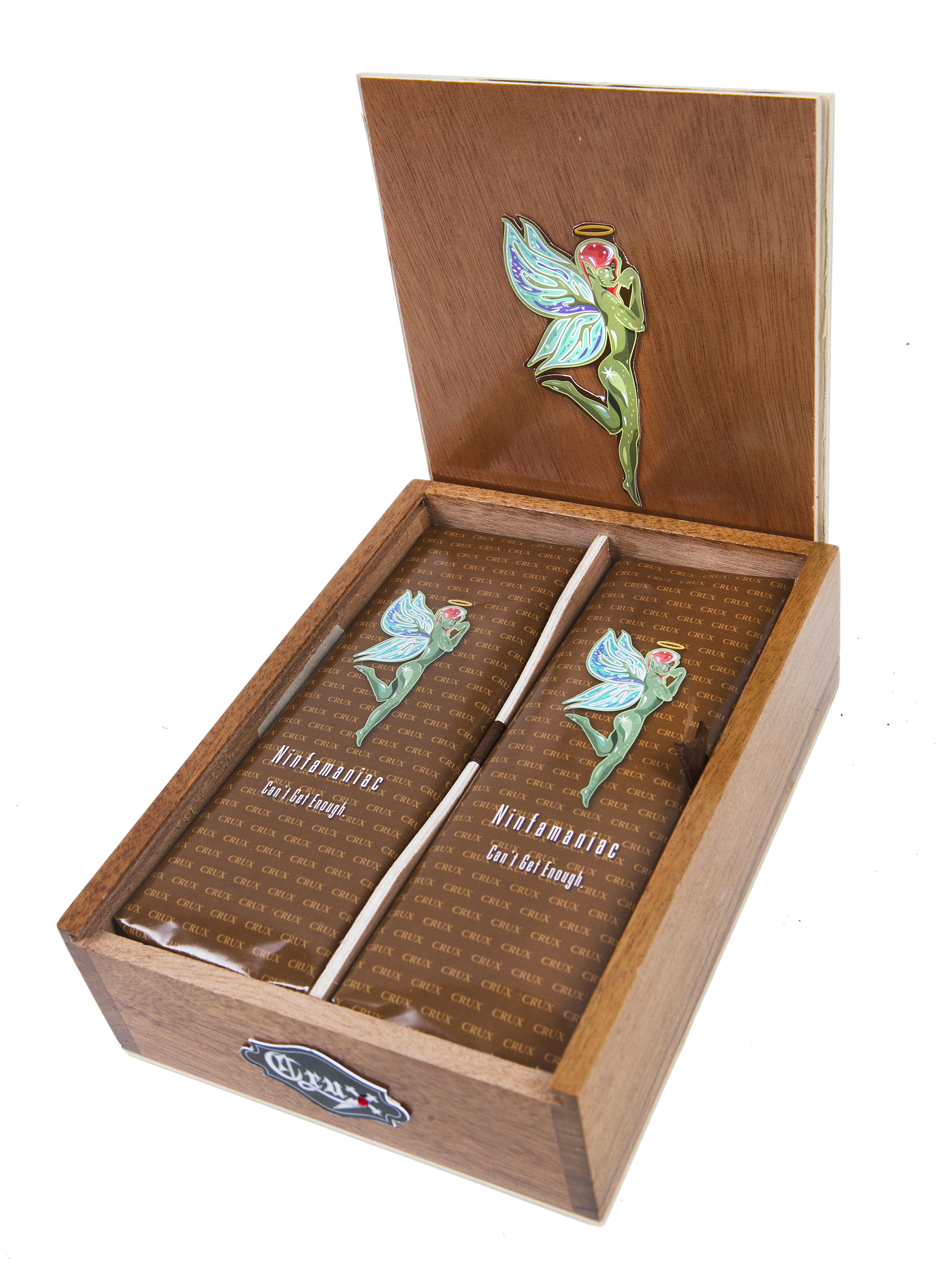 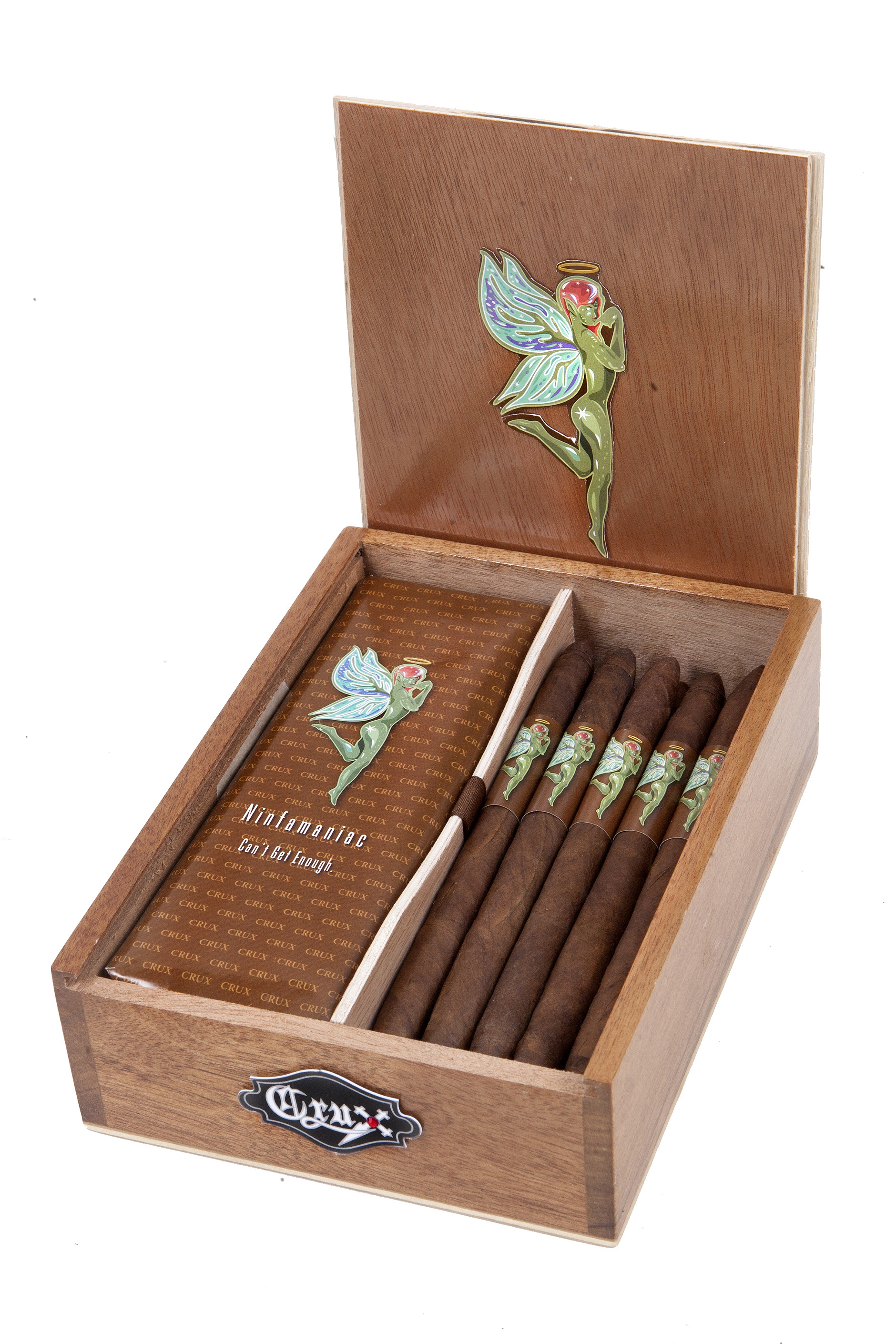 Haugen and Rogers have also announced plans for three more lines to come out in May: Passport, Classic and Bull & Bear. Unlike the first two releases, the trio will have multiple sizes available in more common sizes, though all will be made at Plasencia Cigars S.A. in Nicaragua. Likewise, each box of Crux’s five lines will feature a Swarovski crystal in the lid. 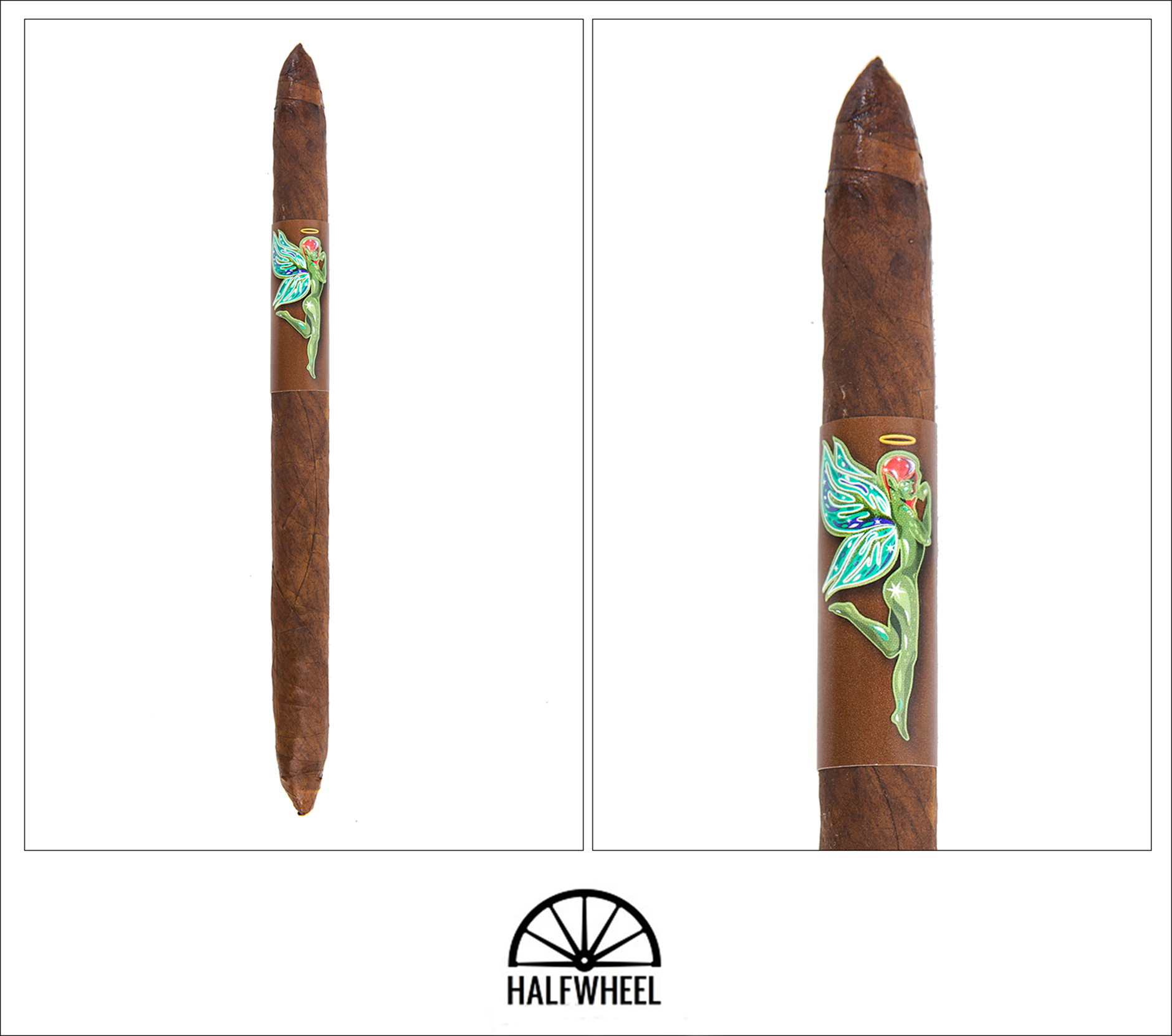 There’s no denying that the Ninfamaniac’s vitola is a unique one: an already rarely-seen ninfa but with pointed ends at both the head and foot. In fact, it feels almost like a pencil in the hand, a familiar if somewhat rarer feeling given my more frequent use of the mechanical versions. Looking past the cigar’s size, the wrapper leaf is a rich brown with a fair number of veins but an oily sheen helps the fingers glide right over them. There’s a uniform firmness to the roll and no bumps or unevenness, and the margin for error in rolling this cigar feels incredibly small when studied. Given that the foot is closed, it’s tough to get much in the way of pre-light aroma or a cold draw, and I’m one who prefers to burn through the end of a closed foot rather than cutting it off. There is a bit of a vanilla creme soda or possibly sarsaparilla note that comes off the wrapper that is both slightly sweet and syrupy, with some backing notes of damp wood.

There isn’t much problem burning through the closed foot of the cigar and establishing a somewhat firm but certainly acceptable flow of air that produces more than enough smoke. I do find myself adjusting how much of the cap to clip off in an attempt to preserve some of the pointed head while also ensuring there is enough of an opening to enable adequate air flow. There are touches of sweetness on the palate in the early going, along with some dry soil notes and a certain tangy zing that I’m inclined to think is coming from the Indonesian binder. The first retrohale is a bit challenging due to big notes of tree bark but sparing amounts of pepper. The burn line remains razor sharp with a tight, light ash. 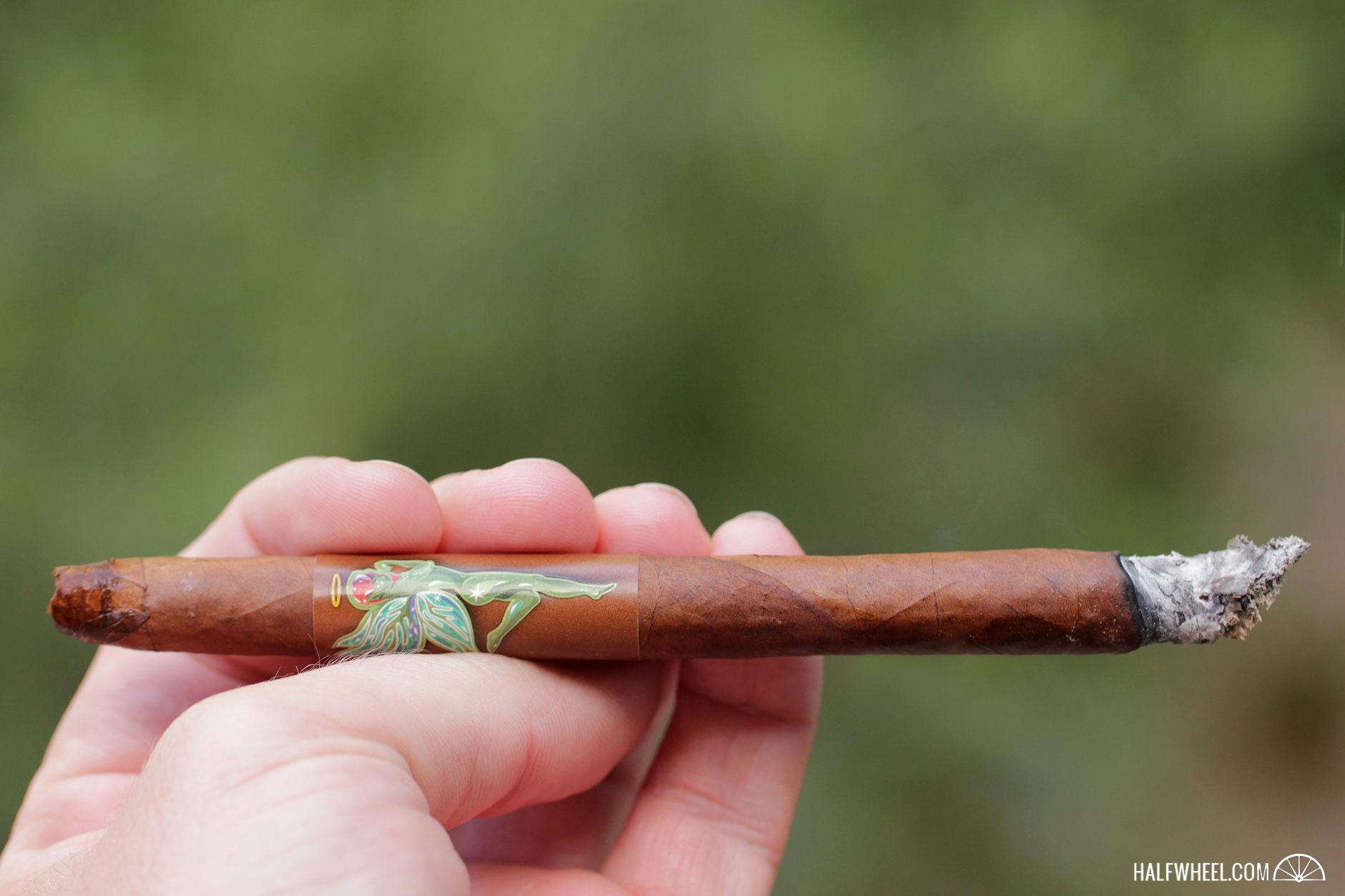 There is a slight but noticeable uptick in strength as the burn line crosses into the second third, with some underlying but muddled pepper adding some oomph to the tree bark notes and a touch of dark chocolate notes that stand a little farther forward in the mix. While somewhat lacking for pepper on the palate, the Ninfamaniac offers it in spades via a retrohale just past the midway point. The delicate ash continues to hold on as well as can be expected and frequent taps become the norm. There’s an increasing amount of pepper on the tongue though the overall strength of the cigar stays fairly tame and well-balanced, as I have yet to feel any kind of nicotine kick or gut punch from the strength. The aroma of the cigar offers some very clean notes just past the midway point, with a complex sweet and tangy wood note wafting through the air. 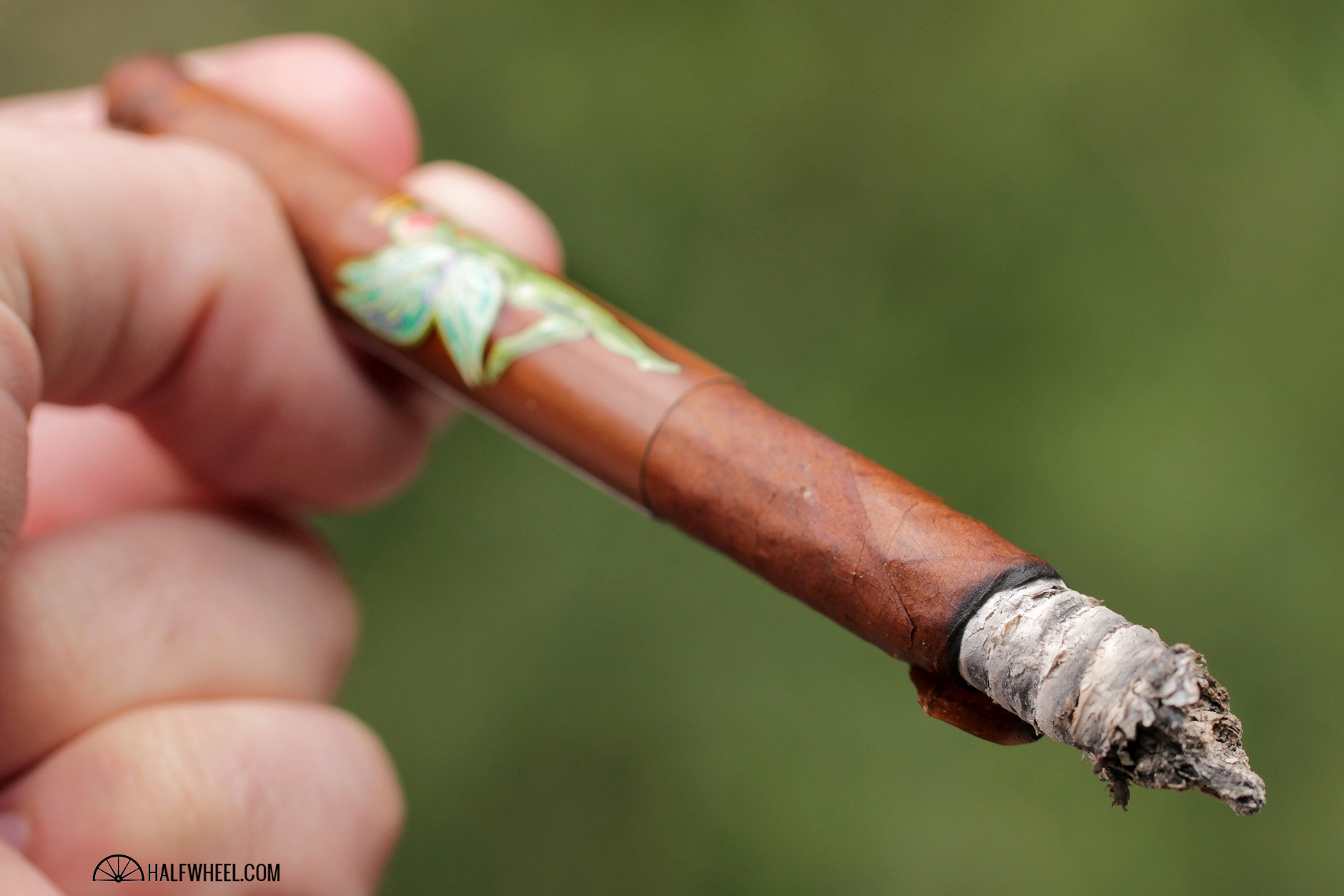 A distinct puffing up of the flavors signals the transition to the Ninfamaniac’s final third, as all of a sudden it seems the smoke gets fuller and the flavors more upfront on the senses. There is a distinct flavor twinge that comes out in the final third, hard to pinpoint but definitely a change. Not quite sour or bitter, it’s enough to have me washing my palate both to get it off and clean it so I can see if it’s still there with the next puff. It seems fleeting enough, leaving behind a bit of a brown sugar note and some woody aromatics. The burn line has remained absolutely perfect from start to finish, with the cigar able to be smoked down as far as you can hold onto it. 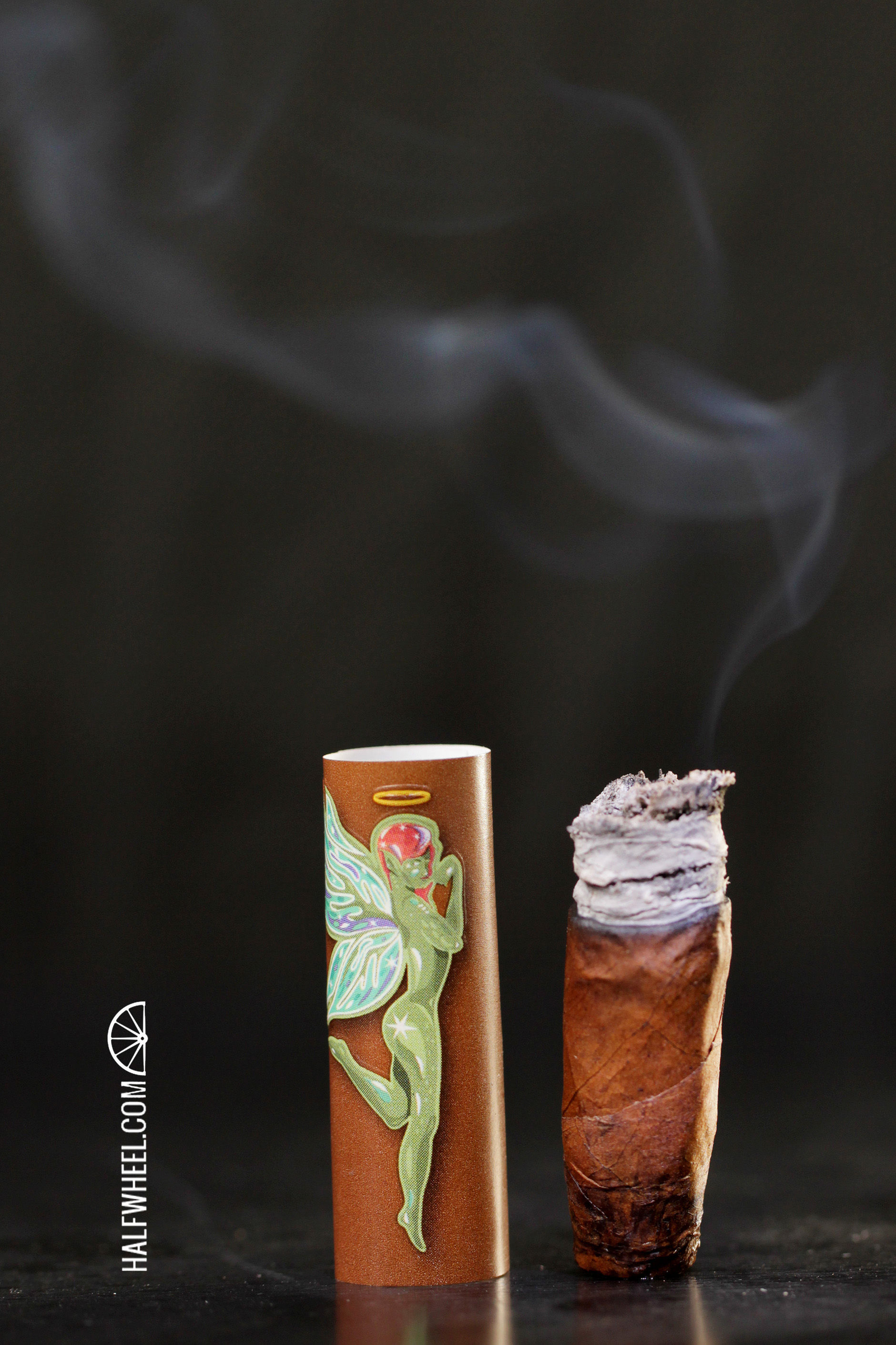 We are giving away a box of Ninfamaniacs compliments of Crux Cigars. Leave a comment to enter, rules are here. Contest closes April 13, 11:59 PM CDT.

Given the small margin for error when it comes to producing a cigar with such a thin ring gauge, the first thing that scores points for the Ninfamaniac is how great the construction was, with not a single problem to be found. Flavor wise, the blend is balanced and while not the most complex I've ever had, shows moments of near brilliance and hardly ever strays into unfavorable territory, with the Indonesian binder seemingly adding a flavor component that isn't found nearly enough. For as much of a fan of small ring gauges I am, this might be pushing the other end of the extreme, but for me it works. Between the price, size, flavor and construction, there's really not a lot to argue with and no reason you shouldn't give them a try.