A new company out of Finland is getting into the cigar accessories segment with a pair of cutters, a trio of humidors, and a show-stopping lighter.

Conocedor, which means connoisseur in Spanish, officially launched just over a month ago after spending a year prototyping products and other foundational work, according to Eino Mustonen, founder of the company. Launched out of the idea to create the sharpest and most refined cigar cutters ever made, Mustonen initially sought out to make cutters for personal use, but eventually the idea developed into a quality based company with an extended range of cigar accessories. 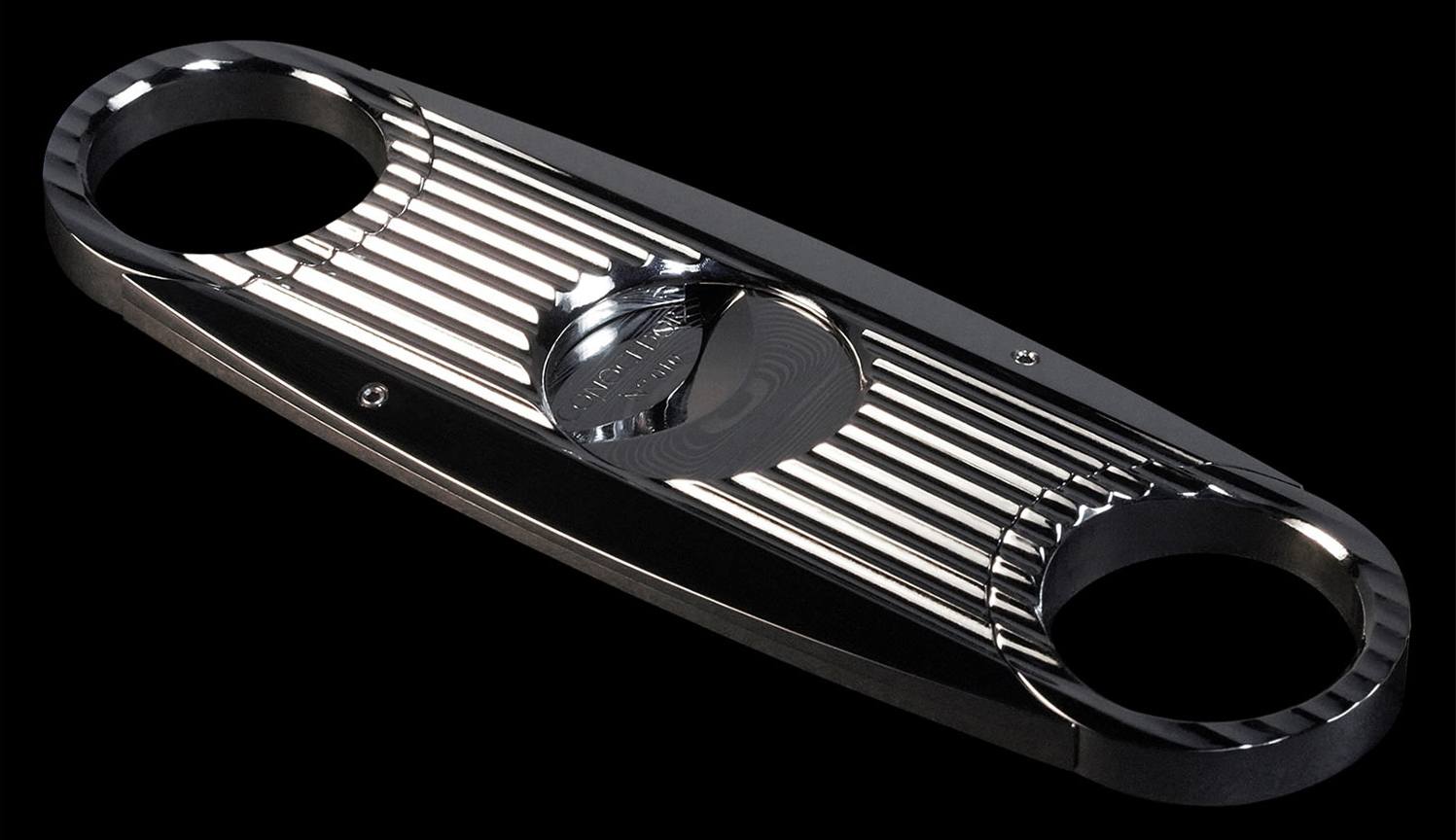 The company currently offers a pair of cutters, the Roswell (€770/$897) and the Octa (€795/$927), which both feature Damasteel stainless steel blades, mother of pearl inlays, a hand engraved logo, CNC machined parts and a unique friction free locking system. The latter’s name comes from its distinctive finger slots, which are shaped as octagons. 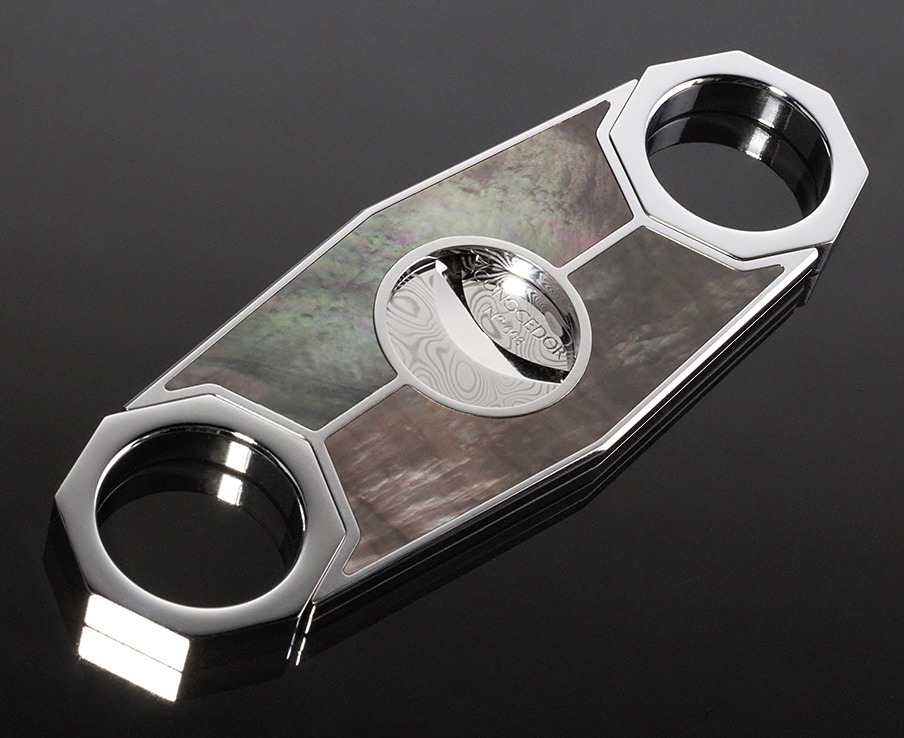 In creation of the blades, the steel is heat treated at temperatures over 1000 celsius degrees, etched in acid to bring out the damascus pattern, and then sharpened by hand with unique sharpening method that takes over one hour per blade, resulting in what the company claims are the sharpest cigar cutter blades ever made, complemented by a precise fit and smooth action.

In addition, the company has unveiled three humidors, Aires Habanos ($5,000), Vinales ($5,000) and El Capitan ($2,500). All are one-of-a-kind creations with a list of features that includes marquetry lids—a style of art made from pieces of inlaid colored veneer—as well hand engraving as well as premium quality solid woods and hardware. 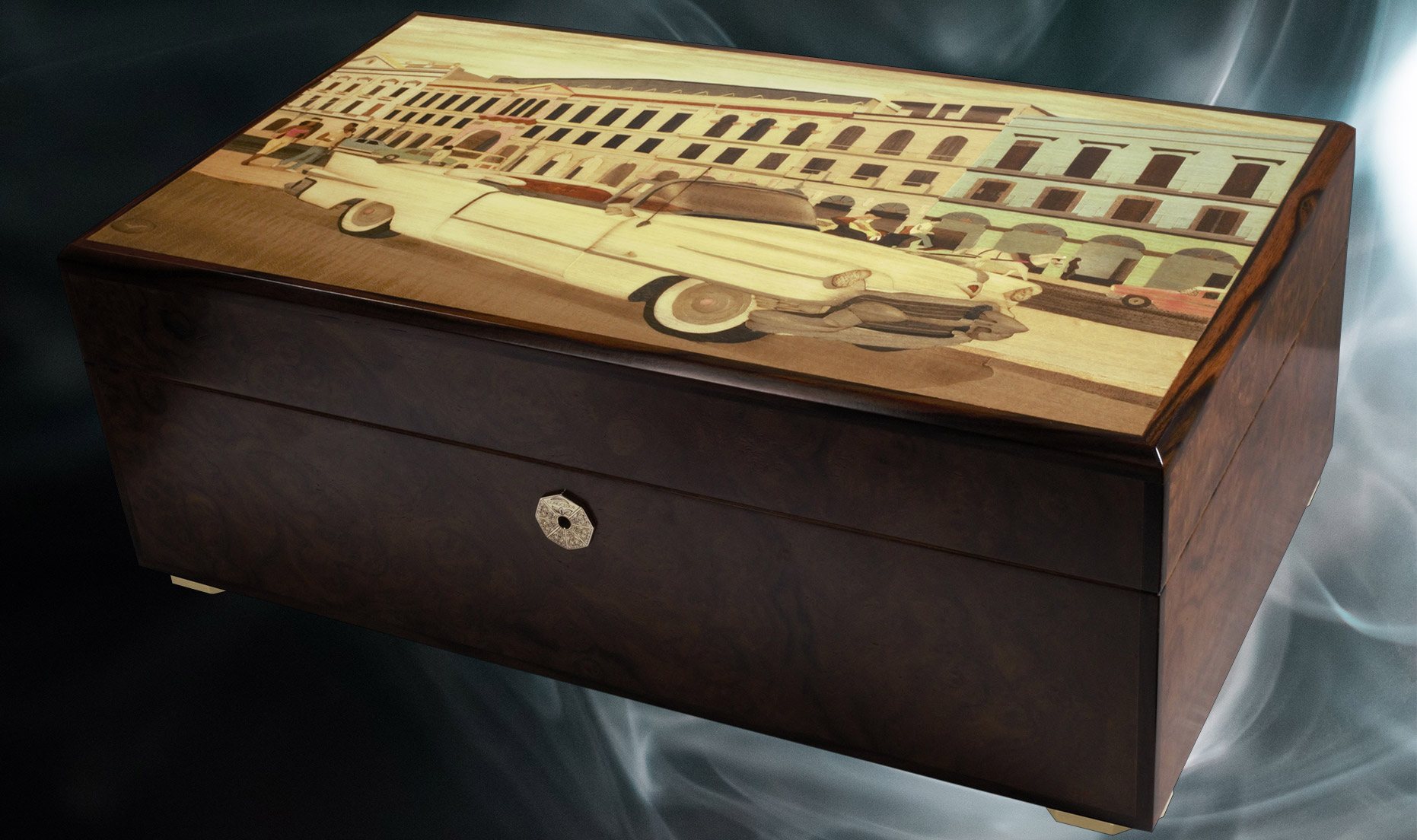 The Aires Habano measures 17 inches x 10 inches x 6 inches and features a street scene of Havana with a 1955 Cadillac Eldorado in the foreground, with each lid taking over a month to create. Inside the humidor is Spanish cedar lining with mahogany used for the sides, lid and bottom. The veneer on the outside is a highly figured walnut burl, while the edge bindings are made of macassar ebony, a very hard wood selected both for its decorative look and ability to protect the humidor from dents. The lid is attached with large full mortise hinges to reduce stress on the wood during opening and closing, while the escutcheon for the German-made lock is CNC machined from stainless steel, mirror polished and gold plated. Attached to the lid are a German-made analog hygrometer with Conocedor logo and USA-made bead humidification system. The Vinales model is the same dimensions as the Aires Habano, but features Cuba’s famous Viñales valley of Pinar Del Rio province portrayed in marquetry. The area is both a world heritage site and the source of premium Cuban tobacco. 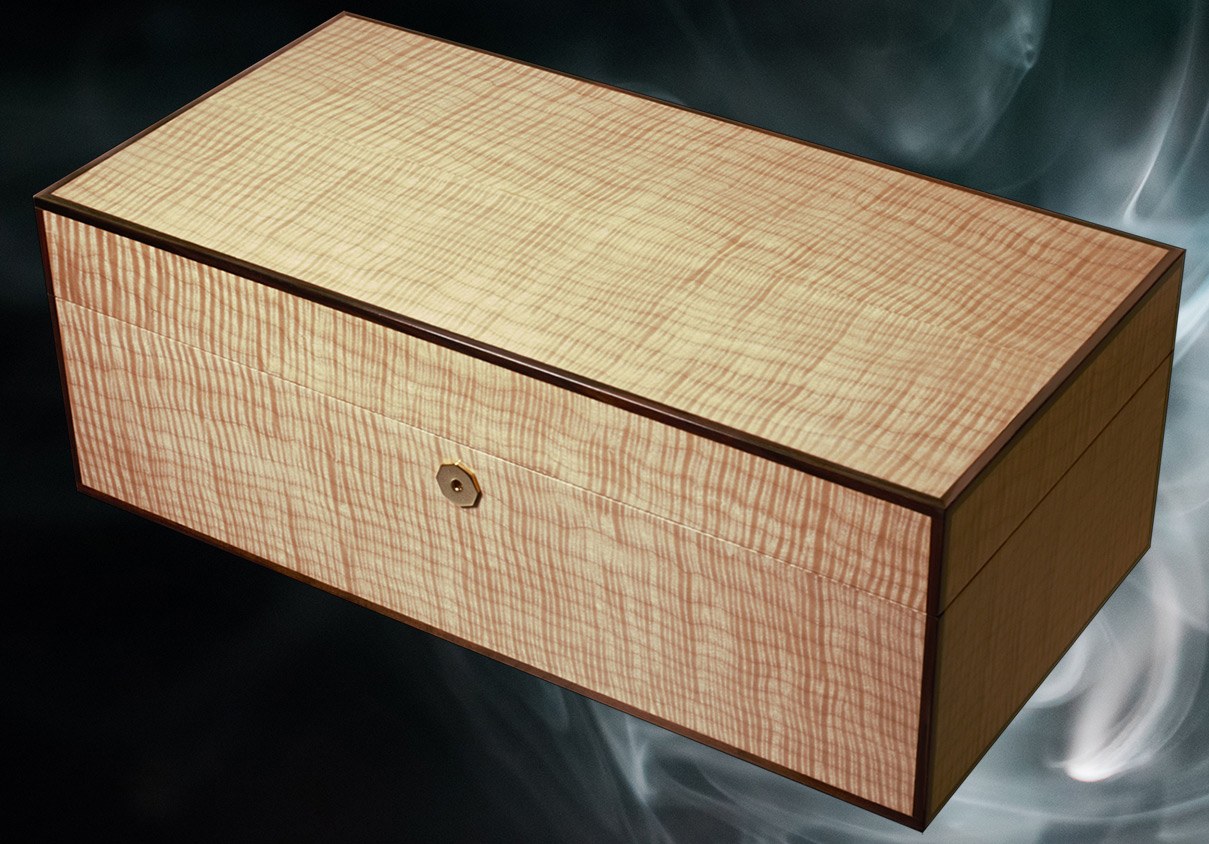 The El Capitan is the company’s largest, measuring 10 inches x 7 inches x 20 inches, with a tray that holds a single row of cigars on top of the humidor’s larger storage area. It features a maple veneer, with hardware coming the USA and Germany, while the escutcheon and humidor feet are mirror polished and gold plated with 24k gold. The underside of the lid also features Spanish cedar as a background for the hygrometer and humidifiers.

In addition to the three current models, the company offers bespoke humidors that are built to a customer’s desired specifications, including marquetry lids based on the customer’s preferred picture and hand engraved escutcheons or brass plates to highlight a gift inscription or monogram. 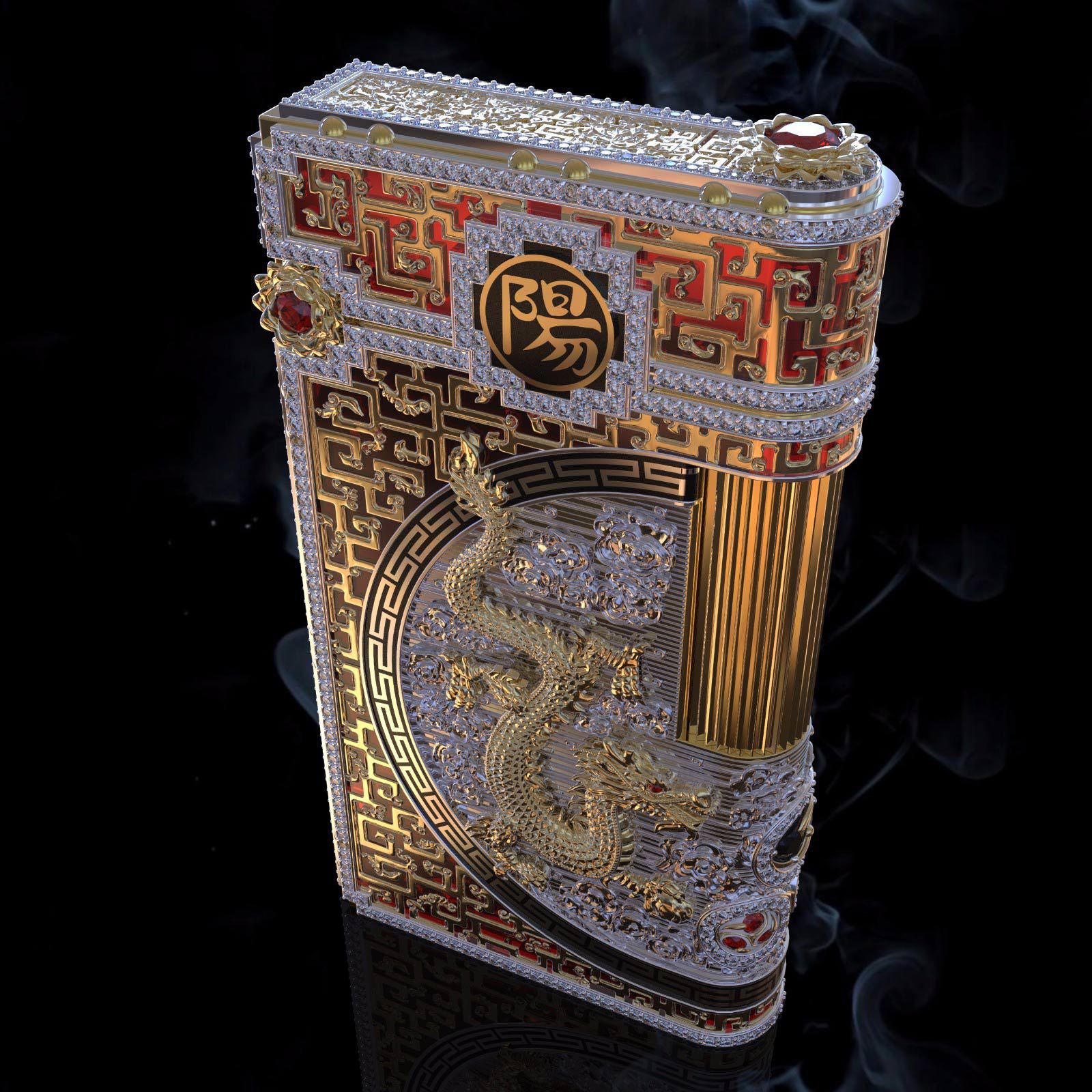 Finally the company has a single, unnamed lighter, but it is exquisite, made of solid gold and platinum, with decorating diamonds and rubies. The Chinese characters of Yin and Yang can be found on the lid’s decorations, each on one side of the lid. The company declined to provide specific pricing, though said it’s in the “tens of thousands” of dollars.

For now, the company is accepting orders via its website, with hopes of expanding into U.S. retailers in the coming years.