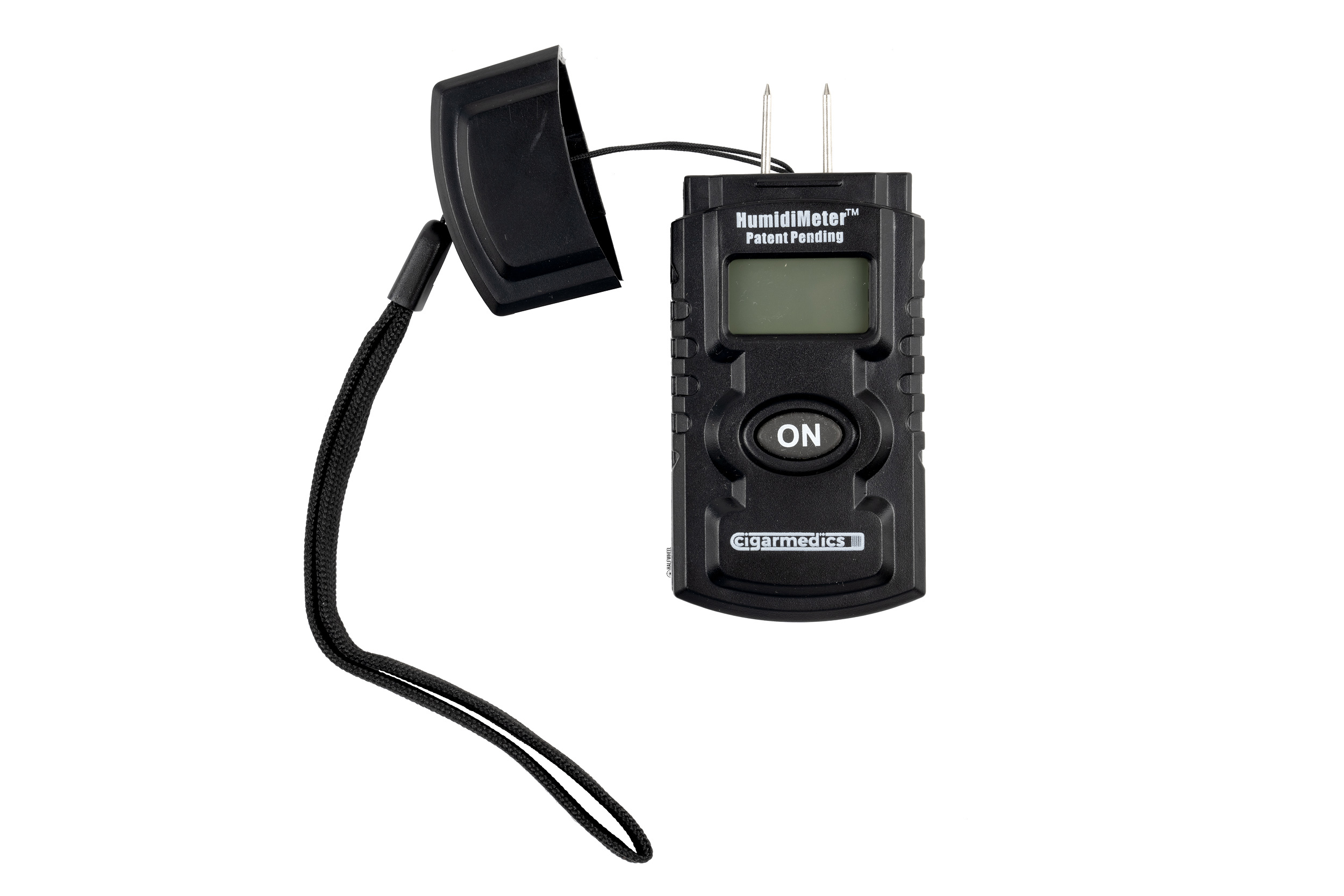 So why not do the same things for cigars? 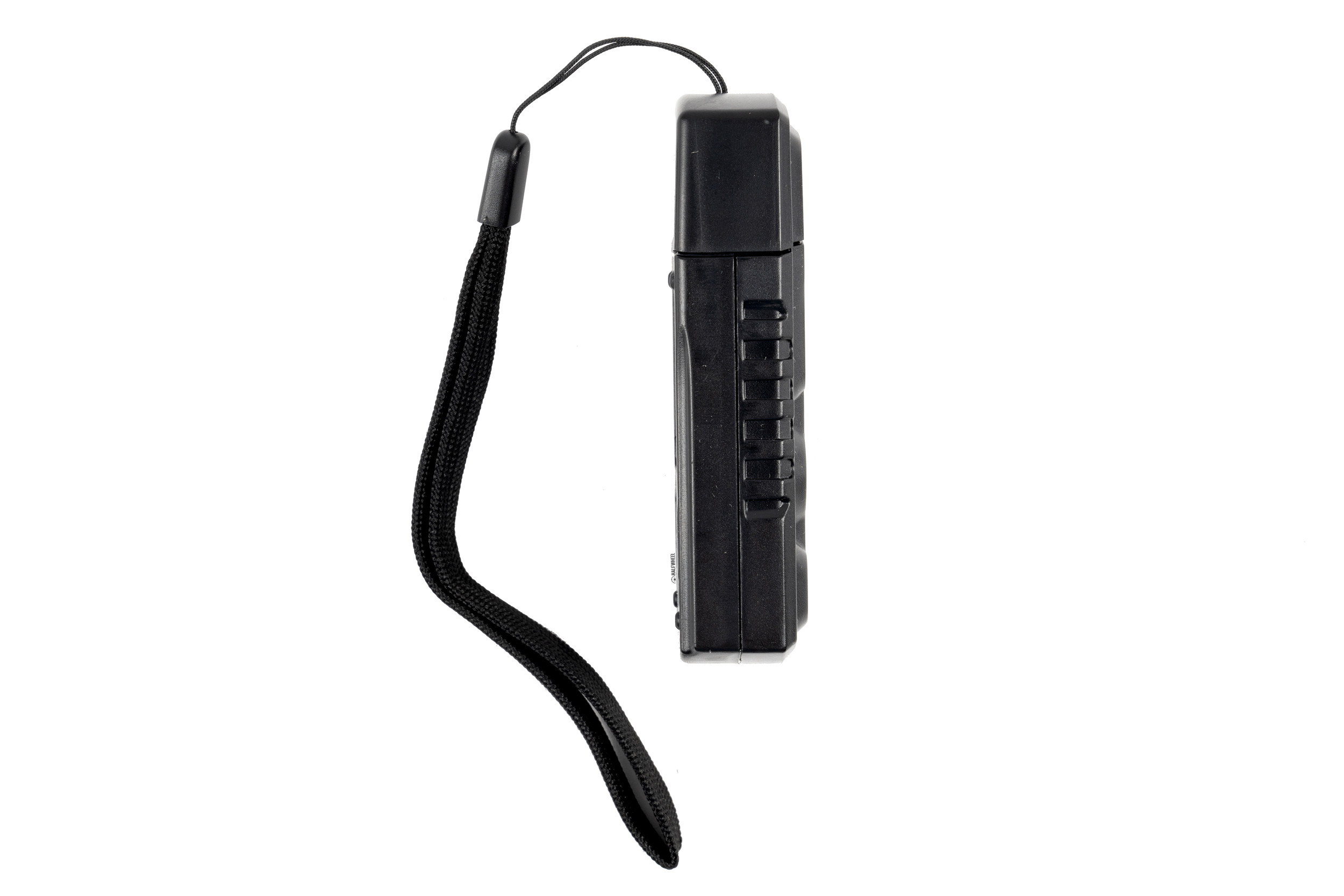 The HumidiMeter is a moisture meter that has been specifically designed for cigars. It’s a small black device with a screen and a singular button. There’s a cap that is attached to the device via string, and under that cap are two metal probes. These two probes are what detects the moisture content of a cigar, so the idea is that you simply insert them into the cigar to get a reading.

There is an optional calibration device that can be purchased for $10.

The idea behind the device is to measure the moisture content inside of the cigars, sort of how the temperature probe measures the internal temperature of the meat versus the temperature of a smoker. This information is helpful for a variety of reasons such as: knowing whether your cigars are in good condition to be smoked, trying to identify if a large humidor is properly humidifying cigars in all locations or even trying to fine-tune what relative humidity you prefer to store cigars at.

As far as using the device goes it’s pretty simple. Hit the on button, remove the lid and then place the two probes inside the foot of your cigar. You’ll want to extend them fully in, so more than just the tip. You should then get a reading. You can also do the same thing on the cap of the cigar, though you will likely find the readings to be a bit higher due to the physics of a cigar. You shouldn’t leave the device in the cigar after 10 seconds, and you should wipe off the probes to remove any residual oil.

The readings will be delivered to you on the screen in relative humidity, which is easy to understand but also not really true.

The problem is that cigar smokers really only know relative humidity, so to try and explain to the cigar-smoking population that your humidor should be 65-70 percent relative humidity, but your cigars should be 12.5-15 percent moisture content is going to be a massive uphill battle. HOW DOES THE CALIBRATION WORK?

Just place the two probes inside of the screws and your device should read 70 percent.

To my knowledge, it’s the only product like this that produces results in relative humidity. You could use a moisture meter or an even more expensive water activity meter, but the data that it will produce won’t really make sense to you to help answer the question of whether the cigar is ready to be smoked. I believe I have seen someone use the Delmhorst BD2100 ($390) or at least something that looked very similar. Given that that device is 13 times the price of the HumidiMeter I’m not sure how fair of a comparison it is.

There are other moisture meters and I spent about 45 minutes searching to try to find some alternatives. I ended up buying a cheaper one (pictured above) that looked like the pins might be close enough for a cigar, but the pins were too far away for anything under 60 ring gauge. It’s a soft yes, but I think there are some cases where a device like this will be helpful. If you buy cigars via the internet and want to figure out if they are in good smoking condition, the HumidiMeter will help. If you have a large cabinet humidor or a walk-in humidor and want to make sure that all of your cigars in various corners are getting proper humidification, this will help. If you are about to smoke a high-priced cigar or a treasured cigar and want to make sure that it’s in good condition, this is a solid investment. While this probably won’t be a device I use on a weekly basis going forward, at $30 if it can save me from wasting three cigars because they weren’t ready to be smoked, it’s probably going to pay for itself. So the next time I go to smoke a cigar I only have one of left, especially one where I likely can’t find another, I’ll probably reach for the device and just make sure that the cigar is ready to be smoked.