In August 2015, Charlie Minato introduced a new Dominican-only brand to readers of halfwheel by way of his review of the Chogüí Primera Edición, a cigar that he got introduced to by Skip Martin of RoMa Craft Tobac and others on Instagram.

Chogüí’s debut cigar was released in November 2014 but only to retailers in the Dominican Republic and in fairly limited quantities, as just 6,000 cigars were produced.

As a follow-up to its debut, Chogüi released the Dos77 in July 2015, a cigar with a unique tie-in to the Primera Edición. As the story goes, during the drive between the undisclosed factory in Tamboril where the Primera Edición was made and the destination of Santo Domingo, one box of cigars was lost: box number 277. That lost box became the inspiration for the company’s sophomore release, Dos77, or 277. It also became the basis for the date that the cigars would go on sale in the Dominican Republic: July 27, or 27/7 in one stylization. 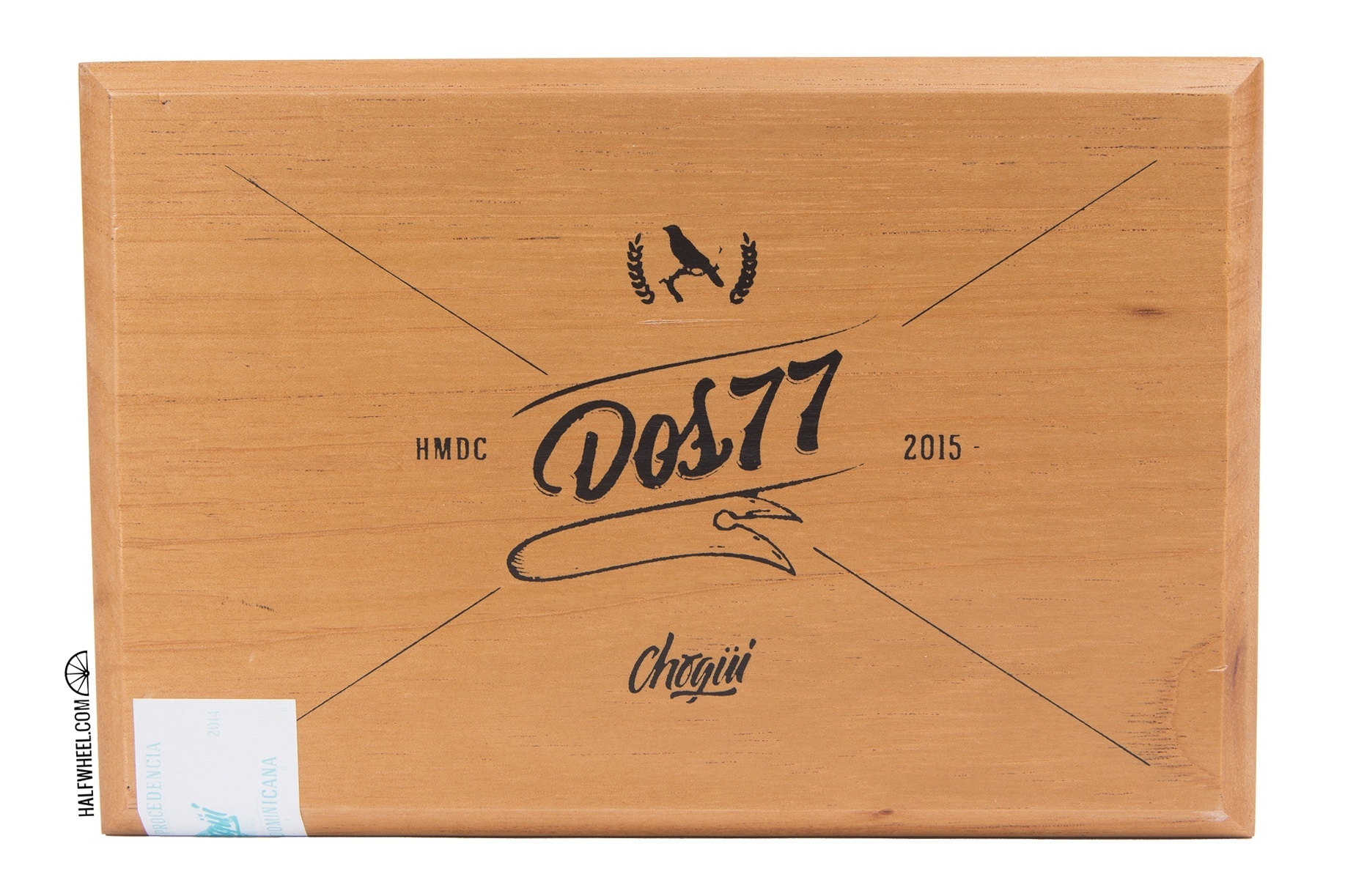 Dos77 is a 5 x 52 vitola dubbed Rogusto, a cross between robusto and gusto, with a Havana-seed Dominican wrapper, criollo 98 binder and a filler blend that contains “habano 2020” and corojo. While this will be an ongoing release, 300 boxes of 16—known as the Birdhouse Edition–were produced for the launch, with another 25,000 cigars produced for the second wave, though they will be released in boxes of 20. Additionally, the U.S. version is presented in two rows of 10 cigars, instead of the Dominican presentation of four rows of five cigars  Each version will contain the following insert: Additionally, the inside lid of the Chogüí Dos77 box adds the phrase “Lost But Not Forgotten,” with a line from Victor Nicolás telling the brief story of how this cigar got its name.

Nicolás, the man behind Chogüí, told halfwheel that two more vitolas in the Dos77 line are coming. One of them will be the Longsdale, a 6 x 46 vitola expected in January or February.

While you might be saying that this is all well and good but it’s still a cigar that isn’t available in the U.S., that has recently changed. In November, Chogüí found a U.S. distributor, Pospeich Cigars, a new distribution company launched by Mike Szczepankewicz, who also owns Cigar Hustler, a Florida retail shop. With just 250 boxes being sent stateside in the first shipment, it won’t be an overnight rollout across the country but the cigars now have a much clearer path to your local humidor. The Chogüi Dos77 is a fairly standard looking robusto, though the band’s colorful and fairly bold look give the cigar some visual character, as does the toothy wrapper with its subtle amount of crystallization. It’s a darn near rock hard cigar, firm to the point of showing just the slightest amount of give other than in the occasional spot, but those are few and far between. There aren’t many veins on any of the samples and the roll quality appears to be very good with flat seams, a tidy cap and no bumps or other irregularities that would suggest the work of an inferior tabaquero. The pre-light aroma isn’t much of a standout, offering a slightly buttery lead with not much behind it other than a very slight bit of peanut. The cold draw is pretty much spot on as far as airflow and shows a mixture of dry pretzels and peanuts, almost a perfect one-two punch of the popular bar snacks.

Almost immediately after lighting the Chogüi Dos77, the cigar offers up flavors of a latte but with more of a woody leaning, with pepper in the background to tease the palate as to what might be coming later, all of which is wrapped in a soft and smooth white smoke that billows out of the foot. While the pepper is fairly subtle on the tongue, it’s much more forward in the nose, showing a leaning towards black pepper that makes itself at home and lingers after the smoke has passed. While it’s not an issue keeping the cigar lit, there’s a definite drop-off in terms of smoke production as the cigar rests, and getting it back to its previous level of output can take some coaxing. Towards the end of the first inch, the cigar mellows out a bit on the palate and shows a bit of chalk and a cooler profile, while retrohales are still dominated by pepper yet not so much as to be overpowering, and they too pick up a bit of chalk as well from time to time. While the burn line hasn’t been perfectly straight in the first third, it’s nothing that a quick touch-up can’t fix, with the draw just right in terms of firmness and no complaints about the smoke production. The ash holds on into the transition to the second third, finally breaking off at more than an inch in length. While the first puffs of the second third are much like that of the first, I begin to get a bit of orange zest in the aroma, a bright and unexpected step in what seems like the right direction for the Chogüí Dos77. While it seems like the cigar might not be packing the complexity of the Primera Edición, a blast of black pepper to the nose has me backtracking on that assumption. A bit of charred wood comes in on the palate to give the cigar a bit more oomph, but the intensity dials back within just a matter of puffs and the cigar shows a slightly softer side, returning to those opening flavors for a bit while campfire smokiness fills the aroma. I’m still leaning towards calling this a medium strength, medium-plus flavor profile; while the pepper may be a bit much at times, I don’t get much in the way of nicotine. The draw remains near perfect while the burn stay sharp and even, the ash is strong and the smoke production is plentiful. By the start of the final third, the Chogüí Dos77 has beefed the flavor back up, adding touches of coffee and chocolate to its pepper-driven profile, with touches of earth and steak coming out in small quantities at times. Balance has yet to be an issue for the cigar, something that you’re not likely to notice because of how little of an issue it has been so far. Heading into the final inches, the smoke has thickened up a bit and reminds me a bit of a chocolate shake, albeit it without the cold of ice cream. While the flavor has become much thicker, the strength remains medium at best, as the cigar shows no interest in imparting any kind of physical effect south of the palate. That said, neither the palate nor the nose are left lacking for stimulation, as both get plenty with each puff of the Dos77. In particular, there’s a lingering pepper that hangs around on the tongue after making quick friends with my taste buds, while the nose gets a hearty amount of pepper as well. The cigar progresses steadily along its path until it’s time to put it to rest, which usually comes with less than an inch left. Given its previous unavailability in the United States, there was an added layer of intrigue to the Chogüí Dos77, much like what I picked up from the Mombacho Clasico Robusto that I reviewed in June 2012 after coming across the company’s former factory during a visit to Grenada, Nicaragua. Charlie Minato’s review of the Primera Edición only added to it, setting quite a stage for the Dos77 to deliver from. Fortunately it didn’t disappoint, and more often that not showed a tremendous amount of promise that should have retailers looking at carrying this line and consumers willing to give it a try. While the progression is fairly typical—lead with a big flavor and pepper blast before backing off, reloading and finishing strong—the flavors made it hard to ignore what this cigar had to offer, and the balance that the cigar maintained from start to finish was an added bonus. If Victor Nicolás can keep producing cigars like this, it should make for a welcome reception into U.S. stores.