In 2015, Black Label Trading Co. showed off a brand new blend at its IPCPR Convention & Trade Show booth that would become a popular annual release. Named Deliverance Nocturne, the new limited edition was made up of two unique vitolas called “Snub Nose”—specifically a 6 1/4 x 36 x 56 Salomon “Snub Nose” and a 4 3/4 x 40 x 56 Short Salomon “Snub Nose”—both of which feature shapes that drastically taper down towards the cap in order to purposely give it a thin end and a more bulbous foot.

While some of the vitolas, names and production numbers have changed in the preceding five years, the blend has remained constant: a Pennsylvania Broadleaf wrapper covering a Nicaraguan habano binder as well as filler tobaccos hailing from both Nicaraguan and Pennsylvania. All of the cigars are rolled at the Fabrica Oveja Negra factory in Estelí, Nicaragua. According to the company, the Pennsylvanian filler tobacco is ligero, which is a major contributor to the full strength that a the blend delivers.

Announced in January, the fifth release of Deliverance Nocturne consisted of three different vitolas—two of which were the same as the original versions—with each size limited to 450 boxes. The newest versions starting shipping to retailers the last week of January.

“This is the 5th release of Deliverance Nocturne,” said James Brown, founder of Black Label Trading Co., in a press release. “The Nocturne highlights everything I love about PA Broadleaf. The rich, complex and bold earthiness of the wrapper highlights the unique blend of this cigar.” 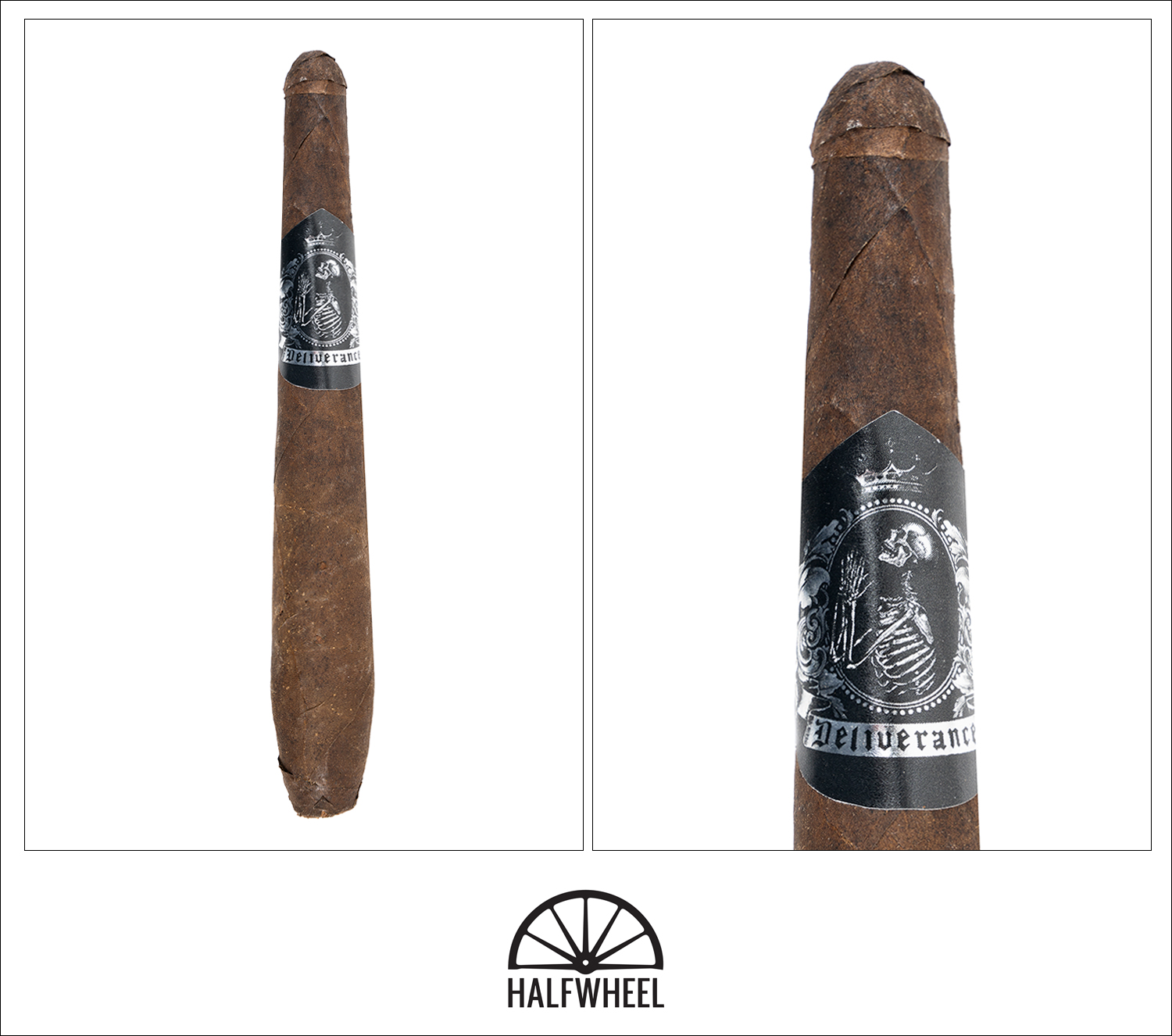 Visually, the Black Label Trading Co. Deliverance Nocturne 2020 Tall Salomon has quite a bit going for it: not only is the combination of thin cap end and bulbous foot fairly unique, is covered in a dark and veiny brown wrapper that almost black in certain light. In addition, the cigar is extremely rough to the touch and features a bit of oil. Aroma from the wrapper is a combination of strong earth, sweet barnyard, nuts, dark chocolate, oak and hay, while the cold draw brings notes of peanuts, earth, leather, freshly roasted coffee beans, strong black pepper and slight cloves.

With the gritty earth and leather notes being so prominent in the aroma and cold draw, I am not surprised that both are part of the dominant combination during the first third of the Deliverance Nocturne 2020 Tall Salomon, joined by bitter chocolate, creamy oak, hay, generic nuts and a touch of bread. There is quite a lot of black pepper on the retrohale—along with some very interesting flat Sprite-like sweetness—as well as some spice on my tongue, but everything seems to be working in harmony. Construction-wise, the draw is fairly good after I cut just a little off of the cap but the burn gives me enough issues that I have to touch it up not long after the initial lighting to keep from getting out of hand. Smoke production is both extremely copious and extremely dense off of the foot while the overall strength increases rapidly out of the gate, hitting a point just under medium by the time the first third comes to an end. If I was looking for some sort of major change in the profile during the second third of the Black Label Deliverance Nocturne, there is almost none to be found. The flavors of both earth and leather continue to take the top spot, easily beating down lesser notes of bitter espresso, creamy oak, hay and a touch of floral that flit in and out. That also goes for the spice on my tongue as well as the black pepper and sweetness on the retrohale, the latter of which has morphed a bit into a generic vanilla flavor. The draw continues to be a bit looser than I would like—although still easily within normal limits—while the burn has even up very nicely, and the smoke continues to have no issue with production whatsoever. Strength-wise, the Deliverance Nocturne 2020 has increased noticeably, easily passing the medium mark by the end of the second third. There are some major changes in the Deliverance Nocturne during the final third, just not in the way I was hoping. While the profile starts out the same as the second third, things soon take a turn for the worst: the flavors start to retreat from an assault of both black pepper on the retrace and tingling spice on my tongue, both of which are increasing significantly with no end in sight. As a result, the profile becomes increasingly more unbalanced, with both flavors and sweetens turning less and less distinct until I am tasting almost nothing but earth and black pepper. Having said that, the burn and draw continue down their excellent paths. Finally, the overall strength is also increasing, easily hitting a point just under the full mark just before I put the nub down with a bit more than an inch remaining. While the first two thirds of the Black Label Trading Co. Deliverance Nocturne 2020 Tall Salomon were enjoyable enough—the unique combination of flavors in the first sample that I can only describe as a combination of acetone and perfume notwithstanding—the entire profile basically falls apart at the end. Both the spice on the palate and pepper on the retrohale increase significantly, which in turn not only throws off the balance the blend enjoyed in the second third, but also served to overwhelm just about every other flavor other than gritty earth. The situation is not helped by the overt increase in strength that occurs at the same time, leading to a final third that is basically nothing but strength, black pepper and spice. Yes, the construction is excellent overall and there is plenty of smoke, but if you enjoy your cigars with any semblance of balance at all, I would seriously recommend that you stop smoking this cigar after the second third.