Based on the 601 La Bomba blend, the Sake Bomb shares the same Nicaraguan habano wrapper and Nicaraguan binder, but with a tweaked blend in the filler tobaccos to accommodate the smaller size and stronger profile.

We had the details in a news story back in March:

While the trend of gigantic ring gauges gets all the attention these days, there has been some counter-balancing in the form of petit coronas, a trend Erik Espinosa has picked up on. The company will begin shipping the 4 1/2 x 42 601 La Bomba Sake Bomb in May, complete with a signature fuse cap.

“We wanted to create a small cigar that packs a punch,” said Anthony Jimenez of Espinosa Premium Cigars. “So going with the bomb theme, we called it the Sake Bomb.” 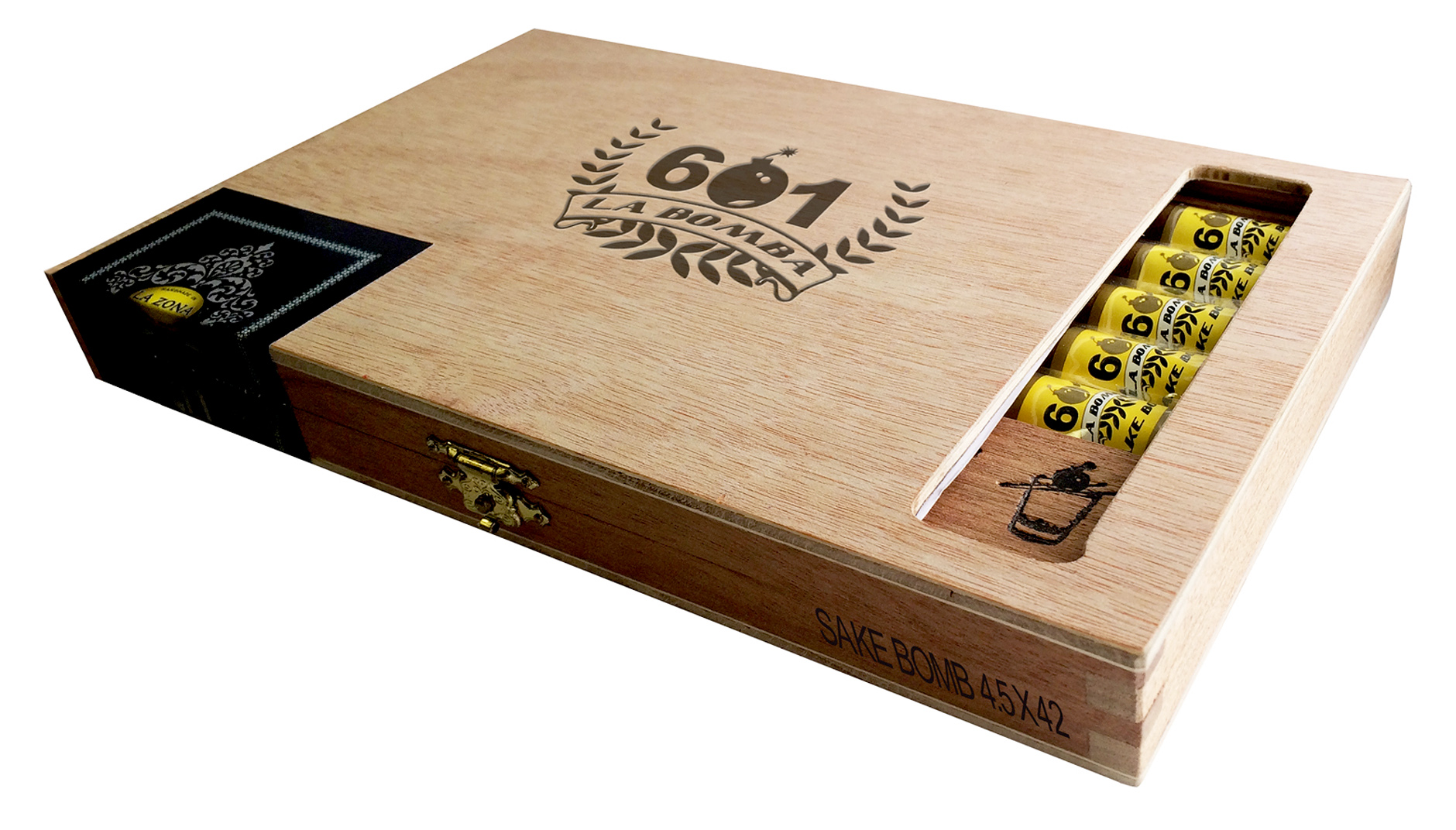 With the addition of the Sake Bomb, the 601 La Bomba line has grown to eight releases. They are: The Sake Bomb is a diminutive looking cigar, covered in a dark cinnamon brown wrapper that has quite a bit of tooth to it when rubbed. There is a long fuse coming from the cap that falls to almost the halfway point of the cigar, and the main yellow band is on the foot. Aroma from the wrapper is sweet cedar, white pepper and nuts, while the cold draw brings a distinct but slight blueberry sweetness combined with wood and leather.

The 601 Sake Bomb opens with a literal explosion of spice in the mouth that burns the tongue and inside of my mouth as well as an aggressive black pepper on the retrohale that causes me to wince the first few times I try it. Flavors in the profile are secondary at this point, but I can pick out leather, oak and earth, along with a tiny amount of sweetness that comes and goes. Construction-wise, both the burn and draw are excellent, with a close to razor sharp burn line and huge smoke production. The strength is very obvious early on, and ends the first third solidly in the medium range. 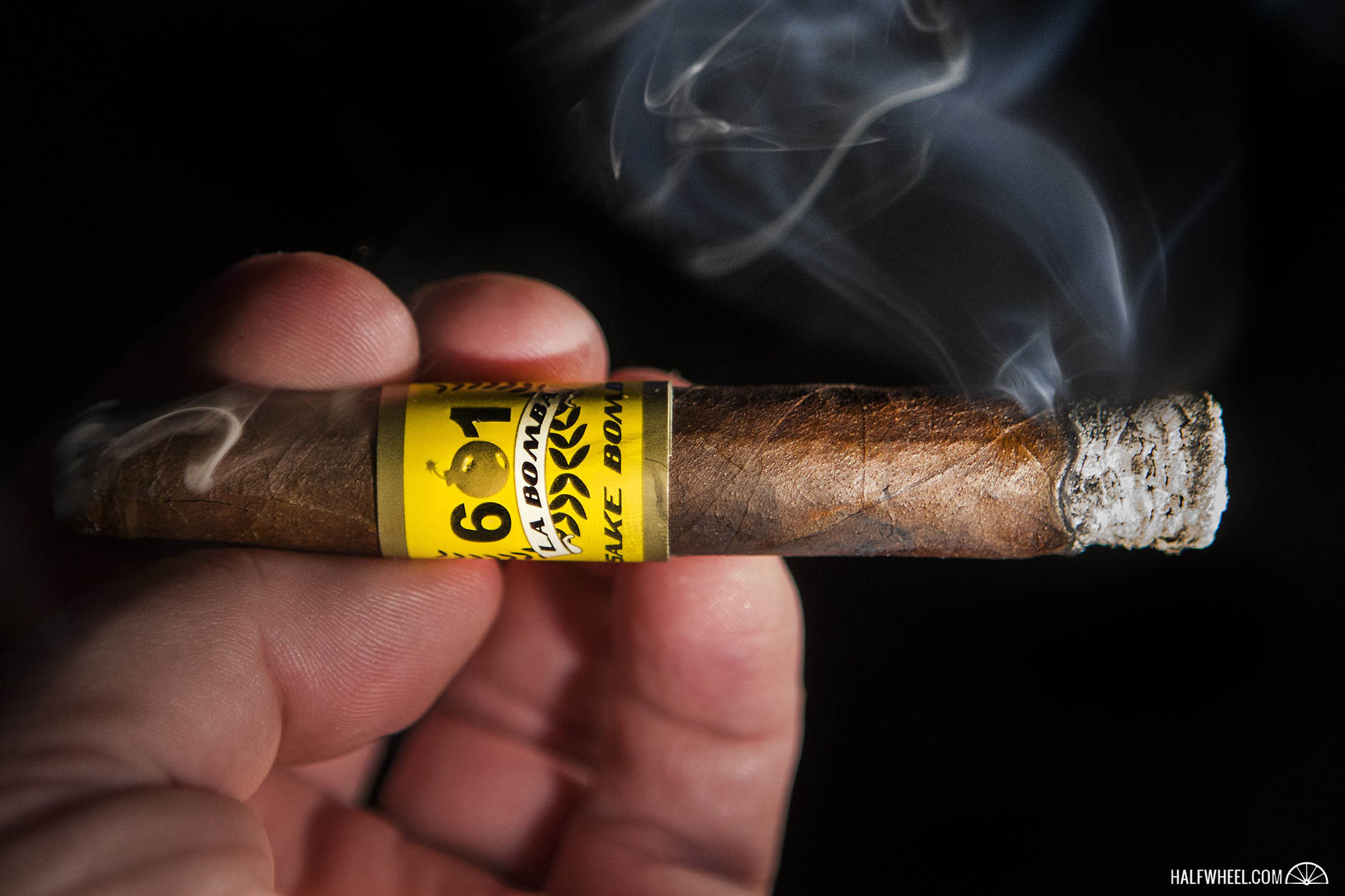 Thankfully, both the spice on the palate and the pepper on the retrohale diminish quite a bit right after the start of the second third, allowing me to taste other flavors distinctly for the first time. Notes of espresso, gritty earth, dark chocolate and hay trade spots for dominance, and the sweetness from the first third has increased as well, reminding me of nutmeg.I am also getting a fleeting barbecue meatiness that combines quite well with the pepper on the retrohale. The smoke production has not decreased at all as far as I can tell, and both the burn and draw are still wonderful in all aspects as well. Strength-wise, the Sake Bomb gets close to the full mark by the end of the second third, and is still rising. The final third of the 601 La Bomba Sake Bomb is almost a carbon copy of the second third, with the same barbecue note that comes and goes and the same flavors of earth, oak, creamy leather, coffee and hay. The black pepper on the retrohale has decreased a bit, but is still a major player in the profile, and the nutmeg sweetness has all but disappeared by the end of the cigar. While the burn and draw remain excellent on all fronts, the smoke production actually seems to dissipate a little, although it is still quite dense. As expected, the strength ends just over the full mark by the time I put the nub down with under an inch to go. 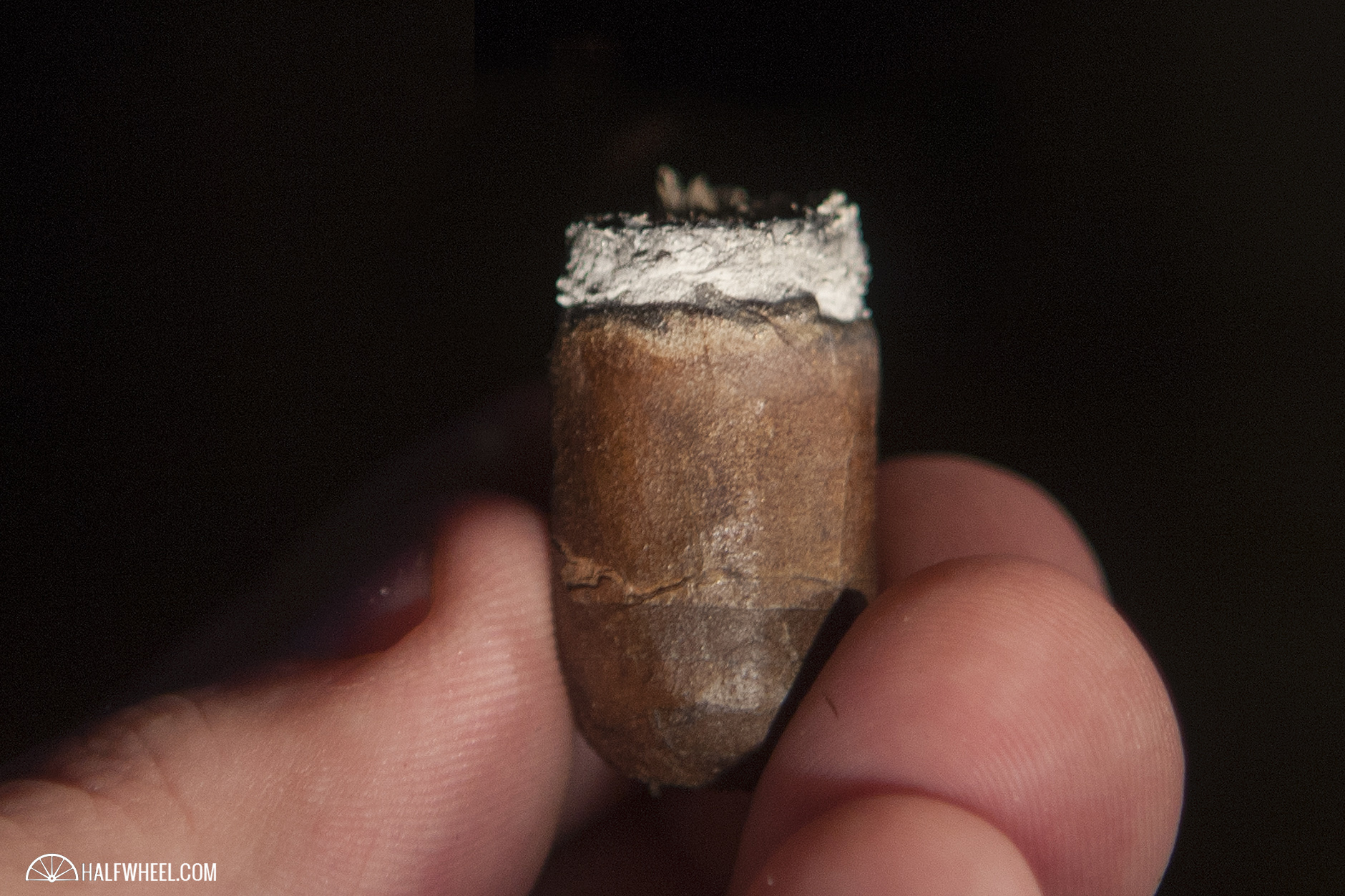 We are giving away a box of 601 La Bomba Sake Bombs courtesy of Espinosa Premium Cigars. Leave a comment below to enter, contest rules are here. While the contest will close May 2, 11:59 PM EDT, the prize may not ship until a later date.

First and foremost, the name of this cigar does not lie: this is a bomb of smoke, both figuratively and literally. It starts out with an extremely aggressive — and frankly, overwhelming— combination of black pepper on the retrohale and spice on the palate that basically destroys any chance of tasting any other flavors. However, just as you start to wonder if that is all there is to it, the profile shifts right around the start of the second third, bringing more interesting notes of barbecue and nutmeg sweetness. While not the most nuanced of smokes by any means, the Sake Bomb brings something that is sorely lacking these days: a small vitola that has some major punch to it, along with a decently complex profile. Construction on all samples was excellent, and the smoke production was massive for such a small vitola. As a blend, the 601 Sake Bomb will definitely wake you up and make you take notice, and is a cigar I can easily recommend.