For its 2013 limited edition, Zino Platinum turned to the city of New York for inspiration, as well as a group of New York City artists for the artwork on the release that featured four design takes on the single blend.

The Zino Platinum LE 2013 “The Make of New York” reunited the company with UR New York, whose work had previously been featured on 2012’s Zino Platinum Ten, as well as at the 2012 IPCPR Convention and Trade Show. For this release, the Brooklyn-based duo of Mike Baca, aka 2ESAE, and Fernando Romero, aka SKI, created a set of four unique box designs featuring aspects of New York lifestyle: fashion, music, food and mixology. The collection is said to celebrate the “four pillars of self-expression in the greatest city of the world for challenging the status quo and disruptive innovation.”

The line captured four different aspects of the Big Apple through different art: fashion was represented by The Thread of the City; music by The Pulse of the City; food through The Flavor of the City and mixology by The Spirit of the City. Inside each box was a unique vista telling the story behind the theme, and each cigar wore a secondary band denoting which of the four presentations it was a part of. Again, while there were four different presentations to the Zino Platinum LE 2013, the cigars inside were all the same.

The first two thirds of the Zino Platinum LE 2013 really lured me in and had me believing this could be a very good, albeit not truly special or complex cigar. The harshness that was found in the final third ended up costing the cigar a few points and left a somewhat negative impression in my mind. The first two thirds are certainly enjoyable, and I’d be lying if I said I wouldn’t try it again down the road, but for now, it’s a good cigar that has a flawed final third that fumbles what seemed like a pretty easy run to the end zone for an easy score. 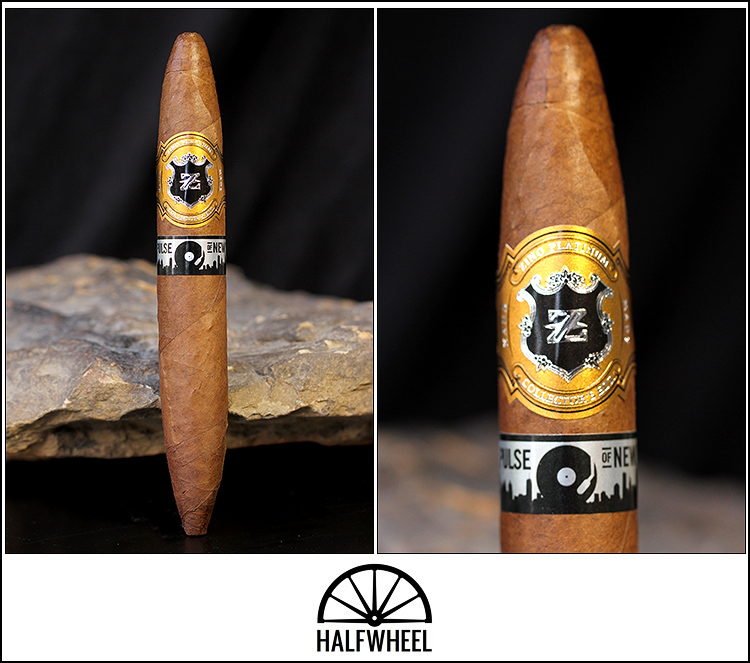 From a purely aesthetic standpoint, the Zino Platinum LE 2013 is a big win: the perfecto shape is very attractive as it draws the eyes to both the head and foot of the cigar, while the two bands in the middle bring the focus back to the body of the cigar. I still wonder about the individual secondary bands, given that the four different “versions” of the cigar are all the same blend, but that’s a point whose debate has been left long in the past. The wrapper is a gorgeous shade of brown that falls somewhere between caramel and toffee, marked by just a few small veins, no toothiness and clean seam lines. The softness of the cigar is a bit surprising, having a bit more give to it than I am used to from most cigars on the market today. The pre-light aroma comes mainly from the wrapper as the foot is so small, with notes of chocolate chip cookie dough still the lead offering. There are no obstructions or objections to the cold draw, with a touch of orange sweetness coming through, and the faintest amount of pepper along for the ride.

The first puffs of the The Make of New York are fairly mild, with smoke production restrained a bit by the closed foot. There is a touch of cedar and just a bit of pepper, both of which develop as the cigar’s ring gauge increases. An early retrohale is very mild and guided by a bit of chalk with a bit of pepper behind that. I find myself surprised throughout the first half by just how mild the cigar seems to have become; while it was never a strength monster, it had much more pronounced wood and earth notes that have definitely become subdued with more than a year of rest. As such, retrohales almost become a needed part of the smoking process in order to help pick out all the subtleties that the cigar offers. With the burn line closing in on the midway point, the strength starts to come back a bit, mainly through a fuller flavor profile and not necessarily more pepper, though there is a pinch added to give the cigar a bit more kick. The aroma also picks up a bit more character, floating some notes of slightly damp wood and earth into the ambient air. 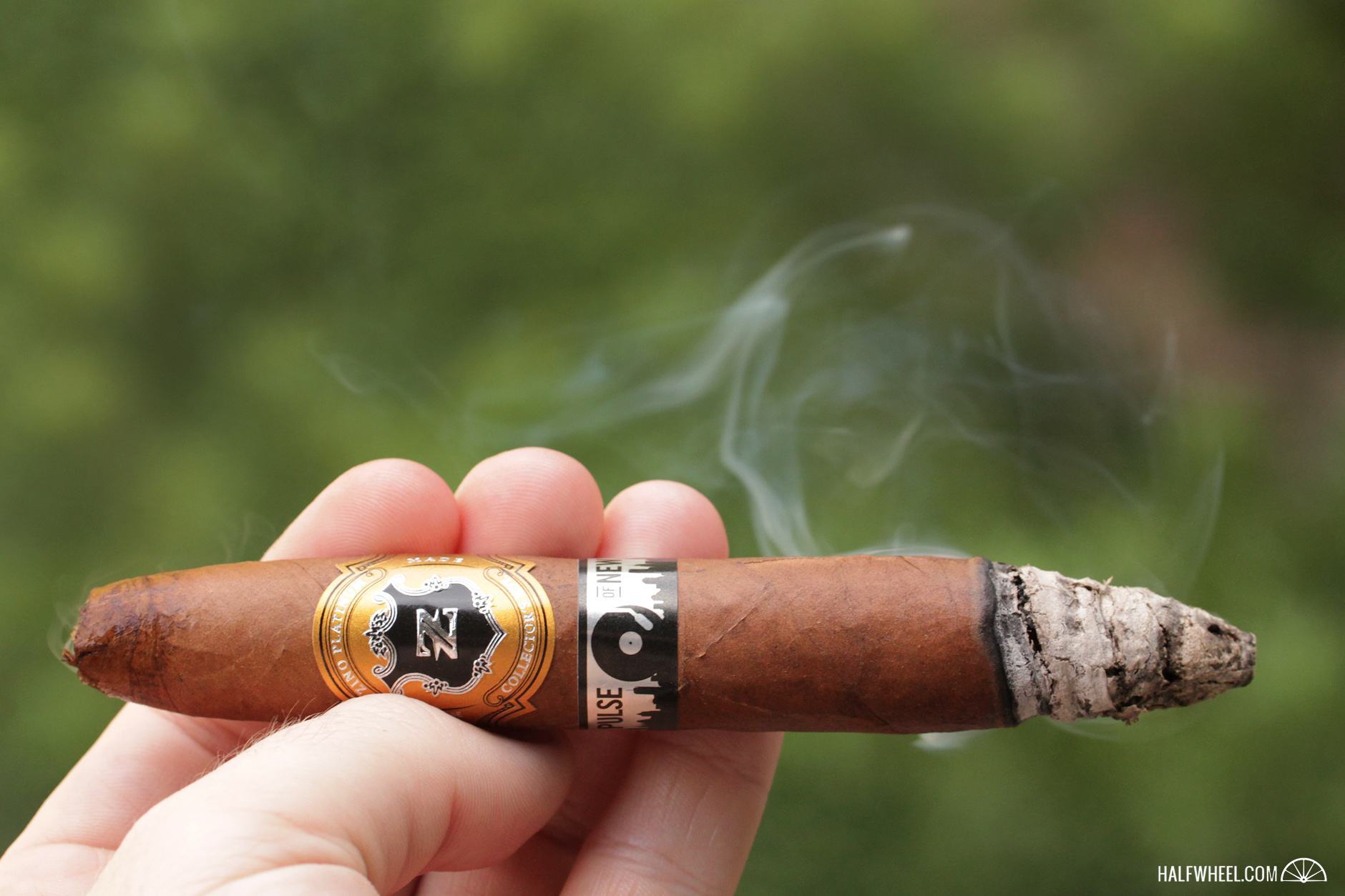 A retrohale at the halfway mark shows that there is indeed more pepper in the equation; not enough to make it impassable or unenjoyable, but enough to signal that there are some changes occuring. The subtle cinnamon note that I found in the cigar when I first smoked it is starting to reemerge, and with the surrounding flavors a bit milder, it seems to stand out in a more pronounced fashion than it did a year ago. The final third of the cigar was the one I was most concerned and interested by, as it was what had the most effect on my original impression of the cigar, with the pepper turning harsh and derailing what had been an otherwise good performance. With a year of rest on it, that harshness seems to be a thing of the past, with a more campfire-centric note on both the palate and aroma, with a bit of lingering pepper that is tasty rather than annoying or harsh. The fullest part of the cigar lies in the final two inches or so, a solid medium-plus that brings back nearly all the notes of wood, earth, campfire, cinnamon and pepper to an impressive level of complexity that leaves the palate satisfied. Technical performance has been flawless, with no burn issues, more than adequate smoke production throughout most of the cigar and not a single touch-up or relight needed.

There's nothing better than finding that time has done all the things to a cigar that you hoped it would. My biggest complaint about the Zino Platinum LE 2013 was that the final third imparted too much harshness and threw off the direction that the otherwise enjoyable first and second thirds had established. With a year of rest on it, the first half is noticeable milder, but the second half now has the opportunity to shine in the way it seems like it was blended to do. It's still not the most complex of cigars, but between some subtle notes in the first half and more upfront and very palatable notes in the second, it's certainly a cigar to light up now if you have some, or even grab at your local retailer if you have yet to try it.