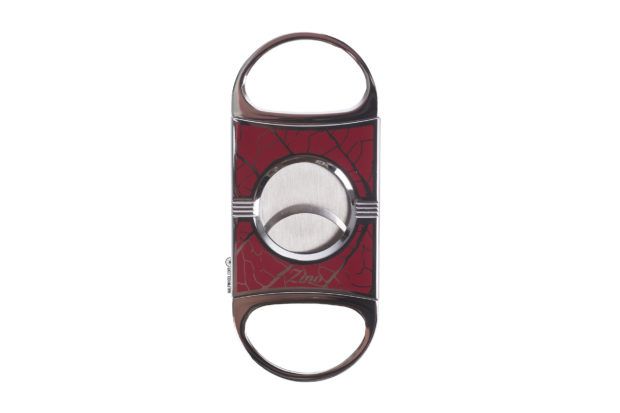 Late last year, Davidoff released three new accessories to complement its Zino Graphic Leaf humidors, which debuted during the 2015 Intertabac trade fair in Dortmund, Germany. Each of the cigar cutters, single flame lighters and cigar cases carry over the same tobacco leaf design that was present on the humidors, “revealing the leaves’ grain, veins and structure,” says the company.

“These new Graphic Leaf Collection accessories will draw in a new generation of cigar aficionados, eager to enjoy a cigar whenever they wish,” said Charles Awad, svp of global marketing and innovation at Oettinger Davidoff AG, in a press release. “It has been created to suit a busy, modern, global lifestyle. These accessories boast superb performance with cutting edge design.”

One of the three accessories released was the Zino Graphic Leaf Cutter, available in four different color combinations that match the Graphic Leaf humidors: Red/Grey, Green/Beige, Grey/Brown and Blue/Grey, each retailing for $60. There’s also a leather cover to provide protection, with everything sold in a grey gift box. 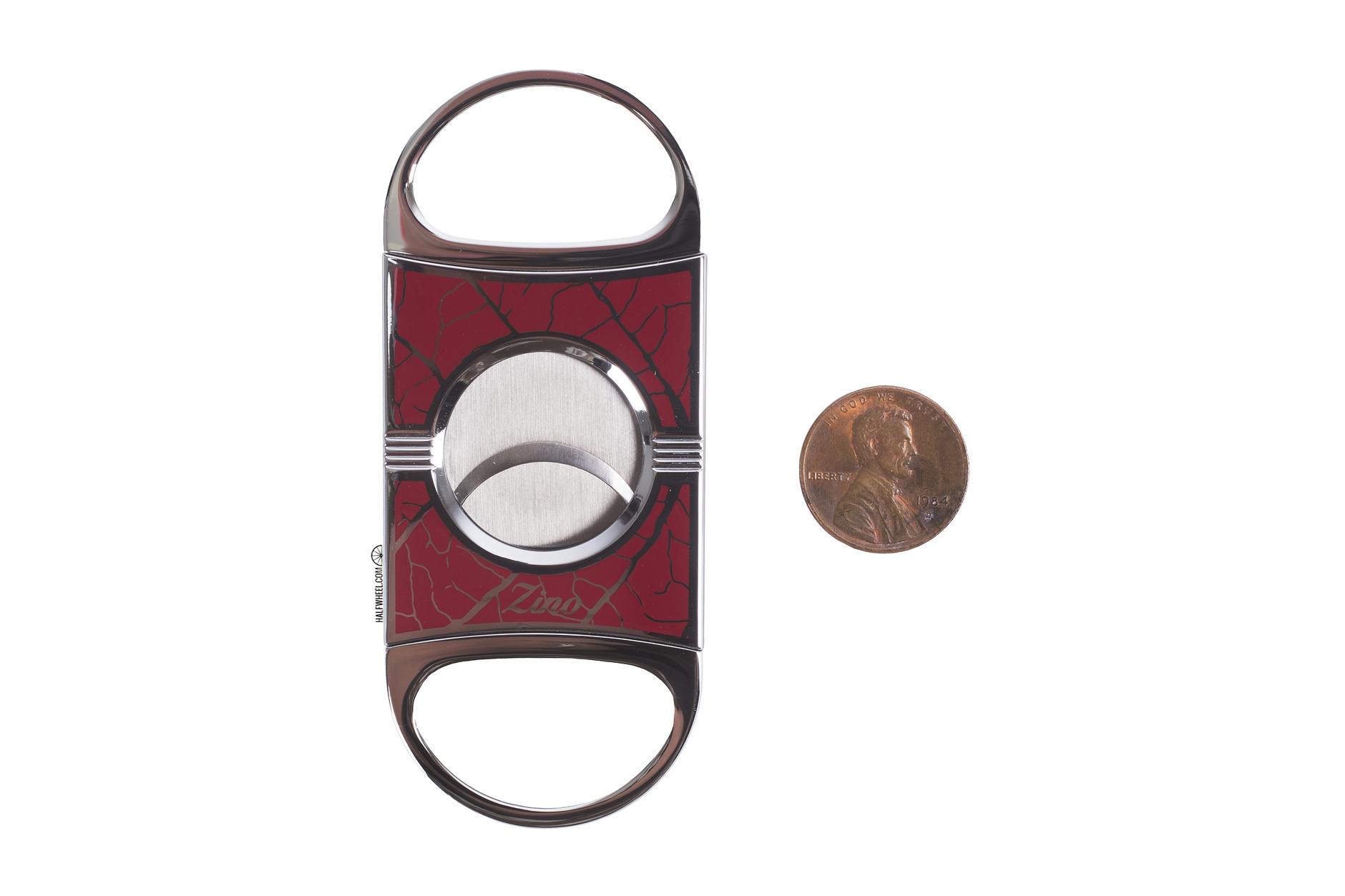 Physically, the exterior of the Zino Graphic Leaf Cutter is made up of zinc alloy, while the blades are stainless steel. Each cutter measures 1/6 inch in height, 3 5/12 inches in length and 1 1/6 inches wide while weighing 3 ounces. According to the product literature, the cutters can cut cigars up to 60 ring gauge. 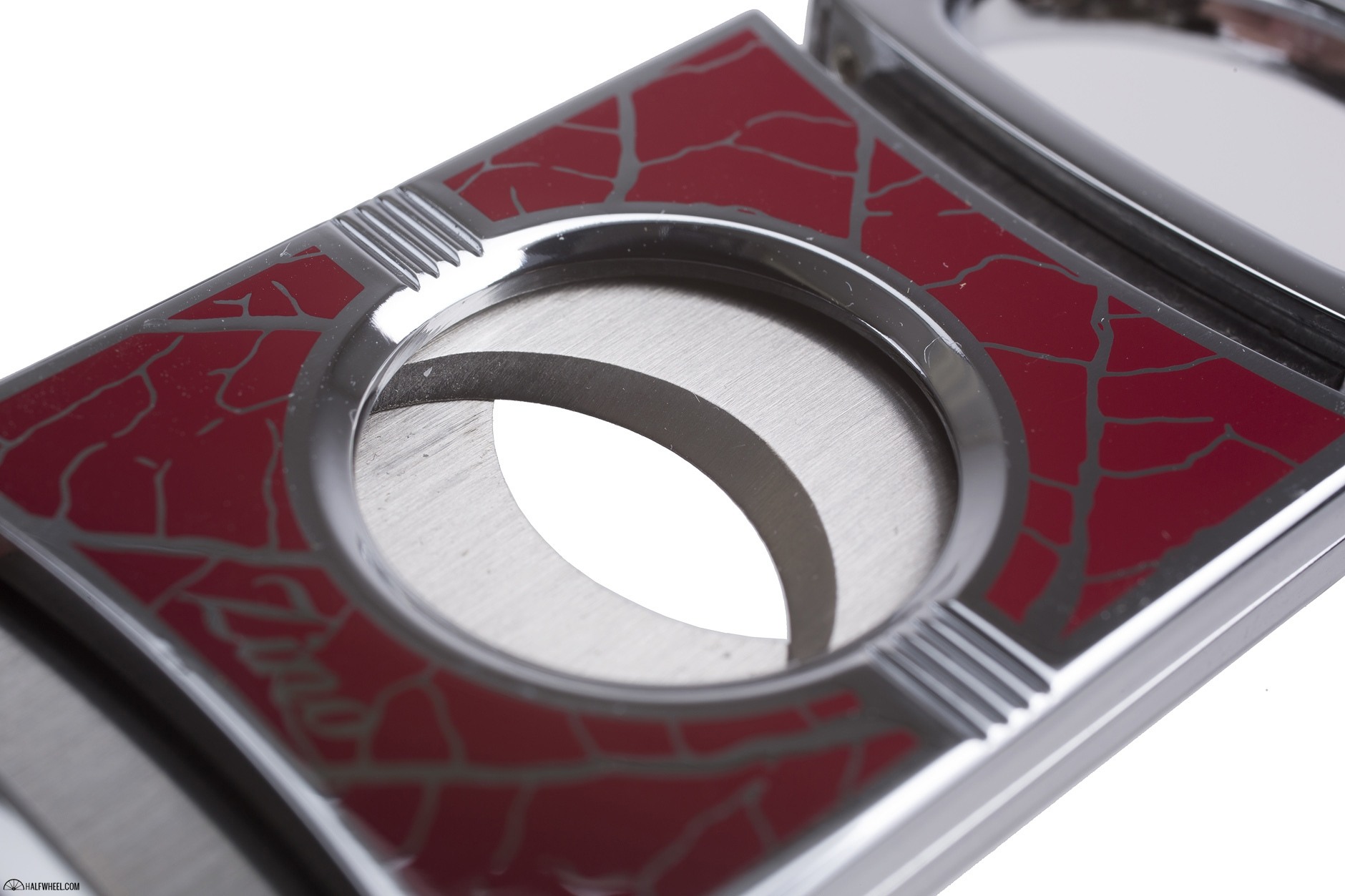 After a little less than two months of using the Zino Graphic Leaf Double Blade Cutter to cut almost every cigar I smoked–personally and for reviews–it has taken pretty much everything I have thrown at it with style and grace. The cutter is surprisingly heavy in the hand and has an extremely solid feel when you use it, which helps quite a bit with the actual cutting of the cigar. The operation of the cutter is fairly standard for a double bladed option: both blades smoothly and independently roll on their tracks, and although they do not give an audible click when they finish their trek, they do stay put for the most part. The blades have shown no signs of dulling, and although I have had some minor issues with the sharpness of the cut, it has been an infrequent problem.

Having used the cutter extensively, I can safely say that the advantages to the Zino Graphic Leaf cutter are numerous. First, the combination of the bright red accent and the tobacco leaf graphic is a killer visual combination, and really stands out when you are not using it. Secondly, unlike some other guillotine cutters whose blades have a tendency to become loose and start slipping after extended use, the blades on the Zino Graphic Leaf still remain tightly in place after you open and close them. Finally, the weight of the entire cutter does help with the operation, making it easier to cut the caps of the cigars. 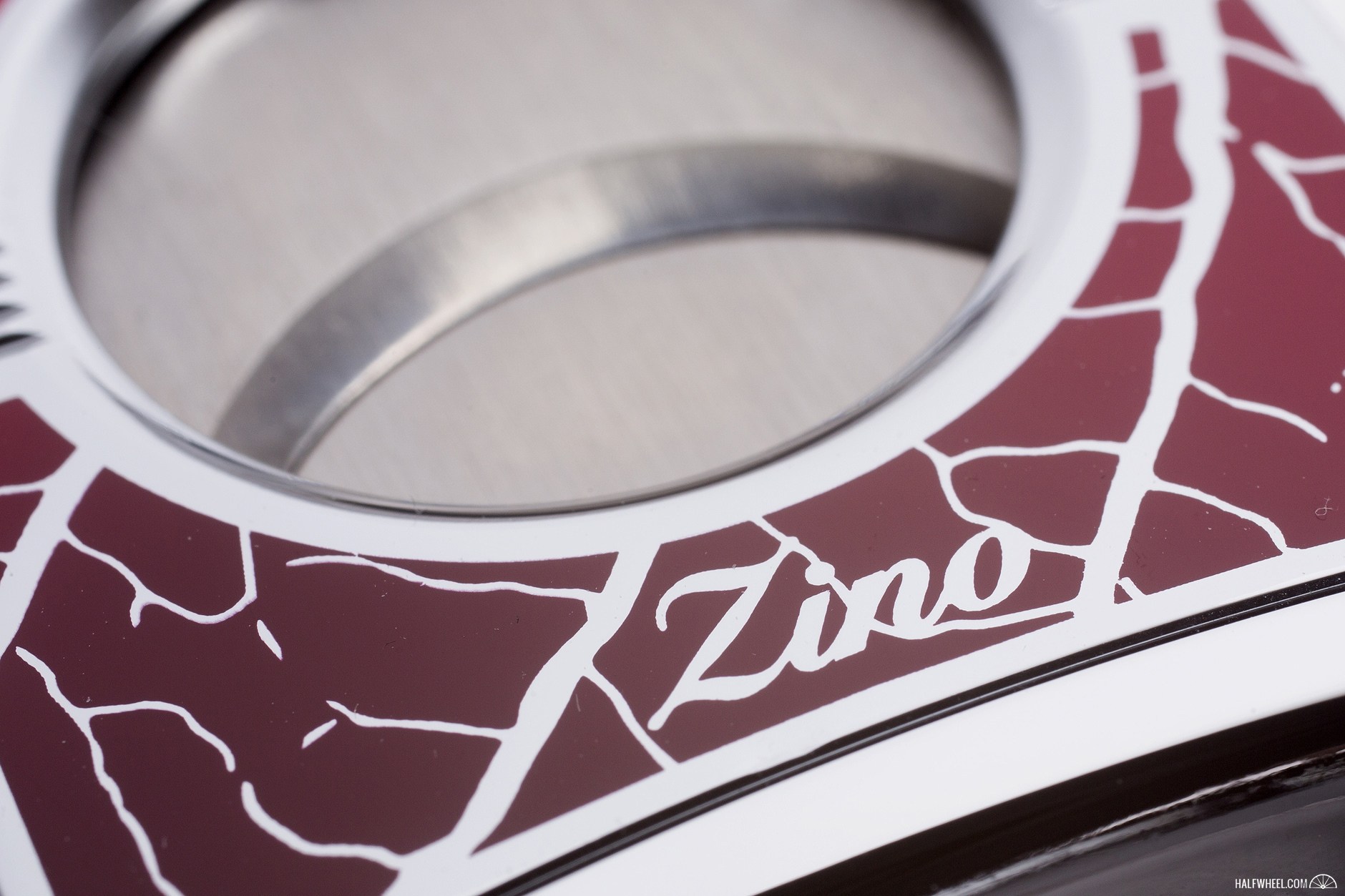 Having said the above, there are some issues with the Zino Graphic Leaf cutter as well. The $60 price tag is a bit hard to swallow when there are multiple double-bladed cutters on the market that cut cigars as well for less. In addition, the shiny exterior does tend to pick up dust and is a fingerprint magnet—something more noticeable on the grey side—and while they wipe off easily, it is still annoying to have to deal with on a continual basis. There’s also the size of the opening: while Davidoff says it will cut a 60 ring gauge cigar, they are just talking about snipping a bit off the cap, as a 60 ring gauge cigar is not fitting through the opening all the way. 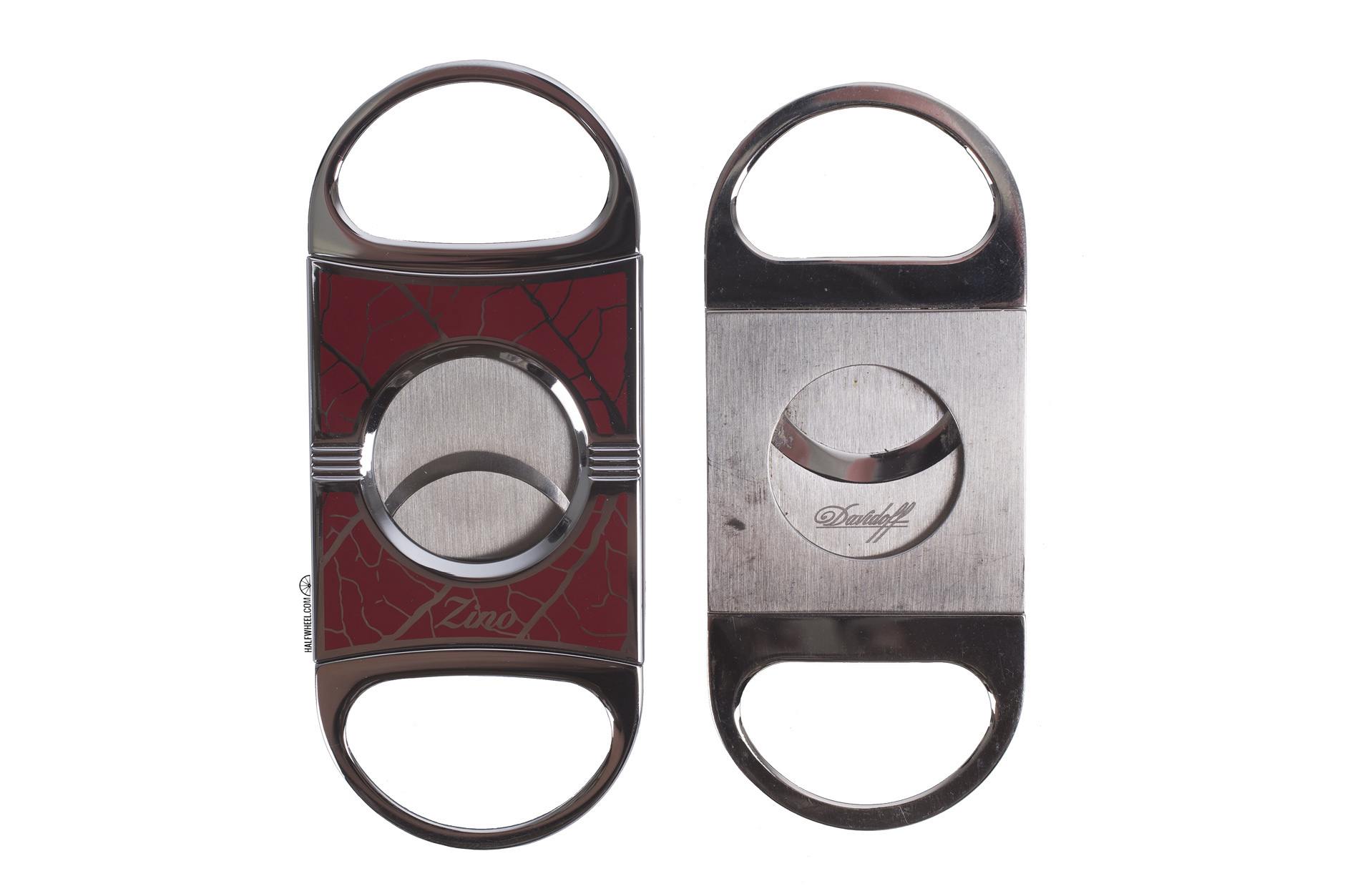 In terms of competition, there is a surprising lack of all-metal dual guillotine cutters in a traditional style on the market. Davidoff makes one, but the $330 cost will keep most people away. Prometheus used to sell one, although it’s no longer listed on its website. Drew Estate gives out one at its events, although it features a covered back and is not officially offered for sale. In addition, Davidoff’s own Zino sells a variety of traditional dual guillotine cutters, including the Zino Double Blade Metal Cutter ($210), which features a slightly more modern style on the traditional cutter.

In the end, the Zino Graphic Leaf Double Blade Cutter is about what I expected when I first saw it: a visually interesting and well-made cutter that works nicely doing what it is supposed to do. The blades are sharp—but far from the sharpest I have tested—and while there were some slight issues with the cuts every once in a while, they were never bad enough to cause any major problems. Yes, it looks great and feels quite nice in your hand when it is being used, but people who want something more substantial from a $60 cutter will probably be slightly disappointed.

Davidoff of Geneva USA advertises on halfwheel. The cutter for this review was purchased by halfwheel.