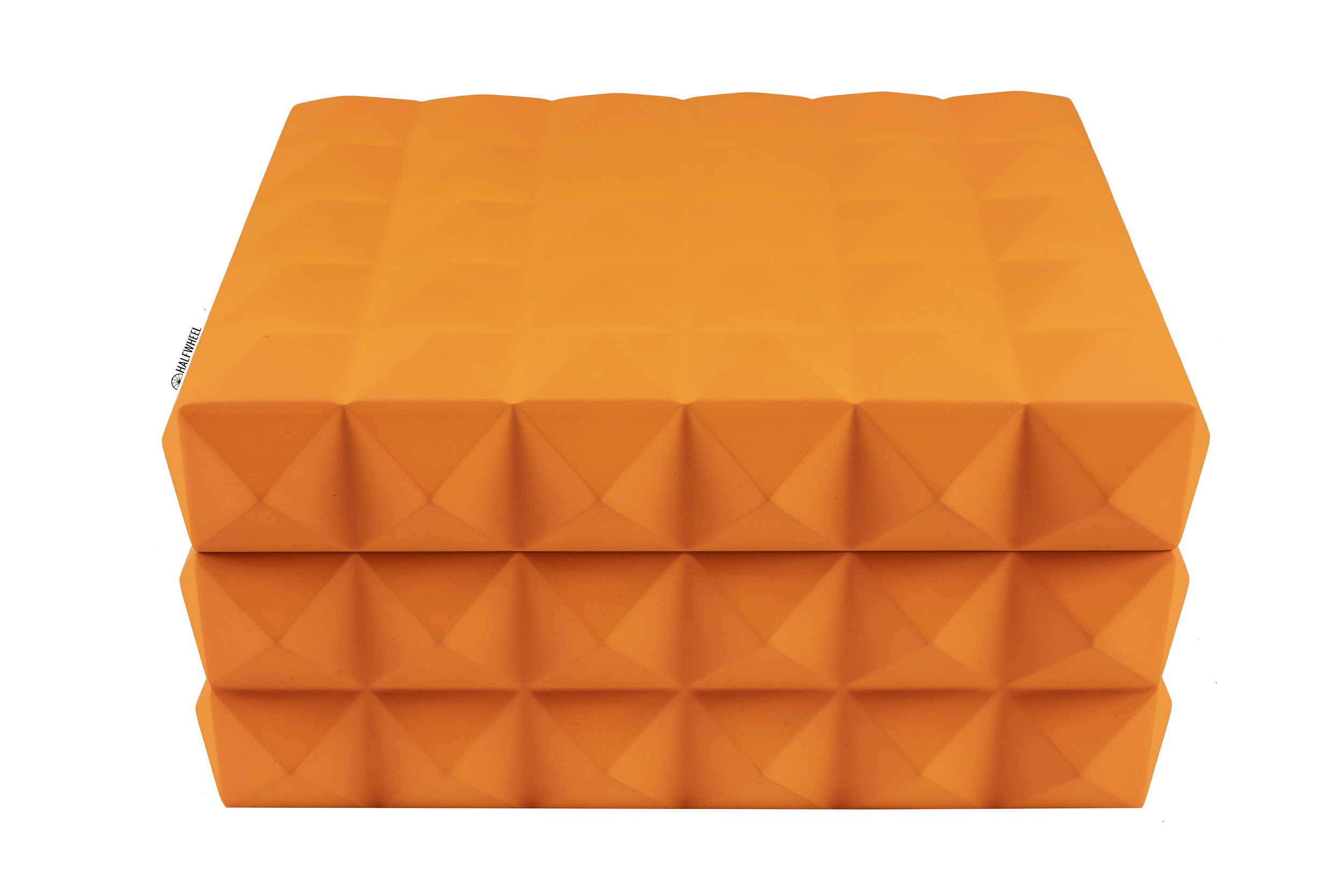 While most of the humidors included in this series of reviews have come from brands you have heard of, today’s review is from one you almost certainly have not.

That’s the name of the review. It comes from a brand called Yannabis, which also sells tobacco pipes, marijuana pipes and something that alerts you to whenever a door opens.

When I was picking out humidors for this series, I wanted to get something that seemed ambitious: one that is sold by a company I’ve never heard of, that looks too nice and is a bit larger than a humidor for $175 should be. After 20 minutes on both eBay and Amazon, this seemed like the most ambitious option.

As a reminder, this is a series of reviews of seven humidors that all meet the following qualifications: 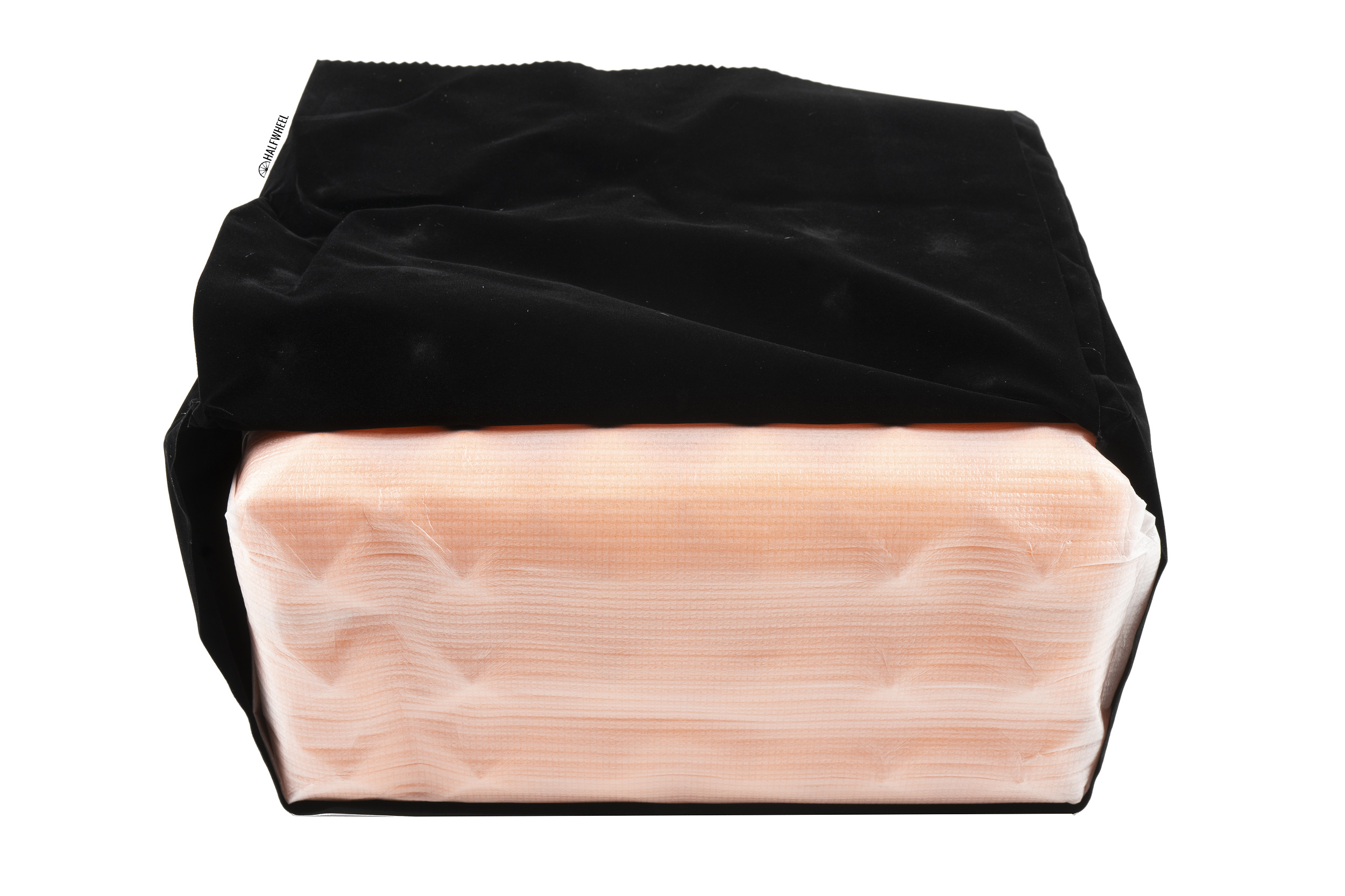 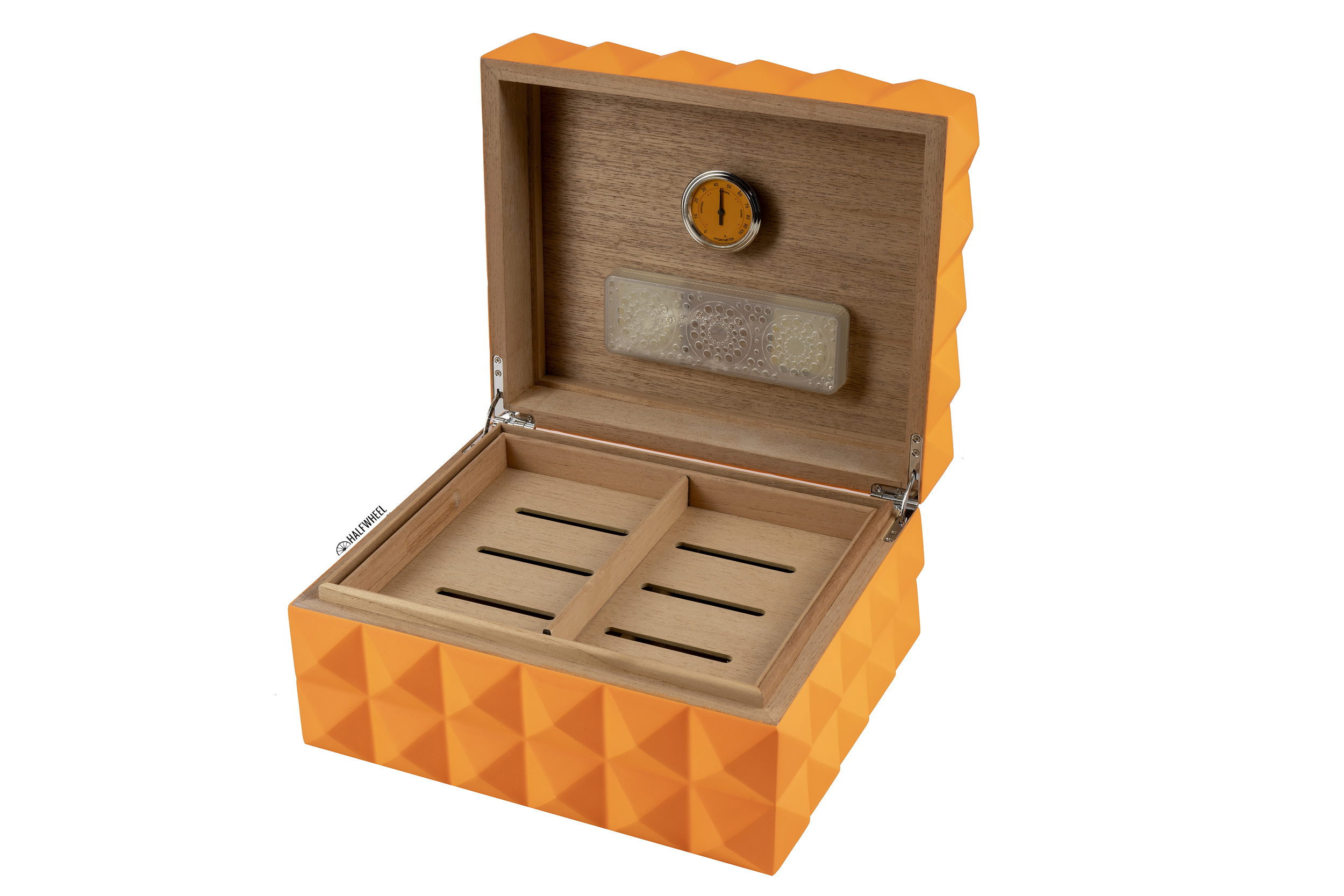 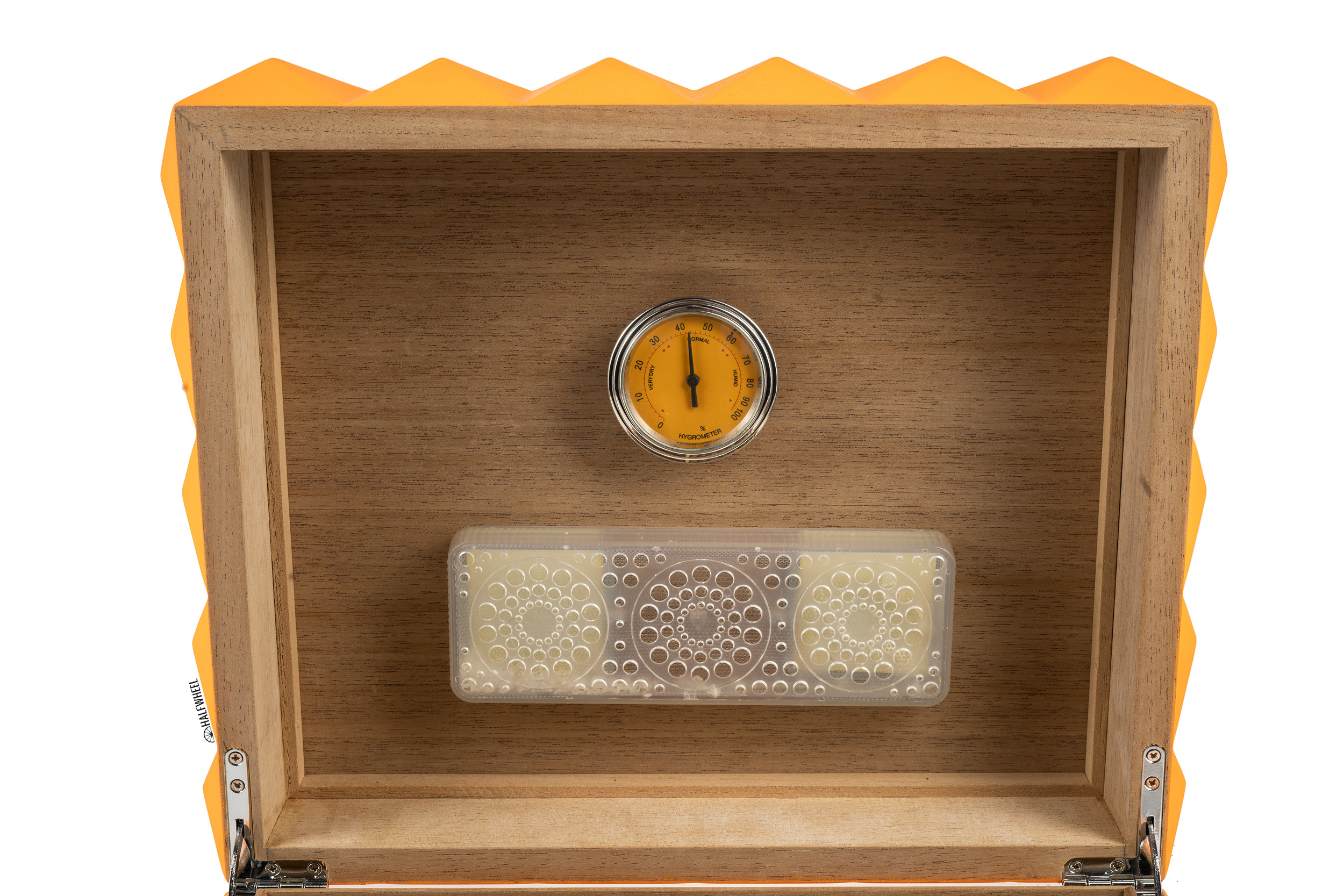 Just because you likely haven’t heard of Yannabis doesn’t mean you haven’t seen this humidor. It is the exact same exterior design as the smaller Colibri and Daniel Marshall Quasar humidor, which retailed for $1,500. Those two companies introduced the humidor in 2014 as part of Colibri’s expansive Quasar series, which is all based on a hobnail pattern based on the Colibri Molectric lighter from the 1960s. That pattern—which makes up the visible pyramid-like shapes—is the only thing on the outside of the humidor, covering all surfaces except the bottom. 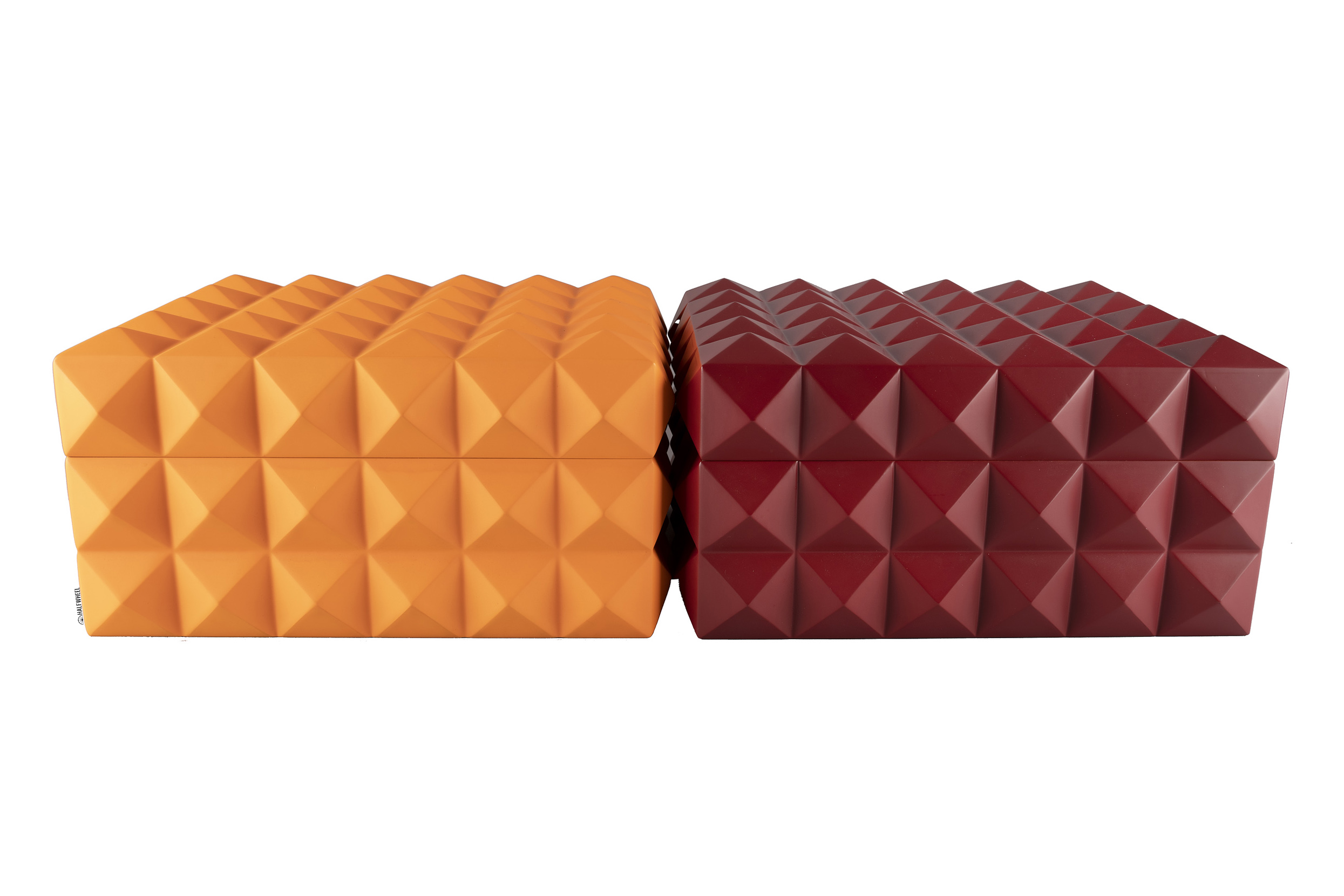 The Colibri is the frontrunner for my favorite humidor design of the last decade—at least from the outside—and so once I saw the knock-off was within the price range, I decided to buy the Yannabis.

There are some obvious differences, even from the outside. The now-discontinued Colibri was only offered in two colors, dark gray and matte red. The Yannabis is offered in black, silver, yellow and the orange I purchased. If you want to get very technical, I think the Colibri is just slightly longer, maybe a quarter of an inch. The Yannabis measures 13.25 inches x 11 x 7, though I’m not 100 percent confident in those measurements given the unique challenges of measuring the points. Brooks Whittington thinks that the tips of the pyramids on the Yannabis are a bit duller than the one’s on the Colibri, I’m inclined to agree with him though there is no way I could ever tell this unless the humidors are side-by-side.

The humidor is listed on Amazon for $179.99, but there’s a 20 percent off coupon at the moment which brings the price to $143.99. There seems to always be a coupon, though the amount changes.

I’m not 100 percent sure that the coupon is constantly available, but it seems like that’s the case, which is why I felt comfortable including this in this series. 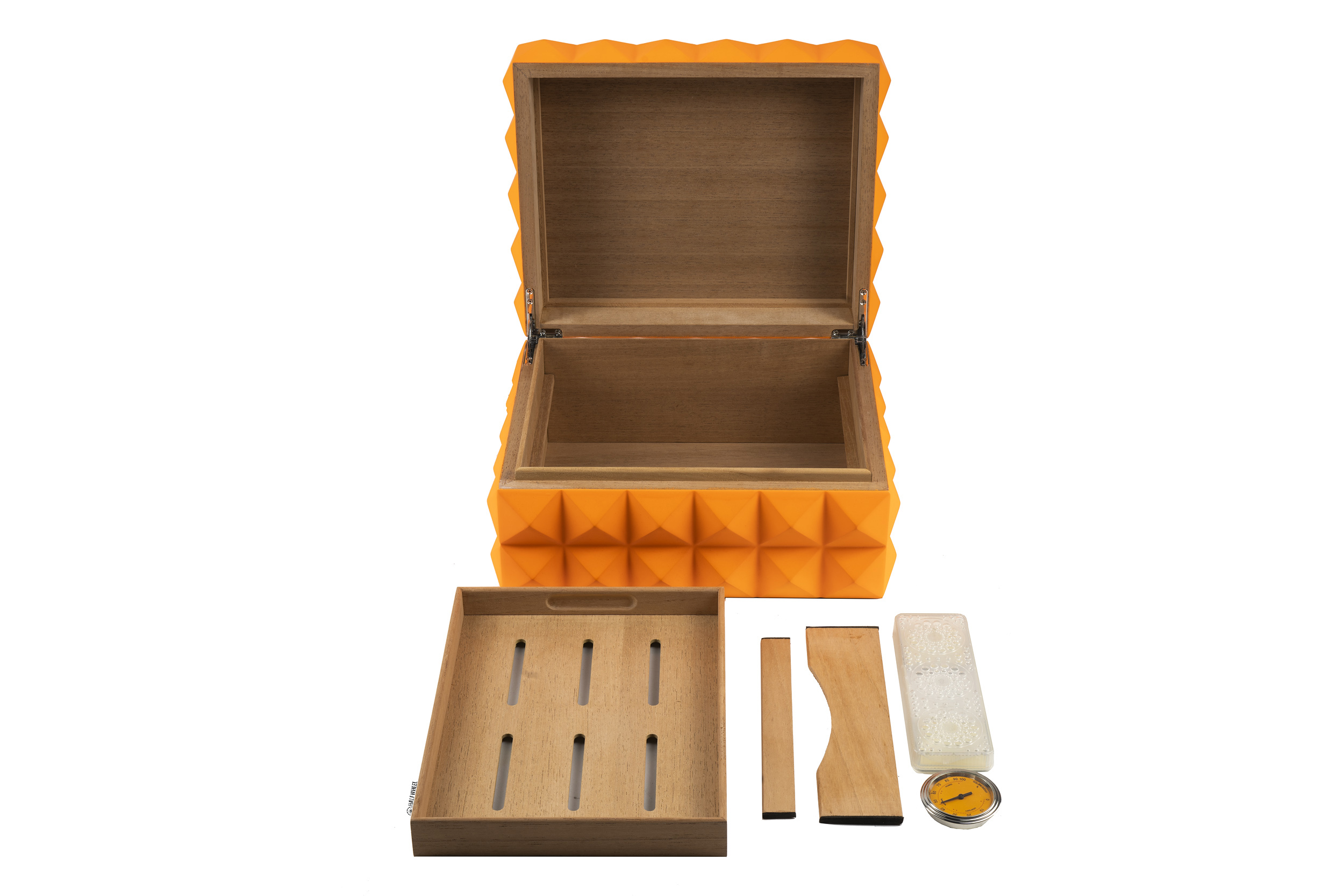 Super absorbent polymers are crystal-like substances that can absorb lots of water, sometimes as much as 300 times its weight. Over the course of a few minutes, the polymers absorb water and turn into a sloshy gel-like consistency that is mostly just water. Once they’ve absorbed the moisture, the polymers will release the water and eventually, if left in a dry environment, will transform back into the dry crystal-like state.

This is an alternative to the florists’ foam humidifiers, though the idea is pretty similar. Super absorbent polymers will release the humidity at very high rates—I use them to season humidors sometimes as opposed to just leaving open bowls of water—and while it’s a bit more of a high-tech solution than florists’ foam, the humidity still needs to be regulated.

A lot of the “gel humidifiers” that are on the market are super absorbent polymers that have been soaked in some sort of mixture, ofttimes distilled water and propylene glycol.

While I think there’s a debate about just how much better super absorbent polymers mixed with a solution are at specific humidification, in my experience the one clear advantage that the polymers have over florists’ foam is that they don’t develop visible mold.

HOW LARGE IS IT ON THE INSIDE

It measures 10.5 inches x 8.5 x 4.25 on the inside, 379.3 cubic inches. Per Humidor Discount’s humidor calculator, it should hold 84 robustos if optimized properly.

More than most humidors, there’s quite a bit of space in the lid, I’m guessing another .75 inches or so. How usable that space is will depend on the pile of cigars you want to stack on the tray, but it’s there for the daring. That being said, there is a negligible amount of space that is lost because of the two strips of wood that hold up the tray.

Given that I have seven humidors to compare against one another, I decided to come up with a testing process for all of them. I wanted to test the humidors both as they are sold and with some of the variables removed so I could test the quality of the boxes themselves.

The Yannabis started at 59.7 relative humidity and finished at 86.4 percent, though it peaked a little bit higher. 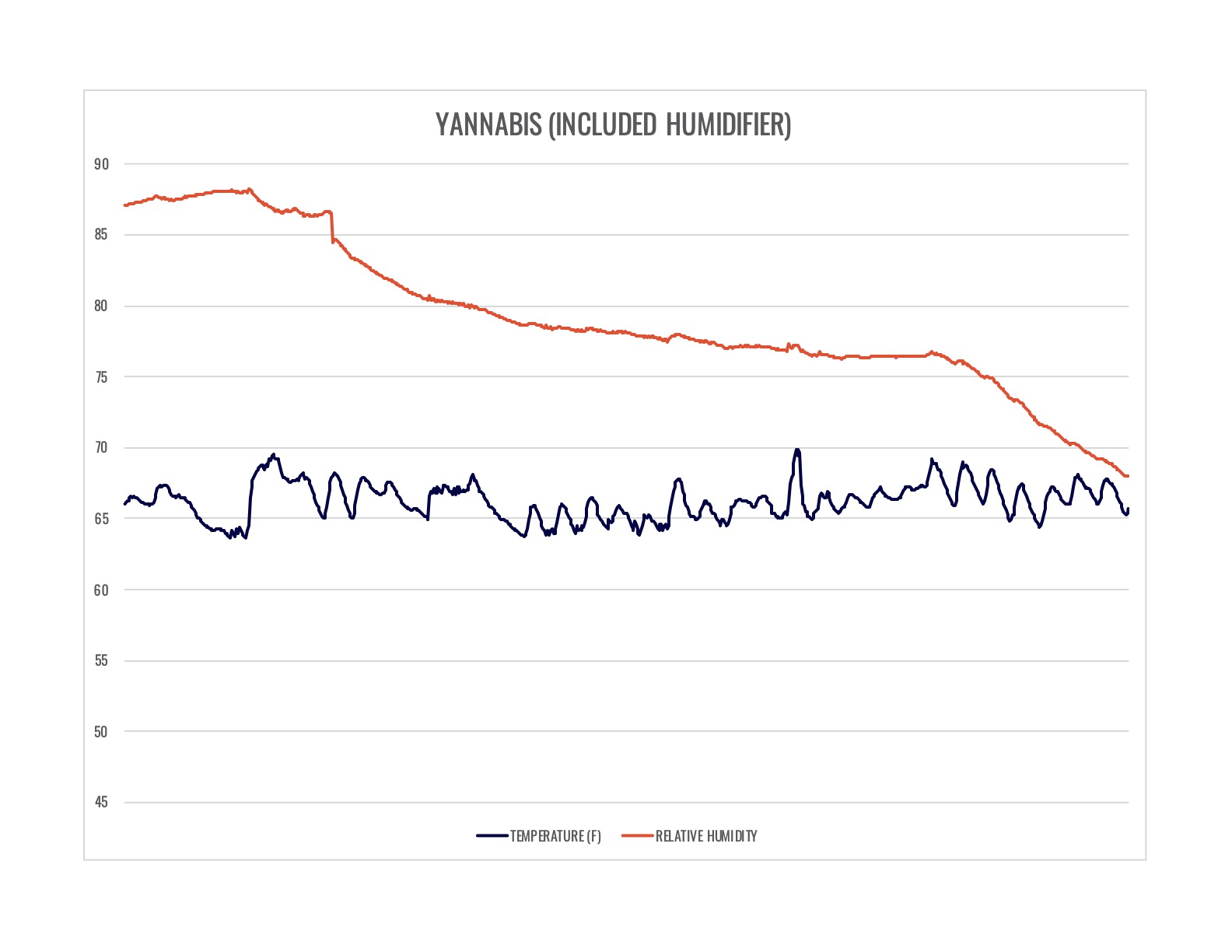 Relative humidity increased and stayed above the 86 percent mark for the first week. Given where the seasoning finished, it’s not surprising given that adding humidity—even at a lower rate than the humidor was at—is only going to increase the humidity. It took just over three weeks for the humidity to dip below 75 percent, though by the end the humidor was at 68.

One of the complications with using super absorbent polymers is that you can’t add the same volume of water to a container as you should given how the polymers expand. In very simple terms, if you took an empty 12-ounce glass and put an ounce of super absorbent polymers in it and filled it with 11-ounces of water, you would end up with a massive mess because the polymers expand and create air pockets, which means they would spill out of a full glass.

This volume limitation is a similar, albeit less visually striking, problem that exists with florists’ foam humidifiers. Regardless, it means that in the case of the Yannabis, the humidifier is likely only able to absorb a couple of ounces of water at most. 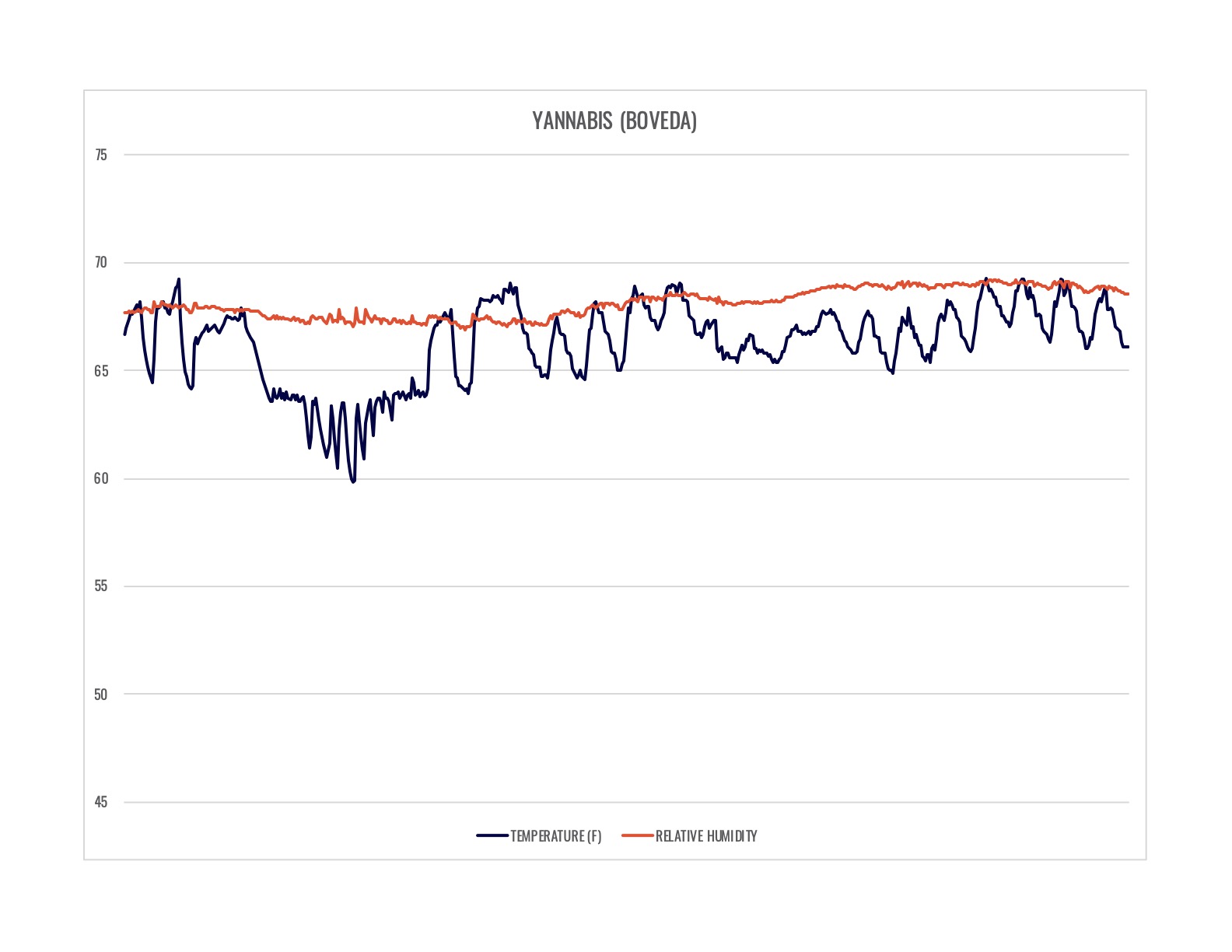 The Bovedas did their job.

For those wondering, the three Bovedas started at 185g and finished at 148g. As mentioned last time, I’m still not sure what to make of this test because all of the humidors have performed pretty similarly. The Yannabis started at 68.6 percent relative humidity and finished at 58.5. 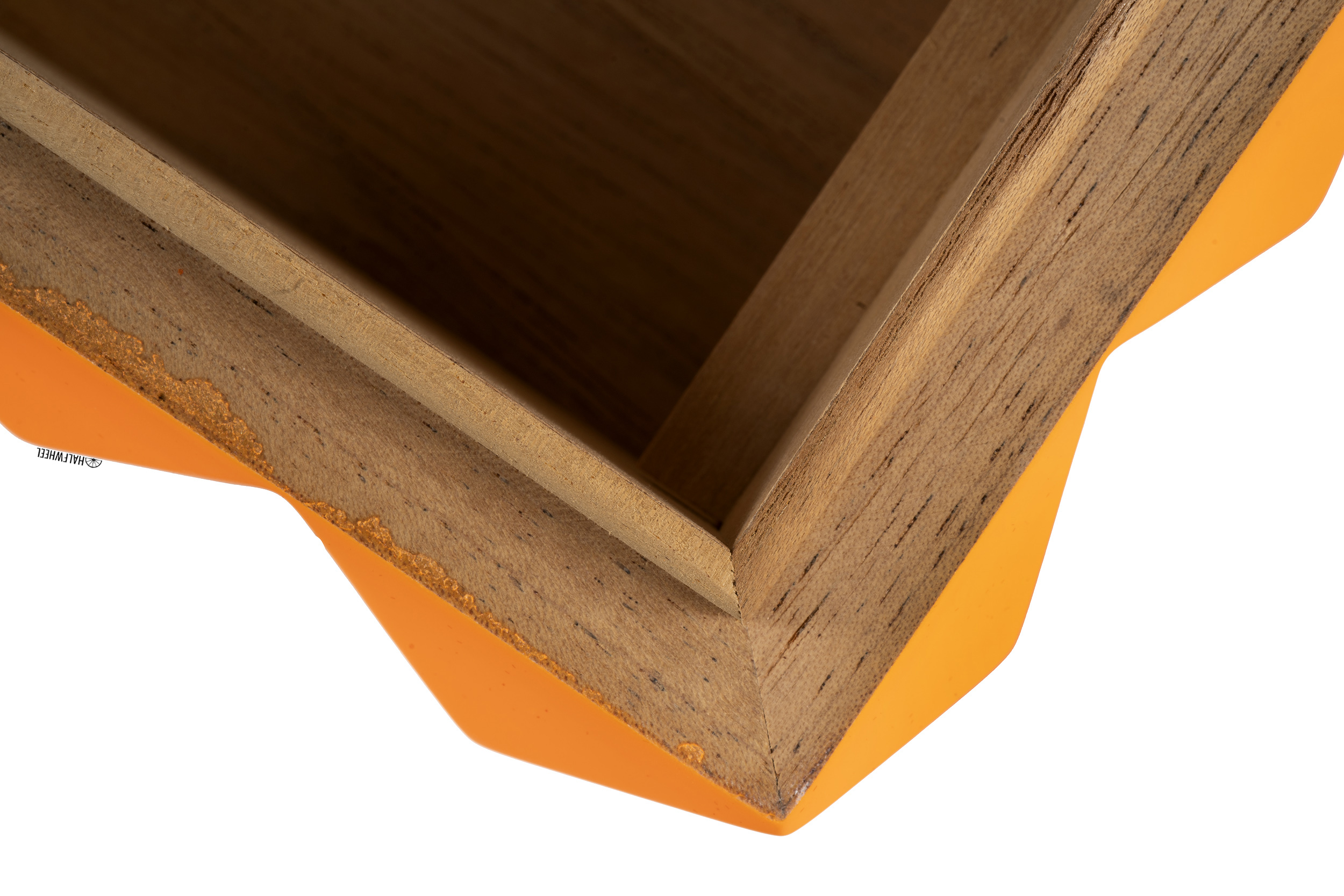 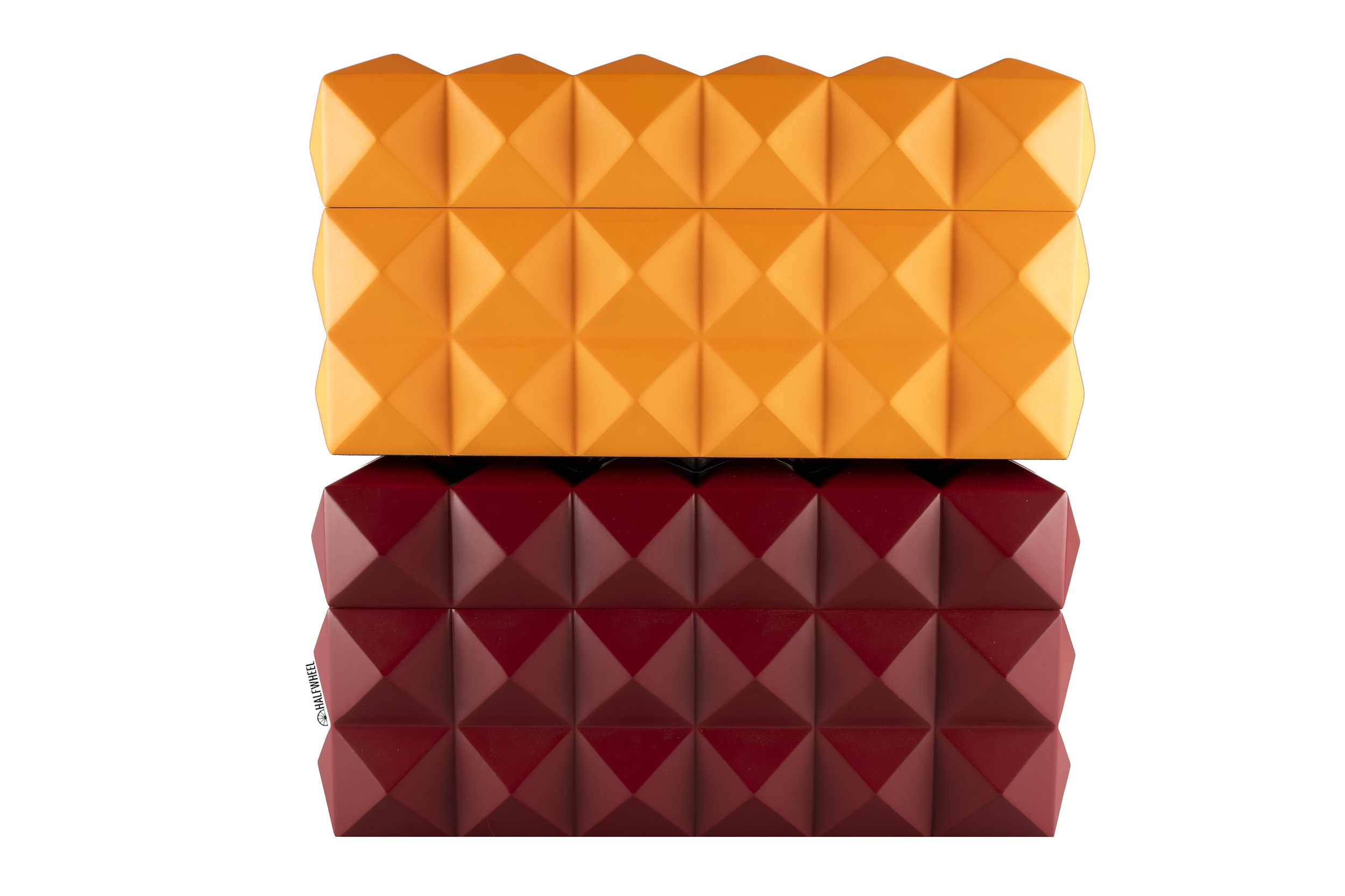 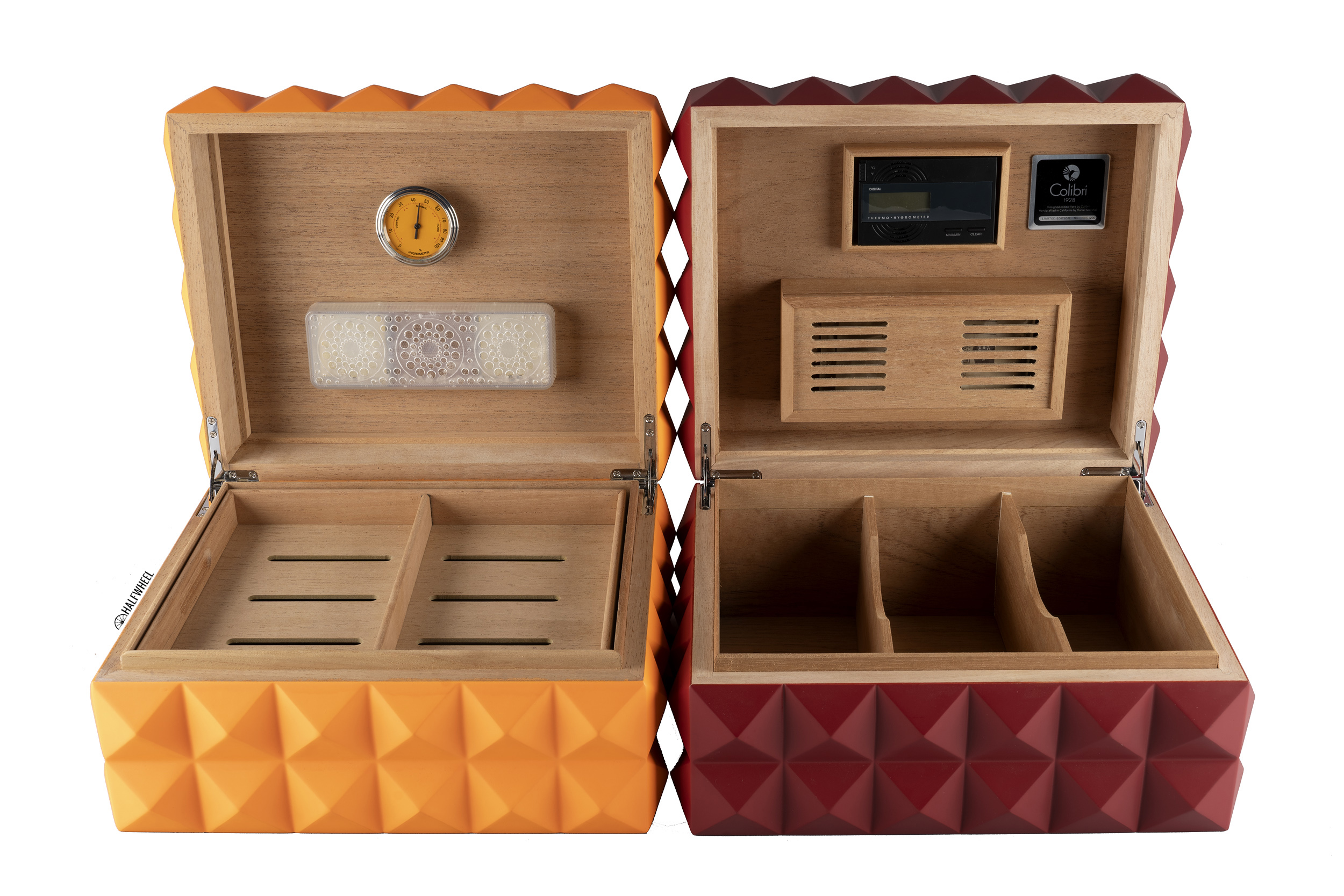 The direct competitor to the $160 Yannabis humidor is a discontinued $1,500 humidor. That was the price of the Colibri Quasar Small humidor, though good luck finding one. It was released in 2015 and limited to 400 units across two colors. The build quality—particularly on the inside—of the Colibri is better. The joints for the wood are intricate and more visible, the wood has a more consistent color and there’s some additional pieces that are included for a better fit and finish. That being said, I don’t like the lids of Daniel Marshall humidors because of the aforementioned humidifier cover, which wastes a lot of space in my opinion. The other big difference is that the Yannabis has a tray and a single divider in its bottom area, whereas the Colibri has two dividers but no tray.

If the humidors were the same price and one wasn’t knocking off the other, I think I would take the Yannabis. It’s not built as nice, but it is still pretty good. For me, the wooden humidifier cover is just a glaring problem and I’d rather have a more functional lid even if it means sacrificing the fit and finish.

It pains me to write, “buy this humidor that blatantly knocked off the work of someone that I know,” but if this is just about the product, it’s an unequivocal yes. It’s a good humidor, or at least the one we purchased is. My only concern with the product itself is whether the next batch of these humidors might be the same as the one I got. But if I’ve learned anything in this series of reviews, it’s not like the mainstream companies selling humidors have done much in the way of quality control.