At the 2014 IPCPR Convention & Trade Show, XIKAR released the VX Key Chain ($44.99), which as the name implies, takes the company’s popular VX Metal V-Cutter and puts it on a keychain.

There are many similarities between the original VX V-Cutter and the newer keychain model: the cast aluminum body is the same concave shape, the blade is identical, the three color choices for the VX Key Chain are three finishes offered on the regular VX, it has the same warranty, etc. There’s some good that comes along with using the tried and tested design.

In my review of the original VX, I explained the advantages XIKAR’s v-cutters had over most the competition, something that carries over to the newer model. 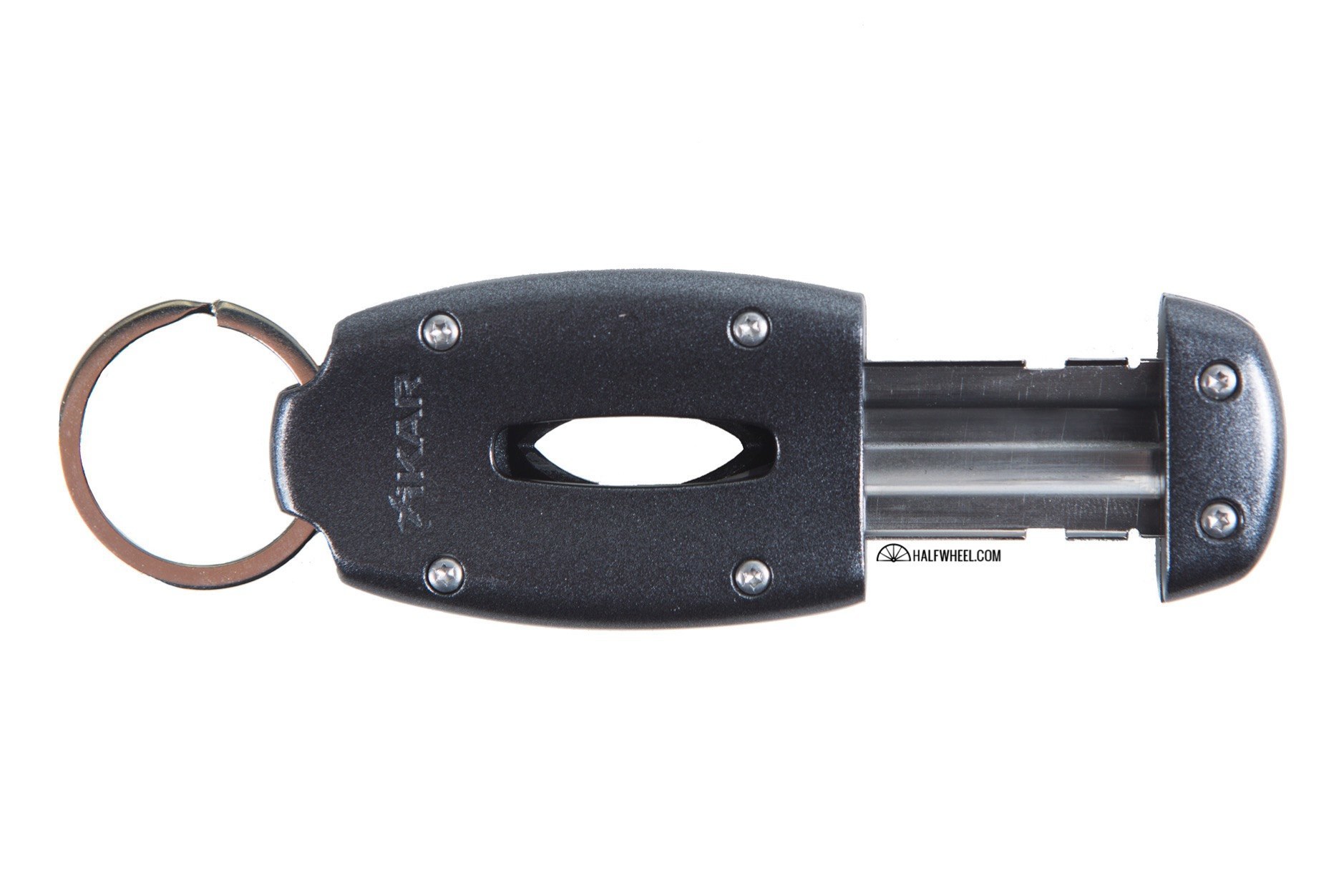 The concave indention on the back of the cutter that allows you to lay your cigar in the back side of the cutter and then lay the cutter, facing upside down, on a flat surface. As with the original VX V-Cutter this means the next time you are in a place where there is not a proper ashtray, your cigar won’t have to sit hanging off of a table. Of course, with the cutter actually on a key ring with other keys, it can be a bit awkward to put a cigar in the indention, but it can be done. XIKAR placed the key ring on the cutter horizontally, which give the VX Key Chain a much better chance of lying down flat. 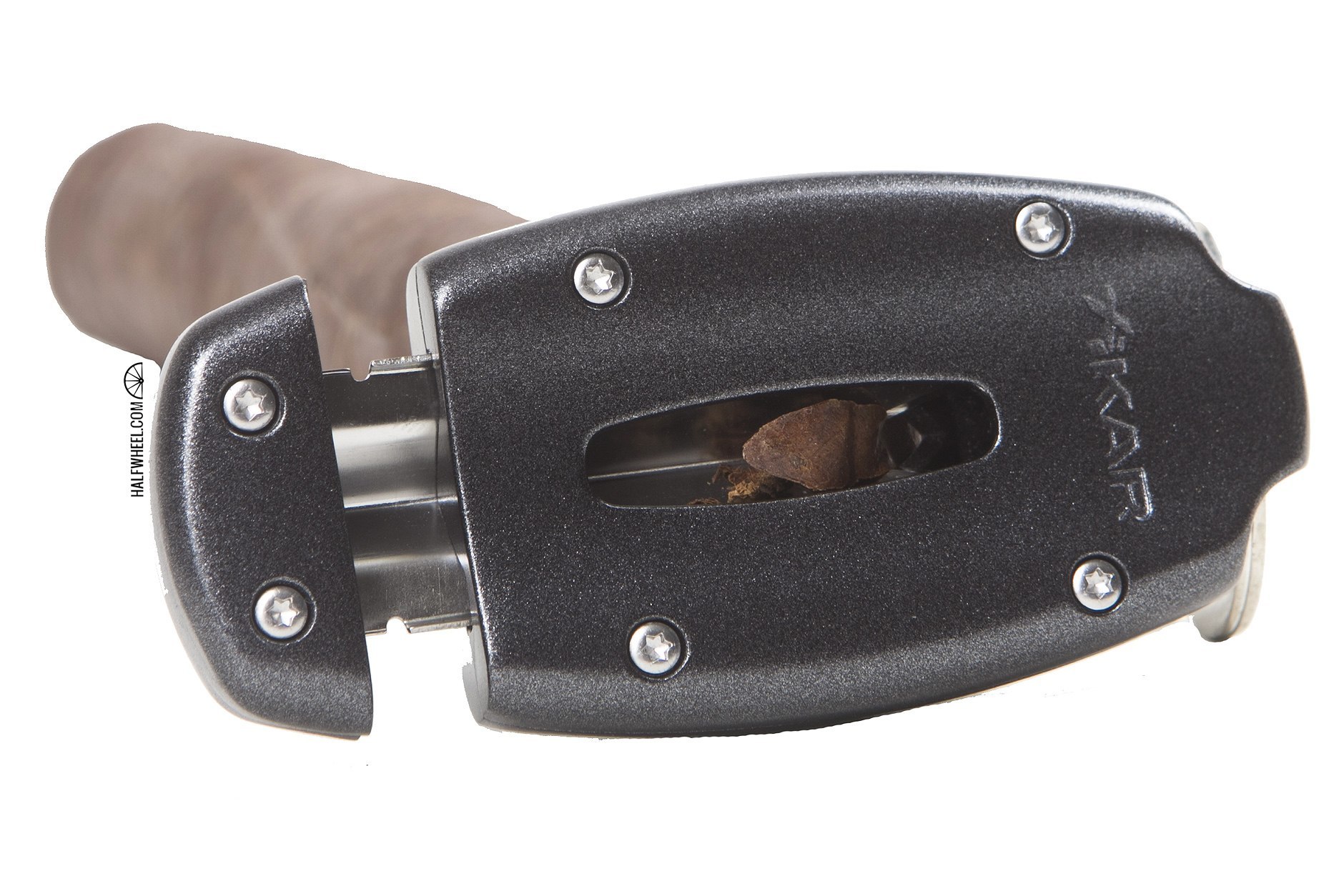 There are many things XIKAR made smaller about the cutter, but fortunately, it left the opening for the end of your cigar at the same. XIKAR advertises up to a 64 ring gauge cigar for both the original VX V-Cutter and the new VX Key Chain—something I find both are capable of handling. 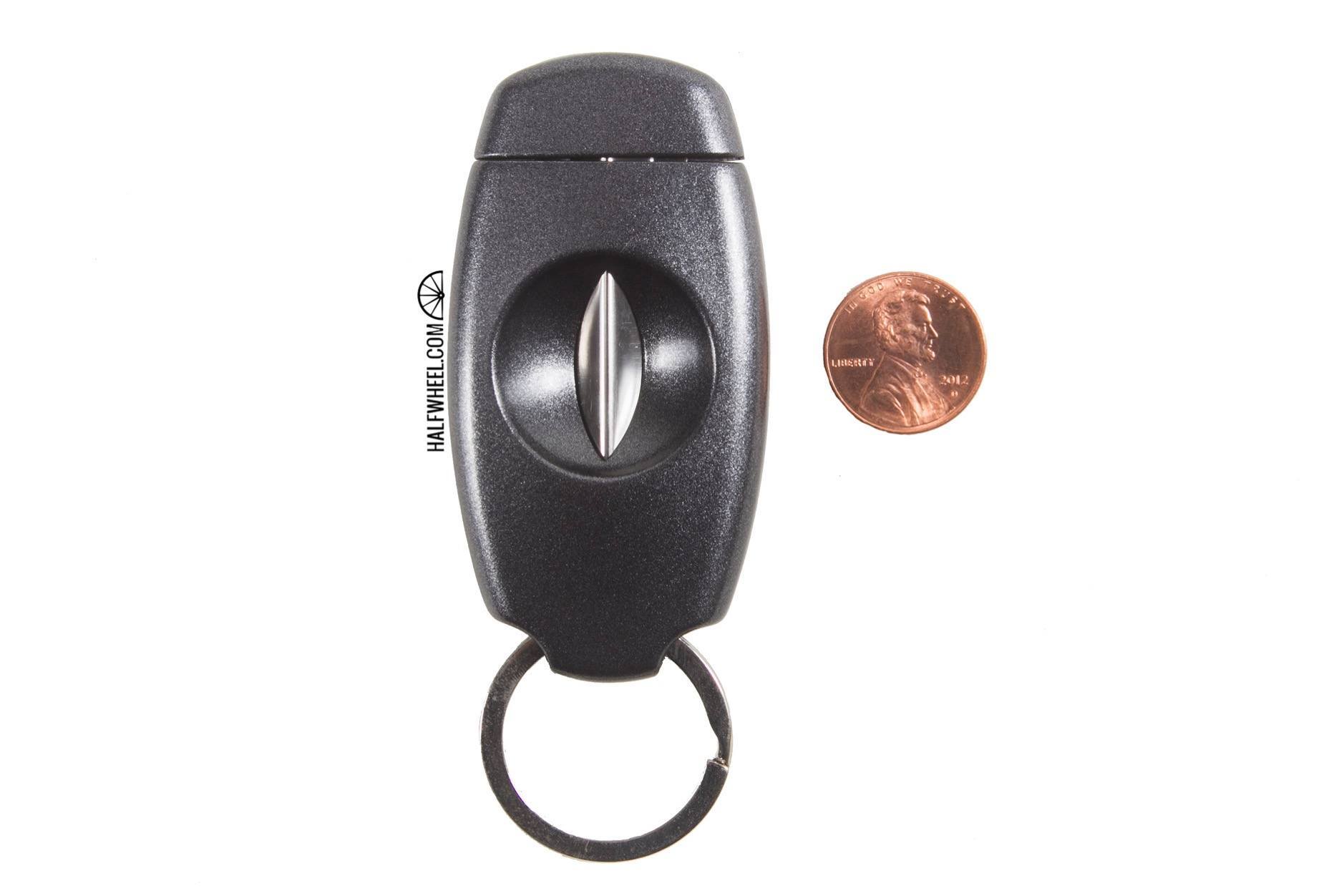 While the VX Key Chain is still larger than most keys—similar in size to a larger car key fob—XIKAR had to trim quite a bit off the original v-cutter I’ve come to love. The most notable thing to go is the finger holes on both sides. Instead, the key ring loop serves a similar purpose on one side while a knob on the other end extends out to achieve the actual cut. 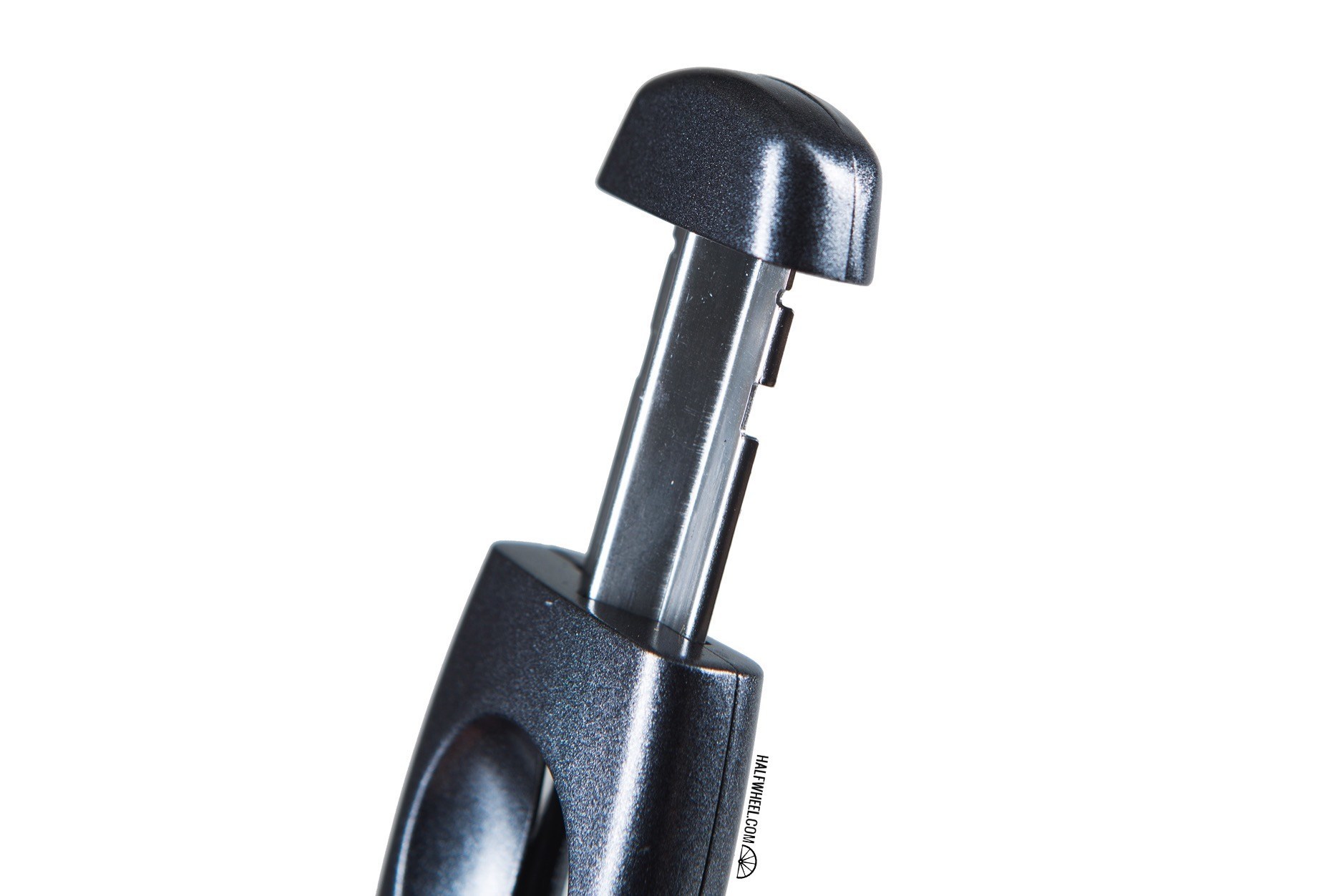 The cutting action is smooth and simple, never catching or causing an issue. While the blade does not “click” in place when it reaches the beginning or end of its trip as on the Colibri V-Cut, it does have a locking mechanism has been added to the tracks of the blades themselves to prevent the cutter from accidentally sliding open and it works well.

One of the main things I was worried about was the fact that the blade would become loose over time and with extended use, although that has not happened with any of the other XIKAR V-Cutters I have used. Thankfully, the locking mechanism works like a charm, and even after one and a half months, the blade stays right where I put it, every time. In fact, it does not even wiggle when it is fully extended, which surprised me a bit. Having said the above, there are some obvious issues with the XIKAR VX Key Chain Cutter, some of which are carryovers from the original VX. The first and most glaring problem is the fact that this cutter that has been designed for a keychain, while retaining the somewhat delicate finishes found on the original VX. After a couple of weeks, my cutter was looking pretty bad. Of course, this problem is not unique to the VX Key Chain, and in fact, is prevalent in nearly every XIKAR cutter that I have used, albeit in differing amounts.[ref]Charlie Minato tells me his bead blast MTX scissors are immune to this.[/ref]

Then there’s not having designated finger holes. The new cutter does take some time to get used to, as you have to use a bit more pressure than you might expect in order to push the blade through the cap. The fact that you have to essentially hold your keys when cutting the cigar is awkward at first, but I got used to it fairly quickly and was not even thinking about it after the fifth time I cut a cigar. 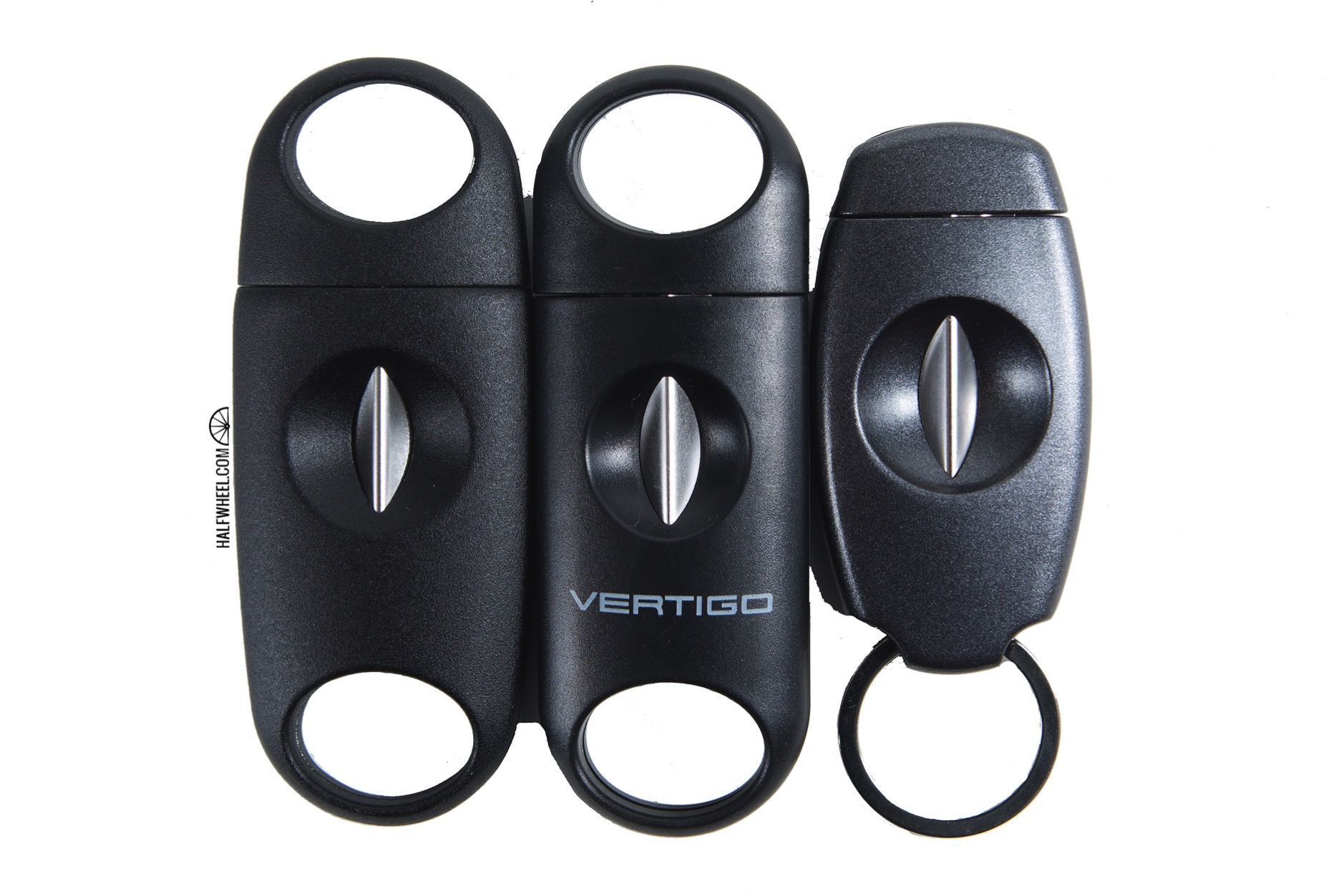 Compared to the XIKAR VX V-Cutter ($54.99/$64.99),[ref]You can find the regular VX much cheaper.[/ref] the XIKAR VX Key Chain is smaller, cheaper, easier to carry but sold in fewer finishes. There is also no doubt that the XV is easier to use, but once you get the hang of the knob on the end, the cuts are just as clean and just as the original.

Another competitor, the Colibri V-Cut ($30) is built like a tank with a much more modern design as well as a more solid feel overall, the XIKAR VX Key Chain is significantly lighter and actually features a slightly sharper blade. Having used all three of them extensively, I would put the XIKAR cutters first, and I have put away my beloved VX in favor of the VX Key Chain based almost solely on the convenience factor.

XIKAR does make other cutters that can be put on key chains, including the MTX Multi-Tool, 7mm Twist Punch, 11mm Twist Punch and its 9mm Pull Punch, but has not yet released a traditional guillotine cutter with the same option.

As with all XIKAR products, the XIKAR VX Keychain comes with a lifetime warranty. This means that if the cutter is no longer working to your desired performance, take it to a local XIKAR retailer and they should swap it out with a new one if it’s in stock. Alternatively, you can send it to the company who usually returns the products in less than two weeks.

I have to say, after using the XIKAR VX Key Chain for almost every cigar I smoked for over a month and a half, it has replaced my favorite VX V-Cutter as my main cutter. Yes, there are some minor issues—the smaller size and lack of finger holes makes it a bit harder to cut a cigar, and the exterior finish looks like it has been through a war zone even after short time—but the fact that I have it everywhere I go on my key chain more than makes up for it. Overall, an excellent idea that XIKAR implemented very well. Now, I just need the company to put a smaller Allume lighter onto a key chain.