If you’ve shopped for a XIKAR product in the last year or so, you’ve undoubtedly come across the phrase high performance. It’s a pair of words that have been attached to several XIKAR accessories, either directly or by the abbreviation HP, while it has also been a banner for several other products.

While not technically part of the company’s High Performance collection, XIKAR announced a new lighter in May 2017 that sought to merge high performance with a seemingly incongruous term: value. XIKAR has never been a company that touted having low-cost products, but the Linea’s $29.99 MSRP landed it right at the low end of its offerings, on par with the Stratosphere, Flash and Tech. The company also refers to it as an “entry level” lighter.

To further illustrate its positioning, it’s one of the few XIKAR lighters designed to be displayed at retail in a bulk box, which you can see from the 2017 IPCPR Convention & Trade Show, where it made its full debut. While it comes with the traditional black XIKAR box when purchased, it is displayed in 12-count boxes that feature three of each of the four colors.

It’s shockingly similar in design to another single-flame lighter already in the XIKAR portfolio, the Cirro, which was launched in 2014. That lighter is designed for use at elevations up to 12,000 feet above sea level, and as such comes with a higher $49.99 MSRP. One easy way to tell the difference between the two is that the Cirro has three air vents underneath the flame, while the Linea has two. There has not been a statement made about how the Linea performs at elevation.

While I appreciate a well-designed and expensive lighter as much as the next person, as a regular cigar smoker I find myself more intrigued by the pursuit of reliable performance at an affordable cost, which is why the XIKAR Linea caught my attention. 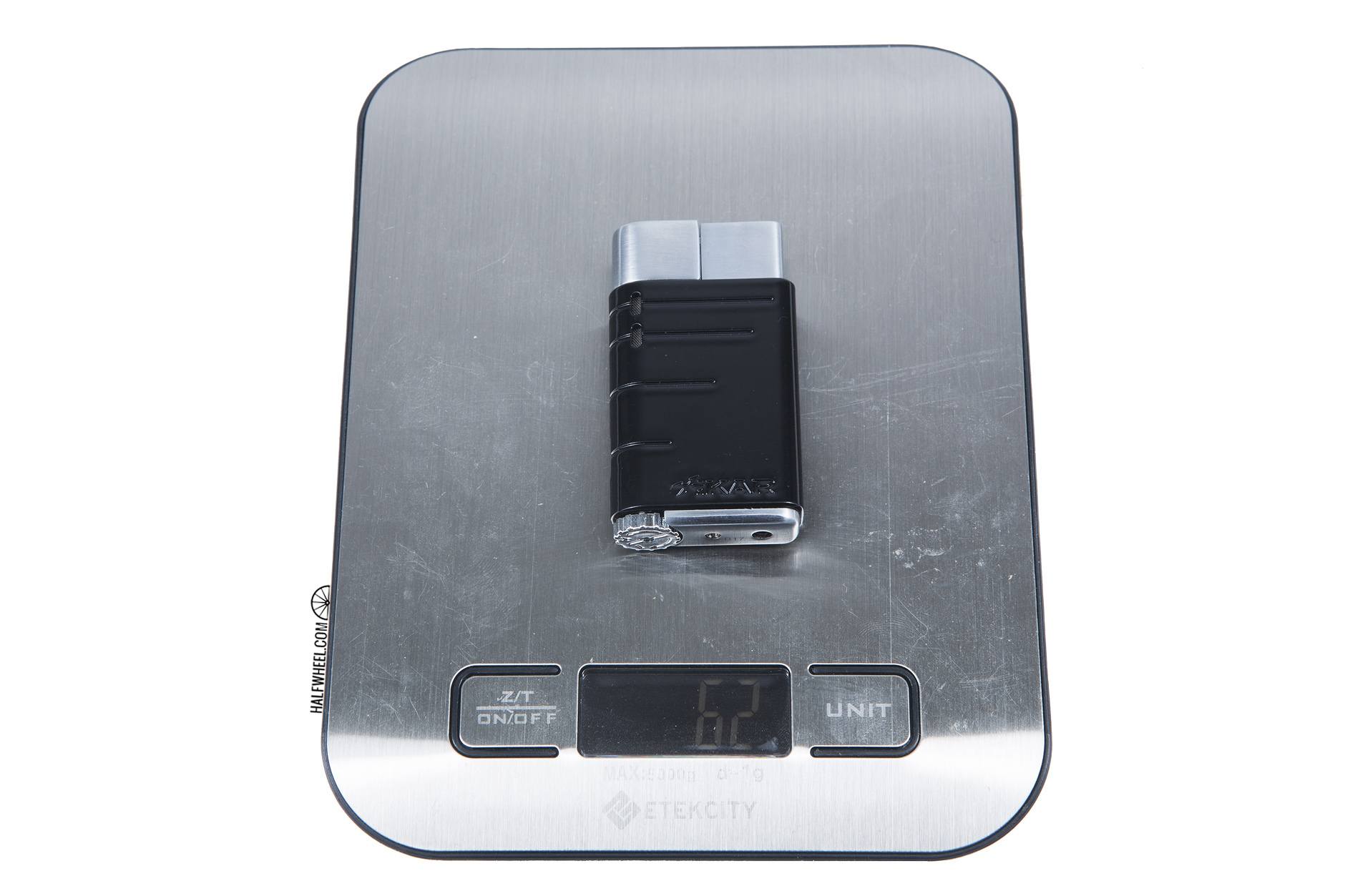 One of the first things that struck me about the XIKAR Linea when I took it out of the box was how light it was, at least in relation to its size and how hefty it would appear to be. Filled up on my scale, the Linea weighs in at 2.3-ounces (66g) and measures 2 7/16 inches tall, 1 5/16 inches wide and 7/16 of an inch thick, a size that is compact yet doesn’t disappear into the hand as some other single flames feel like they do. Yet the plastic case immediately signals where some of the cost and weight savings can be traced, and the lighter’s composition is immediately discernible via some tactile interaction.

Using the XIKAR Linea is quite simple and intuitive, as it fits snugly into the hand, with my thumb depressing the button that starts the single action ignition, a three-fold function that lifts the lid, starts the flow of butane and firing the initial spark. As with any lighter with such a design, I find it helpful to slow down the ignition process just a bit, getting the butane flowing ahead of the spark so as to make sure the Linea lights without issue. 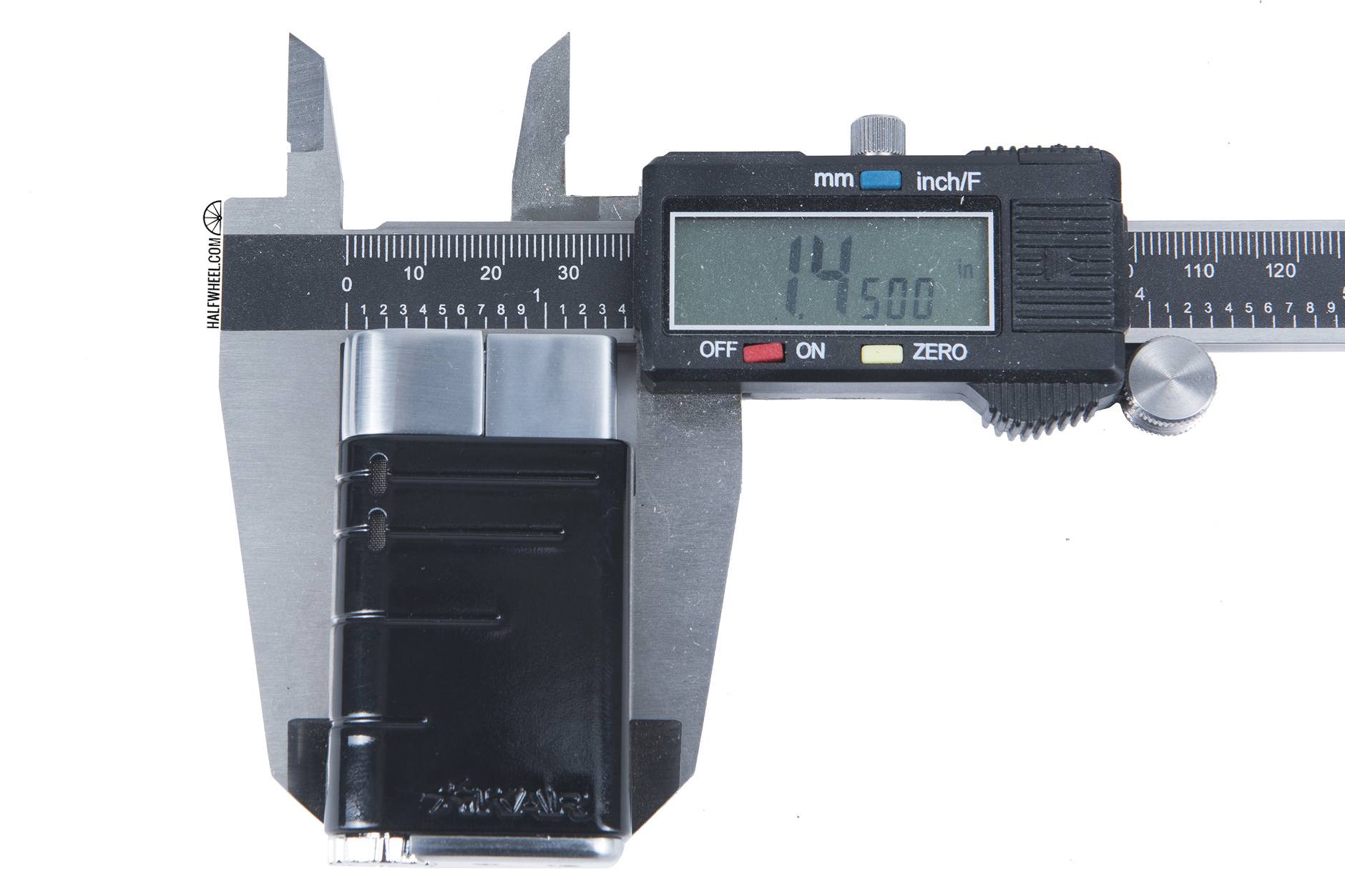 To keep the lighter burning you must keep your thumb depressed on the ignition—nothing new there—while releasing it stops the flow of butane and closes the lid.

The flame of the XIKAR Linea is both beautiful and effective if a touch too audible; the incredibly slender and almost needle-sharp stream of fire that the lighter offers is one of the best I can recall seeing, reminiscent of the Rocky Patel Laser Lighter I reviewed in February 2015. It’s accurate, unwavering, and an incredibly precise way to light a cigar. Best of all, it’s proof that multiple jets—such as what is found on the XIKAR HP4—are not needed to toast a cigar, and if anything are overkill that run the risk of scorching the tobacco. 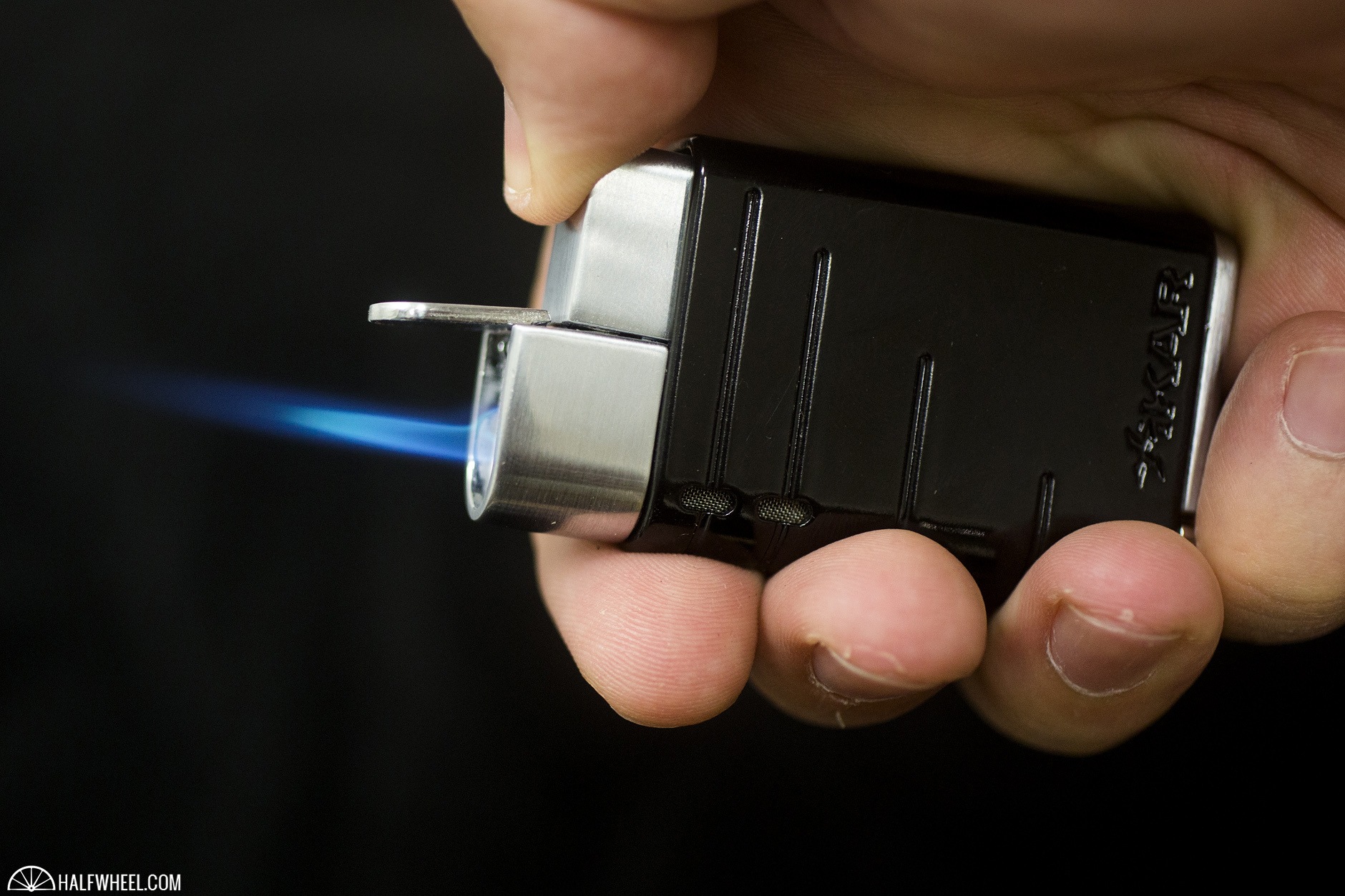 Adjusting the flame is quite easy—well, too easy, but more on that in a moment—thanks to a large, ridged adjustment wheel located on the base of the lighter, directly inline with where the torch is, The range of adjustment is a bit beyond 180 degrees, with my sweet spot just below the halfway point, a lower setting than I find on most lighters. It won’t light at either its highest of lowest settings and when using the company’s new Purofine High Performance Butane, it definitely is best set just below the midway point.

The ease of adjusting the flame comes with a noticeable downside, as I find my ring finger unintentionally turning the flame up while I’m using it. The way my hand cradles the lighter results in my middle or ring finger pulling ever so slightly on the wheel, which leads to the wheel turned to a more open position. It’s a gradual change, but inevitably it reaches a point where the wheel is too open, and the lighter won’t ignite, as they are designed not to do. As such, I found myself constantly turning the lighter back down, as it functions much better both in ignition and usage when the adjustment wheel is set below the midway point.

This also seems to happen while the lighter is in my pocket; I have to assume that it catches on a key or my phone and the wheel turns just a bit. It reached a point where I began wondering if just the natural vibration of walking might be turning it. What’s interesting is that I never found the wheel to go the other direction and thus needing to be turned up. 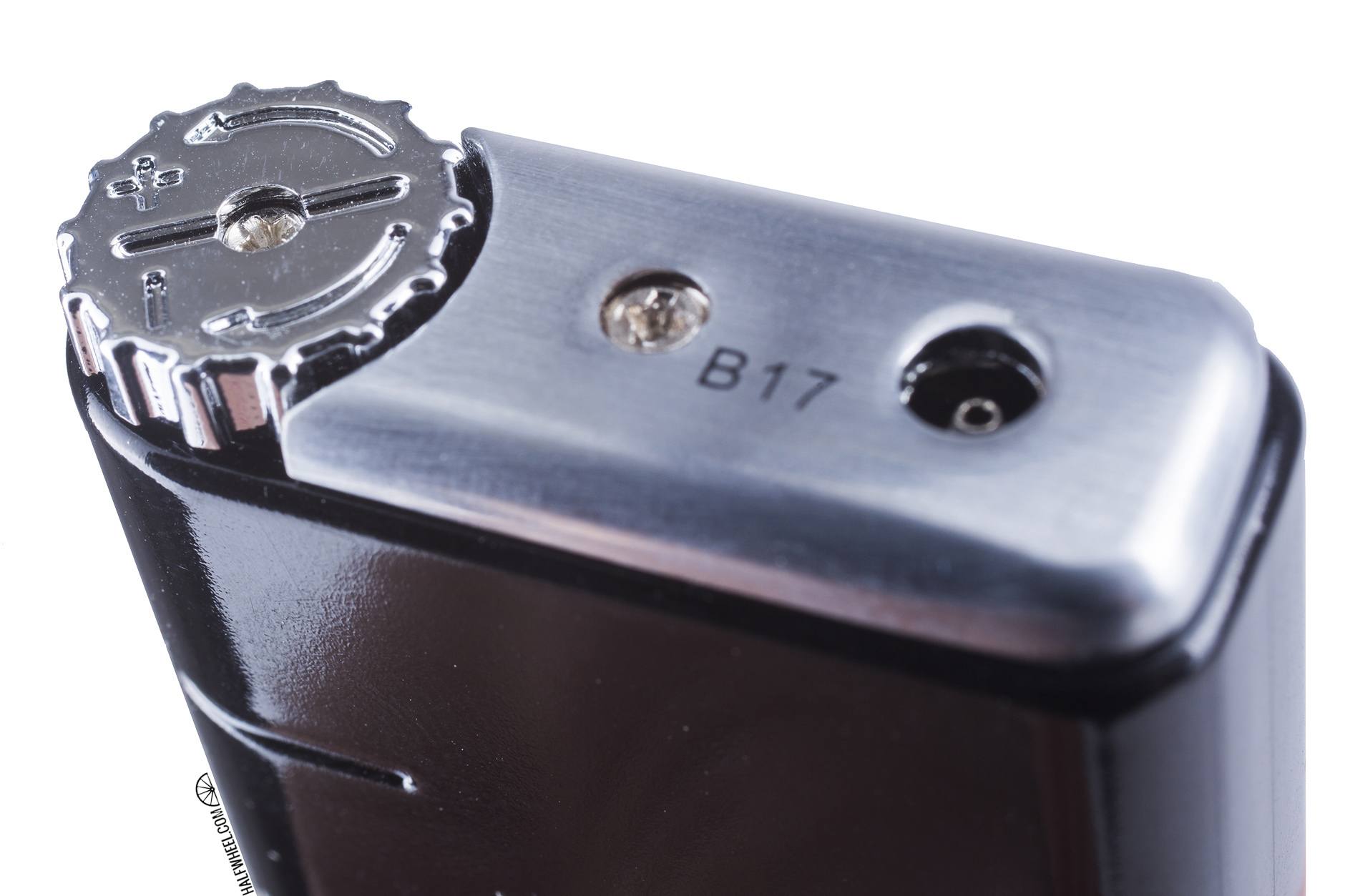 Beyond the basic use, the lighter has all the familiar design elements, including a standard fuel valve on its underside and a fuel window towards the base underneath the flame. It’s this window where the Linea also falls a bit short; first it lacks XIKAR’s EZ-View fuel window with its red tint that makes checking fuel levels a breeze. Instead, the company calls it a “large” window—a term I’d dispute—and while I can see some fuel when I turn the lighter sideways, it seems to never show me how much is in there when held right side up or upside down. It’s perplexing to me why the tinted window wouldn’t be included, though I’m inclined to guess it’s cost related, but the window proved to be almost useless in seeing how much butane I had remained in the lighter most days.

That said, the Linea holds a respectable amount of fuel, more than enough to make it through several cigars before needing to be topped up, and certainly in line with most pocket lighters. Additionally, since I found the lighter to perform better at lower flame heights, it’s easy to make this a sipper as opposed to a gulper of butane.

If durability is a concern—and it should be for any lighter—the Linea held up fairly well overall several weeks of testing, though the ignition button developed a bit of play. While it is an up-and-down mechanism, there is a tendency to exert some force that pulls the button back, and the Linea didn’t seem to have any way to fight that. As such, there’s just a bit of wiggle now that isn’t impeding usage, but it does show one of the weaker spots of its construction. 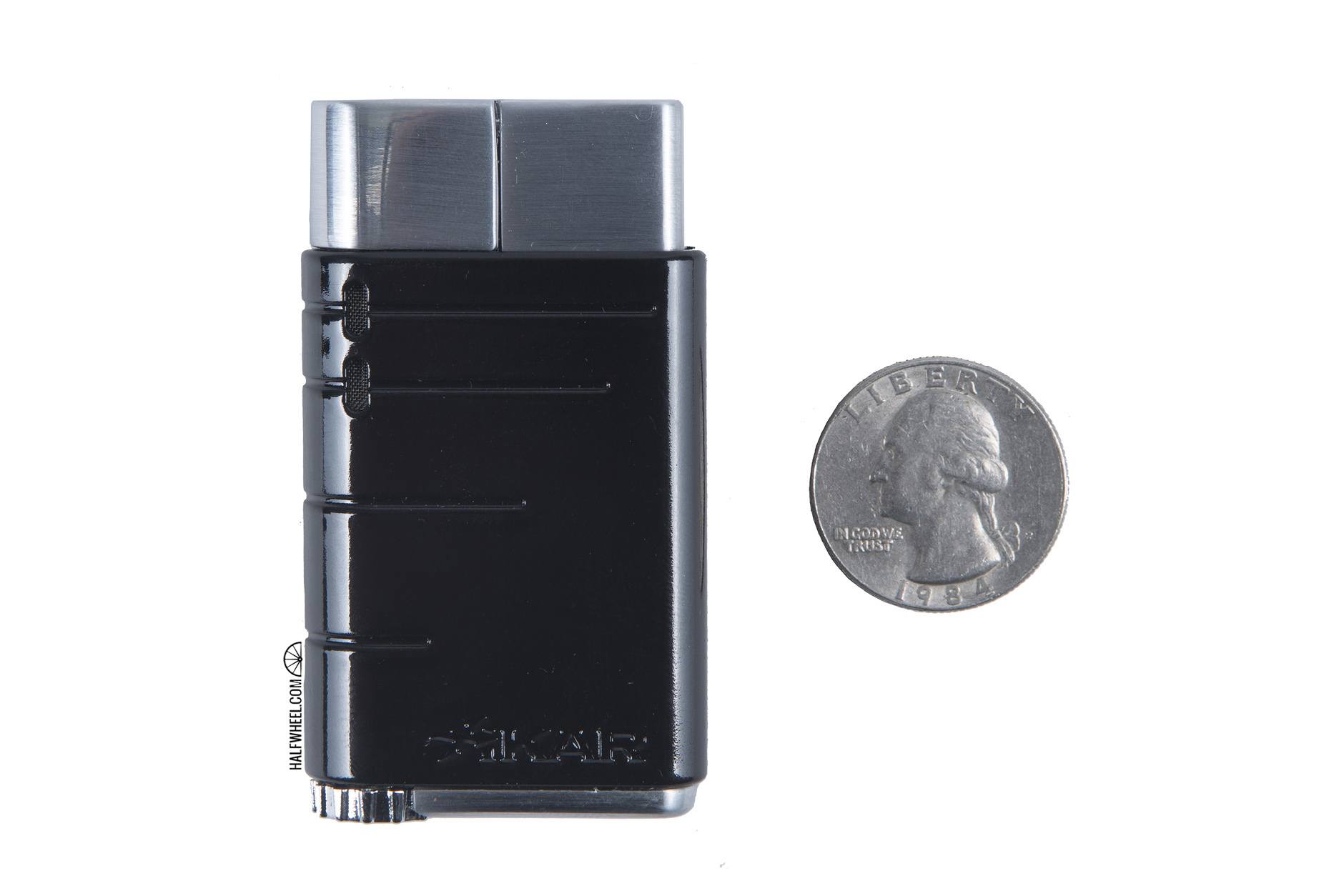 The finish has also held up quite well, particularly the plastic casing. The metal top of the lighter has just a few slight scratches, most likely from being in my pocket and rubbing up against keys and a cutter. Fingerprints are easy to wipe off, and while I couldn’t pass it off as brand new, it would be hard to guess just how much usage this has gotten.

I’m happy to say that the XIKAR Linea is a more than capable single flame torch lighter, and on its own it’s hard to complain about much; it’s easy to use, holds a respectable amount of fuel, has a decent design, the flame is near perfect, and in the grand scheme of things doesn’t break the bank.

Yet for all that I like about it, there’s little that I love about it. The design doesn’t inspire me, there are enough misfires due to the flame adjustment wheel opening up to be annoying, the fuel window is a disappointment, and it just feels like a lightweight in XIKAR’s otherwise impressive lineup.

Then, when I start comparing it to other entry-level single flame lighters on the market that come with MSRPs closer to $10, it gets challenging for the Linea to stay appealing. While this is an entry-level offering from XIKAR, it’s far from being priced like an entry-level lighter amongst its competition. When compared to lighters from other companies in that space, it certainly appears that a premium is being charged somewhere, yet other than the lifetime warranty and the design I’m not sure I can pinpoint exactly where that is. That said though; I do appreciate the company standing behind its products, even its lowest priced ones.

The XIKAR Linea is available in four colors: black, blue, red, and yellow, each with an MSRP of $29.99.

The lighter for this review was provided by XIKAR. Site sponsors LighterUSA.com and Thompson Cigar carry the XIKAR Linea.