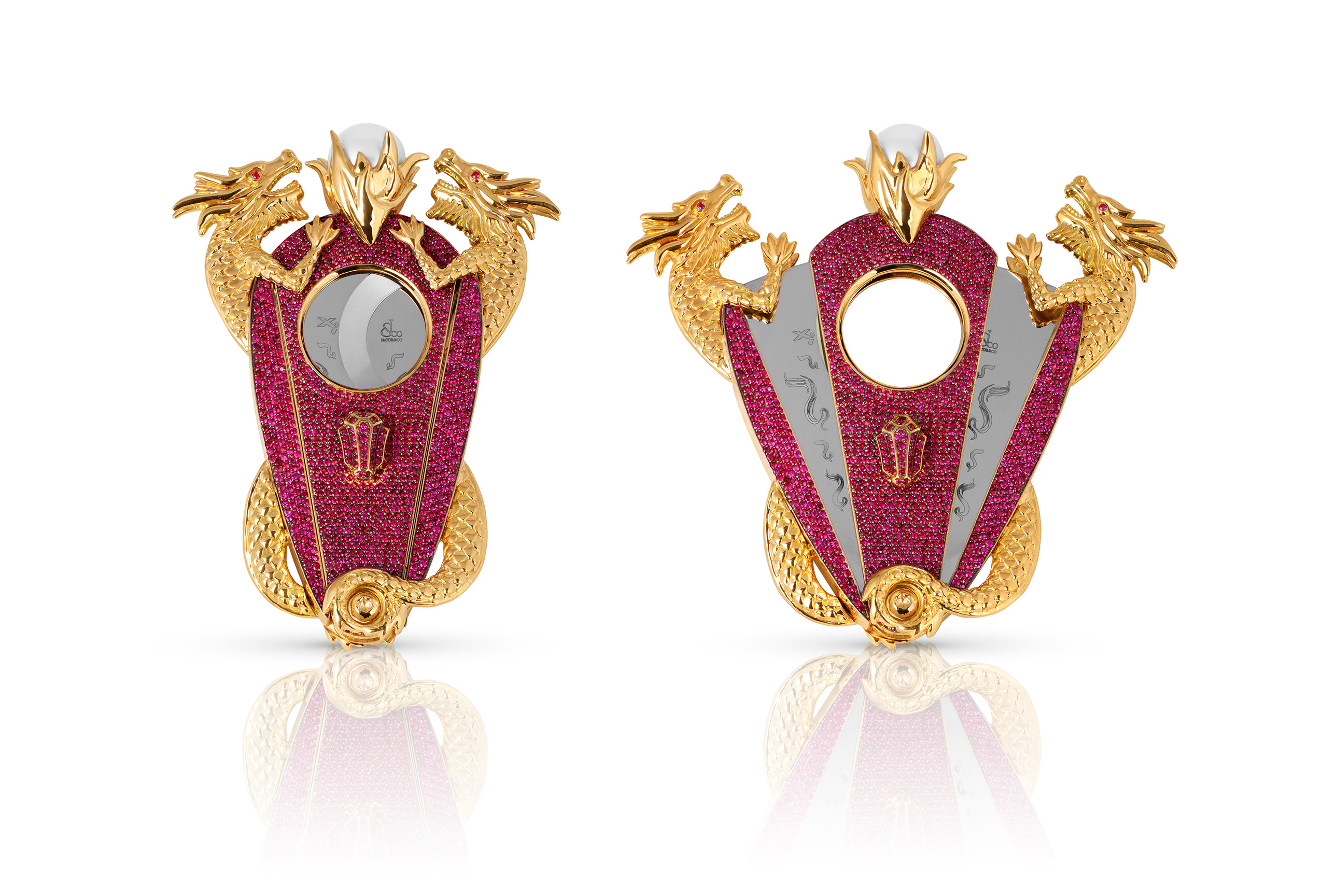 For those looking for the ultimate tool to cut one’s cigar with, Quality Importers has announced a new series of XIKAR cigar cutters that should do the trick.

The company is partnering with Jacob & Co. for a new collection of luxury cutters, the first of which is the XIKAR Xi Dueling Dragons Chasing Flaming Pearl. A one-of-one piece, the cutter is built around the XIKAR Xi body and its stainless steel blades, with an 18 karat gold body and blade handles. Those were then pavé set by hand with 1,940 red rubies, a total of 22.5 carats that cover both the front and back of the cutter. On the handles are two ruby-eyed dragons made from 18 karat yellow gold that are chasing a pearl engulfed in more gold in the shape of a flame set at the top of the cutter. All of the gold and gems bring the cutter’s weight up to 169 grams, or just over a third of a pound.

According to a press release issued by Quality Importers, the design is inspired by an Asian legend of two dragons chasing a mystical flaming pearl, which is seen as a symbol of luck, wisdom and prosperity. It is a legend that has been used in numerous pieces of art around the world, as well as items that have become art over the centuries, such as helmets, medallions, badges and ceramics. “When we purchased the XIKAR brand, the first idea I had was to design a ‘museum piece,’” said Michael Giordano, founder and ceo of Quality Importers, via a press release. “Something that would not only be a first of its kind in all aspects for XIKAR, but also for the accessories market itself. When I mentioned the idea to Jimmy Miudo, our vp of marketing, the idea was quickly developed, and became what we see before us now. It really is a stunning one-of-a-kind piece. The team at Jacob and Co. loved our idea and was instrumental in turning our concept into reality. We’re looking forward to building upon this partnership with them.”

While the first piece is a one-off, Quality Importers plans to offer a series of bespoke XIKAR Xi cigar cutters made in collaboration with Jacob & Co. Pieces will be made-to-order utilizing gemstones and diamonds.

“We are always open to exceptional opportunities to apply our expertise to different luxury segments, with the very best partners,” says Jacob Arabo, founder and chairman of Jacob & Co. “When Quality Importers approached us with the idea, we were intrigued. We are very active in the Chinese market and have many watches that feature dragons, so the design of the dragons and the flaming pearl was ideal for us. This is just the start of the relationship and I’m excited about the incredible products we can create together.”