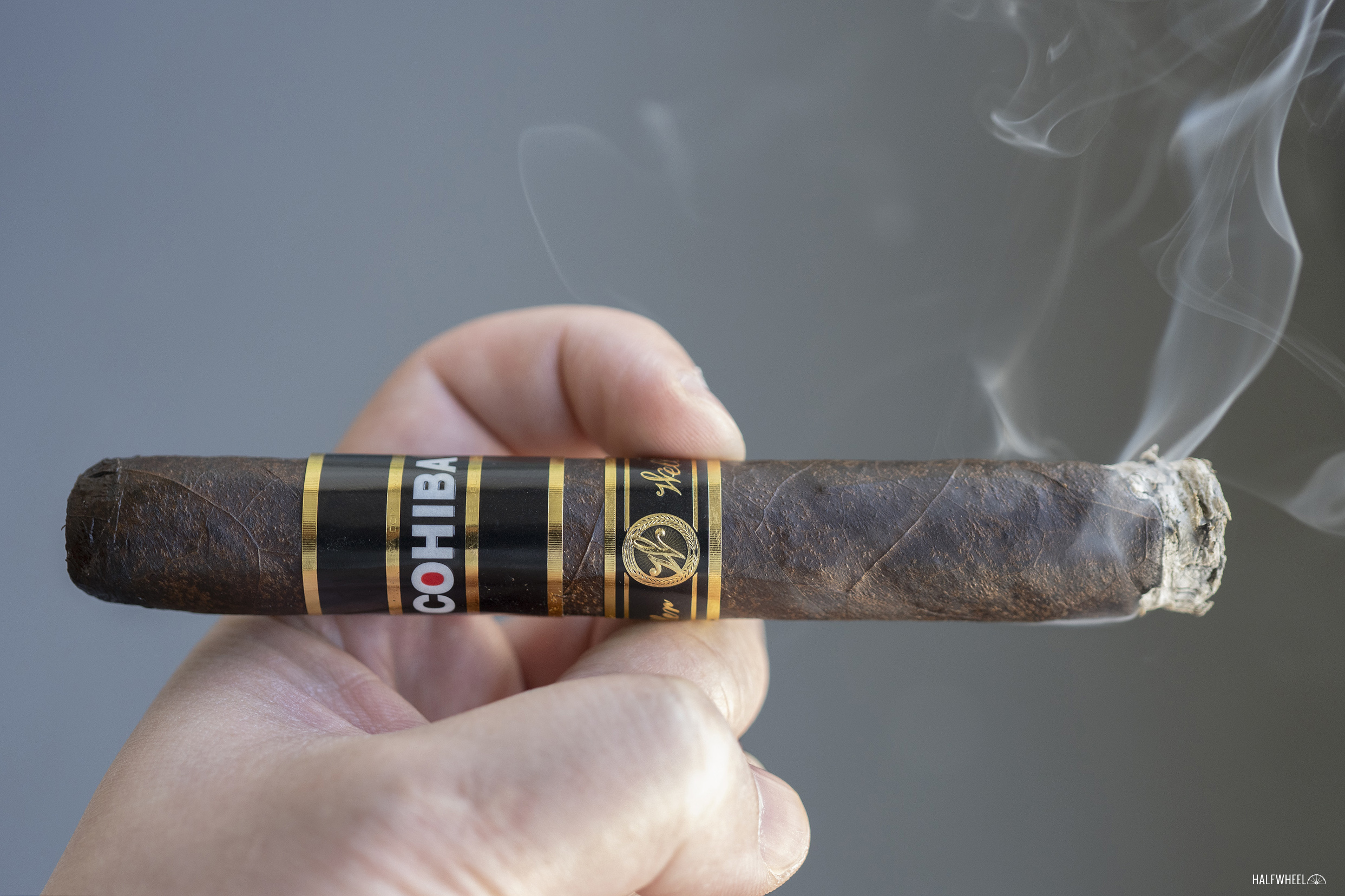 One of the more interesting cigar projects of 2021 has been Scandanivaian Tobacco Group’s (STG) collaboration with Sazerac. Chances are that you probably better know those two companies as General Cigar Co./Cigars International and Buffalo Trace, though the deal technically extends beyond those three companies.

Sazerac is the parent company of Buffalo Trace, both the whiskey label and the distillery that produces a wide range of bourbons and ryes in Frankfort, Ky. STG is the largest player in the American cigar market thanks to its distribution companies—General and Forged Cigar Co.—and its retail operations that include Cigars International, Thompson and others.

For the collaborations, both companies are utilizing various brands from their large arsenals. So far, there have been three different cigars released, each using the name and branding of a Sazerac whiskey label, made at General Cigar Dominicana.

In case the title wasn’t obvious, today’s review is of a Weller-branded cigar sold under the Cohiba label. Unlike the other two cigars in the series, this cigar is being offered to retailers nationwide through General Cigar Co.

The Weller by Cohiba is a 5 1/2 x 50 robusto extra that uses a Honduran ligero wrapper from San Agustín, a habano medio tiempo binder from Connecticut and fillers from the Estelí and Ometepe regions of Nicaragua. It is being made at General Cigar Dominicana, the longtime home of the non-Cuban Cohiba brand.

Each cigar comes in a glass tube, which are then packaged in boxes of 10. The Weller by Cohiba has an MSRP of $19.99 per cigar. 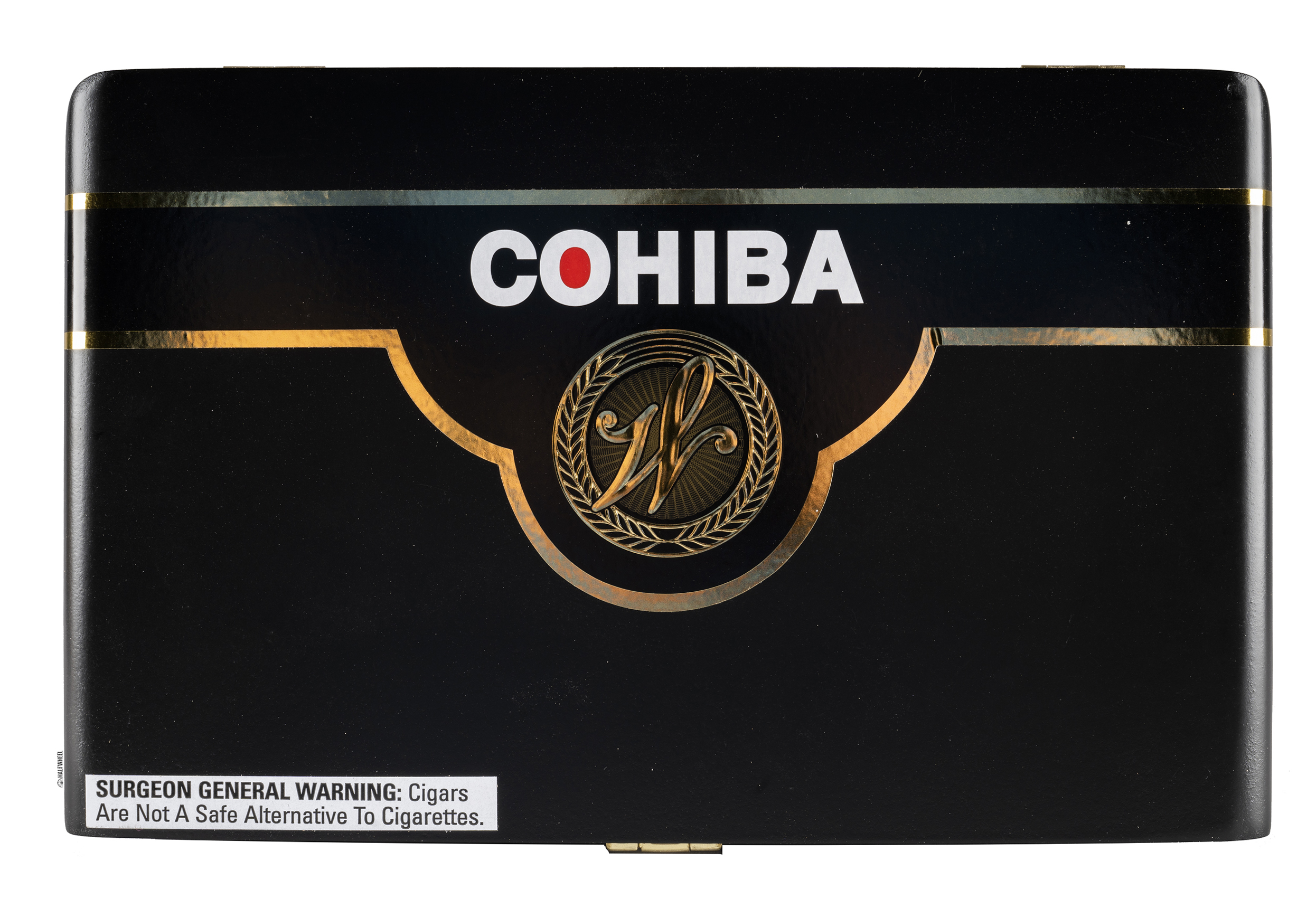 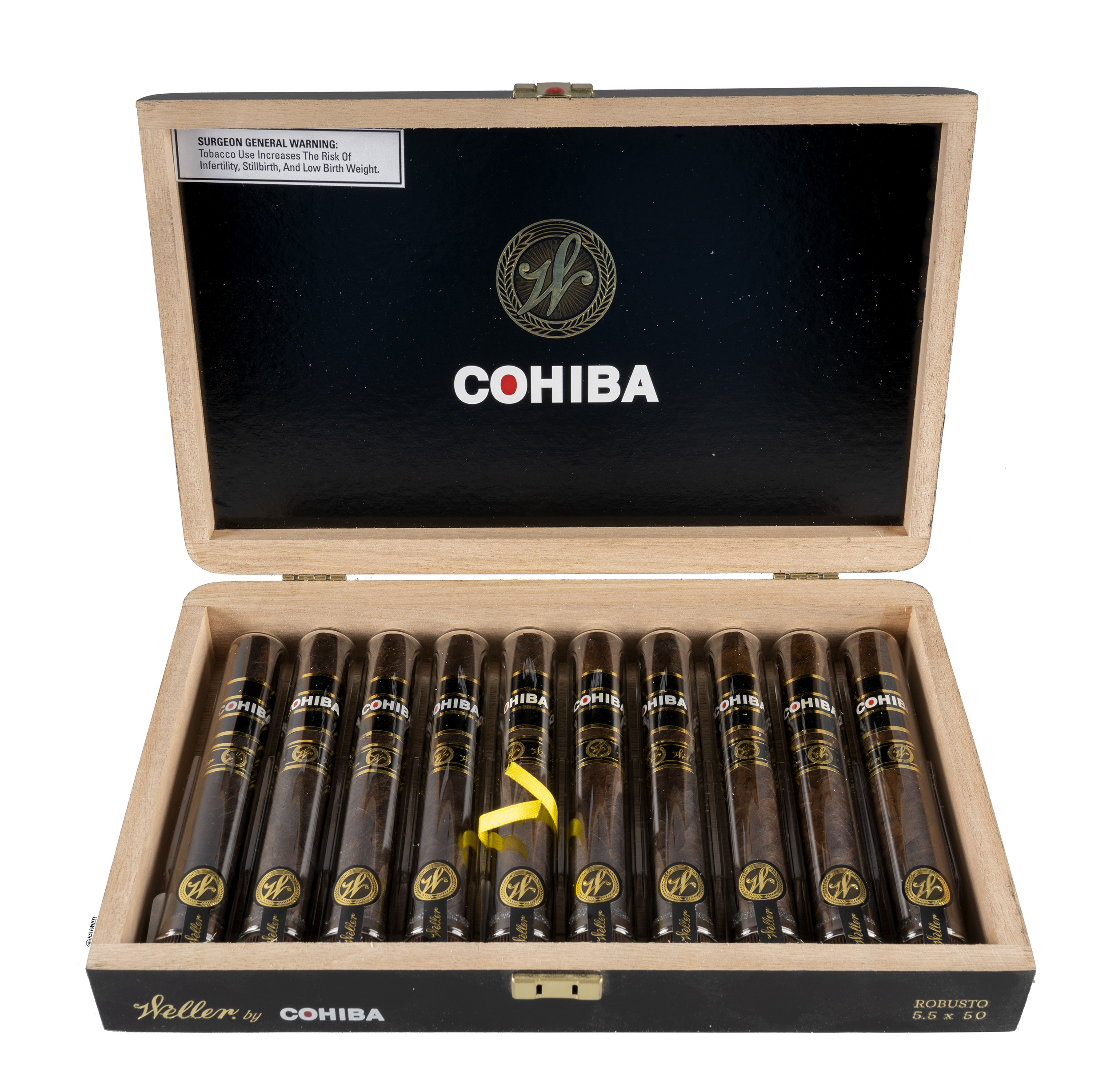 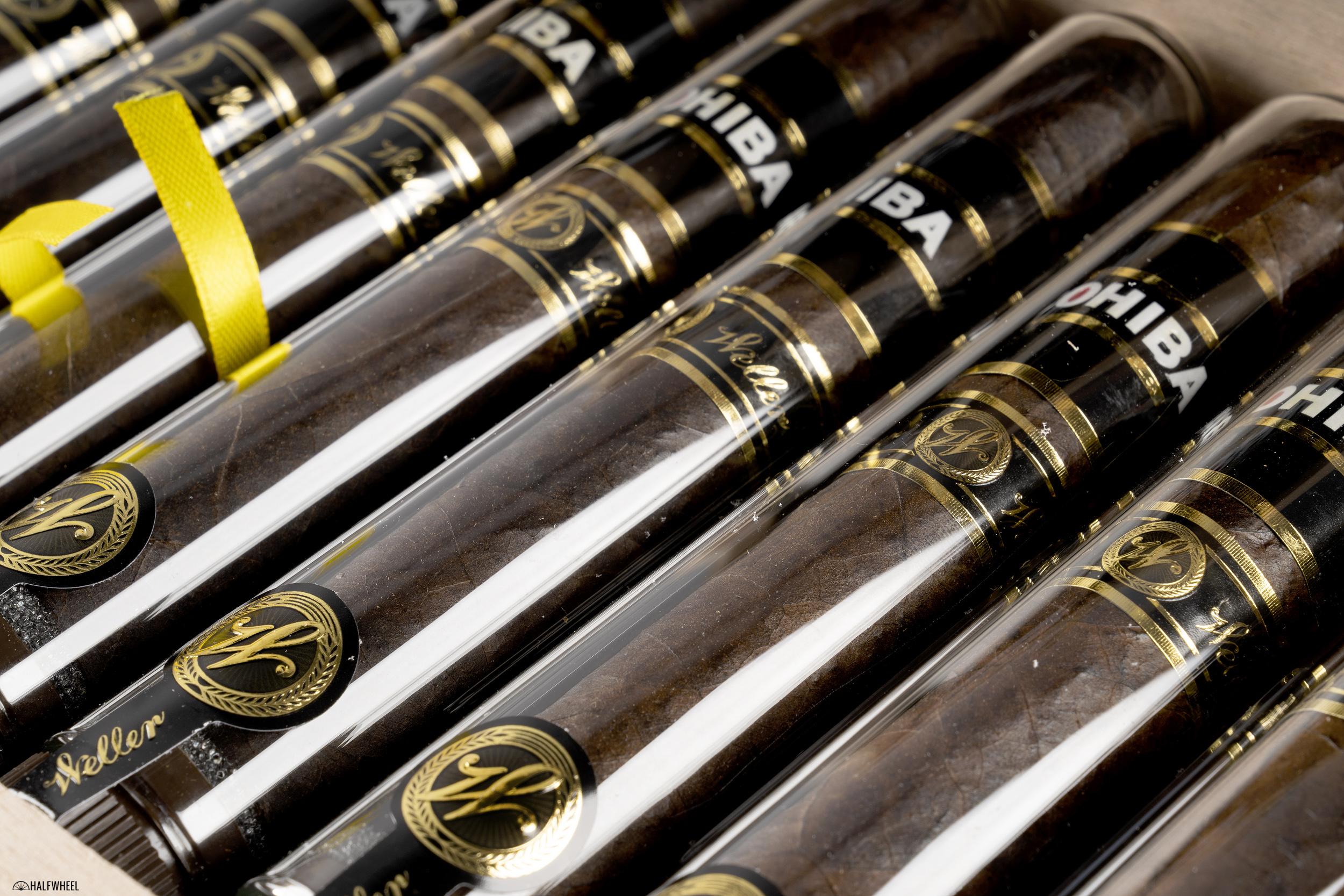 While the cigars are a collaboration between the two companies, the rolled cigar doesn’t have anything in common with Weller whiskey. The tobaccos used are not aged in barrels that previously held bourbon, the cigars aren’t aged in barrels and the cigars are not infused with any bourbon-like flavors. That being said, STG says its blenders drank the various whiskeys while blending each cigar.

“We blended Weller by Cohiba to be the ultimate cigar for spirits connoisseurs,” said Sean Williams, brand ambassador for Cohiba, in a press release. “The experience is rich and layered, imparting notes of cocoa, espresso and leather on the palate before cascading to a luxurious finish. While the depth and complexity of this cigar make it the ideal choice for pairing with your favorite spirit, Weller by Cohiba is equally as extraordinary when savored on its own.” 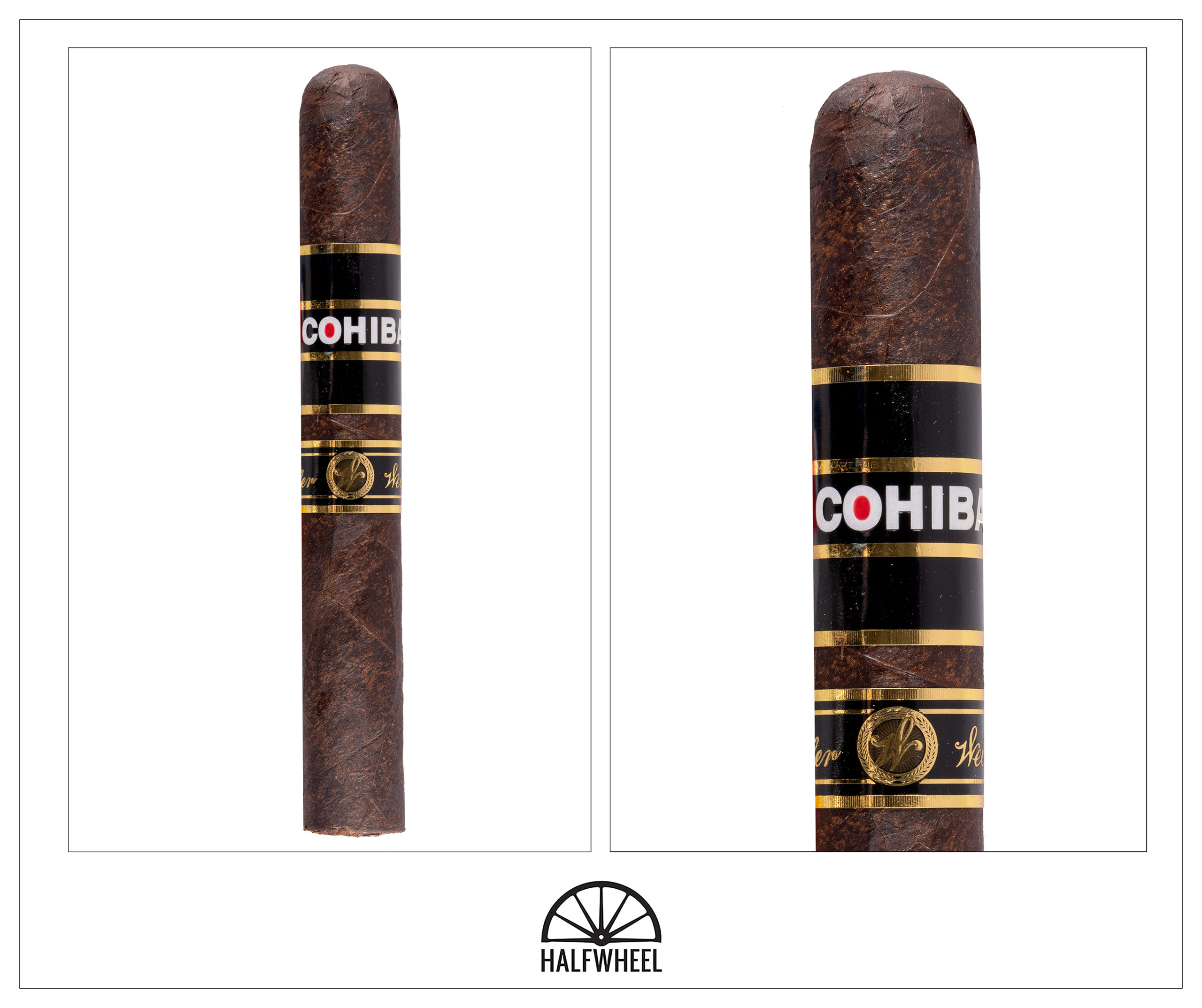 The Weller by Cohiba has a very dark color that reminds me of a raisin, though I can pick out the differences between the wrapper’s color and solid black thanks to the contrast with the band itself. The Weller logos are done very well on both the band and the tube, though the sticker that covers the bottom of the tube isn’t centered on any of the three cigars I smoke. The wrapper leaf isn’t rustic, but there are some veins and rough spots as my fingers run down the cigar; the larger takeaway is just how much oil the wrapper has on it. While I don’t notice it initially, the first cigar has a two-inch long hard spot that starts at the bottom of the main band and runs down through most of the middle of the cigar. After noticing that, I’m a bit more attentive to the other two cigars. One is fine while the other has an inch-long hard spot towards the bottom of the cigar. Aroma-wise, there’s not a lot from the wrapper, just some barnyard, leather and something that reminds me of a ream of copy paper. The foot is somewhere between medium-plus to medium-full depending on the cigar, offering nuttiness and granola over some barnyard and something reminiscent of smoked chicken. Depending on the hard spots, the cold draws are a bit different though they are all tight. The sample with the largest hard spot is pretty sweet with raisins, granola, red apples and some tartness towards the end. An even tighter cold draw continues with the fruity theme, though it’s more akin to cranberry juice, joined by some soy sauce flavors, earthiness and a touch of irritation.

My largest concern when starting the Weller by Cohiba is the construction. The tight draws and hard spots have me concerned for what the next few hours might hold, but I’m pleasantly surprised when I see tons of smoke pouring off the foot. Flavor-wise, sweet cedar is the standout flavor, though there’s also earthiness and some underlying sweetness. What that sweetness is depends on the cigar—sometimes it’s a bit like a sweeter apple flavor, other times it’s more of a creaminess, and sometimes it’s just a generic sweetness. The first cigar is the outlier here and it’s a pretty noticeable one at that. Nearly 40 minutes into the cigar you see pictured below, I have burned about a half-inch of the cigar. Smoke continues to come off the foot with no issue, but the tight draws and whatever is off in the bunch of the cigar are having issues. Flavor-wise, there’s a pretty consistent combination of a woody component, earthiness, some sort of creamy flavor and some underlying sweetness. For the first sample, the woody flavors aren’t as prevalent, instead, giving way to coffee, pita bread and something that reminds me of a bitter cola. The other two cigars are similar thanks to oak, sourdough bread, coffee, nuttiness and, at times, a wheat pasta flavor. The finish of each cigar is quite different, one is salty and a bit metallic, another is more pedestrian with a lot of the main flavors carrying over, and the final cigar adds fruitiness along with some herbal flavors. Retrohales are more consistent with oak leading the way over sourdough bread, dark chocolate, barnyard, herbal flavors and some white pepper. Flavor is medium-full, body is medium-to medium-full and strength is medium-plus. While the smoke production is great, the draw on each cigar is tight and on the first sample, it’s noticeably affecting the cigar’s burn rate, which is amongst the slowest I’ve witnessed in quite some time.

While the cigars are becoming more homogenous, there are still two different paths I’m on depending on which Cohiba I’m smoking. For the cigar with the tight draw, it means a flavor profile of oak, green apple skin and some creaminess. That’s followed by a finish of nuttiness, oak, thick creaminess, sugar cookies, saltiness and a familiar white pepper. As for the other two cigars—whether intentional or not—the oak flavor is more like a bourbon thanks to a sweetness joining the woody flavors and some irritation that has separated itself from the pepper. It is not like smoking a bourbon, but it does have some similar qualities. Mouth salivation picks up a lot in the second third, which helps both the main flavor and the finish. As the smoke leaves the mouth, there’s a sharp, earthy flavor accented by some white pepper and saltiness. Sourdough bread, herbal flavors, toastiness and some of the other bourbon-like sensations linger. The retrohales are a bit closer than the main flavors. The tight sample has some creaminess and herbal flavors that probably take away from the idea of this being a bourbon-like cigar, but the other two cigars remind me of an overproof bourbon thanks to an uptick in the irritation, which joins the sweet oak and toasty flavors. That being said, as the toasty finish sets in I can pick up some more of those herbal flavors similar to the first cigar. Flavor is medium-full, body is medium-plus and strength is medium-plus. Touch-ups are needed across each sample, though the one with the tight draw is worse than the other two. Sometimes it’s to fix an uneven burn, other times it’s because of some tunneling. That being said, the smoke production is so massive, I almost feel like the cigar should get bonus points to offset some of the losses; unfortunately, our score sheet doesn’t allow for said bonuses. 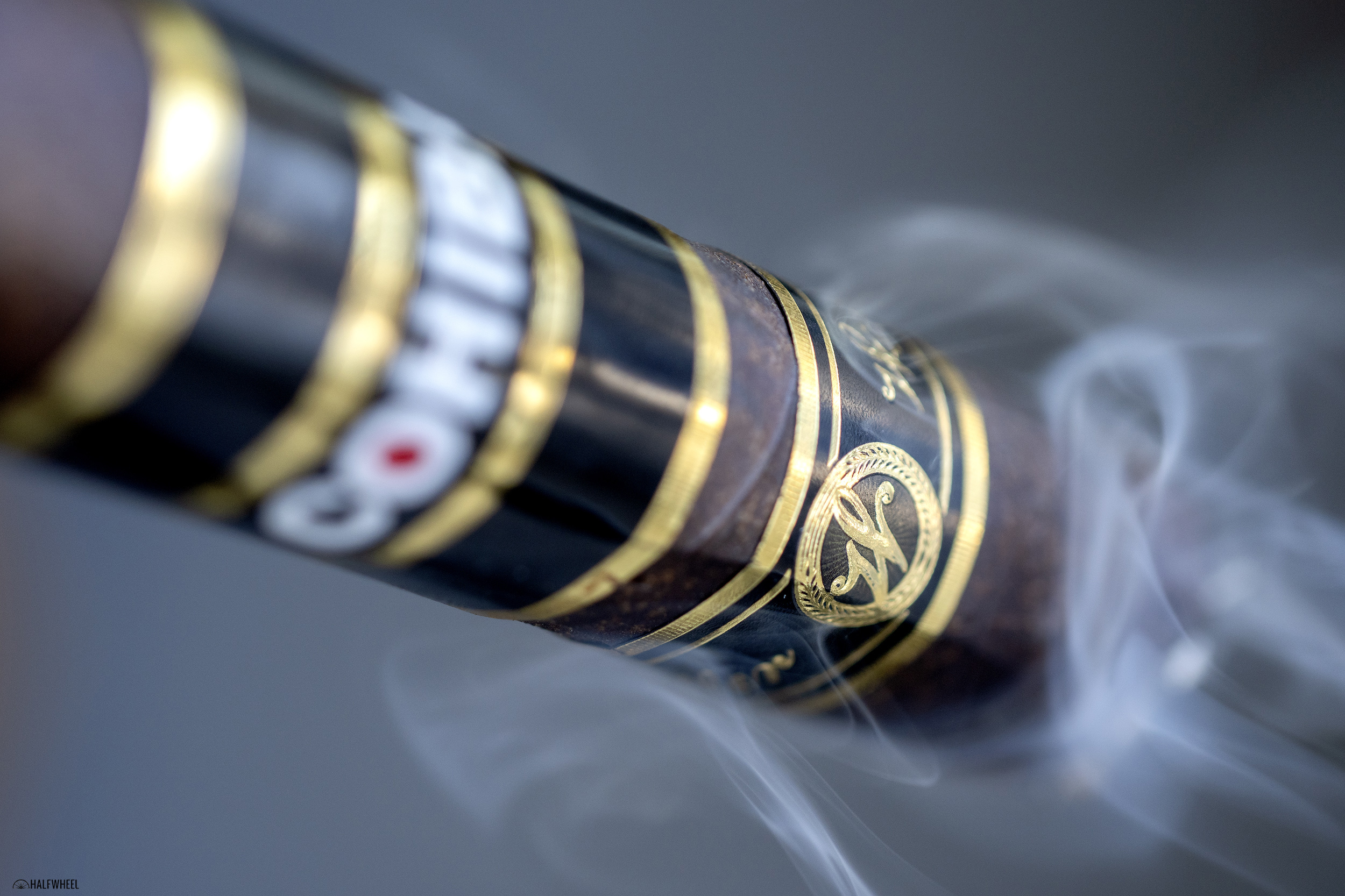 While it comes at different times—at least in comparison to when I started each cigar—by the time the final third arrives, the cigars seem to be more or less the same. It’s much more intense thanks to both an uptick in the flavor level, but also the fact that there’s a lot more toastiness and pepper. The woody flavors remain quite strong, but they are now toastier and less sweet, thanks to the sweetness isolating itself from the woody flavors, rendering it to be a bit more like sugar. Herbal flavors seem to accent everything, though as an individual unit, they never get that strong. The cigars finish with toastiness, creaminess, leather and a bit of saltine crackers. Retrohales of the Weller by Cohiba deliver more floral flavors joining the earthiness, creaminess and a reduced amount of the bourbon-like flavors. The finish is a combination of everything to this point: a toasty oak similar to the second third, saltine crackers that emerged in the final third, a continued irritation instead of pepper, and a newfound pizza crust-like flavor. Flavor finishes full, body is close to medium-full and strength is medium-plus. While one cigar does well construction-wise in the final third, the other two cigars lose points: one for a tight draw and both for touch-ups. 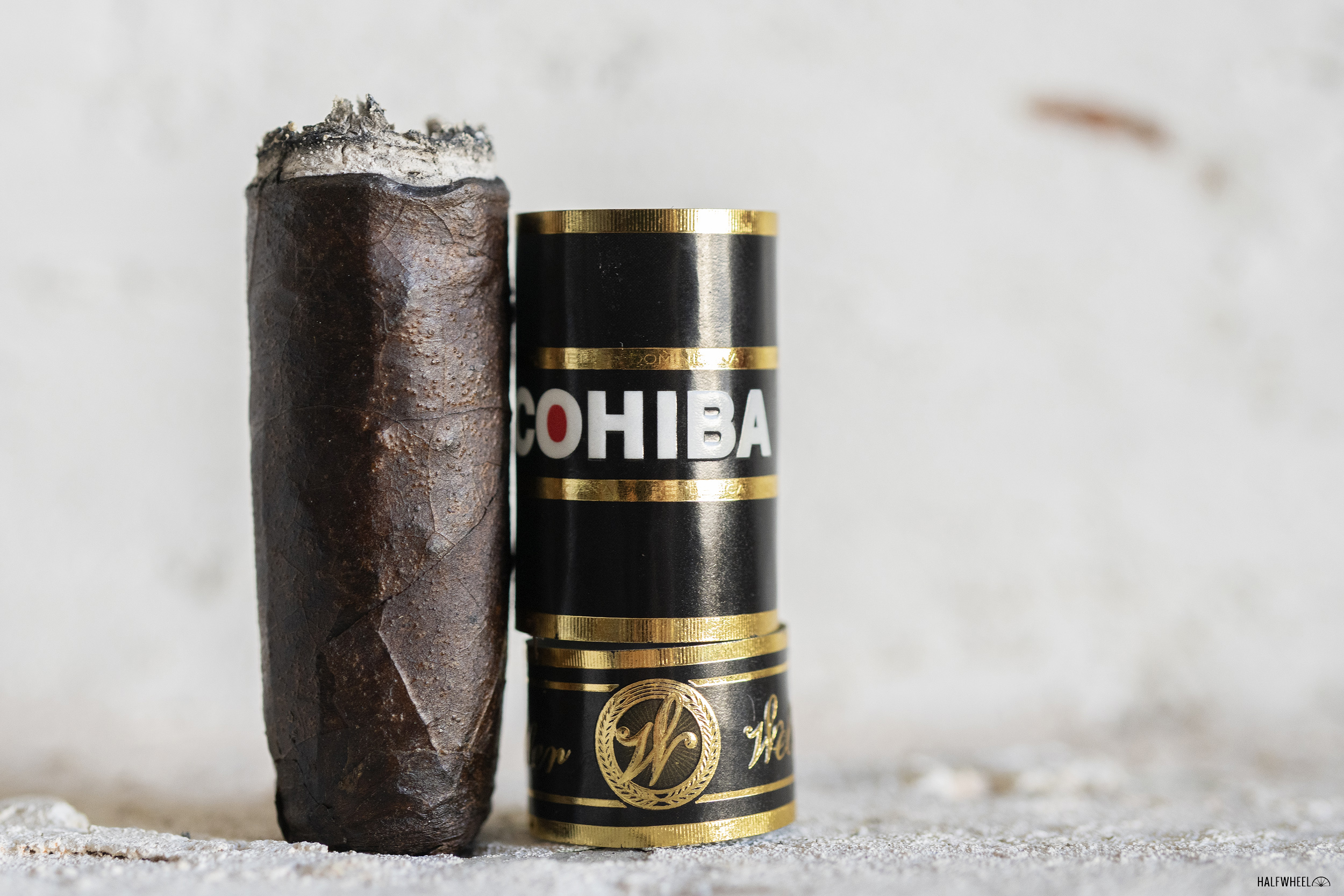 I’m not sure why each cigar ended up being—at the very least—a bit tight, but it definitely had an effect on the flavors I tasted and the score the cigar is going to be given, particularly the first sample and its very poor draw. Flavor-wise, I still enjoyed that sample, but the cigar shouldn’t have taken me an additional hour to smoke and there were more problems than just how long it was to smoke. Given that these cigars are more marketing collaboration than recipe collaboration, I’m not entirely sure how to answer most of the questions people have about these cigars; more to the point, I’m not sure how smoking three cigars answers them. The tobacco wasn’t aged in barrels that previously held Weller, the cigars weren’t aged in barrels, the cigars weren’t really even made to be paired with Weller. As for whether it’s a good cigar, it’s fine. This isn’t the best Cohiba from General Cigar Co. I’ve smoked, it’s also far from the worst. If anything, I think these will very much serve one intended outcome: the Weller by Cohiba is a great gift for a bourbon nerd who might smoke a cigar.