For the first time in a while, a fairly quiet news day… Add Graycliff to the list of cigar manufacturers who are now branding watches. The Zino brand previewed its newest creation, the Zino Chateau. Hurricane Paula headed towards Cuba earlier this week. Fortunately it seemed to only temporarily knock out power. In other Cuban news, it seems like the Asia/Pacific REs are now available. In other release news, the new Oliva Serie V Maduro 2010 should hit stores in the next week. The use of cigars as a negative political campaigning tool continues. Rep. Brian Bilbray’s opponent sent out an ad of Bilbray smoking a cigar. This is the same Bilbray who leads the Congressional Cigar Association. There seems to be a push for a modified version of the New York City park and beach ban. (Small) cigar sales are up. Finally, the closed Thompson Cigar Co. factory saga continues.

Update: MasterCard seems to have pulled the ability to process cards for mail in tobacco orders, numerous retailers have reported that they can no longer process orders, while some retailers seem to be doing just fine. The issue can be resolved with the processor, but it’s definitely MasterCard’s doing. It should be noted that this isn’t the first time MasterCard did this, in late 2008 they enacted a similar ban as part of efforts to stop the sale of cigarettes online. Known retailers currently blocked:

Update II: Sounds like retailers will have to pay a $1,000 fee to process orders, my understanding is that orders should resume in a day or two.

Update III: Attached is the letter that MasterCard sent out. Here’s a link to the website that MasterCard set-up which doesn’t help much at all. Big thanks to Cliff from 262 Cigars. Edit: Trying to get a bigger picture. 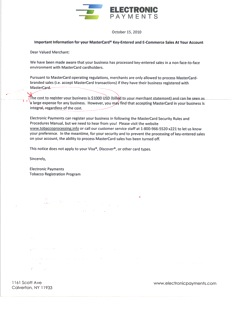