The big news this week, the story I broke on Thursday, Sam Leccia will be leaving Oliva Cigar Co. at the end of this year. This comes shortly after the partial unveiling of Studio Tobac, the arm of Oliva who will subsume the Cain and NUb brands. Sam doesn’t own any part of either brand, so one can assume that they will stay the same. There are numerous rumors as to what Studio Tobac might include, much of which will be found out this week at Cigar Aficionado’s Big Smoke, where the brand will be officially unveiled for the public. Sources tell me that it will be a vehicle for limited releases and other innovative products. Everything seems to point to Studio Tobac being made up of a few of Oliva’s reps. I can say with confidence that Sam will not be the last one to leave a brand they represent this year.

Davidoff sent over the press sheet for the new Maduro Toro. It’s a 6 x 48 Dominican that comes in boxes of twenty-five cellophaned cigar retailing at $18.50 a piece. Your local Davidoff authorized merchant should have them in stock. 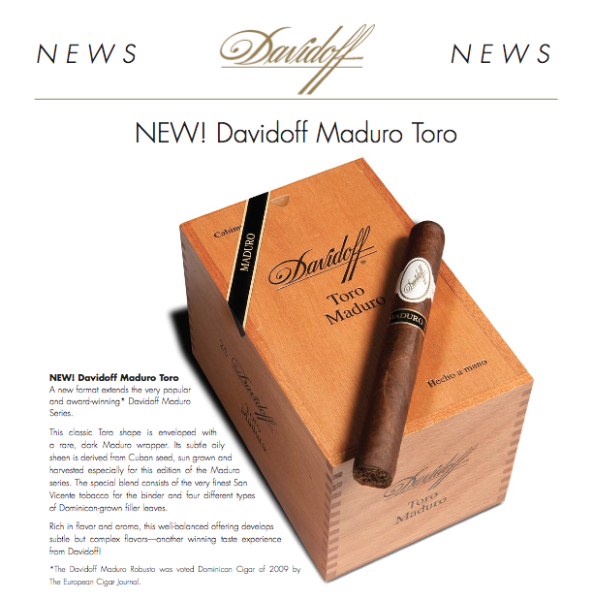 Another week, some more news from Tatuaje. Pete tweeted about Pepin’s new farm, here’s a picture courtesy of Pete. Tatuaje also has a new release for J&J Cigars in Seattle, WA. Details:

My understanding is that state laws prevent them from shipping them out of state, which might explain why they still have boxes left.

In legislative news, South Dakota has two more days before their indoor smoking ban goes into effect. Habanos S.A. continued their mission to sue anyone and everyone. The Bartow Cigar Factory got a six month stay…

“There’s something for everyone” said Foundation co-founder and J.C. Newman CEO Eric Newman, “the best cigars, private shopping, great food and wine… what more can you ask for!”

Tickets are on now on sale for $100 ($150 at the door) and include food, drink and cigars. Thanks to participating sponsors, all proceeds from the event will benefit the Cigar Family Charitable Foundation. For more information or to purchase tickets please visit www.cf-cf.org or call 813-248-2124. WHO: Saks & Cigars WHAT: A shopping/tasting event featuring fine wines, cigars, live music and more to benefit the Cigar Family Charitable Foundation. WHEN: Thursday, November 18 6 – 9 p.m. WHERE: Saks Fifth Avenue at the Westshore Mall

The Cigar Family Charitable Foundation is a 501(c)3 started in 2001 to help the children and families of the Bonao region of the Dominican Republic through education, empowerment and healthcare. For more information about the foundation please visit www.cf-cf.org.

MACANUDO MILLIONAIRE CONTEST WINNERS TO VIE FOR $2,000,000 PRIZES AT PLAYBOY CLUB IN VEGAS

Newman and three guests, along with Rold, Greenlee, Knuesel and Purdy, each with a guest, will jet to Las Vegas for an all expense paid, three-day, two-night trip to the Palms Hotel and Casino where they will be accompanied by three Playboy Playmates for a VIP evening at the legendary Playboy Club.

While in Sin City, on Saturday November 13, Newman and his guests, along with the Macanudo Millionaire retail grand prize winner and his guest, will each be dealt a hand of poker. If either the contest winner or their guests receive a straight flush, they will win the $2,000,000 prize, courtesy of Macanudo. This year’s Macanudo Millionaire promotion ups the stakes from last year’s promotion – doubling the prize money from $1,000,000 to a cool $2,000,000.

Debo Mukherjee, vice president of marketing for General Cigar, parent company of Macanudo, comments, “We were incredibly excited by the buzz generated by this year’s Macanudo Millionaire promotion. Together with the team at Playboy, we are gearing up for another, even more exciting weekend in Vegas and look forward to sharing the results with the media and consumers who have actively followed the contest since its kick off in September. Maybe this year, we’ll celebrate crowning a Macanudo Multi-Millionaire.”