Late cigar news is better than no cigar news? Apologies, it’s been a hectic day, shouldn’t happen again. Now for things you care about… A week without Tatuaje news? Almost. A week without Viaje news? Absolutely not. A week with any other news? Yes. Info for new products from Habanos S.A., Nestor Miranda, La Caridad del Cobre, Lou Rodriguez, Brick House, Zino & more. I’m not on the Davidoff press list, but below is the official announcement from the Zino Platinum Z-Class, which we broke some time ago:

The Zino Platinum Crown and Scepter series launched in 2003 will be complemented by a third line: The new and modern Zino Platinum Z-Class Series was inspired by motion. It was created to accompany a fast-paced affluent lifestyle, embodying ambition and opulence. The new blend features a Dominican wrapper, accented by a Peruvian binder and Nicaraguan and Honduran fillers. These carefully selected, aged tobaccos create a spicy medium-to-full bodied cigar that surpasses the degree of perfection that Zino Platinum smokers demand. The Z-Class Series is complete with four classic formats: The 654 T (5 7/8 x 54 Toro, $12), 550 R (4 7/8 x 50 Robusto, $10), 546 P (5 1/4 x 46 Piramide, $9), 643 C (5 5/8 x 43 Corona, $8). Each shape has its own unique strength, flavor and aroma to allow for pleasure and variety. The power of Z-Class comes from a Dominican wrapper, Peruvian Pelo do Oro Visus binder and Jalapa Especial Ligero, Esteli Ligero, Cuban Seed Ligero, San Vicente Ligero filler tobaccos from Nicaragua and Honduras. The packaging continues to be innovative: All formats are packaged in an attractive and modern custom tin of 20 cigars accented with sleek black bands and are available May 2 at select merchants.

J.C. Newman has a new size for Brick House, expect this at the IPCPR show as well.

Brick House cigars are now available in a sixth size, the Short Torp

TAMPA, FL – Brick House cigars have taken the country by storm since their introduction to the marketplace in 2009. Due to its widespread popularity, J.C. Newman is adding a sixth size to the Brick House line, a 5 ½” x 52 pyramid, the Short Torp.

“We are excited to introduce a new Brick House size to cigar lovers nationwide,” said J.C. Newman President, Eric Newman. “The new Short Torp is guaranteed to live up to the reputation of flavor and construction Brick House has earned.”

Originally launched in four sizes, J.C. Newman expanded the line last year by adding Mighty Mighty, a whopping 6” x 60 that packs a mouthful of flavor. The new pyramid shape allows for a concentration of flavors in the head of the cigar, creating an exceptional and unique smoking experience.

The Short Torp will be officially released at the International Premium Cigar & Pipe Retailers trade show in July but Brick House Bash attendees can get a sneak peek of the cigar starting mid-May.

Each cigar is handmade in Nicaragua using the finest Nicaraguan tobaccos and wrapped in a one-of-a-kind Havana SubidoTM leaf. Recently named one of Cigar Aficionado’s top 25 cigars of 2010, Brick House offers one of the best cigars in the world at a price any connoisseur can afford. 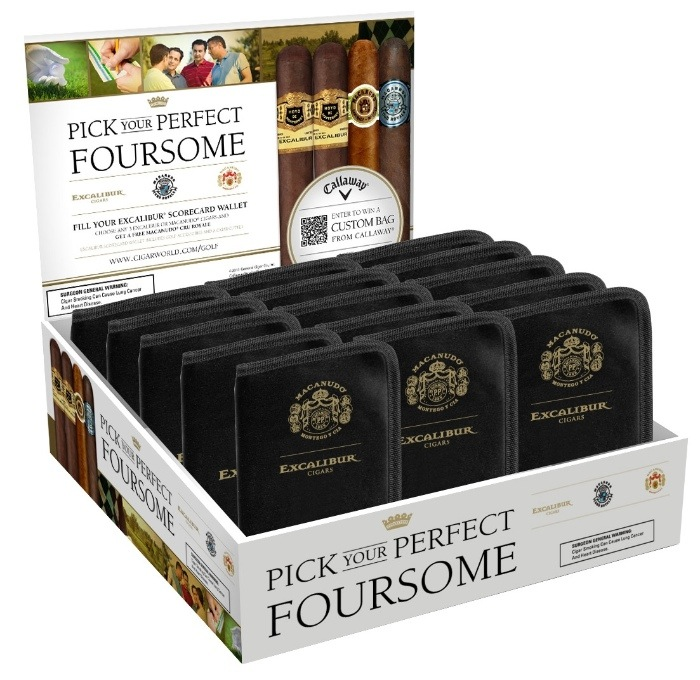 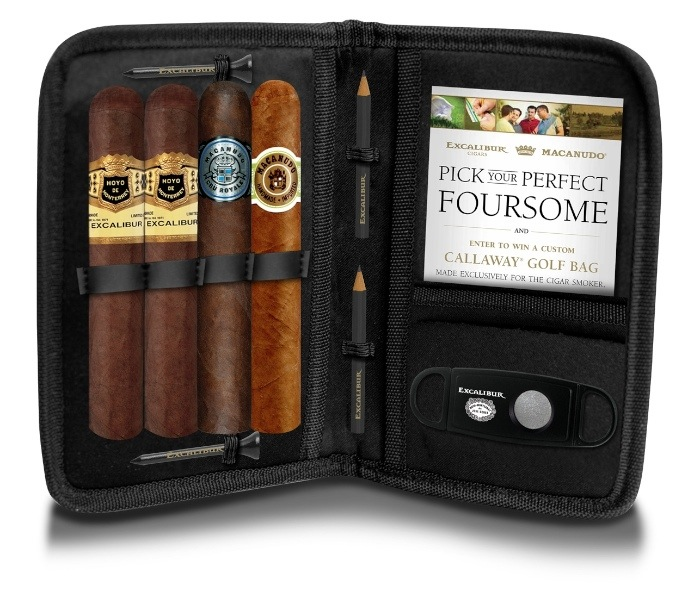 el niño doesn’t golf, but if I did, I presume this partnership with General Cigar Co. & Callaway would be a good thing

Richmond, VA—Macanudo® and Excalibur® are teaming up to make hitting the links even more enticing during spring golf season with the “Pick Your Favorite Foursome Promotion.”

Consumers of legal smoking age who visit participating tobacco shops are encouraged to “pick their favorite foursome” by purchasing their choice of any three Macanudo or Excalibur cigars. With the three-cigar purchase, consumers will receive a complimentary Macanudo Cru Royale cigar, plus a premium Excalibur-branded scorecard wallet/cigar holder containing special golf and cigar accessories, while supplies last.

To sweeten the deal, General Cigar, parent company of Macanudo and Excalibur, is also giving consumers an opportunity to win the ultimate, custom cigar golf bag by Callaway Golf®. Two custom golf bags will be given away each week between now and May 31, 2011. No purchase necessary. For more information, visit www.cigarworld.com/golf.

According to Rick Chandler, director of marketing for Excalibur, “We created the ‘Pick Your Favorite Foursome’ promotion to answer the golf lover’s need for a convenient and portable way to access their favorite cigars on the course. By pairing Macanudo with Excalibur and in allowing consumers to customize the cigars in the pack, cigar smokers have a wide variety of tastes to choose from while they indulge in their passion for cigars and golf. And in giving consumers a complimentary Macanudo Cru Royale cigar in the four pack, we’re making it easy for them to sample one of our best-selling new blends.”

The joint promotion between Macanudo and Excalibur will continue through the summer, with in-store putting events and sponsorship of national and regional golf events such as the Phoenix Open. A complete event listing can be found on cigarworld.com/golf.

Cuban Style cigars contain 100% medium-length tobacco filler, for a slow, even burn. Like the company’s top-selling Nat Cicco Rejects brand.. the filler is extra-select tobaccos, from some of the most prestigious and top-selling brands on the market, including Cameroon, Connecticut, Honduran and Dominican leaf. Although it uses the same machine-bunched filler and binder tobaccos as the Rejects, and is made in the same Dominican factory, Cuban Style’s flavor profile is distinctively different. The two Cuban Style wrapper shades are also 100% top-quality tobaccos, while the binder is homogenized.