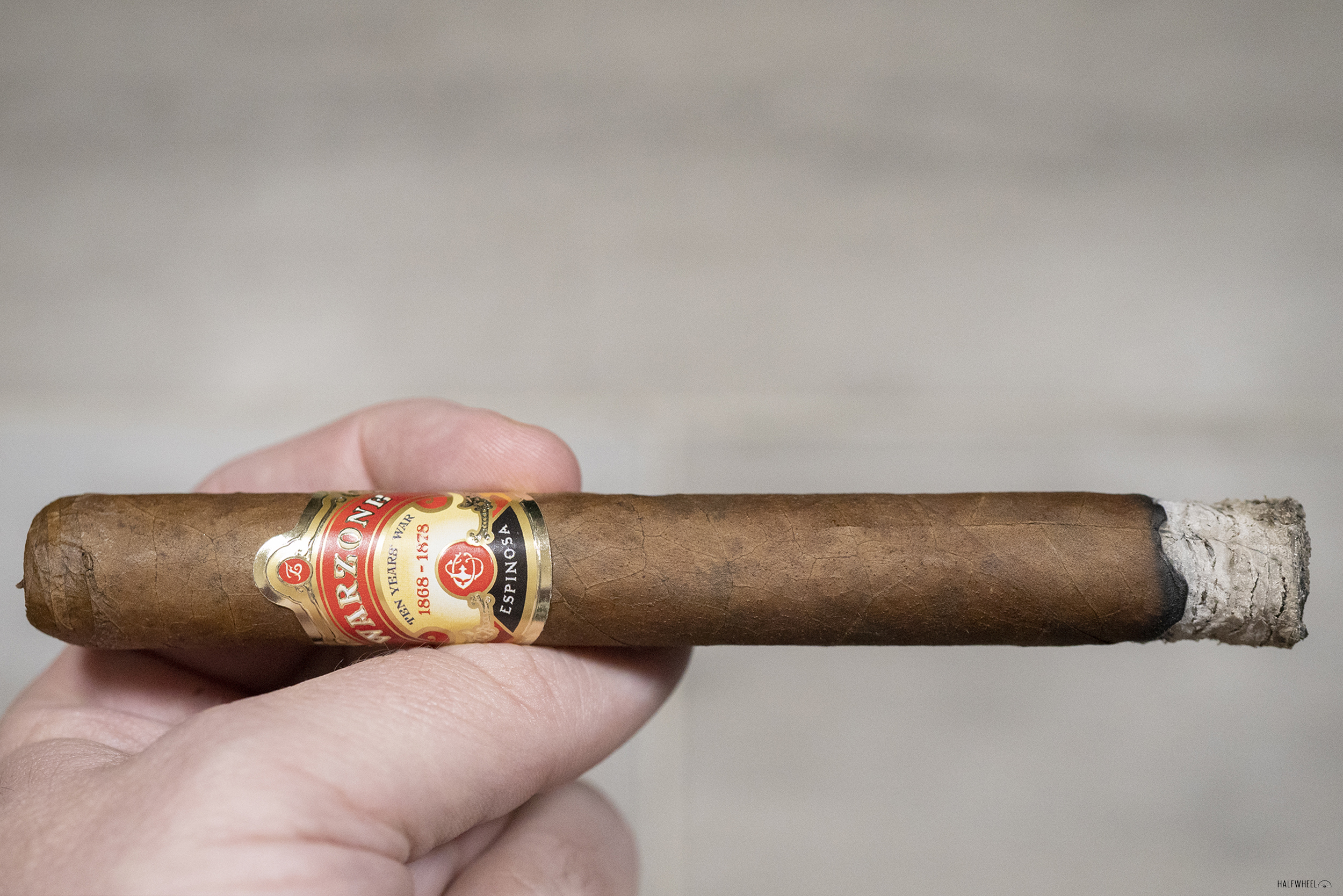 I still remember sitting on a plane at Sky Harbor International Airport in Phoenix in early November 2019 trying to frantically write up and make sense of a fairly major announcement that had just landed in my inbox: that General Cigar Co. and Espinosa Premium Cigars would be collaborating on a new cigar called Warzone.

Not only was it an interesting collaboration, but it marked the first time that Espinosa would make a cigar with a Cameroon wrapper, and it would become one of a growing number of Cameroon-wrapped cigars not made by manufacturers based in the Dominican Republic.

As for the cigar, its name is a reference to the Ten Years’ War, which was fought from 1868-1878 and was the first of three wars that eventually led to Cuba’s independence. The boxes featured artwork of a battlefield that was created by Edin Gutierrez, a Cuban artist who has also done the artwork for Espinosa’s Las 6 Provinicias line.

The blend was created by Erik Espinosa Sr., Erik Espinosa Jr. and Héctor Alfonso of Espinosa Premium Cigars and Justin Andrews of General Cigar Co., and features a Cameroon wrapper over a Honduran binder and fillers from Colombia and Nicaragua. Both companies contributed tobacco to the project, with the wrapper coming from General Cigar Co., one of the largest users of Cameroon wrapper in the premium cigar industry, while the binder and fillers came from Espinosa’s warehouse.

After debuting in box-pressed robusto and toro vitolas in December 2019, the line would return in 2020 with a new box-pressed Short Churchill vitola, along with a limited re-release of the robusto vitola. The Warzone Short Churchill would go onto be named halfwheel’s #18 cigar of 2020.

In mid-September 2022, the third and final size of the Warzone would be released, a 6 x 46 grand corona vitola that is called the Rabito. It is a size that has appeared in other Espinosa releases, including the Espinosa Habano, Espinosa Crema, and Sensei’s Sensational Sarsaparilla, the latter of which is a line created in collaboration with Cigar Dojo. Unlike the other Warzone releases, however, it would be round instead of getting a box press.

“Warzone has been a very successful collaboration, so it should come as no surprise that Justin Andrews and I wanted to end the trilogy on a high note, so to speak,” said Erik Espinosa via a press release when the cigar was announced. “And since Team Espinosa blended our first Cameroon-wrapped cigars with Justin under Warzone, we agreed that we would take Cameroon to another level with our final release. There was no question when we had the blend that embodied our vision…it was like the lights turned on for all of us…we instinctively knew it was right.” 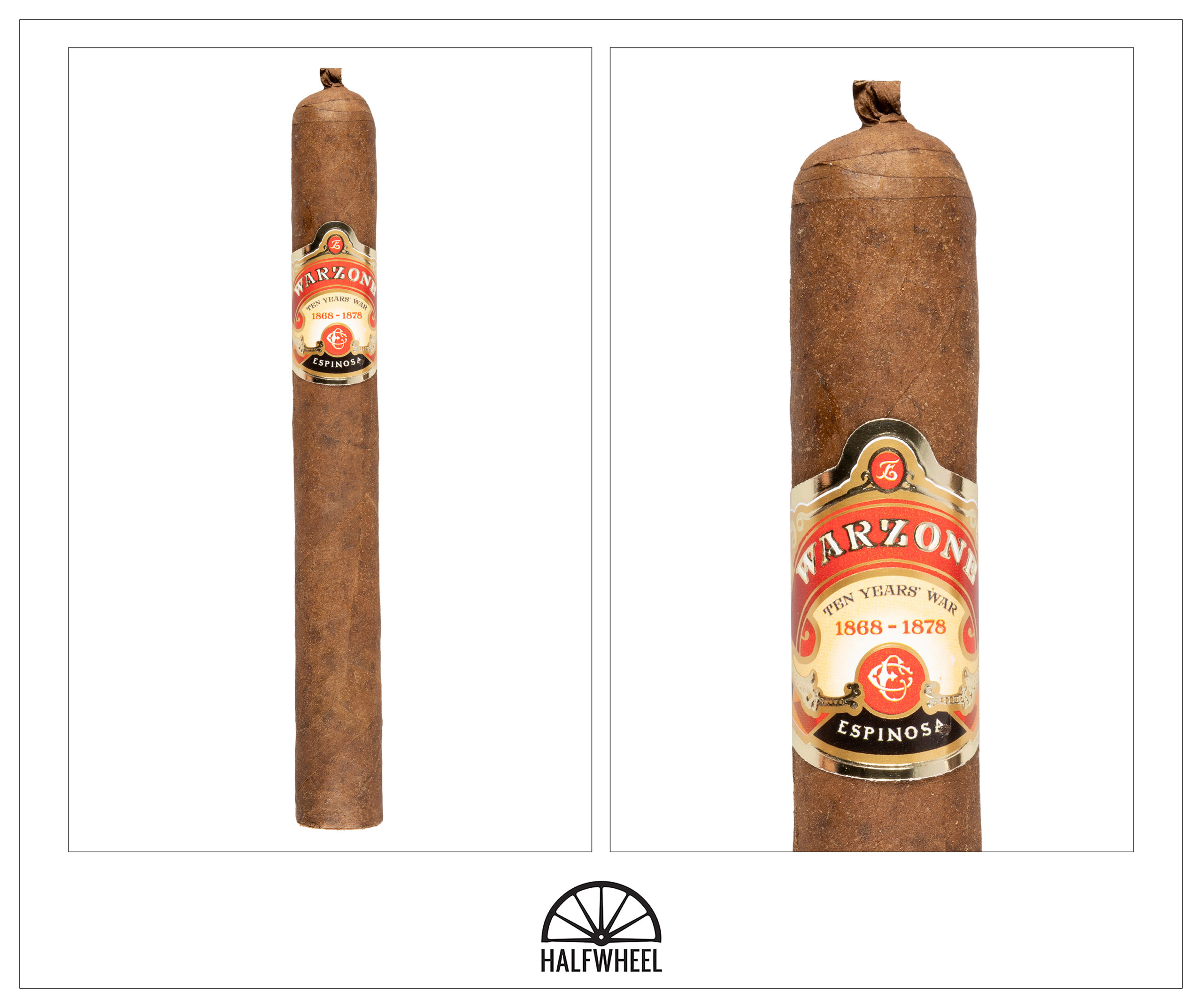 While I don’t like declaring any vitolas as being my favorite, I do really like the Rabito vitola, a grand corona that strikes what I find to be an ideal balance of length and ring gauge. The wrapper has a decent bit of mottling on it, slightly darker spots than what the leaf’s rich, reddish-brown that in certain light reminds me of the clay of a baseball diamond. Altogether, there is a good bit of visual depth to the leaf. There is a bit of oiliness to each of the wrapper leaves, not enough to be glossy, but enough to make the leaves feel supple to my fingers. The cigar is rolled firmly with just a bit of give that shows up in spots that just the slightest bit soft, while from a visual perspective it looks very good with flat seams and well-constructed heads finished off with a little twist of tobacco. The foot has aromas of wheat bread with a light spread of some sort of jelly, and while neither component is particularly dominant, the combination is very pleasant. One cigar has a bit of a wooden cigar box smell to it as well, another familiar and enjoyable smell. The cold draw is smooth and easy, and can either take the bread flavor into a bit livelier flavor of now-toasted wheat bread or thicken it up and soften it out a bit. Regardless, there is less sweetness and now a complementary flavor of freshly cut and dried wood. There is also a decent bit of tingle on the lips from the wrapper leaf.

The Warzone Rabito starts with a profile that is almost exactly what I would expect given the cold draw, as it’s on the dry and toasty end of the spectrum, with wheat toast in two samples a bit more of a sourdough in the third, some woodiness, a decent bit of pepper and not quite as much sweetness as I might have expected. By the time I have time to process the first puffs and write down some thoughts, I detect a touch of spiciness starting to emerge, though it seems to be playing off the other notes rather than standing on its own. Retrohales continue to unfold and get brighter in the nose, and while I can’t quite call them spicy, the sensation that my nostrils get is definitely more reminiscent of spicy food than the black pepper usually found in cigars. There continues to be a toasty, slightly smoky note as the cigar finishes up this section, almost reminiscent of the initial sniff of some Scotches and whiskeys, though without the depth or alcohol of those spirits. Flavor is just north of medium in the first third, occasionally touching medium-full, while body is a solid medium and strength is mild. Construction and combustion have both been very good with no issues.

I’m not quite sure where it happens, but at some point between the very end of the first third and the first couple of puffs of the second third, the Warzone Rabito seems to find and settle into a flavor profile that is medium-plus in flavor intensity and marked by subtle amounts of spiciness along with an almost habano-like profile, though without the intensity of the black pepper that usually comes with that varietal of leaf. Eventually a bit of sweetness comes along by way of a subtle, juicy sensation that has some hints of orange juice or an orange-based sauce, complemented by a bit of damp cedar that bridges into the rest of the woodiness in the profile. As I frequently do, I find myself retrohaling the Warzone Rabito quite a bit, and each one delivers a peppery accent sensation that occasionally dabbles into the spiciness of a subtle, chili pepper sauce. There comes a few points across the three cigars that the retrohales are the only place where I find the spiciness I’m looking for from a Cameroon-wrapped cigar, something I have mixed feelings about as I really want that sensation to be more dominant on my taste buds, and I find myself still clinging to thoughts of what could be called the previous generation of Cameroon-wrapped cigars and the profiles they tended to offer. The final puffs of the second third continue on with a slightly toasty profile and some nuttiness that has developed in fairly recent puffs. I’m not getting quite as much pepper as I did earlier, and while it doesn’t appear as distinctly on puffs, I do get a bit of a peppery sensation on the finish. There also is more earth emerging in the core of the flavor, a slightly damp and rich flavor that gives the cigar a bit more weight on the palate. Flavor is medium-plus for most of the second third, while body is medium-plus and strength is beginning to creep out of mild range though it feels too early to call it medium. Each of the three cigars continue to smoke quite well with no issues or need for touch-ups. 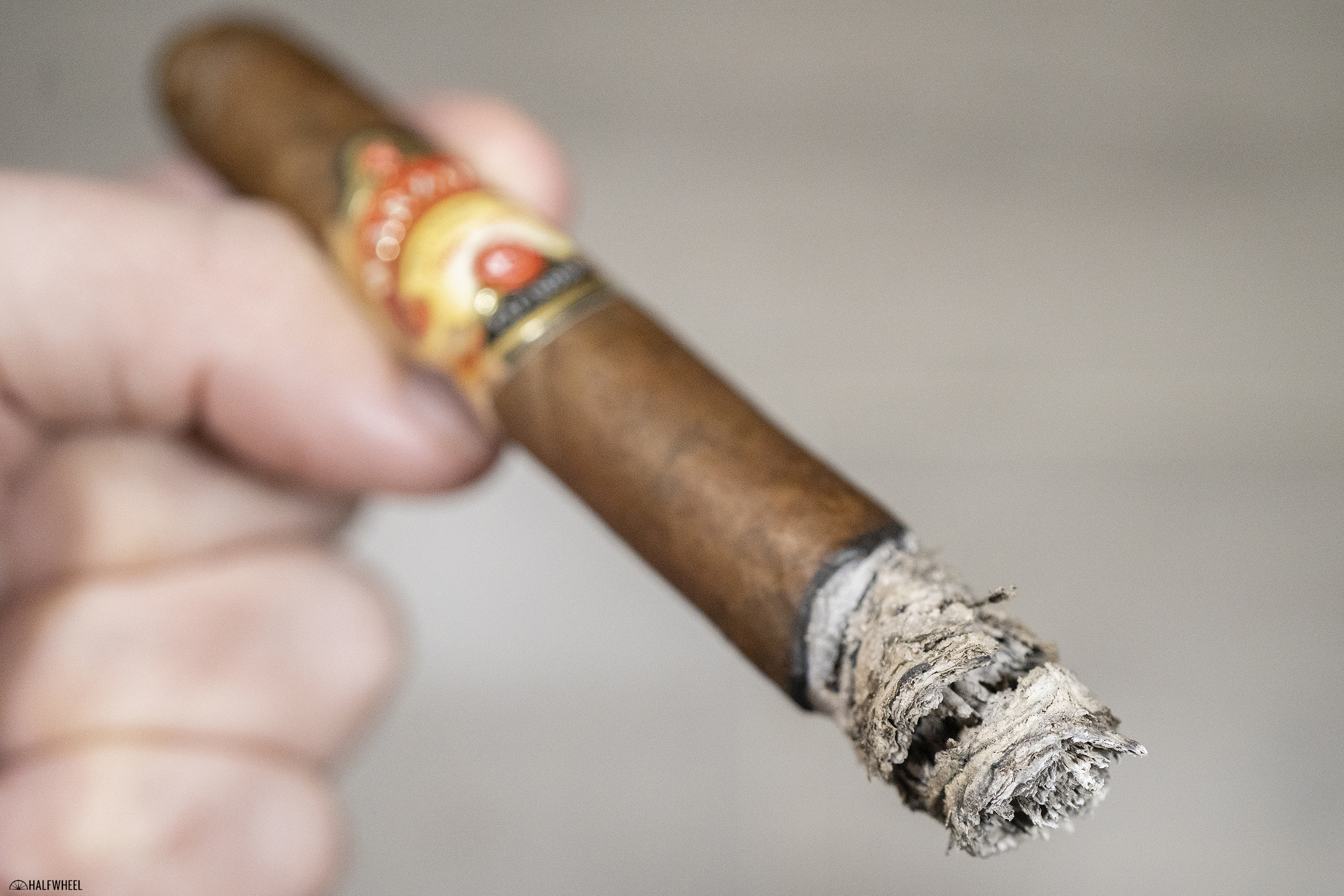 The earthiness that emerged at the tail end of the second third takes a few steps forward to become a bigger part of the profile as the final third gets underway, marking what may be one of the most noticeable shifts since the sweetness emerged in the second third. There is also a bit of creaminess adding to the body of the smoke, while turns thicker as well, almost reminiscent of a hot chocolate but without the sweetness and with a peppery undertone. The spiciness has settled down a bit, certainly a departure from what was offered in the previous section, a change that also means the juicy sweetness is gone from the profile, a change I didn’t really notice until this point. While I’m hesitant to say the final third of the Warzone Rabito gets rough, but it does get a bit rougher than it has been to this point. There’s a bit sharper pepper of medium intensity, while the earth has a bit more rockiness and the wood feels a bit sharper. There are also some puffs where the cigar leaves a bite on my lips seemingly due to a bit of heat coming out of the cigar. The end result is that the cigar finishes with a bit less smoothness than I would like, though hardly enough to keep me from smoking the cigar down to a fairly tiny nub. 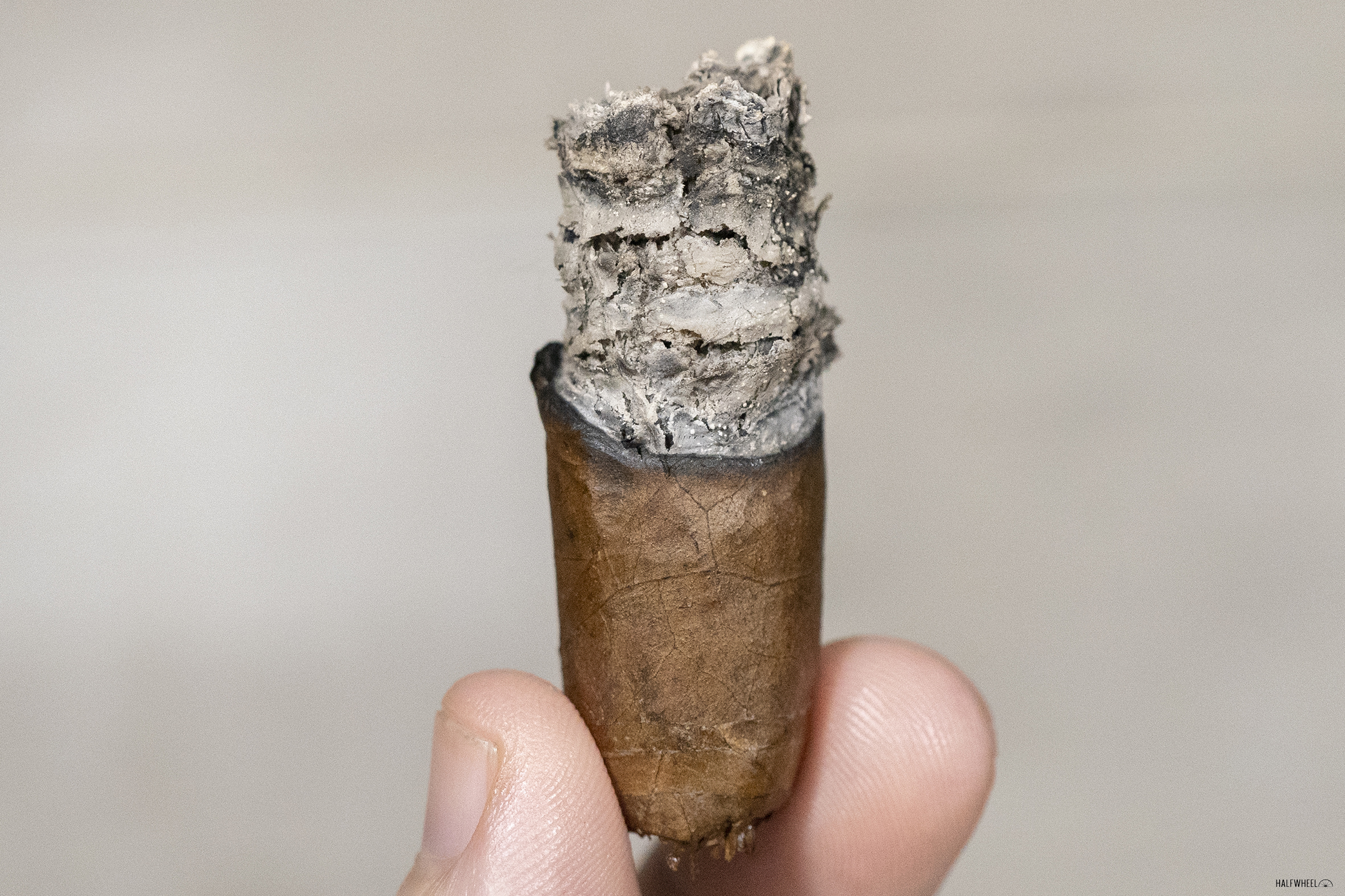 While I do my best to resist placing expectations on any cigar, the Warzone Rabito has certainly earned a bit of a reputation, dating back to when the cigar was first announced and then due to the accolades it has earned since that time. Given that slightly smaller ring gauge, I was expecting a bit more of a prominent Cameroon flavor, though the Warzone Rabito didn't seem too forthcoming with them. One cigar outshone the other two, easily earning a higher score, and showing what I'd like to think the cigar is capable of when at its best. From what I remember, the Short Churchill remains the standout vitola of the line, though the Rabito is easily on par with the Toro and Robusto, making it an enjoyable with which to celebrate the final release in the line.