A Visit to FUMARE

Late last year, Brooks Whittington, Patrick Lagreid and I visited Reno, Nev., specifically FUMARE Fine Cigar Boutique. I had heard stories about Dion Giolito, better known for being the owner of Illusione, sitting behind the counter of a beautiful store and had seen a few pictures, but never been.

Then there was an excuse. On Dec. 13 and 14, FUMARE hosted a pop-up for Craft Wine & Beer, another local retailer, and it seemed like a good reason to travel to the middle of nowhere to go see if the cigar shop was really that impressive. 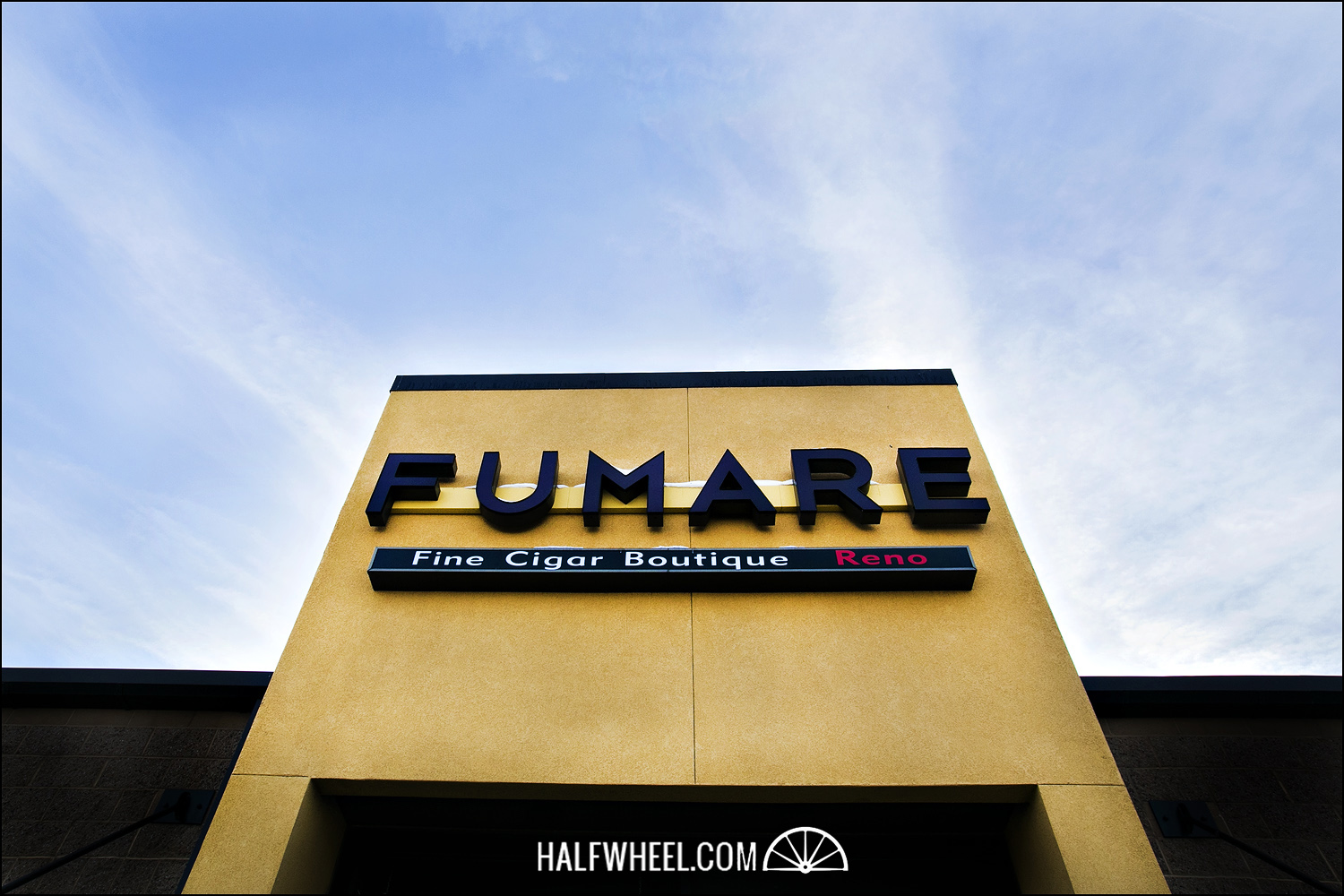 FUMARE is the realization of Gioloto’s meticulousness (OCD) and a lot of years in the making, one that started and continues to be as a retailer. The simplified autobiographical version reads like this:

My life was forever changed when I decided after of two years of college in Oklahoma to come back to Reno in 1988 to be closer to home (Las Vegas) to finish school. I was a theory and composition major back in OK – I wanted to be a film score composer. UNR didn’t have that degree, instead they gave me the same scholarship provided I enroll in the College of Education. Sure, fine I thought. It was shortly after working various part-time jobs that my friend Ansar hooked me up with a gig at the Tinder Box. It allowed me flexible hours for school and allowed me to tour with the band I was in the summertime – I always had a position to come back to no matter what.
I started student-teaching and, hated it. I dropped out of school with around 17 credits left to go. Soon after that, The Tinder Box became a full-time gig. I floundered there for years, tried moving back to Vegas – just didn’t work out so, back to Reno, I came to my old job. In 2004 after almost 12 years of working at the Box, I decided to go out on my own. I got a SBA loan, did it on a shoe-string budget and opened my own store. It was the following year that I decided to bring in a cigar that Pete Johnson had bought from Tabacalera Tropical to liquidate and make a couple of bucks on. I bought practically everything he had. When supplies dwindled, I asked him if he could get me more. 50 boxes were the minimum purchase. “F* me!” I thought.” Oh well, I’ll do it.” I had the cliché on the box changed to 88 – the year I decided to come to Reno. I was a BIG fan at the time of the AVO ~22~ packaging. I designed my private label 88 to resemble that type of cliché, even though my packaging was different.

The next part of that story explains Illusione’s origins.

FUMARE would open in 2004 before there was an Illusione and as the decade ended, Giolito decided it was time for a new space, literally. He told me he spent over two years refining the details for a cigar and FUMARE opened at its current Longley Ln location in the summer of 2011, right before the 2011 IPCPR trade show. (I best remember Giolito for literally running around the show dealing with ordering for FUMARE and even mentioned it in this post from the show.) It starts with a big open design, two stories, one ceiling and a huge wow factor. There’s an upstairs lounge with a poker table and off in the distance, Giolito’s office, but most the store is kept downstairs to the left of the humidor.

Facing the entrance is an espresso bar, which while we there looked like an actual bar when thanks to the Craft pop-up. Any other day of the year, a few styles of coffee are available for purchase, but no alcohol. Accessory cases, the register and then the humidor—big, not massive. Stone floors, lots of Illusione, Davidoff, Joya de Nicaragua and some hidden gems. There are also things like Rex, La Grand Classe and other FUMARE exclusives that Giolito is tinkering with. The state has a 30 percent wholesale tax on cigars, which makes prices a bit higher, but the store was busy and there was oftentimes a line at the register.

Immediately outside of the humidor, across from the espresso bar, is a wall of pipes and lockers. While there was a moderate selection, Giolito says most of the serious pipe smokers find a better selection at the local Tinder Box, which is why he sends a lot of pipe smokers there. As for the lockers, they are not sold, rather given to the better regular customers. There are a few islands for humidors. Once interesting note is that it appears the humidors that are on display are actually display humidors. A few humidors were sold when we there and each time a staff member went and pulled one out of storage to give to the customer, which meant the “cigar shop” smell was not included. The lounge is medium-sized, although feels tiny in the palatial shop. On the snow days we were there, it was nearly full by lunch-time and packed by mid-afternoon, although the Craft pop-up might have had something to do with it. There is no television as Giolito does not like the noise, distraction and environment it promotes. FUMARE is impressive. It’s not the classical style of Nat Sherman, nor the über modern of Davidoff’s retail outlets. It’s meticulous. A modern cigar store, planned out to the inch and beautiful to look at. There’s lots done different, lots done right and lots of hidden ingenuity.

In the wake of many manufacturers complaining about the retailer-owned Sindicato, the cigar world collectively has become much more conscience of those companies who produce and sell cigars. There is Altadis (JR Cigars), General Cigar Co. (Cigars International), Ashton and Fuente (Holt’s), Rocky Patel (Burn by Rocky Patel), Davidoff, Nat Sherman, 7-20-4 (Twins Smoke Shop) and many others, but do not confuse Dion Giolito with the above.

More often than not, you can find Dion Giolito working the register at FUMARE, it’s his job. He is arguably a retailer, then a cigar manufacturer. He knows what’s in the humidor, what’s moving, when it came in, what that customer likes, the name of that customer’s child. It is something that almost none of his manufacturing peers can lay claim to, and it’s probably completely overlooked.

If you want to know the secret to Illusione, it’s FUMARE.