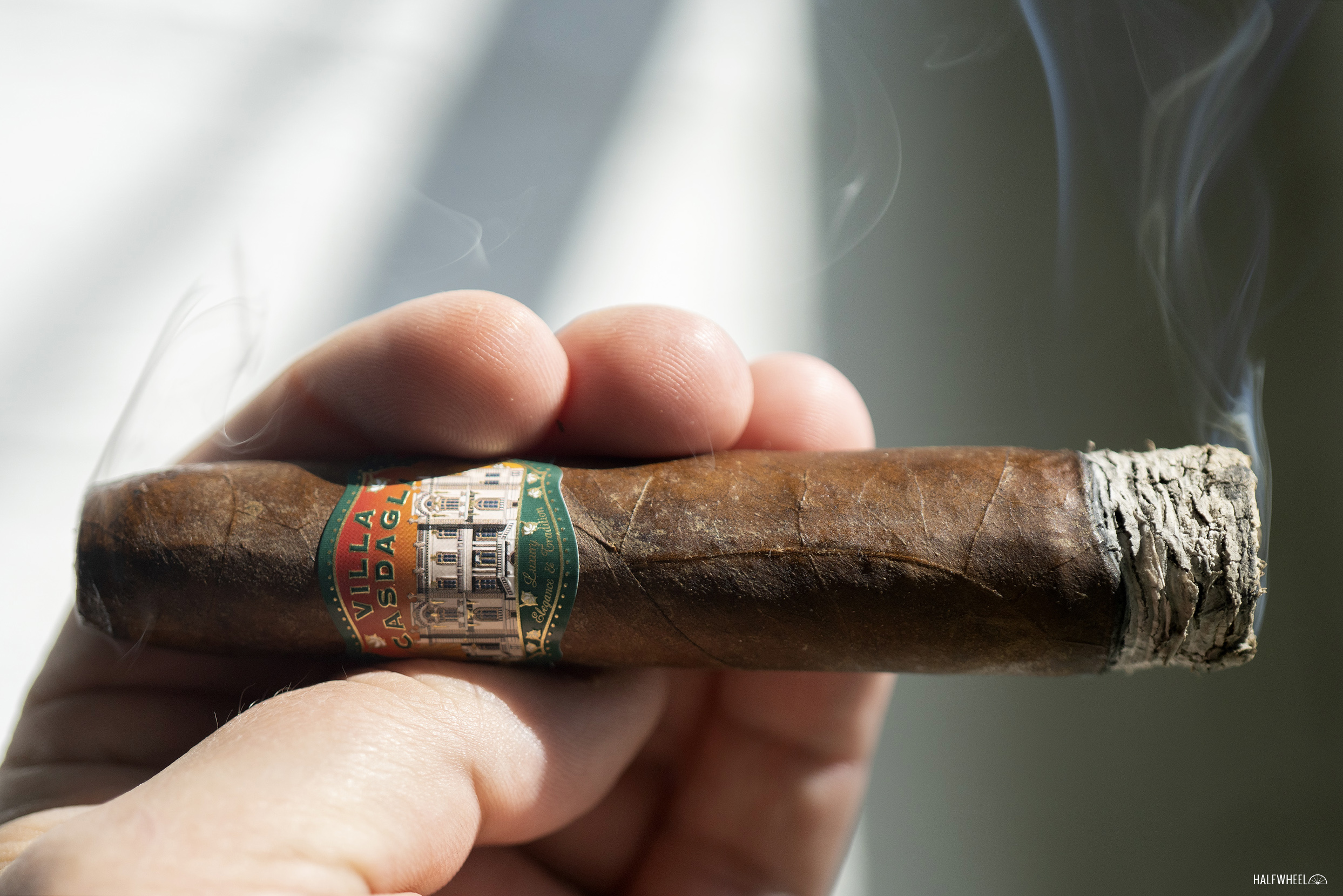 In May, Casadagli Cigars announced a brand new line named Villa Casdagli, after the home of Emmanuel Casdagli, a Greek businessman who began the family’s Cairo-based cotton business in the late 19th century. It was shown off during the Tobacco Plus Expo (TPE 2021) trade show in Las Vegas in May and began shipping to at least six stores in July ahead of its official debut at the 2021 PCA Convention & Trade Show.

Blend-wise, the Villa Casdagli is actually a modified version of the Daughters of the Wind Robusto, which was released for the first time in December 2018. The Villa Casdagli—which is rolled at the Tabacos de Costa Rica S.A. factory—incorporates an Ecuadorian wrapper covering a binder from Ecuador and a combination of filler tobaccos sourced from the Dominican Republic, Ecuador, Nicaragua and Peru. However, the ratio of tobacco used in the filler are different for each vitola; for example, the Robusto and Pigasus sizes include two Peruvian fillers, while the other two vitolas only feature one.

One of the aforementioned vitolas with two Peruvian fillers is the Pigasus, a 5-inch figurado that tapers from a 58 ring gauge at the foot to 54 at the cap. According to Casdagli website, the Pigasus size actually has a historical connection to the company:

This figurado replicates the original Flying Pig vitola that goes far back into the history of Casdagli Cigars. It was one of the first ones to be bespoke created for Bespoke Cigars (Casdagli Cigars predecessor) in 1990s Cuba. 4 of the 6 tobaccos go through a “mejorado” improvement process. This is a second fermentation in a “pilon” for a further 2-4 months before the master blender is totally satisfied.

There are four different vitolas in the Villa Casdagli line, all of which are packaged in boxes of 12. 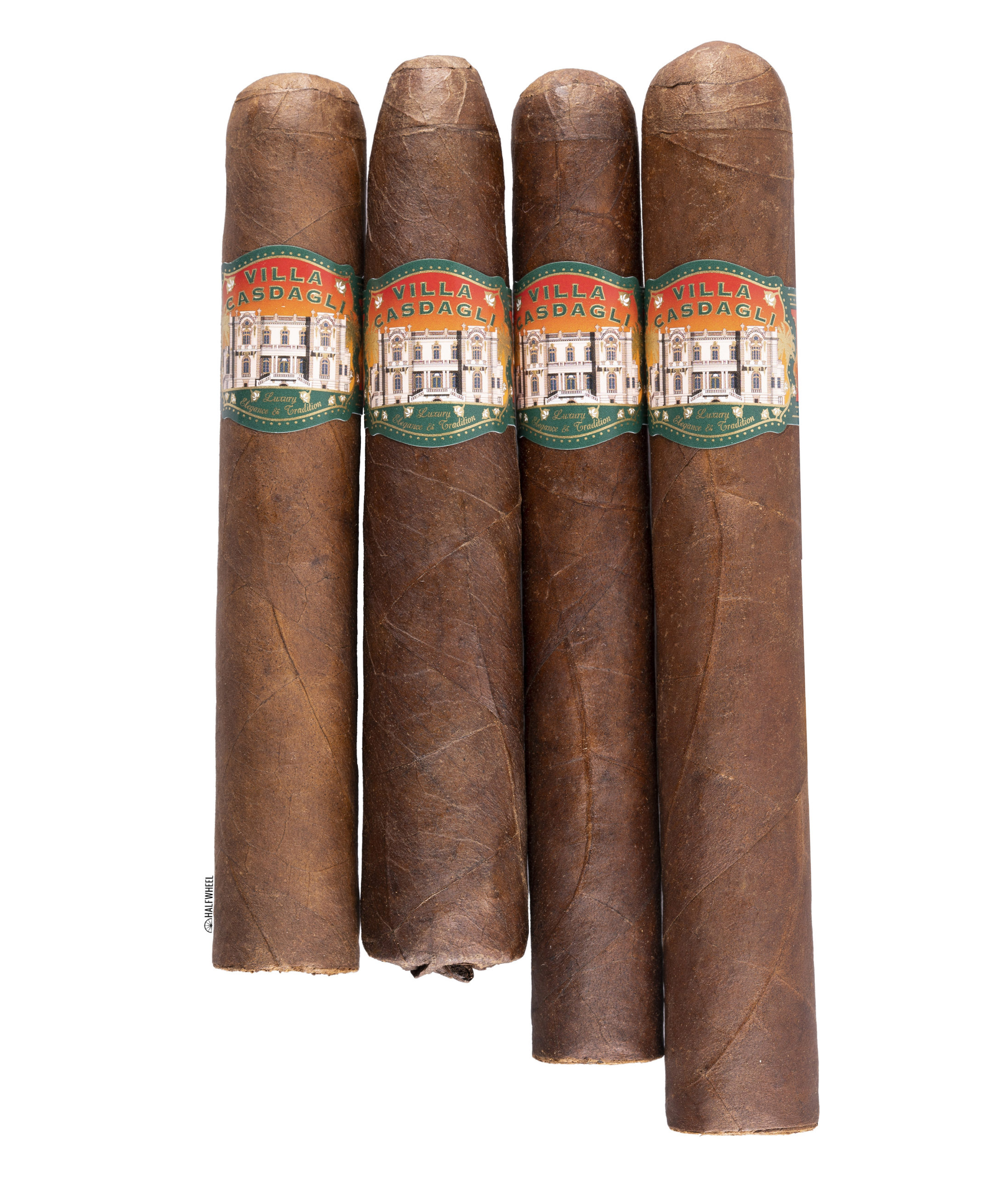 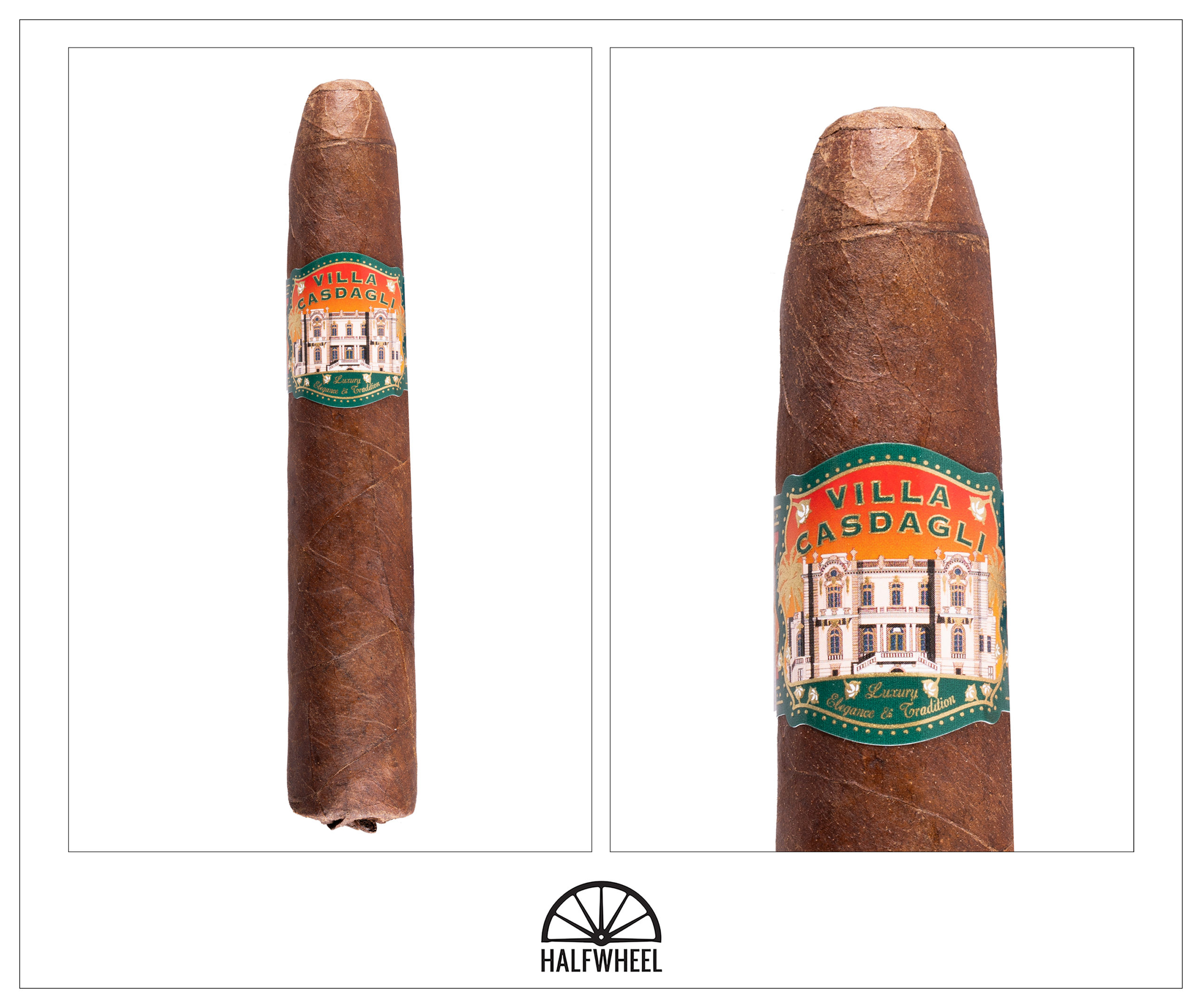 While the band is a bit non-descript—albeit quite colorful—the espresso brown wrapper covering the Villa Casdagli Pigasus is one the most attractive wrappers I have seen in quite a while with a noticeable reddish tint and oil to spare. The vitola is different enough to be unique without being obnoxious about it and the twisted covered foot is a very nice touch. One cigar has a small soft spot just under the band, but the other two are problem-free in that regard. The aroma from the wrapper is a combination of generic wood, barnyard, hay and earth while the foot brings notes of strong sweetened cereal, leather, vegetal, manure and oak. Finally, the cold draw features flavors that remind me of strong cocoa nibs, creamy oak, gritty earth, roasted coffee beans, hay and rich raisin sweetness.

Because of the covered foot, the first puff I taste after toasting the foot is a bit different than the rest and reminds me instantly of graham crackers. That does not last very long; as the filler fully catches fire, the first third’s main flavors of creamy oak and creamy cashews become obvious, followed by secondary notes of cocoa nibs, dry tea leaves, earth, anise and a touch of lemon peel. The retrohale starts off with some significant white pepper, but that recedes quickly, leaving behind some very distinct maple sweetness. Construction-wise, both the burn and draw are fantastic out of the gate—with neither showing any overt signs of having issues any time soon—while the smoke production is well above average off of the foot. Flavor is close to full, body is between mild and medium while the strength ends up below the medium mark but still increasing.

While the second third of the Villa Casdagli features some changes in the secondary notes—a list that now includes cloves, sourdough bread, cocoa nibs, earth and slightly more citrus—oak and creamy cashews continue to be the standout flavors in the profile. In addition, although the amount of white pepper on the retrohale remains about the same compared the first third, the maple sweetness has increased noticeably and shows no signs of slowing down any time soon. In terms of construction, two of the samples continue giving me no issues at all, but one cigar’s burn wanders enough that I am forced to touch it up twice, once at the beginning of the third and once right before it comes to an end. Flavor has bumped up to full and body is just under medium, but the strength has only increased a small amount by the end of the second third, ending very close to the medium mark. 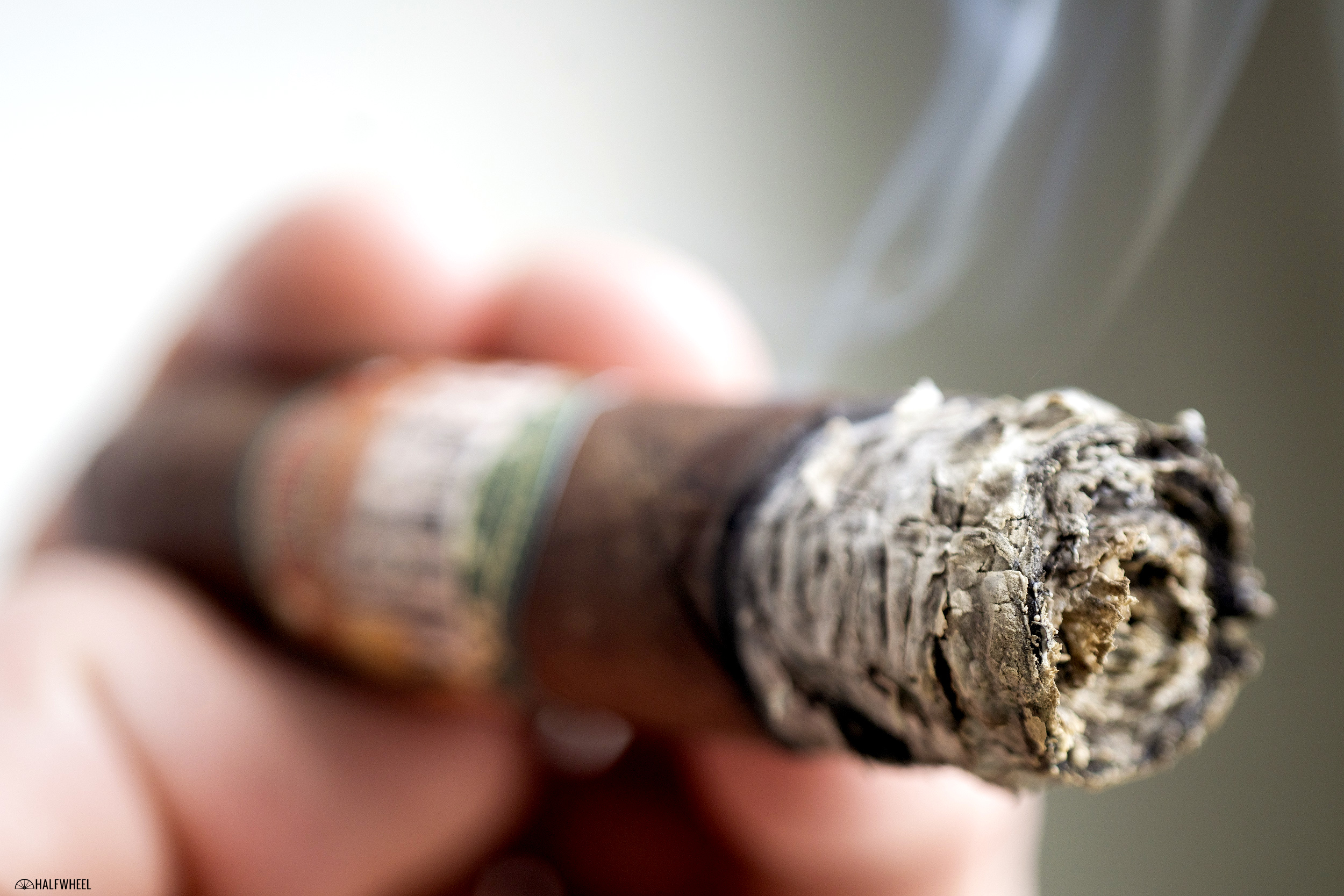 The final third of the Pigasus is essentially a continuation of the previous two thirds, something I am not upset about in any way. Main flavors continue to be a very flavorful combination of oak and creamy cashews, followed by notes of powdery cocoa nibs, espresso beans, hay, earth, bread, cloves and citrus peel that flit in and out at various points. In addition, the flavors on the retrohale have seemingly switched places compared to the second third with more white pepper and less maple sweetness, although there is still more than enough of the latter to positively affect the profile. Flavor ends full, body is medium and the strength managed to hit a solid medium just before I put the nub down. Finally, the burn has evened up very nicely and give me no more issues, while both the draw and smoke production continue on their excellent paths until the end of the cigar. 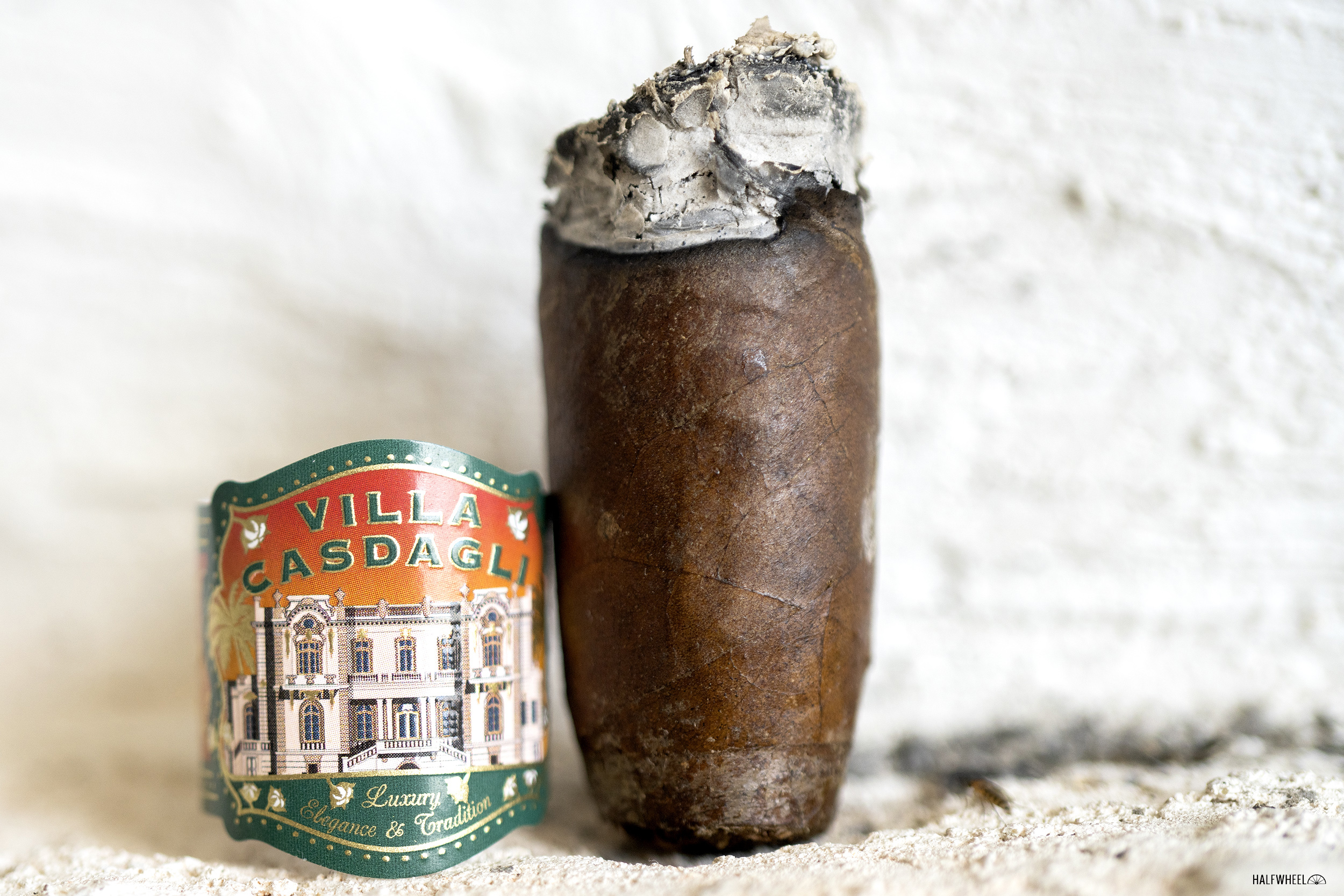 Creamy, sweet and extremely well-balanced, the Villa Casdagli checks off just about every point I am looking for in a cigar. As if the main flavors of distinct oak and creamy cashews were not enough, there is also plenty of white pepper and maple sweetness on the retrohale along with some very nice citrus at various points throughout the cigar. While I have not smoked any of the other vitolas, the Pigasus size is a pleasure to smoke, with good construction and a blast of graham crackers in the first few puffs due to the covered foot. In the end, the Villa Casdagli is a flavor bomb that should more than satisfy those looking for a well-blended, medium-strength smoke.