If there’s a company that seemingly has had no trouble coming up with new cigar lines, it’s Viaje. While the company offers traditional lines such as Oro, Platino and Exclusivo, it also has an extensive list of limited editions, many of which are annual releases that have tie-ins to holidays, seasons or have just found their own place on the calendar.

Between the two, the Zombie has a longer history. The company released its Zombie line in 2011 as a follow-up to its Skull and Bones WMD and MOAB cigars, explaining that the name came from people’s transitions to zombies after being exposed “to the radiation from the WMD release.”

This isn’t the first time that the Zombie name has crossed over to other lines in Viaje’s portfolio. The Zombie moniker has been used to create the Zombie Super Shot, as well as standalone offshoots such as the Zombie Antidote and Zombie Biohazard.

As for the Farmhand Andre line, it debuted in October 2019 as an extension to the company’s Thanksgiving-themed Stuffed Turkey line. That cigar was a 7 x 52 Churchill and featured an illustrated image of brand owner Andre Farkas, with the story that Farmhand Andre helped Farmer Bill Hatchet get the turkeys from the farm to your table.

The Stuffed Turkey line debuted in 2011, the same year as the Zombie, and then added two variants, the White Meat and Dark Meat, with Farmer Bill Hatchet appearing in 2014. He got his own Zombie spinoff in 2016. As should be expected, all of those cigars have generally been released closer to the Thanksgiving holiday.

The Viaje Zombie Farmhand Andre is a box-pressed robusto measuring 5 1/2 inches long with a 54 ring gauge and comes packaged in 10-count bundles. The company has not released any specifics about the blend or the factory that made the cigar. Viaje’s Zombie Farmhand Andre has a pretty firm box press that gives it the candy bar shape that often gets referred to when describing such vitolas. The wrapper is a brown shade that reminds me of tree bark more than earth, looking rustic in a few spots with some mottling, its flattened veins and a visible seam line that interrupts the visual continuity ever so slightly. Truth be told, however, I would suspect most of the attention will be captured by the band. The box press gives the cigar the pillowy firmness that is often found with this treatment, with a bit more give front-to-back than side-to-side. Aroma off the covered foot is sweet enough to catch my attention, both out of a bit of surprise but also because it’s just plain enjoyable. After that, there’s a bit of woodiness and what makes me think of a bran cereal, with the tail accented by some light pepper and dry tobacco. Air moves without issue on the cold draw, with samples on both sides of my ideal. It has a bit of the bran cereal flavor and the same kind of sweetness I find in Raisin Bran raisins or those in traditional trail mix. Otherwise, it is fairly neutral, and most notably doesn’t offer much if any pepper at this point.

The Viaje Zombie Farmhand Andre gets started with a slightly sweeter taste than I generally think of Viaje profiles offering; it’s far from overt and fairly fleeting as the profile gets more wood and earth forward, but it is an enjoyable beginning. An early retrohale full of black pepper helps to dash that beginning as well, especially from the one sample that is far more pepper-forward than the others. A bit of campfire emerges as the burn line gets to the one-inch mark, making the profile a bit more savory and substantially more complex. It also continues to be a bit lighter profile than I would have predicted, almost taking on a bit of oatmeal at times. A bit of nuttiness comes into the profile after the first clump of ash falls and the cigar begins its approach to its second third. Technical performance is good all around, with flavor and body both medium-plus, while strength is closer to medium so far. 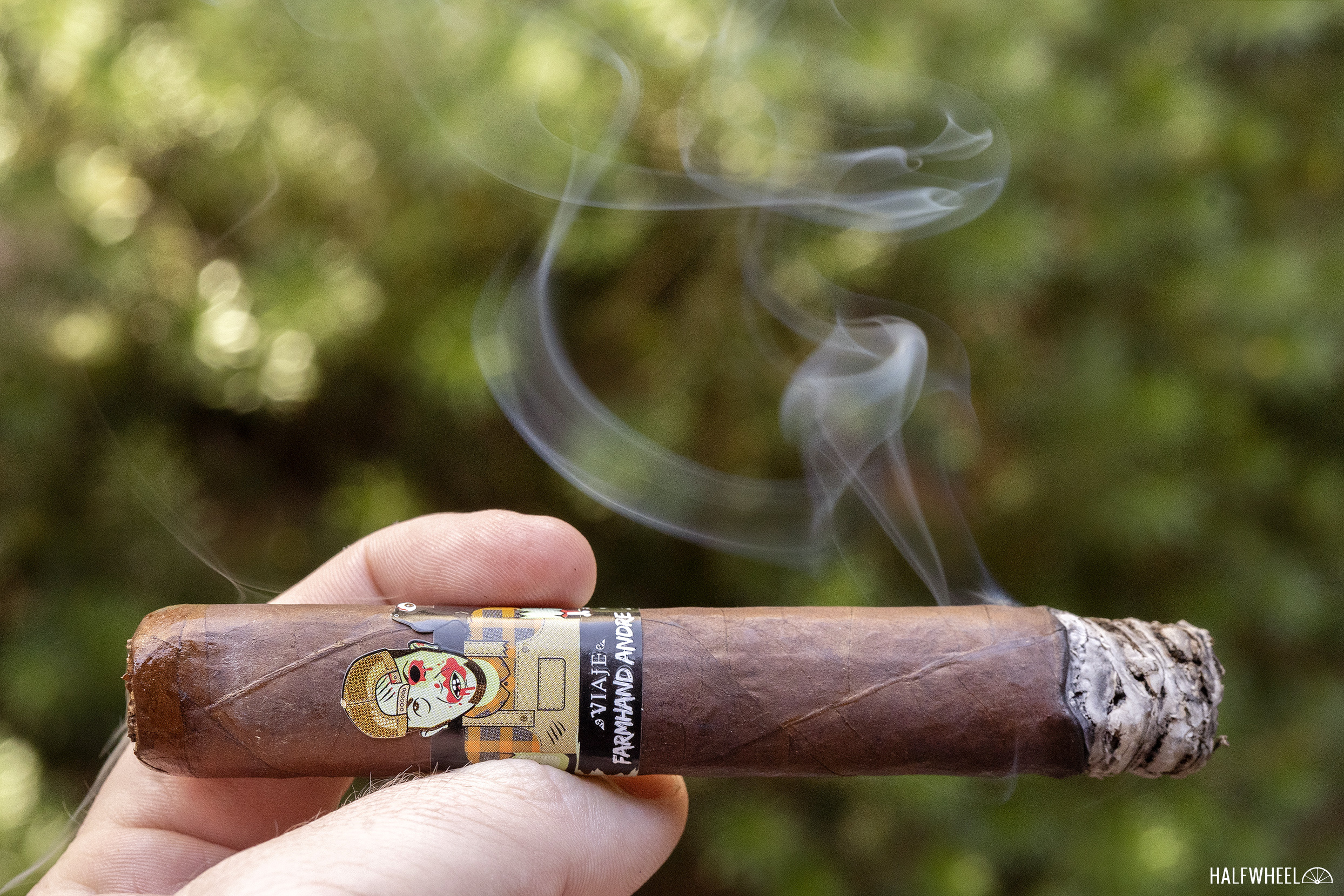 The second third’s beginning starts to see a gradual shift to a bit more body and a more robust flavor profile. It’s slow in two samples and more pronounced in one, and there are cases to be made that both are enjoyable. In some cases it’s a familiar earth, while other times I get more tree bark and black pepper, which comes with a bit more robustness but delivers a more engaging flavor experience, tingling the taste buds as well as the roof of my mouth and upper part of my throat. There’s a bit more earthiness in the profile as the burn line passes the midway point, and with it comes some rockiness and pepper, a combination that toes the line between really stimulating the taste buds and irritating them. Thankfully it spends most of the time on the right side of that line, though one sample does overstep more than the others. Retrohales are bright with white pepper, offering a quick zing before quickly fading. The technical aspects are still performing well, while flavor intensity and strength are both medium or just north of it, while the body is medium-plus. It feels like the draw tightens up just a bit at the start of the final third of the Viaje Zombie Farmhand Andre, it’s not plugged or challenging, but rather I feel just a bit more resistance than I had previously. Thankfully it doesn’t seem to affect combustion or smoke production. If trying to peg the flavor on the mild to strong scale, it still feels like it’s medium at best, with a bit of cashew and white pepper, while the one noticeably stronger sample is still delivering hearty amounts of earth and a more potent black pepper. The final puffs bring about a dry woodiness that quickly dries out the mouth and leaves a lingering tingle on seemingly everything it can, occasionally getting sharper than I would like, but again, generally staying on the right side of the line. The burn is straight and even until there’s about an inch and a half left when it goes just a bit askew, but it doesn’t prevent an otherwise enjoyable finish. Flavor is medium-plus to full depending on the sample, body is close to full, and strength is near full if not outright full in one sample. One of the things we value most at halfwheel is consistency among the samples we smoke for reviews, a point raised because I had this final summary more or less written in my mind after the first two samples, only to have to proverbially yank the paper out of the typewriter and start over, as if a bottom of the ninth inning base hit sent the baseball game into extra innings. The first two samples of the Viaje Zombie Farmhand Andre had me thinking that this might be a somewhat new direction for Viaje, offering an interestingly milder cigar than what might be expected from the company with a reputation for fuller-bodied cigars, and one with impressive balance, restraint and nuance. The third cigar is much more what I would expect from Viaje, yet to me it's not the best the cigar has to offer. If anything, the third sample makes me wish I had paid closer attention to the other two, as they were much more unique and thus more worthy of praise. As the score should suggest, the overall experience of the three samples was good, and if anything the Zombie Farmhand Andre is Viaje I would pick up to either smoke in the moment or just to have in my humidor. That said, I just wish I knew which version I would get, and which makes me hesitate a bit in giving it a full recommendation. That said, it remains a cigar worth trying, and even one worth picking up a couple of, if nothing less for the hope of experiencing a slightly different side of Viaje.