When an artist develops a franchise, the inevitable challenge is how to keep it going from installment to installment. Whether it’s movies, albums or cigars, the creators behind such projects are tasked with the challenge of ‘moving it forward’ while staying fresh and relevant. In the case of the cigar world, this seems to apply to a number of lines, not least of which is the Viaje Zombie line from Andre Farkas.

The original Zombie line was said to be “born out of WMD” and was a descriptor of the effect that one gets from having smoked a Viaje WMD or MOAB. It was released in April 2011 to BURN and Tobacco Grove in Minnesota and generated an immediate reaction among both fans and naysayers. Since then it has been an annual release with the line expanding to two versions in 2013, a different pair of versions in 2014 and now the Zombie antidote, which is said to be the ‘cure’ for those who have smoked too many Zombies.

Slight variations in size have occurred along the way, and the Zombie Antidote is no exception: it is by far the longest and skinniest of the Viaje Zombie series, and comes in one of the more unique packaging formats the company has used to date: a plastic jar with a medical theme to do it, describing the cigars as being single dose syringes being supplied by Dr. A. Farkas of Viaje Pharmaceuticals.

Much like the Zombie Super Shots, the Zombie Antidote was a widespread release to all authorized Viaje retailers, and when it shipped in late May, numerous retailers mentioned to halfwheel that it was what they received the most of in that shipment, which also included the 2014 editions of the Roman Candle, Skull and Bones FOAB, MOAB and the limited edition Viaje Skull and Bones Cloudmaker, the latter of which was only sent to certain accounts.

With the addition of the Viaje Zombie Antidote, the line now stands at nine releases. Additionally, Farkas has indicated via Facebook that there will be subsequent annual releases of the Viaje Zombie Antidote, though they will not use the same bands that appear on this release. The wrapper leaf is an even dark brown with varying degrees of sheen from its oils, as some samples have a fairly nice bit of gloss while others appear almost dry. Some small veins snake their way along the cigar, while some samples have a bit of jaggedness along the seams that call attention to the chaveta work of the roleros. There are a few scattered spots across the samples where the Zombie Antidote feels a bit soft and shows a touch too much give for my liking, but that is never reflected in the draw of any of the sticks. The band certainly stands out with its bright white base and blood red cross; it’s fairly clear that the color scheme wasn’t done to match the wrapper leaf. The pre-light aroma is a bit of a challenge to pick up with the small foot, though there are notes of roasted coffee beans with backing notes of chocolate, leather and earth. The cold draw is a bit firm, and flips the flavors that the nose picked up as it is highlighted by a great notes of rich chocolate that is backed by a bit espresso, a touch of wet leather and no spice.

Early notes of fragrant coffee and rich earth stand out, notes that both suggest fairly strong Nicaraguan tobacco. The first hit of pepper varies its arrival from sample to sample: it’s almost a non-factor until an inch or so in on the first cigar while on the second it gets going right out of the gate, and subsequent cigars show the same variation. Either way, whenever it arrives it becomes more prevalent with each puff. Early retrohales are limited to small amounts due to the pepper component, which are certainly strong and almost defeat the purpose of retrohaling, which is to enhance the flavors picked up via the taste buds. For the most part the ash isn’t particularly strong in the first third, breaking off at what seems like just under half an inch and then a very noticeable crack at about the same length. About an inch into the Antidote, there’s an interesting flavor shift with the coffee and earth stepping aside to make room for a cleaner and chalk-based pepper note that sits atop a roasted beef note.  That too is fleeting, as the base of the smoke lightens up and thins out a bit as the burn line heads for the second third. The second third starts off with a quick shift to a powdered chocolate note that has me thinking I should make myself a glass of chocolate milk. Pepper remains a fairly constant component in the flavor profile, but into the second third there has developed a certain level of familiarity with it, which when coupled with the touch of sweetness being offered keeps it from being overbearing for most palates. The retrohale is a different story though, as there are loads of table pepper on a retrohale at the midway point — it’s manageable but only for those wanting to challenge themselves. One sample showed a touch of harshness, which could be attributed to either the blend or its age, something that isn’t a huge detractor and could end up resolving itself with enough rest. Flavor and strength both pick up in the transition to the final third, with the cigar adding some pepper and nicotine that helps wake up the flavor quite well, though it seems to be coming with a flavor trade-off. 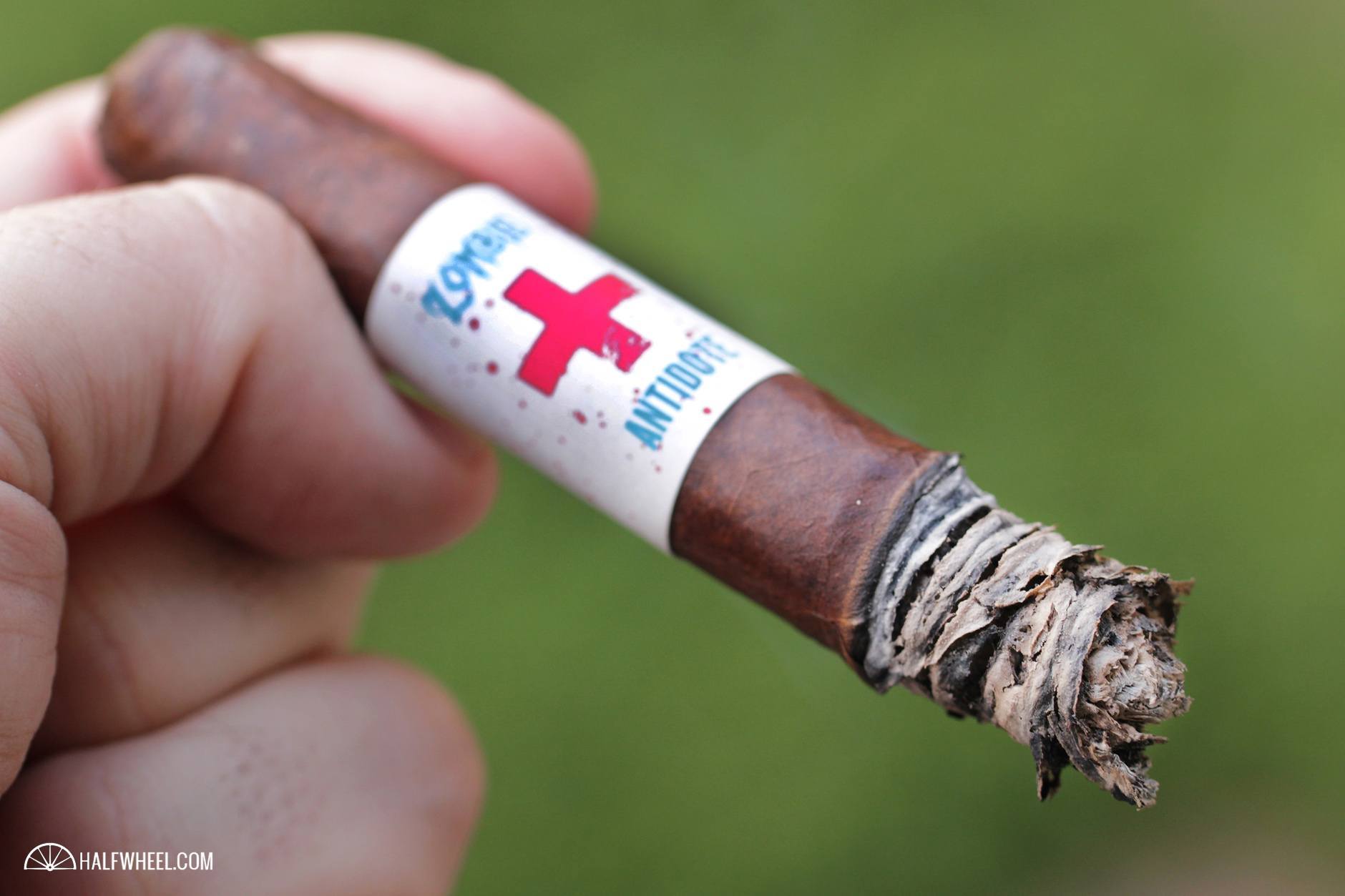 With the band removed and the burn line in the final third, the strength picks up but it also comes with a touch more gruffness to the flavor that starts to border on harshness. If the second third of the Viaje Antidote was the spoonful of sugar to make the medicine go down, the final third starts off with notes of the actual medicine itself: mineral-laden earth, a touch of pepper and some notes that are both sour and charred that leave a less than thrilling aftertaste. It’s a good number of puffs where that sensation is prominent, though it stops short of being completely overbearing and crashing the cigar’s progress. Retrohales in the final third prove as peppery as the cigar has offered and with a touch of added heat make it that much tougher to get through the nostrils without an adverse reaction. There are no burn issues to keep the cigar from being smoked down as far as you want, or more appropriately, as far as your senses can handle. While I haven't smoked all of the other eight Zombie releases, I have had numerous good experiences with the Zombie Super Shots and have generally found the other Zombie releases I've smoked to be enjoyable. The Zombie Antidote is no exception, particularly when the chocolate sweetness comes out and gives the cigar its highest level of complexity. Parts of the final third did leave a bit to be desired, though given how Viaje's releases tend to go through pretty noticeable flavor shifts in the first three to six months following release, I'm really hopeful that time will work its magic and even that portion out a bit, which will in turn boost the overall impression of the stick. That said, this is a cigar that is pretty enjoyable at the moment and does an admirable job pushing the Zombie story forward, if nothing less than by its departure in vitola and the way that the profile is affected. With the relative availability of the Zombie Antidote, it's certainly worth giving a try if you like the earthy, peppery and sometimes gritty profile that the full-bodied Zombie blend offers. Would I go so far as to say it is a special cigar from Viaje? No, but that doesn't mean it isn't still enjoyable.