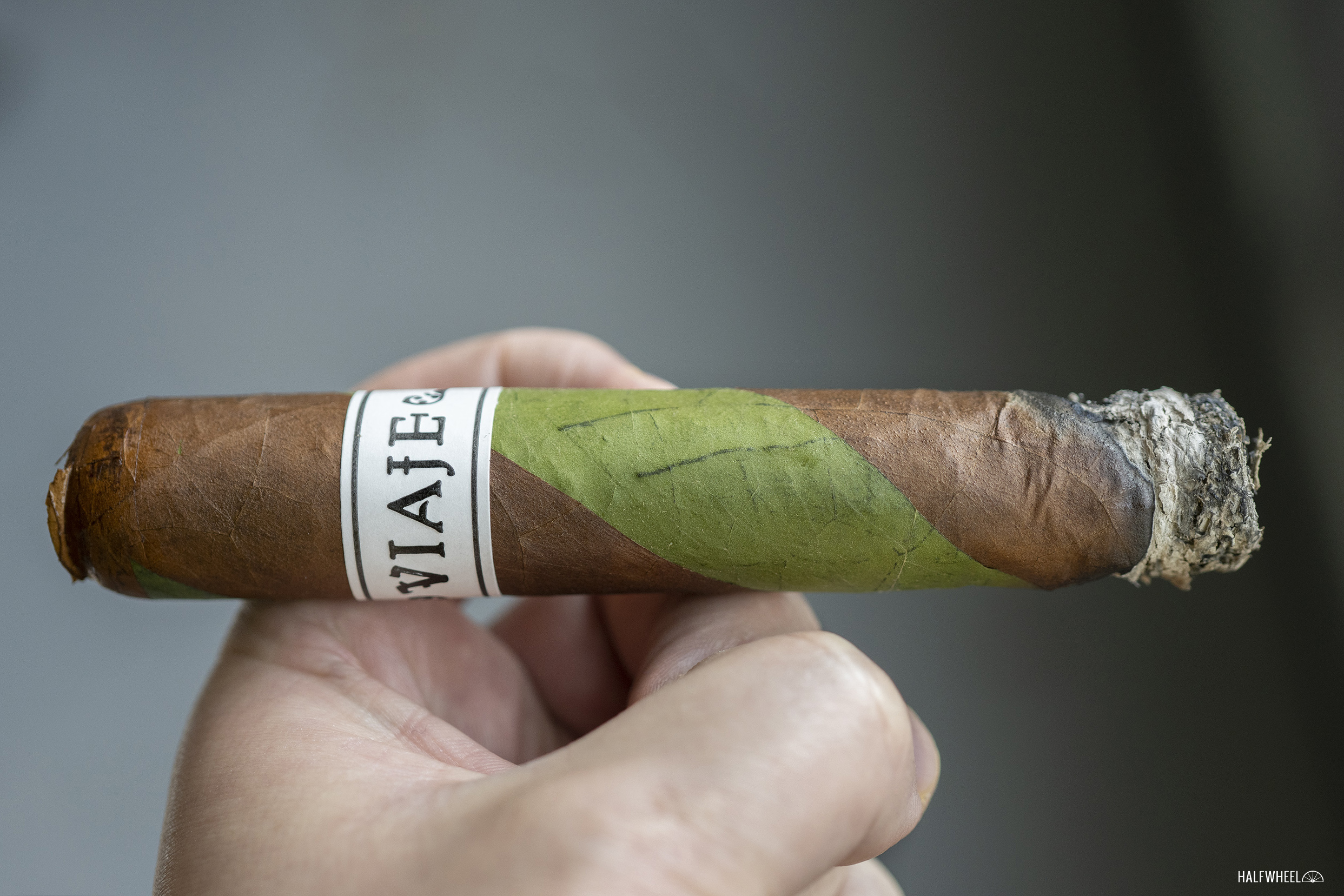 Viaje is one of the most unique cigar companies in business today. Rather than selling a core line of cigars, the company ships out batches of limited edition cigars. Within that, there are a variety of core lines—ones that are typically released in some capacity every year—though even that has its exceptions.

Typically, Viaje ships one batch of cigars each month. Sometimes, it’s just a variety of cigars branded as being part of a single line, other times it’s cigars that represent multiple lines. While Viaje oftentimes doesn’t disclose certain pieces of information—the company rarely will answer questions these days about the number of cigars that are being released as part of each batch—every once in a while it has a bit of a surprise.

Last month, Brooks Whittington reviewed the Viaje Circa ’45 Reserva Edición Limitada—a cigar Viaje never formally announced as part of the release of the Circa ’45 Reserva line, which it shipped alongside—and now I’m reviewing a cigar that was announced—or not announced—in a similar fashion: the Viaje WLP Banner / The Hulk.

It was included as part of the April 2021 Viaje shipment, which also included two Skull and Bones releases: Frank Castle and The Punisher. Unlike those cigars, which Viaje put up on its social media, the WLP Banner / The Hulk didn’t and instead became known about once Viaje informed retailers it was shipping cigars.

On invoices, the cigar is listed as a 5.25 x 58 vitola packaged in bundles of 25 with an MSRP of $340 per bundle. A Viaje spokesperson declined to answer questions about this cigar, so none of the other details are known.

This is neither the first time Viaje has used the Banner nor the Hulk names. Both—references to the comic book character Bruce Banner who transforms into Hulk—have been used for Skull and Bones releases.

This cigar has a barber pole design, meaning it has two distinct wrappers that create a look similar to a classic barber’s pole sign. One of those wrappers is the green leaf known as candela, and while Hulk is known for his green color, Viaje has—to this point—not used a candela wrapper for a Hulk-named cigar.

This release is part of Viaje’s White Label Project (WLP) Series, which has encompassed a variety of cigars over the years that aren’t really related to one another except for the black text on white band they all share.

Here’s the cigar compared to the other Bruce Banner and Hulk-themed cigars. 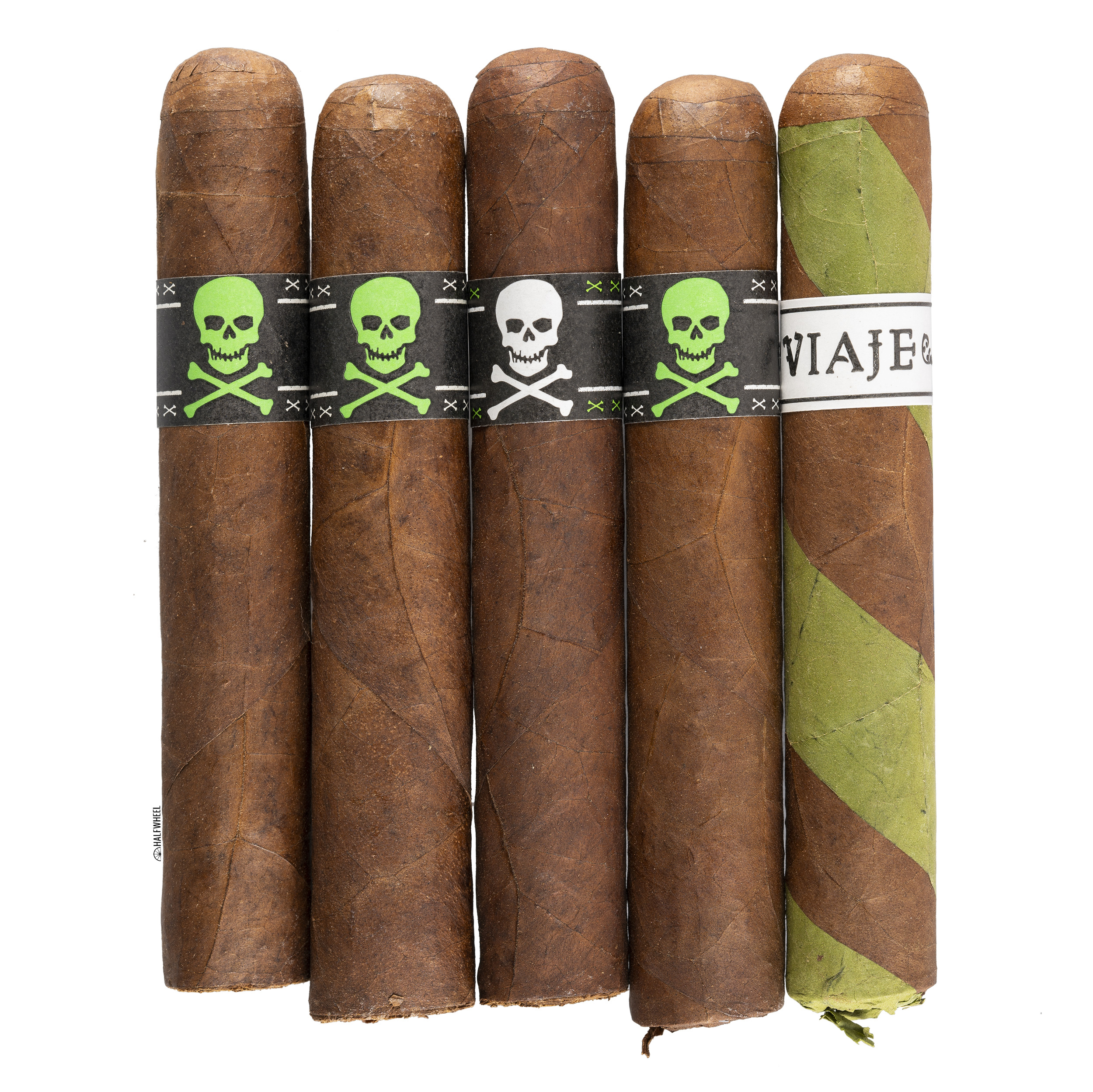 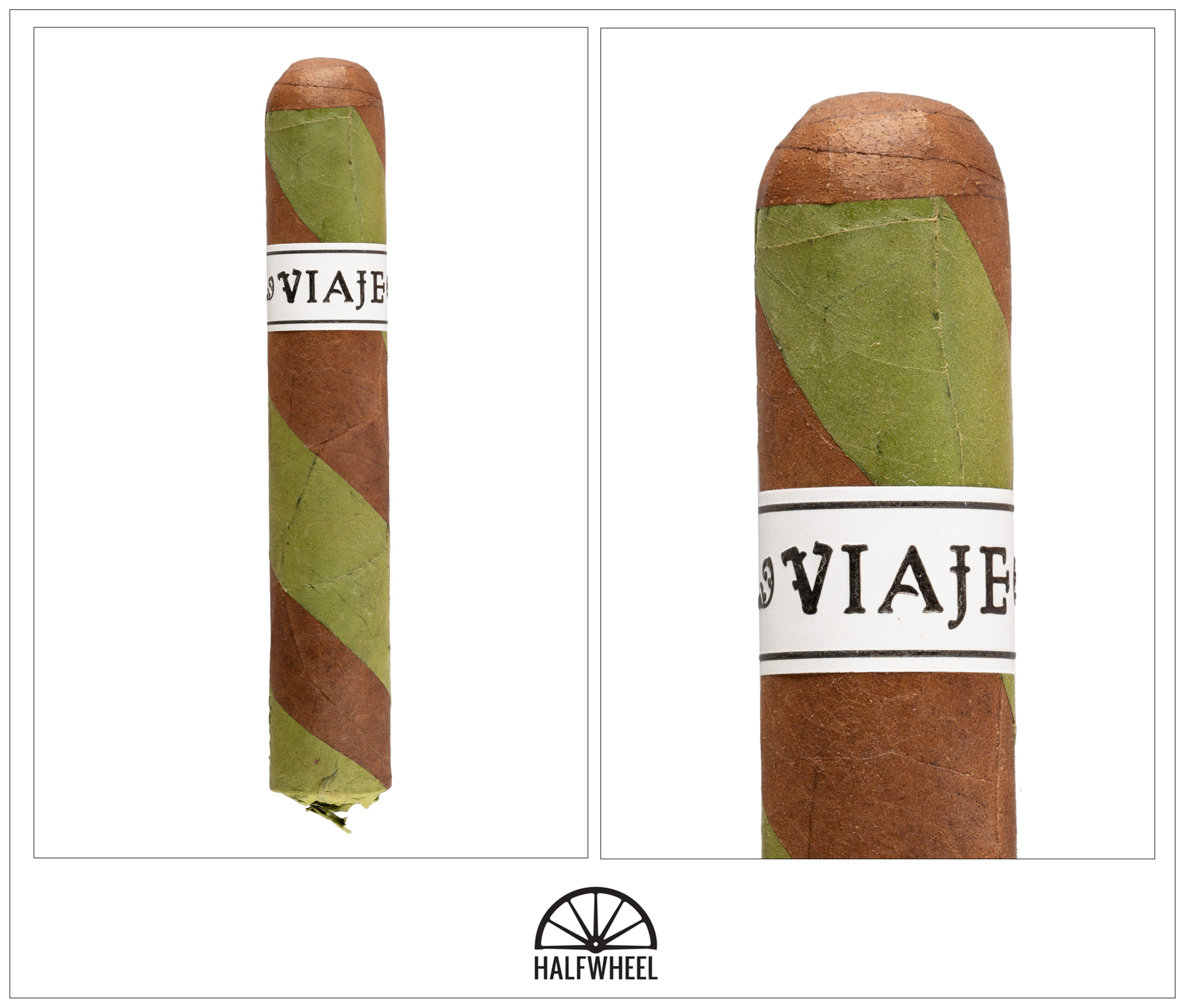 I’m not sure if it’s just my slow normalization to larger ring gauge cigars or if it’s the use of two wrappers, but this cigar is deceivingly large. Once out of cellophane, the Banner / The Hulk seems a lot thicker than it did previously. The candela used here is a deeper shade of green compared to some other candelas, and it contrasts the brown wrapper rather well, something that is no doubt helped by the reds that the darker wrapper has. As I smell the two wrappers, I don’t pick up many of the classic signs of candela, but I do notice that the candela’s aroma seems to be more potent than that of the non-candela leaf. There’s lots of leather from both colors of wrappers, though when I smell the candela portion I get something that reminds me of dry pasta. Smelling the candela-covered foot is pretty unpleasant thanks to lots of manure notes along with some ginger and leather. The cold draw is a bit more intense than the aroma—around medium-full—with flavors of waffle cone, coffee, a fruity sweetness and some honey. It’s not as sweet as it sounds, and the more forcefully I draw, the earthier the cold draw gets.

Given the covered foot, I spend extra time making sure the cigar is lit. Even then, there’s not as much smoke as at the start of a typical cigar. Some of the classic vegetal candela flavors shine through, though there’s also some generic earthiness, sourness and a bit of pepper. Fortunately, the smoke picks up pretty quickly, though I do think the draw is slightly loose. The flavor profile has earthiness, hay and lots of a Ritz cracker-like flavor. It finishes with earthiness over creaminess and some corn tortilla chips. Retrohales have even more of the Ritz cracker flavor over grassiness and leather; it’s crisper and a bit more roasted than the main flavor, an they finish with Ritz crackers, creaminess and a hint of a tingling sensation, but no real pepper. The net result leaves me with a feeling like I just had some bourbon and Ritz crackers. Flavor is full, body is medium-full and strength is medium-full. While it’s not the prettiest ash or the best draw, construction is fine in the first third. The real highlight is the smoke production, which has reached tremendous levels.

The Ritz cracker flavor intensifies even more in the second third of the Viaje WLP Banner / The Hulk. There’s still earthiness, now joined by some bread, a generic white wine flavor, cinnamon and hints of black pepper. I still am not really sure what’s causing all of the pepper-like spicinesses as sometimes it seems like it’s more of a spice mixture than pepper. The main flavor finishes with white bread over earthiness, some black pepper, toastiness and lesser flavors of saltiness and vegetal notes. Retrohales have Ritz cracker—though a lot less than before—over damp earthiness, a generic woodiness, cinnamon and some beef jerky. They finish with a familiar Ritz cracker and earthiness—though it’s now a more refined terroir flavor—over some roasted corn and toastiness. There’s a deep white pepper flavor, both more defined and much longer-lasting than before. Flavor is full, body is medium-full and strength is somewhere between medium-full and full depending on the cigar. The burn is a bit uneven and I need to make a touch-up on each cigar, though smoke production remains very impressive. 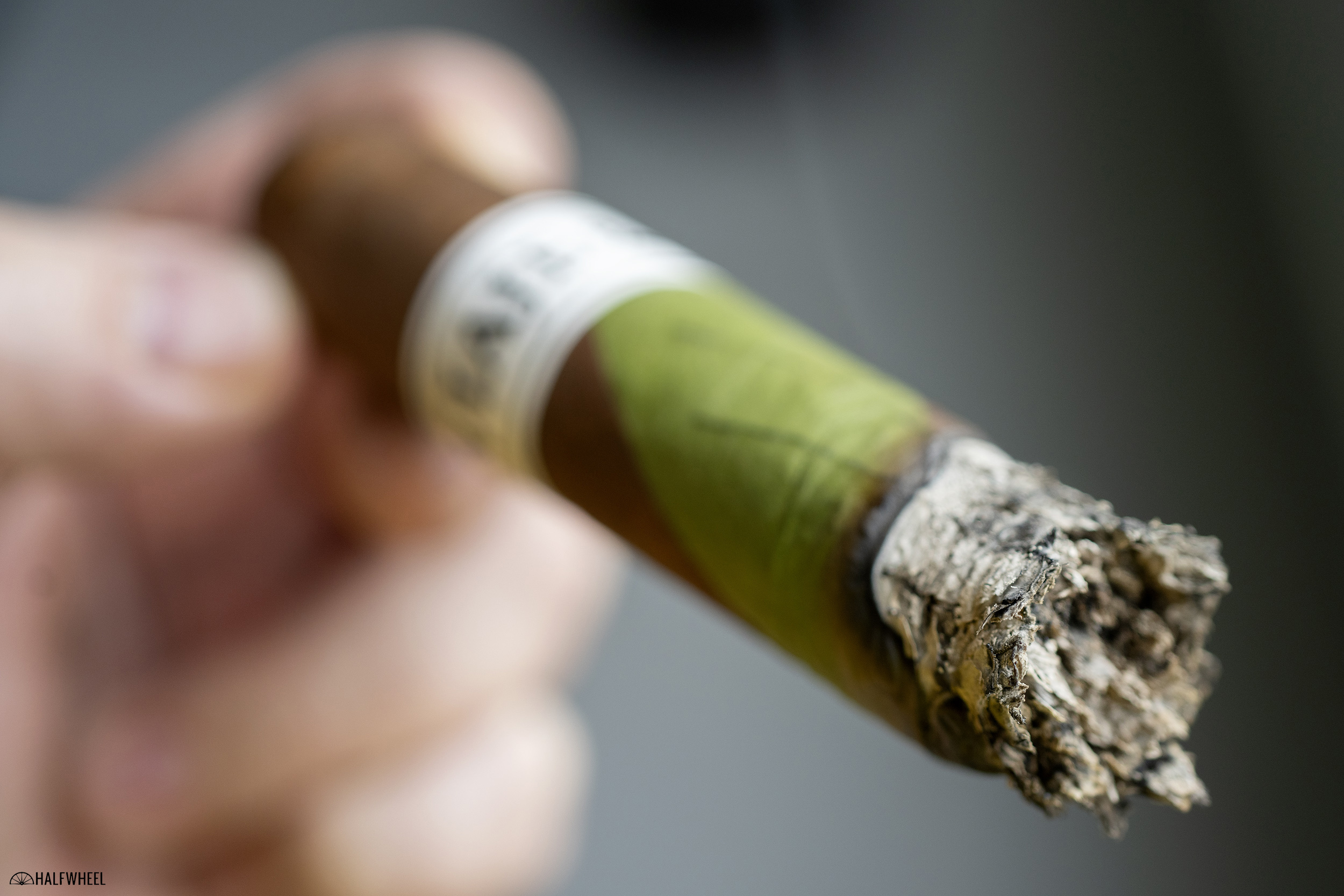 While it might be tough to tell the differences between the first and second thirds, there’s no question about how different the final third is. The main flavor has shifted to roasted corn, corn tortilla chips, earthiness and creaminess. It finishes with lots of creaminess joined by minerals, black pepper and some lemon zest. Retrohales have Ritz crackers over creaminess and earthiness. Surprisingly, I don’t get any of the Ritz cracker flavor on the finish, instead, it’s earthiness, apples, sourness and leather. Flavor is full, body is medium-full and strength is full. On two cigars, construction is more or less the same, but one cigar needs a bit more help from the lighter to get through the final third. 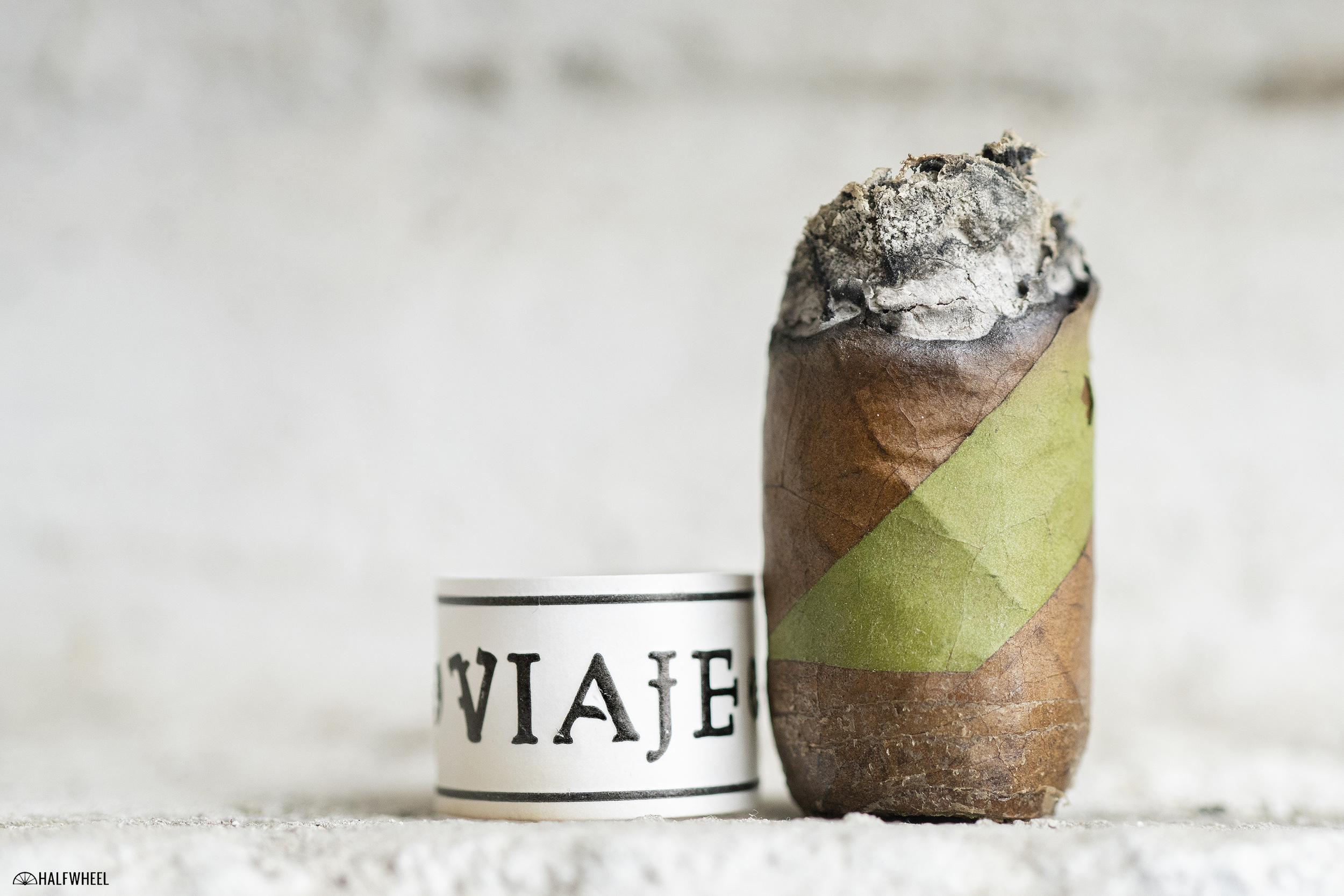 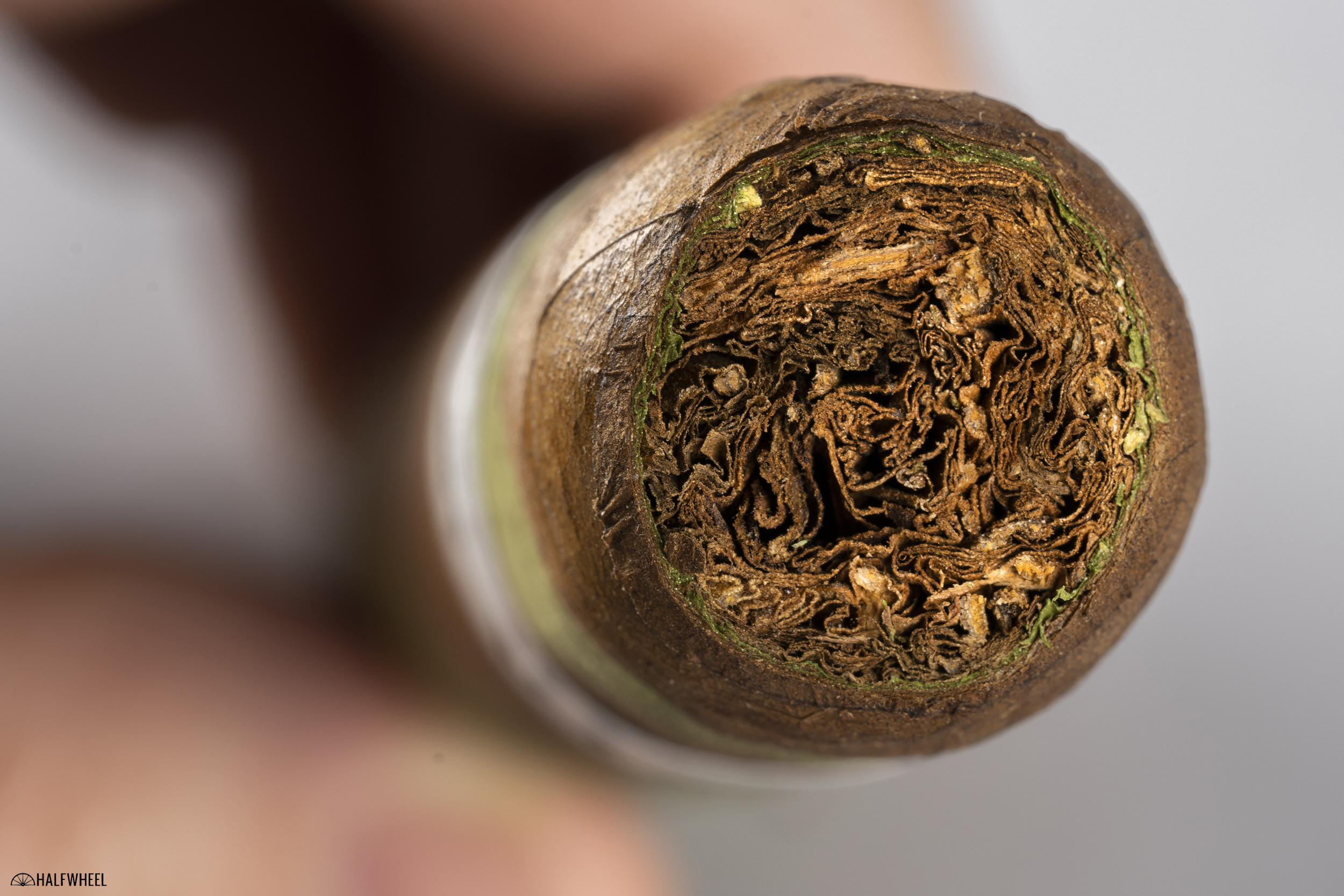 While I don’t want to dismiss all candela as a gimmick—it is widely believed to have once been the most popular wrapper option sold in the U.S.—it’s not for everyone. Our scores of candela cigars over the years make the point painfully clear. Even when it’s paired with other wrappers, it seems to either not show itself enough and just degrades the other wrapper’s flavor, or it’s too overwhelming. Obviously, I don’t know what this cigar would have tasted without the barber pole treatment, but I think the Viaje WLP Banner / The Hulk is a Goldilocks scenario. I can taste bits and pieces of the candela’s influence, but not an overwhelming amount. The cigar isn’t without its minor issues, but if you told me to pick a cigar with at least some candela wrapper out of our humidor, this would be a very strong candidate.