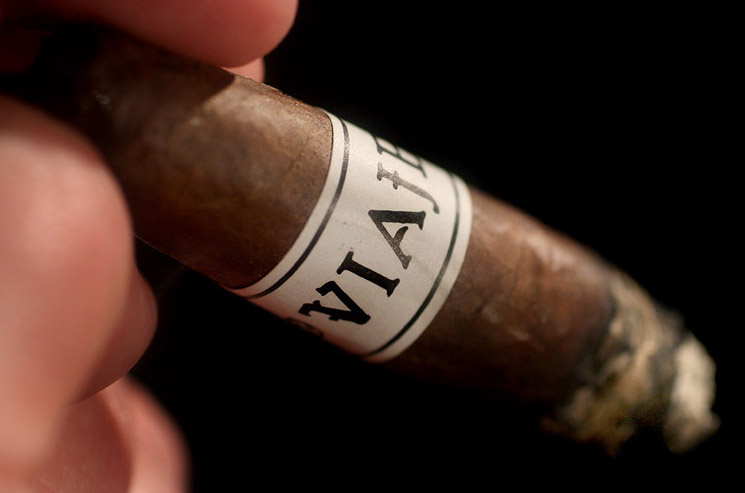 In early February of 2012, Viaje announced that the first White Label Project of 2012 would be shipping with the Super Shot 10 Gauge and the Friends and Family. Dubbed the “Winter Classic,”, it is a 4 1/2 x 48 Rothschild that is an entirely new blend, and comes in bundles of 25.

This is how Andre Farkas, owner of Viaje Cigars describes the idea behind the White Label Project series:

And here is what Andre says specifically about the Viaje WLP Winter Classic release:

Really happy with the way these turned out. I blended WC with the colder states in mind. I wanted something on the smaller side that delivered flavor without being overpowering. These are medium plus.

Winter Classic is the fifth White Label Project release and the first of 2012. The current line-up looks like this (top to bottom, in order of release): Like all of the other WLP releases before it, the Viaje WLP Winter Classic is being sold in newspaper wrapped bundles of 25 cigars, which look like this: The WLP Winter Classic is smaller cigar, especially when compared to its earlier WLP counterparts. It has a nice, even looking dark espresso brown wrapper which is smooth as silk when you run your finger up and down it. The wrapper smells strongly of barnyard, coffee, mocha and leather. Unfortunately, the Rothschild is hard as a rock when squeezed.

The first third of the Viaje WLP Winter Classic starts off a little harsh along with a strong leather note. The harshness dies down after about ten puffs and I am left with some fairly nice creamy oak thrown into the mix. Other flavors of earth and a tiny amount of chocolate round out the first third. There’s very little spice, but there is some black pepper noticeable, especially on the retrohale. The strength is already starting to build, but by the end of the first third, it is a solid medium. Coming into the second third of the WLP, and the strength is definitely building. The Viaje’s profile remains a combination of creamy and earthy, but the harshness from the first third seems to be making another appearance, albeit not nearly as strong. I am tasting a bit more leather and perhaps a very slight floral note, but not much other than that. The burn and draw are both great, but right at the start of the second third I pulled out a stem that was the size of at least 10% of the total cigar. Interestingly, the draw was unaffected by the removal of the stem, so I continued on. The strength ends the second third at a strong medium, but is still climbing. The final third of the Winter Classic is easily the best in terms of profile with the flavors melding together in a way that was not present in the former two thirds. While most of the flavors were basically the same, I am getting a bit of sweetness in the background that is new, as well as a nice mocha note that comes and goes. The construction continues to be wonderful and the strength ends on the full side of medium. I was easily able to nub this cigar, which is good, since it is so short and it did not get hot at the end.

The Bottom Line: When the WLP Winter Classic started out harsh, I was thinking I was in for another typical mediocre WLP release. But the harshness died down quickly and I was left with a cigar that had decent flavors and full, but not overwhelming strength. The construction was great, despite the stem I pulled out of one of my samples, and there was plenty of billowy smoke to be had. Honestly, I feel it is still a bit expensive for the size, I would like to see it around $6.50 instead of $8.00, but it is a Viaje, after all. This is easily the best  WLP release for me out of the box, but that is really not saying much, and as a whole, the Viaje WLP Winter Classic does not even crack the Top 20 of the best cigars that Farkas as released. It was a good stick, and I will pick up a few more to see how they age, but there are many good sticks out there for less money, and are easier to find.