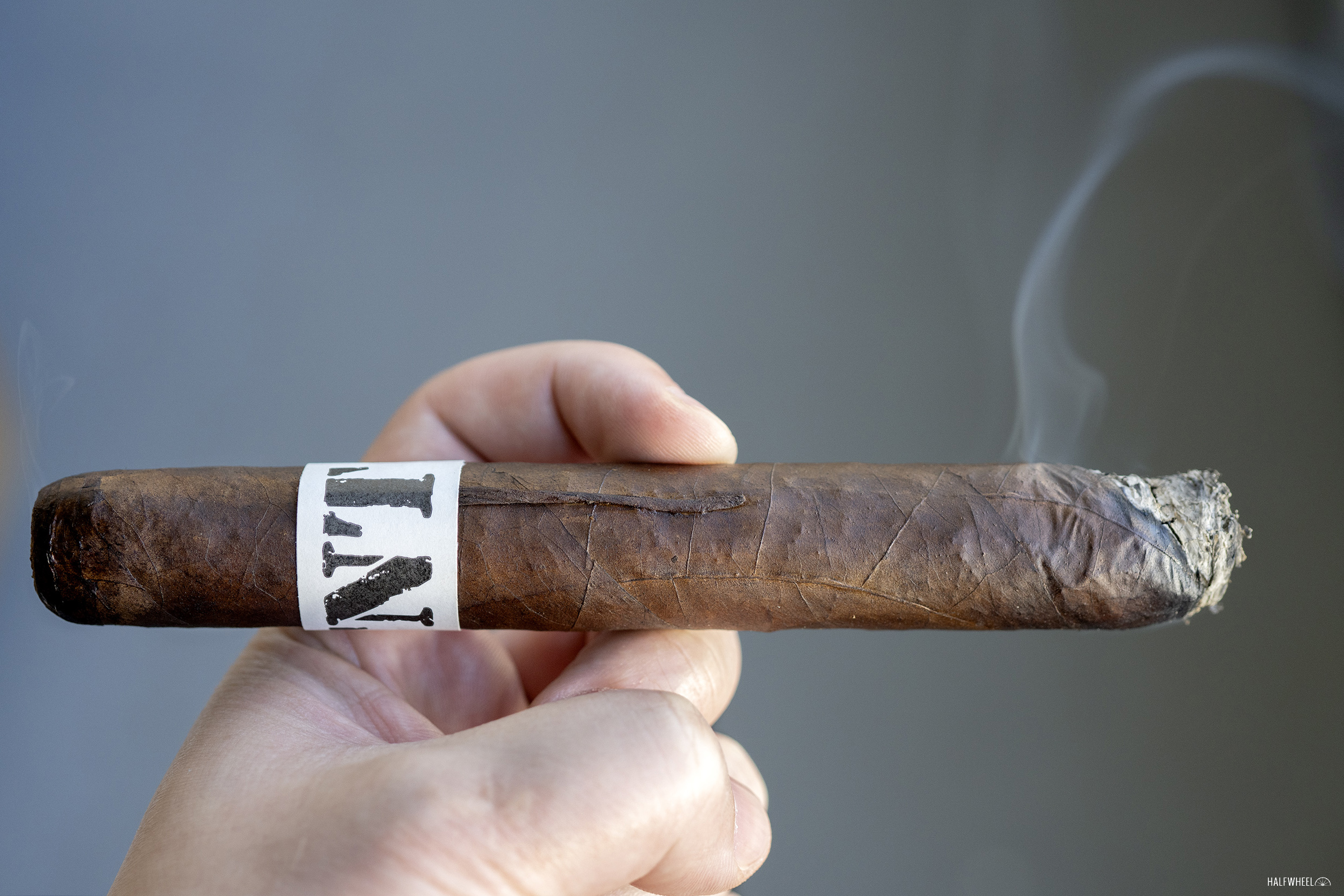 There are few cigar companies that have an archive of past releases as large as Viaje, something that’s pretty remarkable considering the company has been around for less than two decades. As such, it is always interesting to see which Viaje releases will be released in a given year—as there are few if any constants—and what new wrinkle the company might have in store. Then there’s the question of how much information we might get about said new wrinkle.

In the case of this year’s Viaje TNT, we do know one new wrinkle: it’s a different size. Since its debut in 2010, the Viaje TNT has been a 6 1/4 x 54 toro extra that has a covered foot and an extra-long pigtail, seemingly to mimic a stick of dynamite. This year, the cigar is a 6 1/2 x 56 size with the same covered foot and extra long pigtail.

Beyond that, little is known. It has an MSRP of $1,034 per box of 75, approximately $13.79 per cigar. The TNT uses the same packaging as previous releases: crates of 75 and cigars featuring white bands with “TNT” printed on them.

As for what the blend is, where it’s made, or how limited the cigar is—none of that was disclosed by the company.

Originally, the TNT was made at Raíces Cubanas in Honduras using Nicaraguan tobaccos. In 2015 and 2016, it was made at PDR Cigars using a Connecticut broadleaf wrapper over Dominican tobaccos, though when it returned in 2019, the company said it was a “Nicaraguan puro” made in Estelí, Nicaragua.

Based on the articles we’ve written, this appears to be the eighth release for the Viaje TNT. 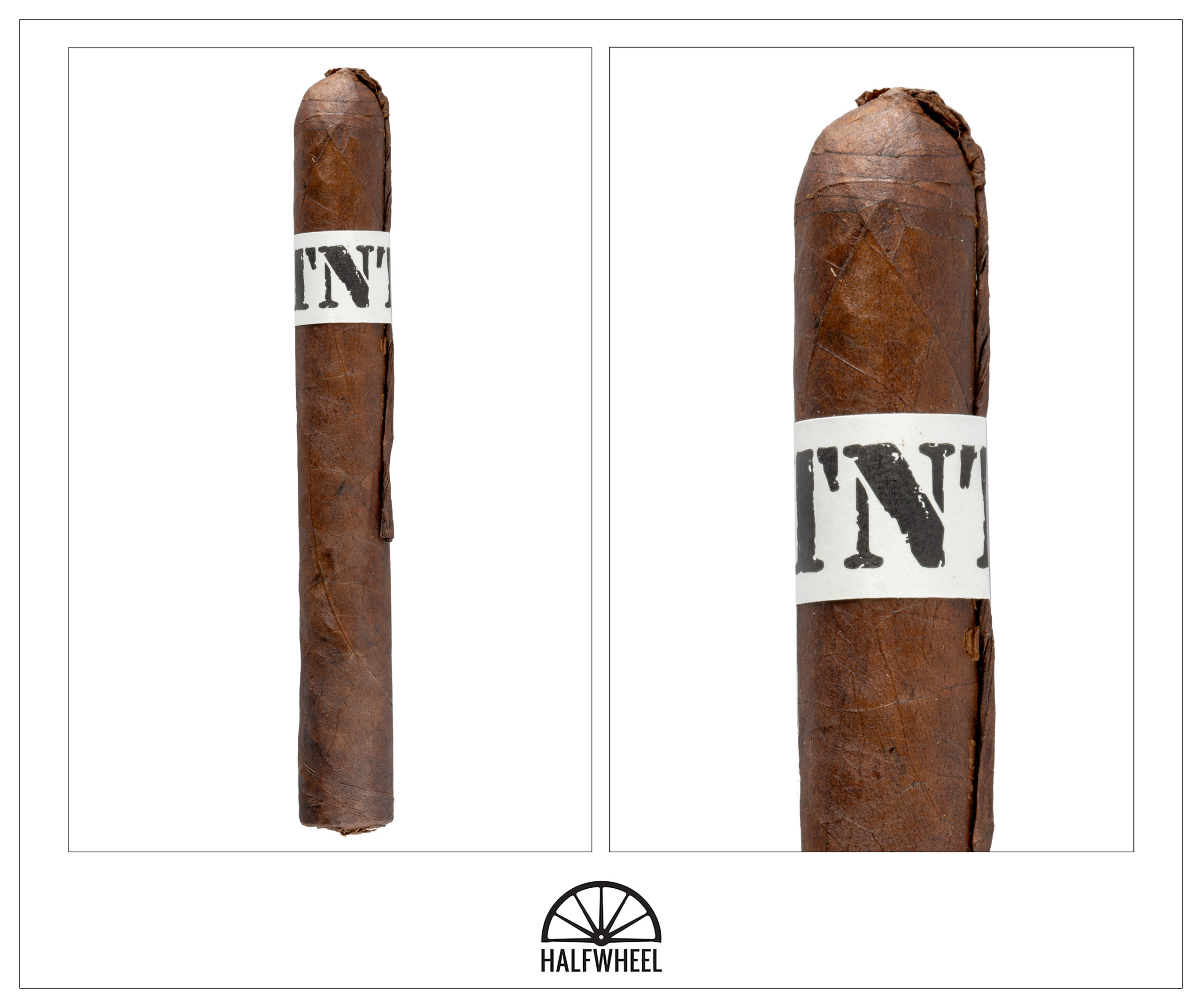 This is a very dark brown wrapper that reminds me of the color of freshly rained on mud. There’s a decent bit of reds and a lot of oil, but also some black spots that discolor the wrapper. The aroma from the wrapper is medium-plus, with a lot of barnyard aromas and something that smells like an unripe tomato, which is a bit ironic given it’s currently tomato season. One sample has a more robust tomato-like scent, which reminds me of making this specific recipe of tomato sauce. The covered foot isn’t as robust as the wrapper, though it’s a lot sweeter thanks to added chocolate and orange flavors. I’m not really sure what to do with the exaggerated pigtail on the Viaje TNT, so I do what I normally would do: I cut the cap off. That means the pigtail is now just a strand of tobacco that starts at the top of the band and runs down a bit, as the top half of the pigtail—the part between the band and the actual cap—gets removed by me as it’s otherwise awkwardly peeling away from the wrapper. Flavor-wise, cold draws have sweet chocolate ice cream over some spoiled blueberry flavors, earthiness and a touch of white pepper. Of note, the draw is a bit open on each cigar.

After a pretty lengthy process of lighting the cigar—because I wanted to make sure the covered foot was fully ignited—I find a velvety texture to the smoke delivering flavors of leather, a damp earthiness and some underlying dark fruity flavors. In some ways, it reminds me like an after-dinner drink thanks to the depths of the earthiness and that touch of sweetness. Unfortunately, the sweetness dissipates as the cigar burns, though leather and earthiness remain the two main flavors of the Viaje TNT. While a bit weaker than the leather flavor, the star of the show is the layers of earthiness. Underneath, I pick up bread crust, a mild amount of toastiness and some black pepper. It finishes with layers of earthiness over saltiness, cedar, some roasted flavors, a familiar rich fruitiness and some black pepper. Retrohales have bread and straw slightly edging out the earthiness. Behind that trio is something that reminds me of white rice and jalapeño pepper. The sweetness is completely absent in the retrohale, which seems to allow the earthiness to shine a bit more for whatever reason. The finish has French bread, straw, some creaminess and a declining amount of pepper. Flavor is full, body is medium-plus and strength is medium-plus. Each cigar needs touch-ups to help with the smoke production, which just isn’t where I’d like it to be even if the burn line is very even. I don’t think the slightly open draw is helping that particular matter.

Around the halfway mark, bread flavors begin to increase pretty dramatically and eventually meet the earthiness in terms of intensity. While the earthiness is still quite complex thanks to its various layers, it’s noticeably toastier than before. Underneath that, the fruitiness is gone, though creaminess has been added, and the smoke gains the velvety texture it had during the initial puffs. While it’s not as complex as before, each of the individual flavors remaining are much cleaner. The finish has peanuts, leather, a familiar terroir flavor, cinnamon, pepper and some sourness. Retrohales have gritty earth joining the slightly cleaner earthy flavor from the other parts of the profile. There’s not as much pepper before, though my lips feel plenty of a cinnamon-like tingle. The Viaje TNT’s retrohales finish with lots of earthiness in front of straw, red pepper, cinnamon and some underlying, yet mild sweetness. Flavor is full, body is medium-full and strength is medium-plus to medium-full. Touch-ups are needed to help keep the cigar burning, though once again, the ash is remarkably even. 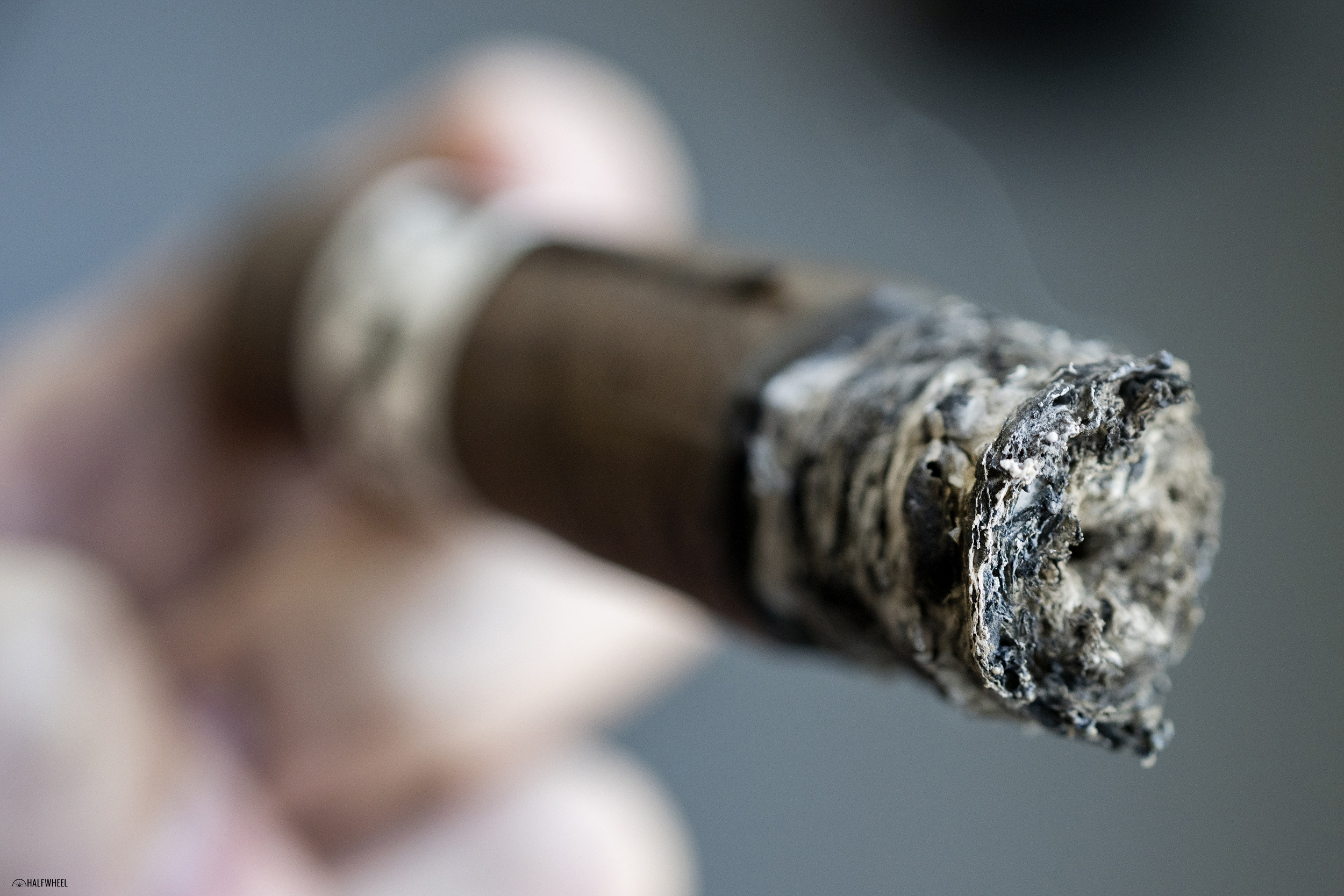 The Viaje TNT continues to be an earthy cigar, now joined by walnuts, creaminess, cinnamon, black pepper and some of the French bread flavor. The finish sees the cinnamon pick up, which overtakes the earthiness, though there’s some creaminess and some sweetness that helps to counteract it. Retrohales have earthiness and cinnamon joined by oranges, blueberry and some green pepper. The finish has earthiness, meatiness, green pepper, cinnamon and some sugar underneath. Flavor is full, body is medium-full and strength is medium-full. While I still need to make a touch-up to each cigar, my issues with keeping the cigar lit are reduced a bit compared to the previous two thirds. 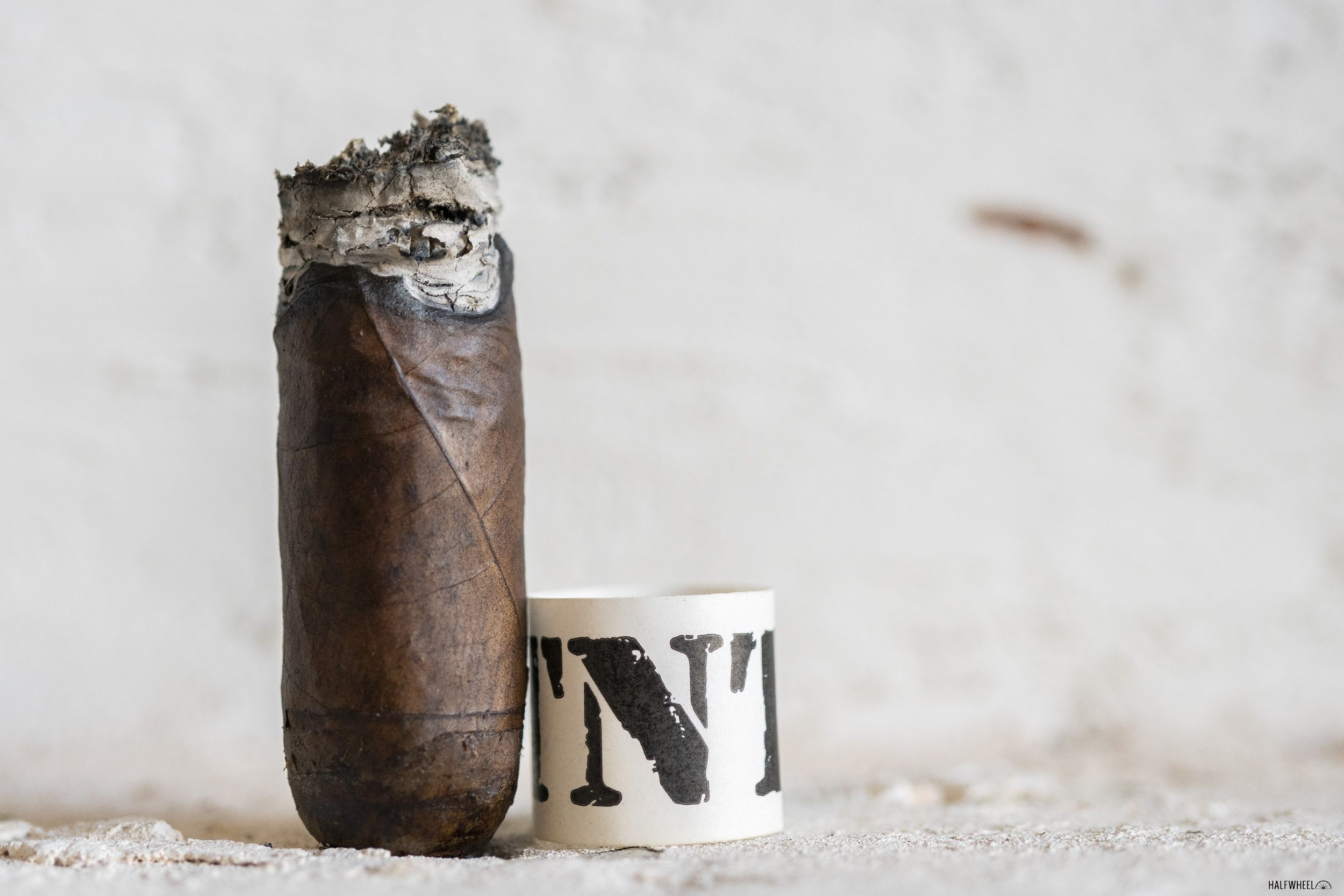 I don’t remember the last time I smoked a Viaje TNT, it quite possibly could have been a decade ago. I’ve never thought of it as one of Viaje’s more complex or desirable offerings, but this version was exactly that. Not only is it a flavorful and complex cigar, albeit with some burn issues, it’s noticeably different than most of the core Viaje flavor profiles. Given the lack of information about what this cigar is made of or where it was rolled, I’m not sure if we are going to see more of this going forward, but I would certainly appreciate it.