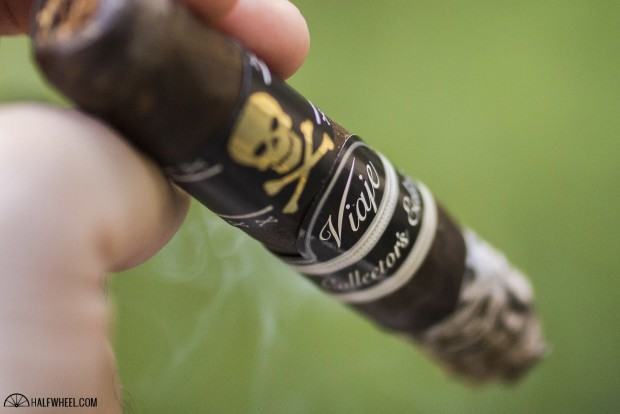 After sensing that his usual practice of shipping cigars to stores in the days surrounding the annual IPCPR Convention & Trade Show might be costing him face time with retailers, Andre Farkas decided to change things up for 2015 and release a variety of cigars at the 2015 IPCPR Convention & Trade Show, including a new limited edition at the show, the Skull and Bones Ten Ton Tess.

Of course, it wouldn’t be a Viaje release if there wasn’t a bit of secrecy and intrigue with the release. The Skull and Bones Ten Ton Tess is being released in ceramic jars that come in three presentations with two—the black on white and white on black–holding one blend of the 6 x 54 cigar, a Mexican San Andrés wrapper, Dominican binder and fillers from Brazil, the Dominican Republic and the United States. There is 500 of each of those jars are being produced, with the cigars priced at $14.47 each.

The other version, a black jar with gold skulls and crossbones, gets only 100 units and the blend isn’t being disclosed, nor is an MSRP being set. The only thing that is confirmed as remaining the same is the size, the use of the Collector’s Edition band and the general look of the jar. 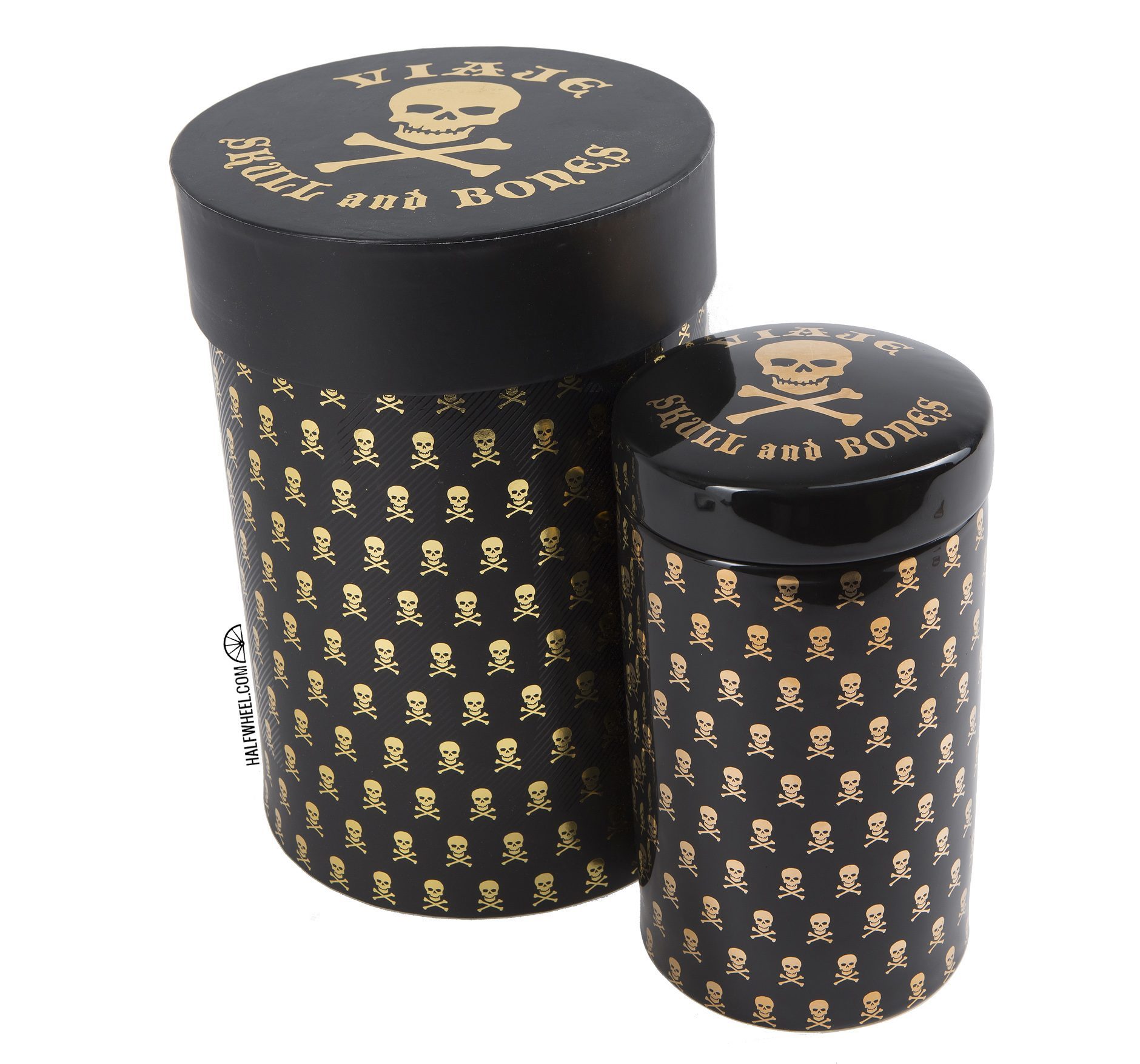 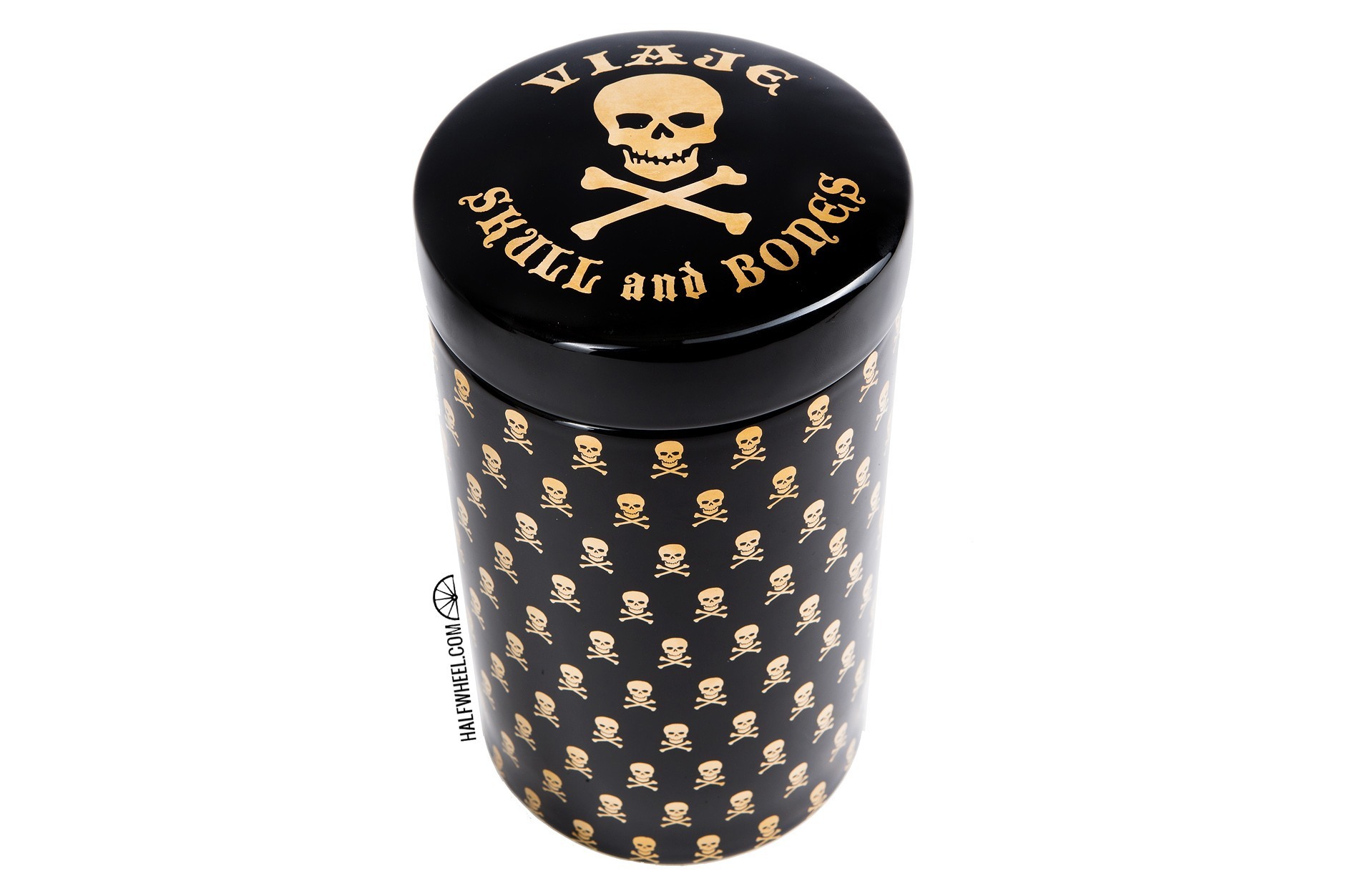 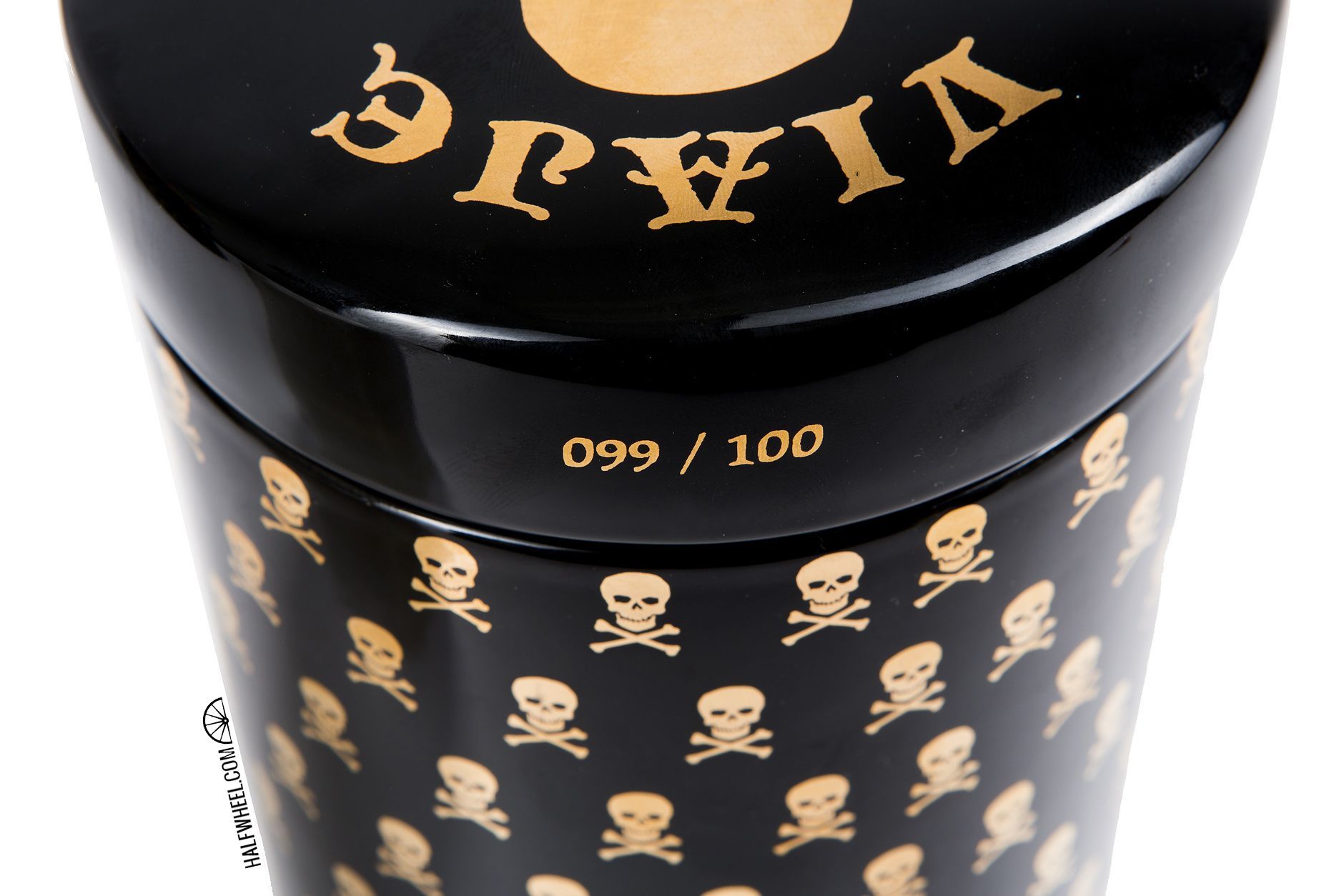 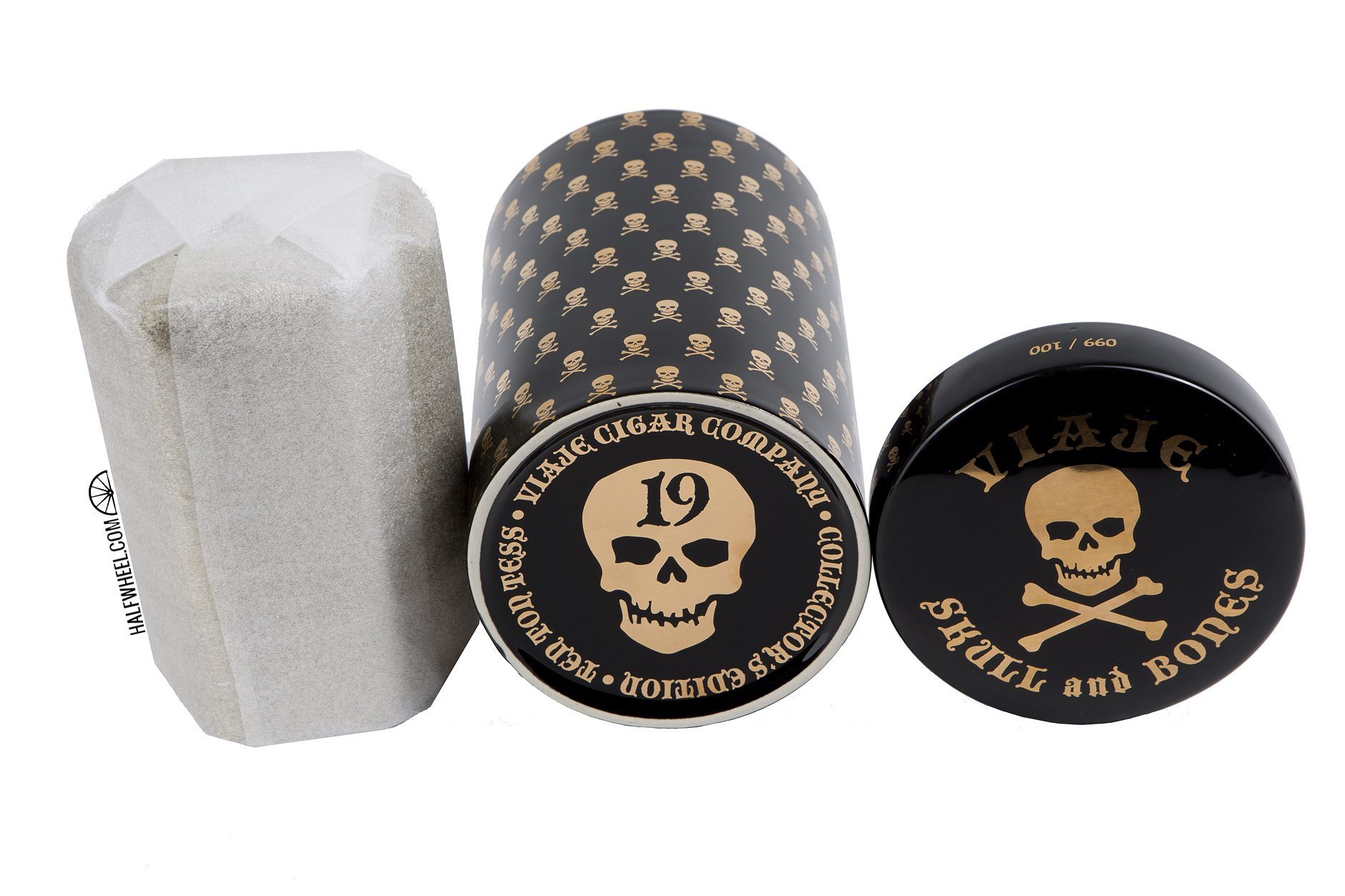 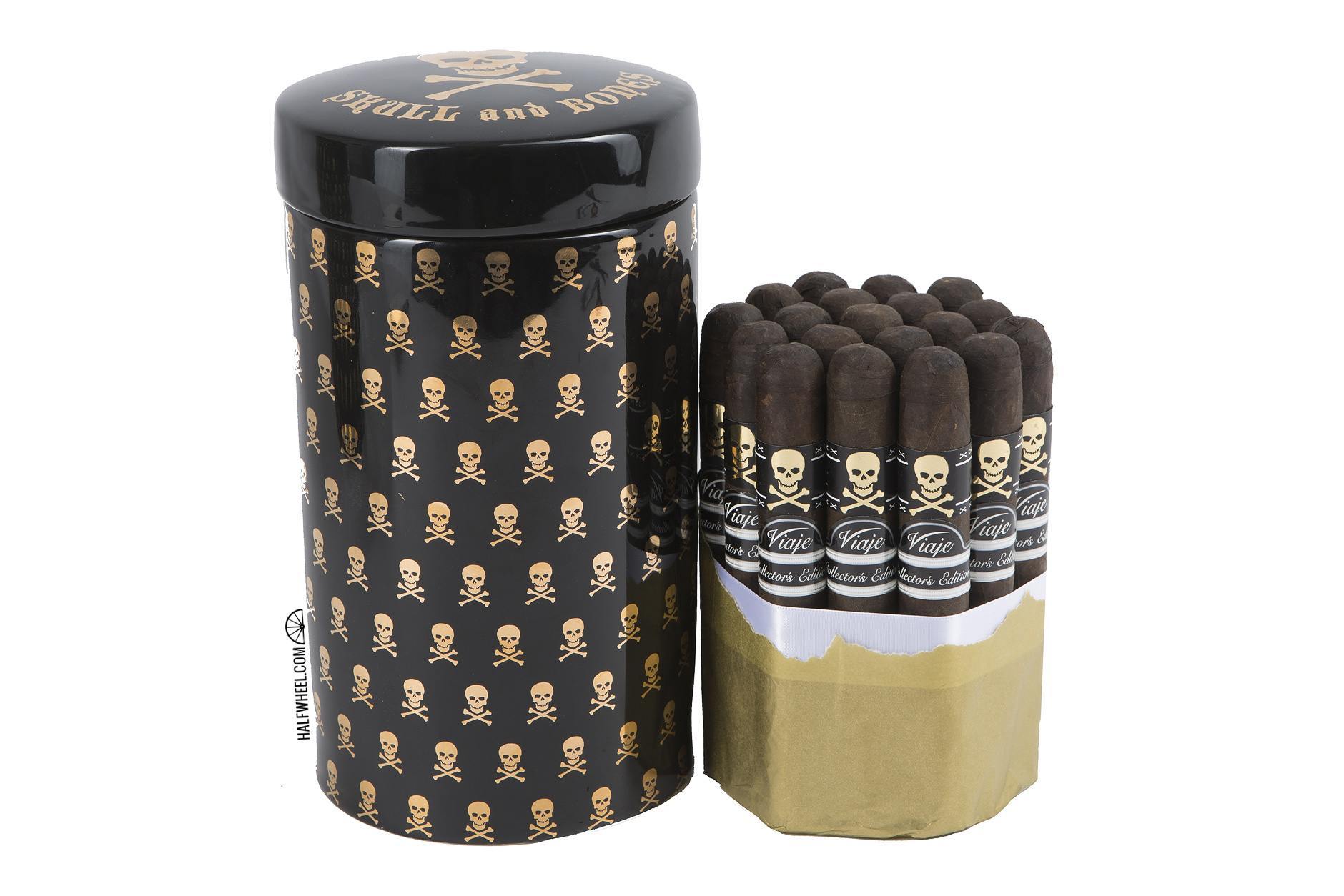 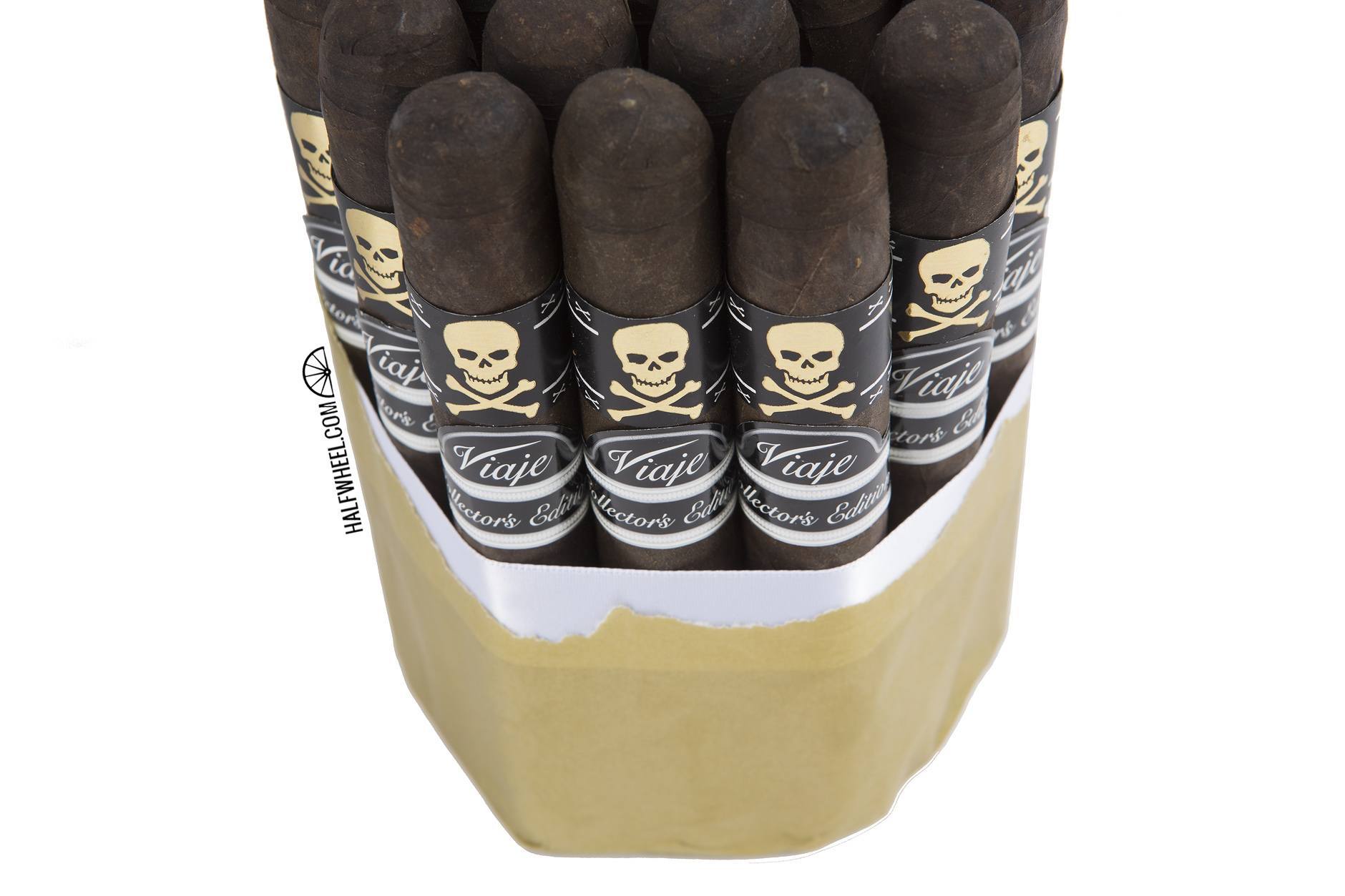 These two new additions become the 24th and 25th members of the Skull and Bones family, which dates back to May 2010 and the Daisy Cutter, and includes both the nuclear and non-nuclear releases with their red and white bands, respectively, the black-banded M?stery line, and two cigars to bear an “Edición Limitada” secondary band in place of the standard “SKULL and BONES” version. 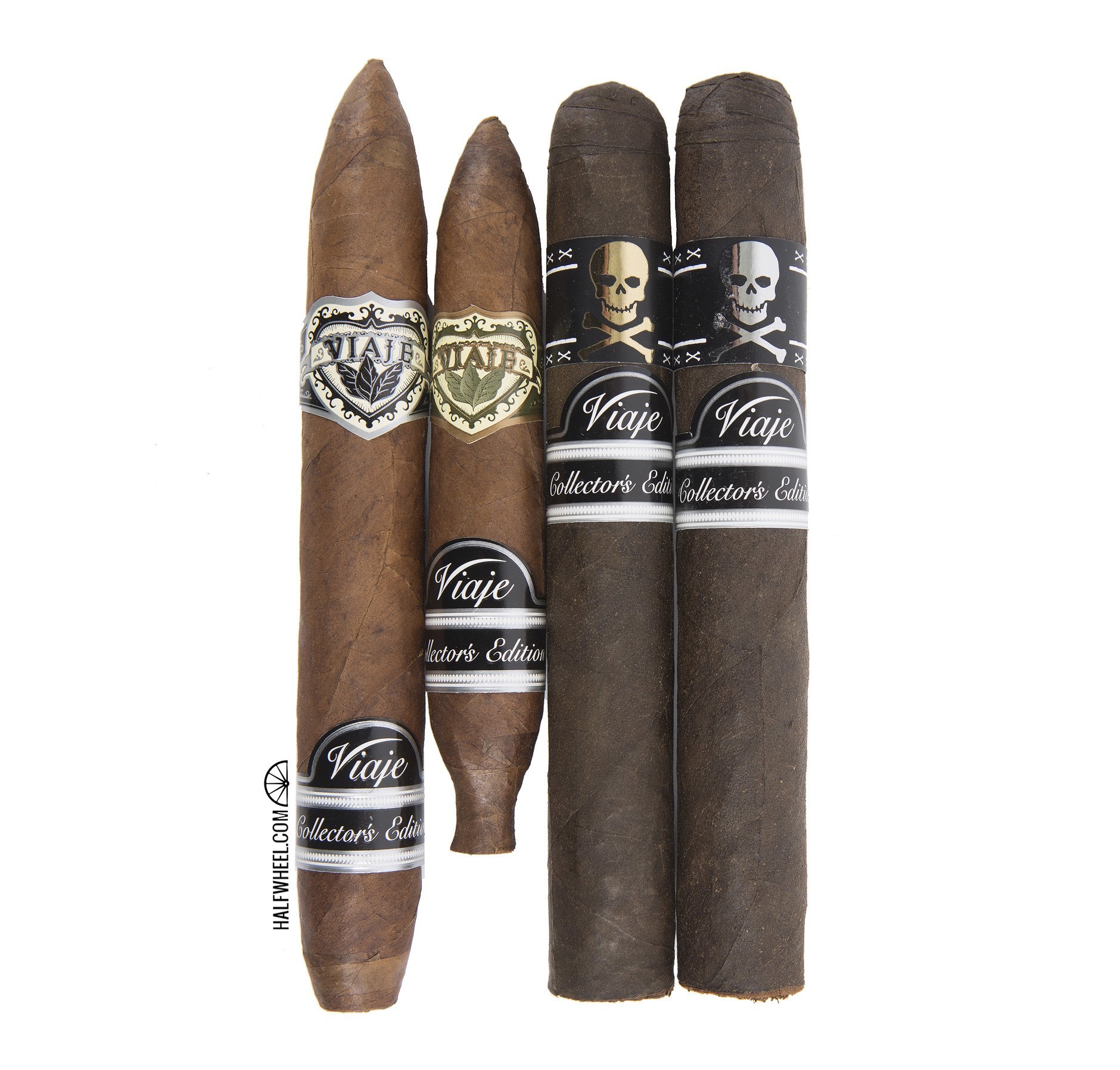 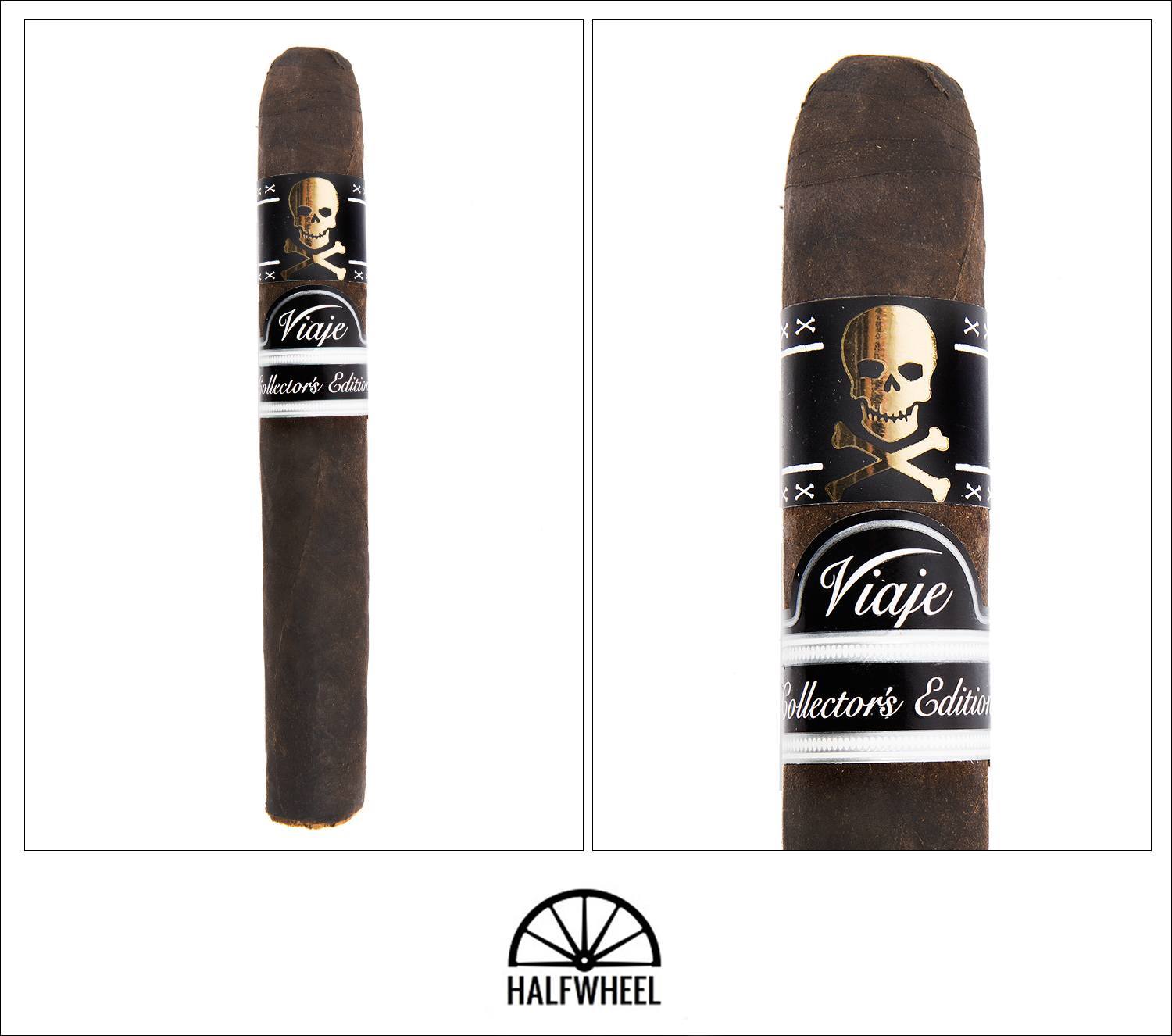 The Viaje Ten Ton Tess is what I think many novice or non-smokers think of when they hear the word cigar: it’s big, dark and almost intimidating if you think a dark wrapper shade automatically equals strength. Depending on the light you’re in, you may not automatically recognize the skull on the cigar as being gold; while it was clear indoors, it appeared more silver when I went outside to smoke it. The Collector’s Edition secondary band would seemingly clue you into the cigar’s status, however, it appears on both versions. It’s a firm cigar from head to toe, draped in a dark brown wrapper with spots of lighter tooth and a typical vein structure. By and large the seam lines are clean and the caps will applied, but the occasional jagged cut or lip on the cap will be visible. From the foot I get a dry and somewhat woody note, but it’s much more complex than that and has me thinking pesto of all things, though more along the lines of pizza crust with pesto on it. There’s a bit of pepper to tease the nostrils as well, and some samples offer a bit of berry sweetness. The cold draw errs to the firm side if anything, and the cigar is a bit hard at its head, with the flavors skewing a bit tangier—almost towards barbecue sauce—with a smoky and peppery undertone.

Stop me if you’ve heard this one before, but Viaje’s Ten Ton Tess starts off fairly full-bodied with a good bit of blunt pepper and tangy earth, an almost unquestionably full bodied profile from the time the lighter touches the foot. The draw is just a bit firm, but not enough to hamper a bit of heavy, syrupy sweetness from creeping through and a bit of bright mint that follows shortly thereafter. For as full-bodied as the cigar is, and even with the occasional rough spot, it’s still fairly balanced, and not as outright of an assault on the palate as some might expect. Retrohales are a bit brighter in the pepper department but aren’t nearly as strong as I had thought. After the fairly quick development of the profile in the first inch, there aren’t many additional changes in first two inches, other than a bit of fine-tuning when it comes to the strength and pepper levels. The burn has been downright flawless through the first third, with a sharp and even burn line, ash that holds on respectably well and a good amount of smoke. 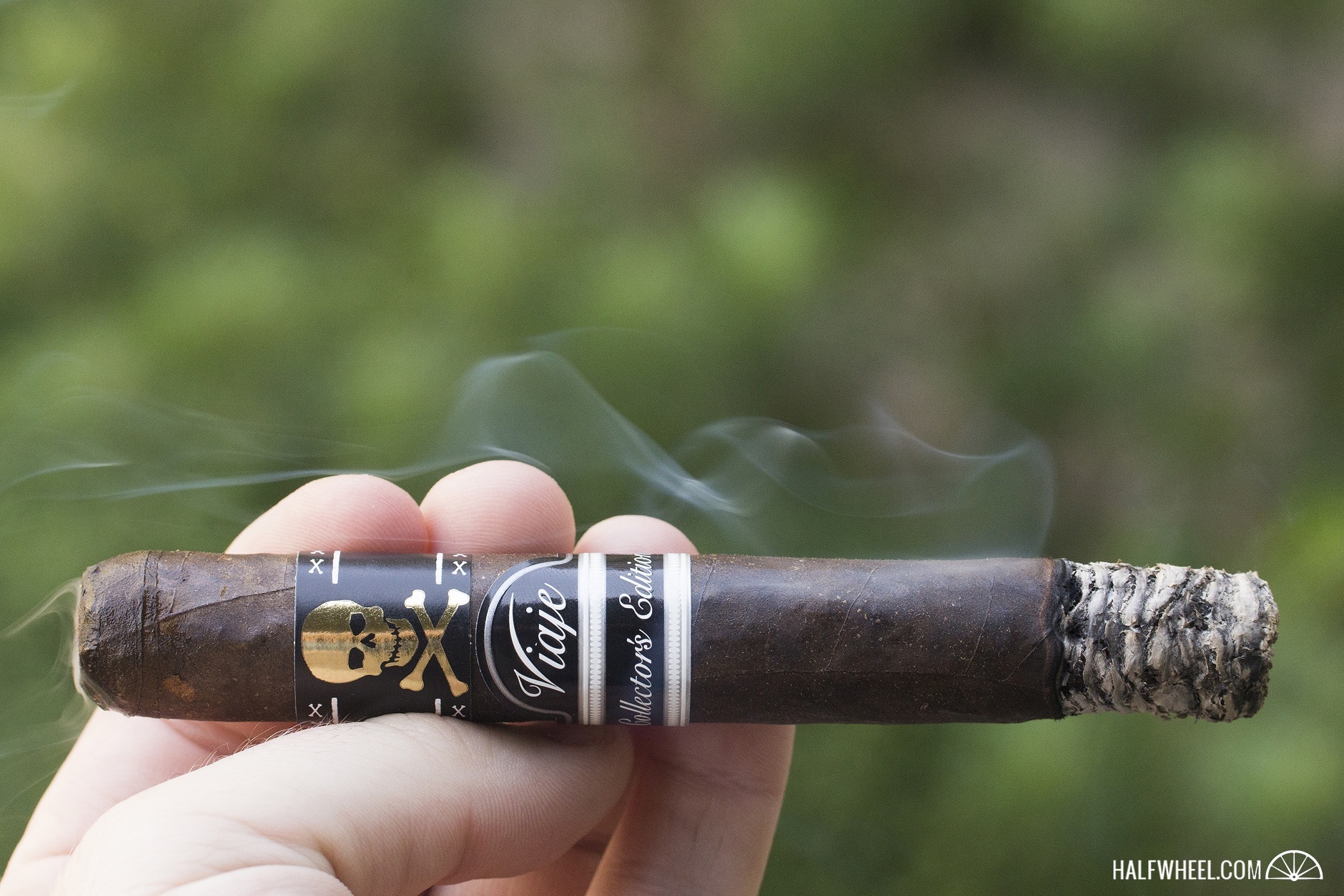 There’s a bit more fragrance coming from the Ten Ton Tess at the start of the second third as I get a touch of cedar in the air while the cigar is at rest. The strength continues to be a solid medium-full while occasionally upping the ante to full-bodied, and in certain samples the cigar shows a rough earthiness that can be a bit much for the palate, but when it keeps that in check is a very enjoyable smoke. It’s here where I find that line that the cigar either will or won’t cross on the way to becoming truly full-bodied, and after three samples it’s much better that the Ten Ton Tess not cross it. At the tail end of the second third I can feel the strength pick up, as the cigar is giving much more of a reaction in the chest than it had earlier, either due to hitting a particularly nicotine-rich spot or the cumulative effect has finally caught up to me. 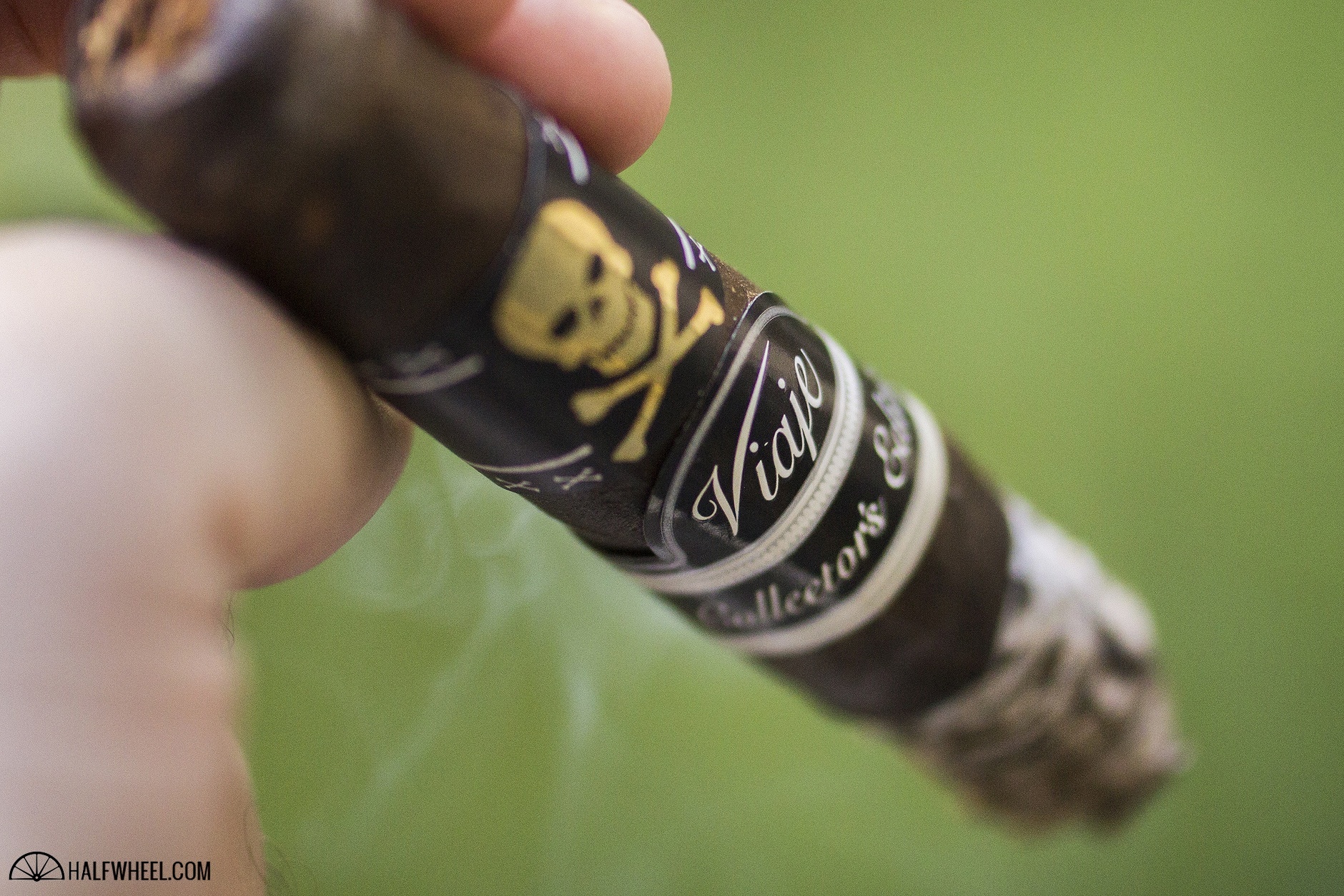 I begin to sense a slow down in the burn rate as the final third commences, as it feels like less of the cigar burns with each puff. The burn line is still sharp and the Ten Ton Tess hasn’t needed a relight, something I’m always glad to say about any cigar. The pepper begins to become much more prominent in the final three inches or so, building up until it finally bursts through and becomes the lead flavor with the bands removed. There’s a touch of red pepper in the mix now, which further accentuates the added punch, and the harshness that was picked up in the second third of one sample continues to be prominent through the conclusion of the cigar. Depending on whether or not that shows up, as well as how hard the cigar is hitting you in terms of nicotine, Ten Ton Tess merits being smoked down to a tidy nub or could warrant being put down a bit prematurely. 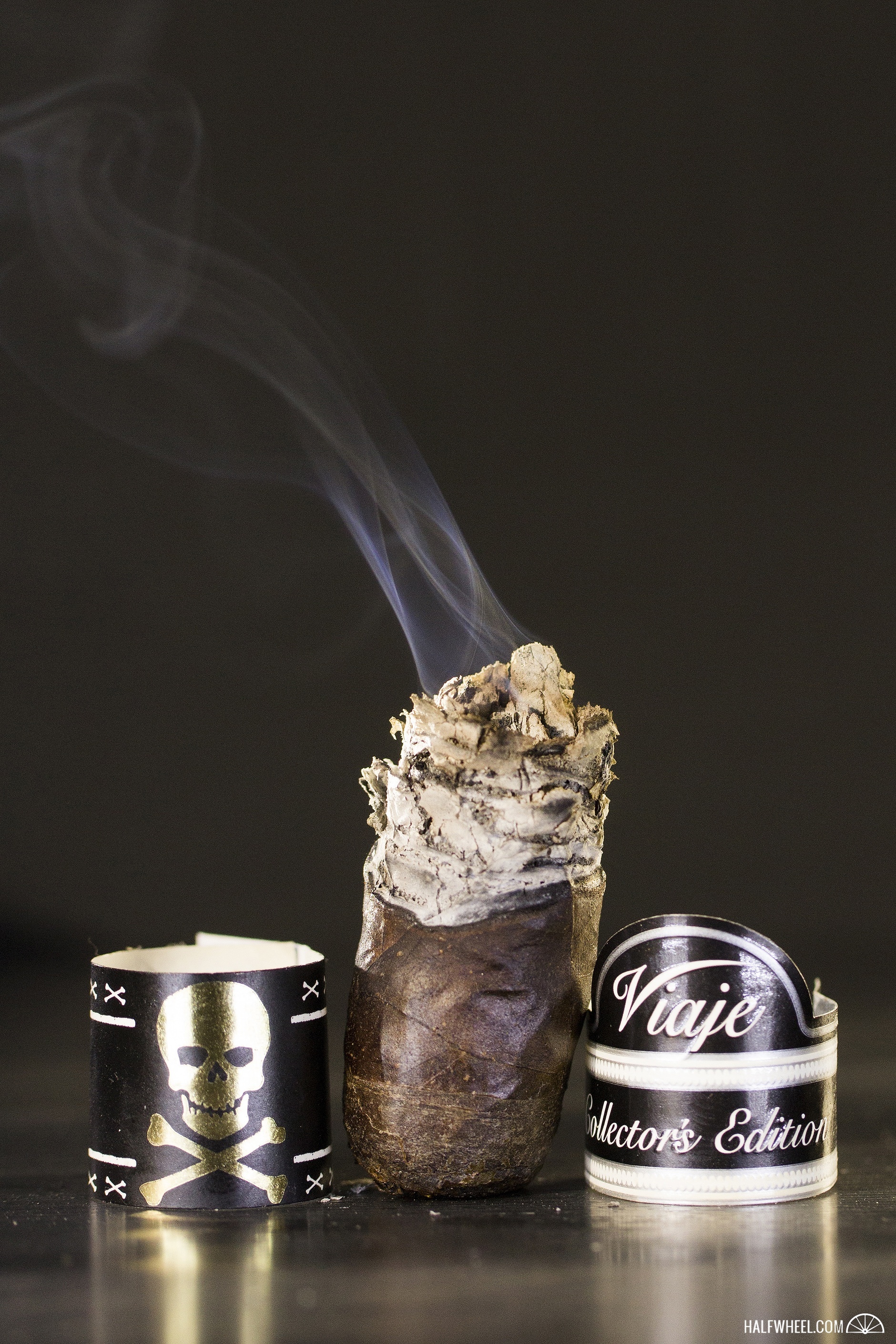 Given that the blend for the Viaje Skull and Bones Ten Ton Tess Gold Collector’s Edition isn’t being released, it’s tough to draw direct comparisons to other cigars in the line and make comments about how this size might be affecting the blend. What is consistent is a generally full-bodied smoke with good amounts of earth and pepper that for the most part do a good job staying balanced and not completely overpowering the palate, but rather challenging it at times with robustness and strength. With its big size, it’s a bit of a mountain to climb but fans of Viaje’s stronger flavor profiles should find it one worth attempting and one that delivers a good result at its completion.