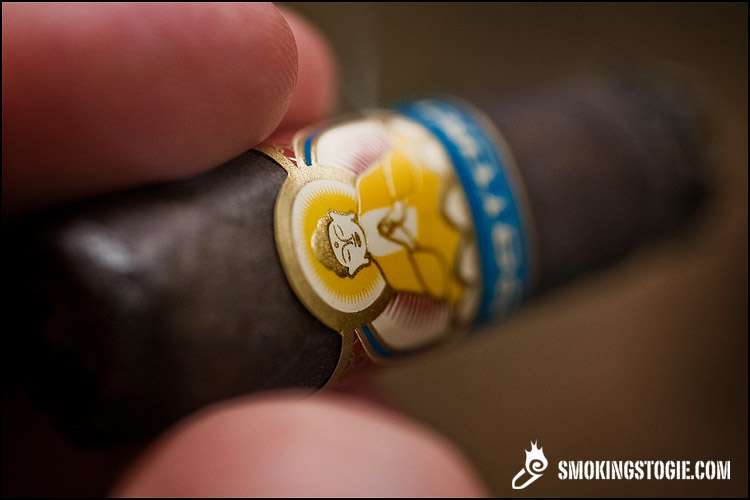 In August, at the IPCPR show in New Orleans, Viaje showed off another one of its limited releases. The Viaje Satori, which is named for a Japanese word that means “sudden spiritual enlightenment,” was released last week and sold out pretty much immediately.

However, unlike some of the llimited releases from Viaje, the Satori should be released every year, in roughly the same numbers, at around the same time, right after the IPCPR show.

This year, the Viaje Satoriwas released in three different vitolas, with each size only including 150 boxes of 25. The three vitolas are:

Here is what the boxes for the Zen look like: 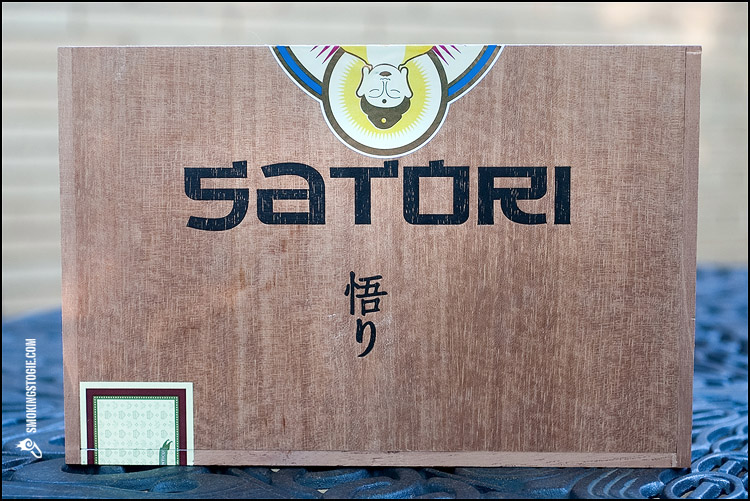 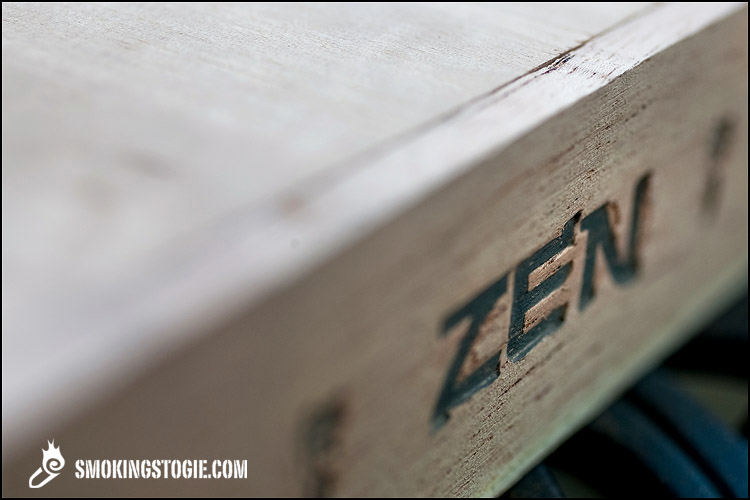 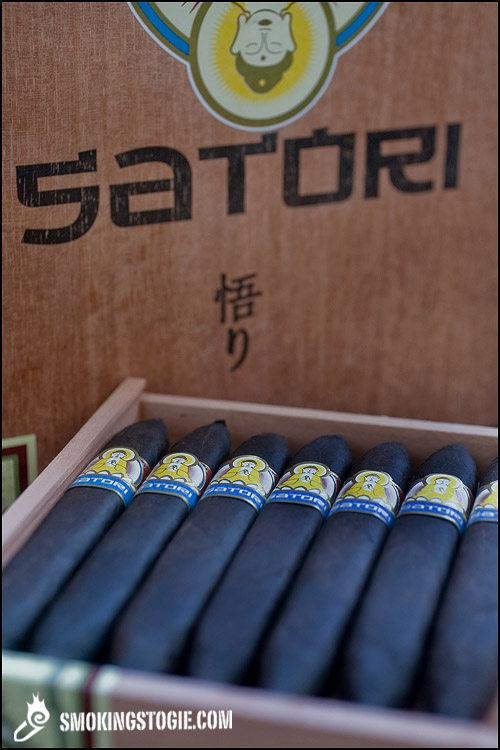 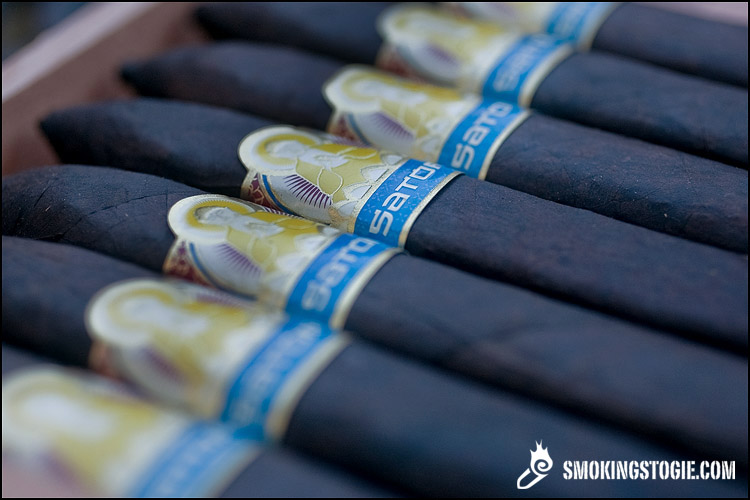 When opening the box of Zen that I purchased, I found a insert that had the following message on it, which I think does a great job of describing the thought process Andrehad when putting together this release. It says (in part):

Satori is the Japanese word for enlightenment, used to refer to a deep or lasting realization of the nature of existence. Experience has shown there are many paths to enlightenment: some may meditate, while others may practice Yoga. For me, cigars have often been the catalyst for achieving heightened awareness and a greater understanding of our complex and changing world. I have had the good fortune to meet many interesting people with whom I have spent countless hours deep in conversation with a fine cigar in hand. The experiences they shared with me, while we enjoyed our fine cigars, have truly enriched my life. This Cigar is a tribute to the enlightenment one can achieve while indulging in one of life’s great luxuries. 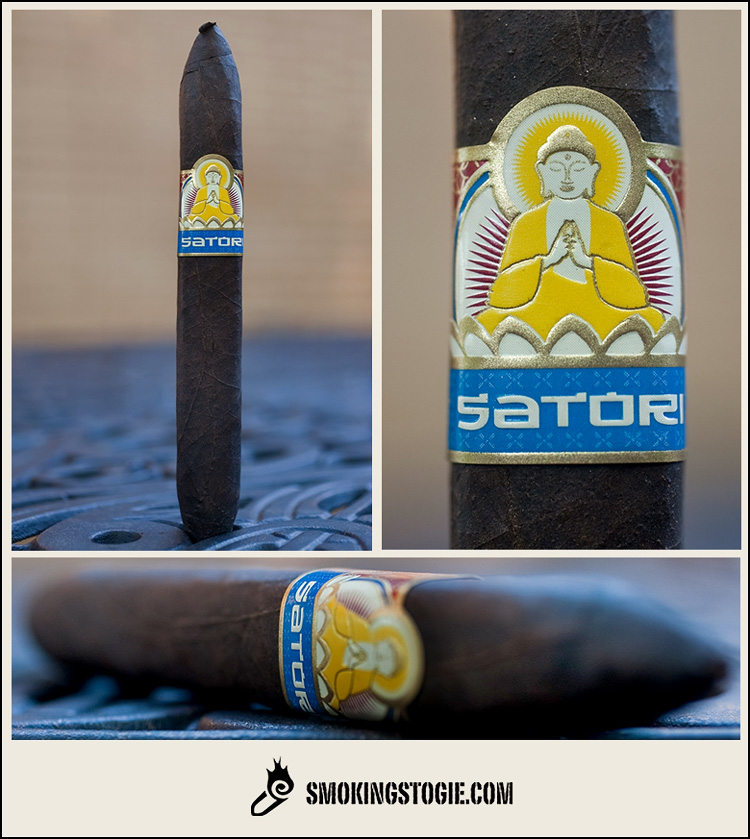 The first thing you notice about this cigar is the absolutely coal black wrapper. It is almost unnaturally dark, and the color is quite even as well over the entire cigar, more on that in the final notes. In fact, I shot a photo of one of the Satori next to one of the Viaje Exclusivo DES, to give you an idea of the extreme difference in the color of the wrapper. 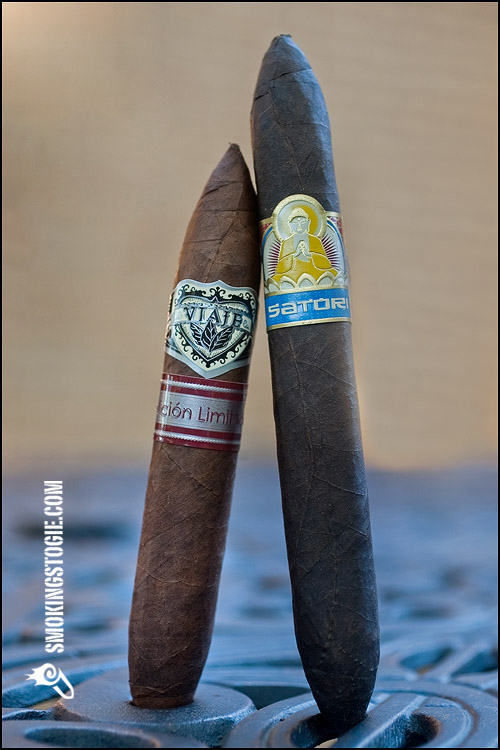 I love the vitola of this cigar, there is just something cool about a box-press double torpedo. The wrapper is totally seamless, and smells of cedar, spice and a bit of chocolate. It is very firm when squeezed, almost hard really. The predraw is slightly muted with flavors of tobacco, spice and a bit of leather.

The first third starts out with a small amount of pepper, leather and a very strong meaty profile. My notes say “kind of like smoking a pepper crusted steak.” It is not a bad profile, but it is slightly overwhelming. At the end of the first third, a charred flavor is also introduced. 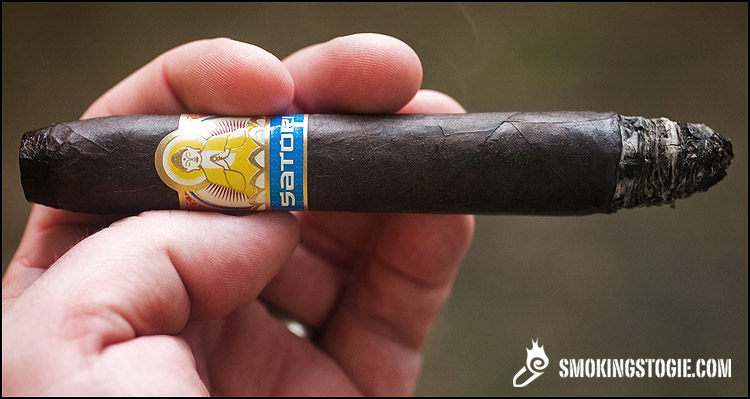 The second third does not add much. The meaty profile seems just as strong, but also a bit more creamy, however, about halfway through the second third, the flavors start to lose their punch and start to become more muted. Same flavors, just less and less intense as the cigar continued.

The final third is just more of the same. The profile pretty much the same charred meaty flavors with a bit of leather include. The cigar got quite a bit stronger as the cigar came to an end and also more and more harsh at the very end. A fairly disappointing end. 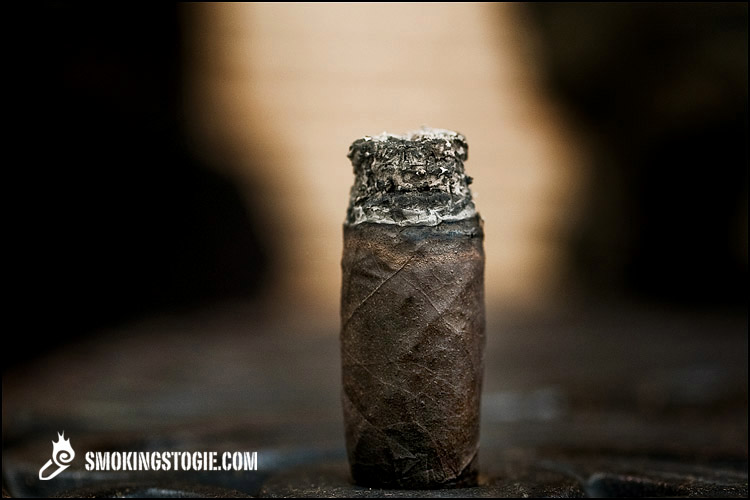 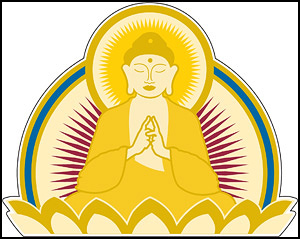 I have grown used to being impressed, albeit to varying degrees, with the Viaje limited editions , but quite honestly, the Satori Zen did almost nothing for me. While the flavors it had were interesting, the lack of any real complexity in the blend, the interesting meaty flavor, the muted profile of the last two thirds and yes, the wrapper color transfer did not help me, but I was left me wanting much more than I was getting. While the look of the cigar and the construction were all great, I found myself wishing I was smoking a Skull and Bones, or Double Edge Sword, or even a Exclusivo or Holiday Blend. All in all, an okay cigar, but unlike most of the other Viaje limited editions, just not worth the hype.