The 2012 Viaje Satori release marks the third year that the Satori has been released. In 2010 Brooks Whittington reviewed the Zen and in 2011 Steve Valle reviewed the Karma. Here is the background on the Satori line from Steve Valle’s review:

In 2010 Andre Farkas and his brand Viaje showed up at the IPCPR trade show in New Orleans with a limited cigar called Satori, which is a Japanese word that means “sudden spiritual enlightenment.” It was a jet black looking cigar available in three sizes, Karma (5 x 52 Robusto), Nirvana (6 x 50 Toro) and Zen (6 3/4 x 52 Box-Pressed Double Torpedo). These cigars were made for IPCPR only, specifically for retailers who attend the show. Andre Farkas has said he wanted to do something special for the loyal retailers who showed up at IPCPR. Only 150 boxes of 25 of each size were available and once they were gone they were gone, however this is in fact an annual release so every year during IPCPR these will be available in similar numbers.

The first two years saw similar cigars with slight differences. In 2010 and 2011 the sizes, cigar shapes, and release numbers remained the same however the wrappers were changed from a Nicaraguan oscuro to a Mexican San Andrés wrapper, respectively. In the 2011 and 2012 while we see the same sizes, wrapper origin and release numbers, the shapes have been reversed with the Karma and Nirvana sizes getting box-pressed and the Zen as just a regular double torpedo. 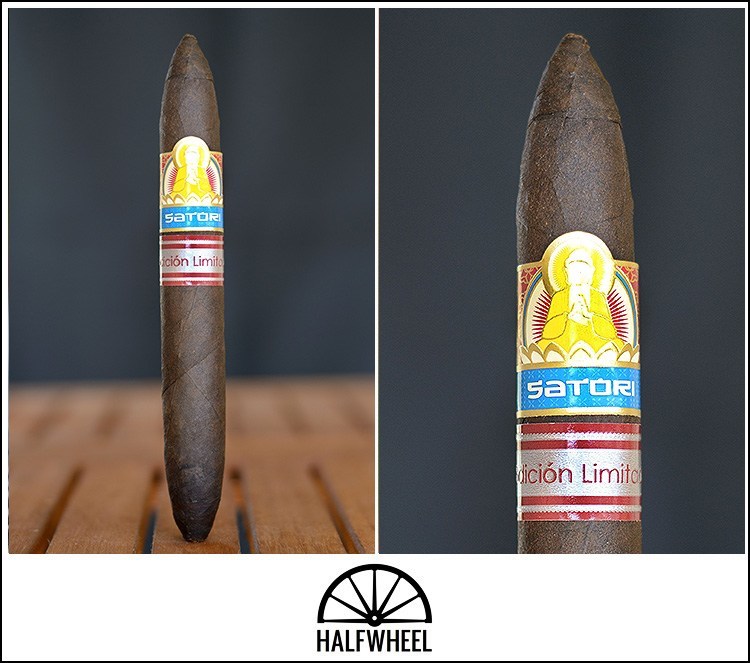 The Mexican wrapper is a dark chocolate brown and feels slightly toothy and a little oily. The seams are barely visible and the color is very consistent. The Zen is fairly hard except for a slight soft spot in the middle, but besides that there isn’t much give. The aroma off the wrapper is a strong barnyard smell, otherwise not much else. There are more barnyard notes on the cold draw with slight hay notes and an overall sweetness.

The first third starts off with a very earthy profile including notes of sweet tobacco, hay and some background cedar. In addition, there are some very minor pepper notes that mostly appear towards the finish. The burn of the Viaje seems to be a little off after it works its way past the torpedo-shaped foot but I’m hoping that corrects itself. The sweetness that it began with has turned into an interesting sweet and sour profile with the notes getting an overall sweetness at the beginning and turning a little more sour towards the end of the finish. More specifically I don’t mean sour in a bad way, more like a Sour Patch Kids candy but in reverse. Already there is another shift in profiles with a slight citrus and meatiness that in a way reminds me of spicy orange beef. Continuing on into the second third of the Satori I’m getting even more of a Asian fusion food profile. The sour and salty is really hitting the sides of my tongue with a bit of the pepper on the back. Very little sweetness is left, however the meatiness is still present. So far I can classify this as a full-bodied and medium to full strength cigar. There are bold flavors combined with a strength I’m already feeling halfway through the cigar even on a full stomach. The ash is a brownish white and holds to about three quarters of an inch. The burn continues to go slightly askew even after touch ups. Towards the end of the second third the sour, salty and peppery meatiness has all but disappeared and strangely enough hasn’t been replaced with any distinct notes. The final third has taken the blank flavor profile and turned it into what I would call another 180. Sweet cocoa, espresso, and a nuttiness dominates the profile. It continues on with this pleasant profile for a little bit but unfortunately starts to get bitter with a little less than two inches left. With the wrapper splitting as well, the cigar has literally and figuratively fallen apart at the end. I liked the Zen but it was hard to really sit back and enjoy it. The abrupt and complete profile changes really kept my taste buds on their toes. Fortunately even with the wild ride of flavors, they were all pleasant flavors. I can honestly say I’ve never had a cigar that tasted like orange beef, but somehow this flavor profile worked for the little bit it was there. The near constant touch ups were a bit annoying but they were not serious enough to be detrimental to the taste. Up until the last couple inches the entire cigar was smooth while at the same time producing bold flavors that weren’t harsh or bitter. Unfortunately that wasn’t the case in the final little bit of the cigar. With such a unique profile it’s hard for me to recommend you go buy an entire box seeing as it might not be down your alley but I can easily recommend grabbing a few to try.