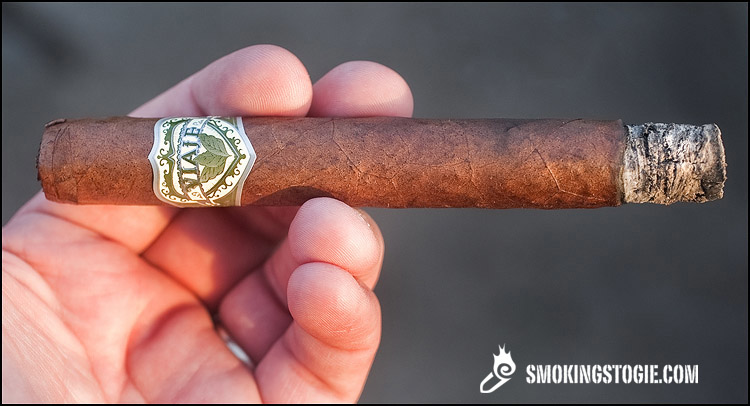 In 2009, Viaje started the tradition of allowing two different retailers to choose a vitola of one of their two core line of cigars, the Oro and the Platino, with different numbers of boxes, usually between 30 and 60. Last year, Habana Smoke Shop decided on a short figurado named the La Pequena for the Oro line, while another store (and I have been unable to find which one, so if you know, leave in comments, and I will update the post) decided on a 5 x 58 stick they named the Five Fifty Eight for the Platino line.

This year, the wonderful Tobacco Grove in MN and the also wonderful NHC were chosen for the honor. NHC decided on a 4 1/2 x 54 Petit Robusto they named the Fernando in the Oro line (only 30 boxes of 25 released), while Tobacco Grove decided on a Classic Corona Gorda (6 x 48) for the Platino line they dubbed the Samurai (only 60 boxes released), and this is the release we will be looking at today.

Here is what the boxes of the Viaje Samurai look like. The cigar itself is wonderfully constructed. The wrapper is a dark-ish brown color and is quite smooth with a few small veins but nothing very prominent enough to be a distraction. The wrapper smells like a great combo of leather, dark chocolate and spice. The cigar is slightly bumpy, and does have a bit of oil present on it but not a huge amount. The triple cap is very nicely applied. The pre-draw notes include a great sweet cedar and spice.

The first third starts out with the perfect amount of spice. I could easily taste flavors of leather, black pepper, earth and just a small amount of cedar. There was also a very subtle sweetness in the background that really set off the flavors nicely; a great start to a cigar.

The second third shifted profiles a bit. It was still earthy, but with more leather, and added quite a bit of a dark chocolate flavor as well as a nice coffee note. It was still slightly sweet in the background and the spice that was present in the first third calmed down quite a bit, although never totally disappeared, thankfully. Very quickly after the start of the final third things turned quite a bit spicier, and had a more bready profile, with a bit of cinnamon included. The leather and wood from the first two thirds are almost totally gone at this point. The cigar also gets quite a bit stronger as it moves towards the end of the stick although it never comes close to overwhelming. I was able to nub it easily, and it did not get harsh at the end. Honestly, I was extremely surprised by this cigar. At some time or another over the last two years I have smoked multiples of all of the vitolas in the Viaje Platinos line before, and I don't remember the flavors with those being quite so refined or vibrant except with the Lancero, which I loved. I really think that the ratio of the filler/wrapper/binder in the Corona Gorda vitola is what makes this blend shine. Add in the truly amazing construction, which was consistent on all the samples I smoked, and you end up with a winner. In fact, I liked this cigar quite a bit more than some of the recent Viaje limited releases like the Skull and Bones II, TNT and Holiday Blend 2010.