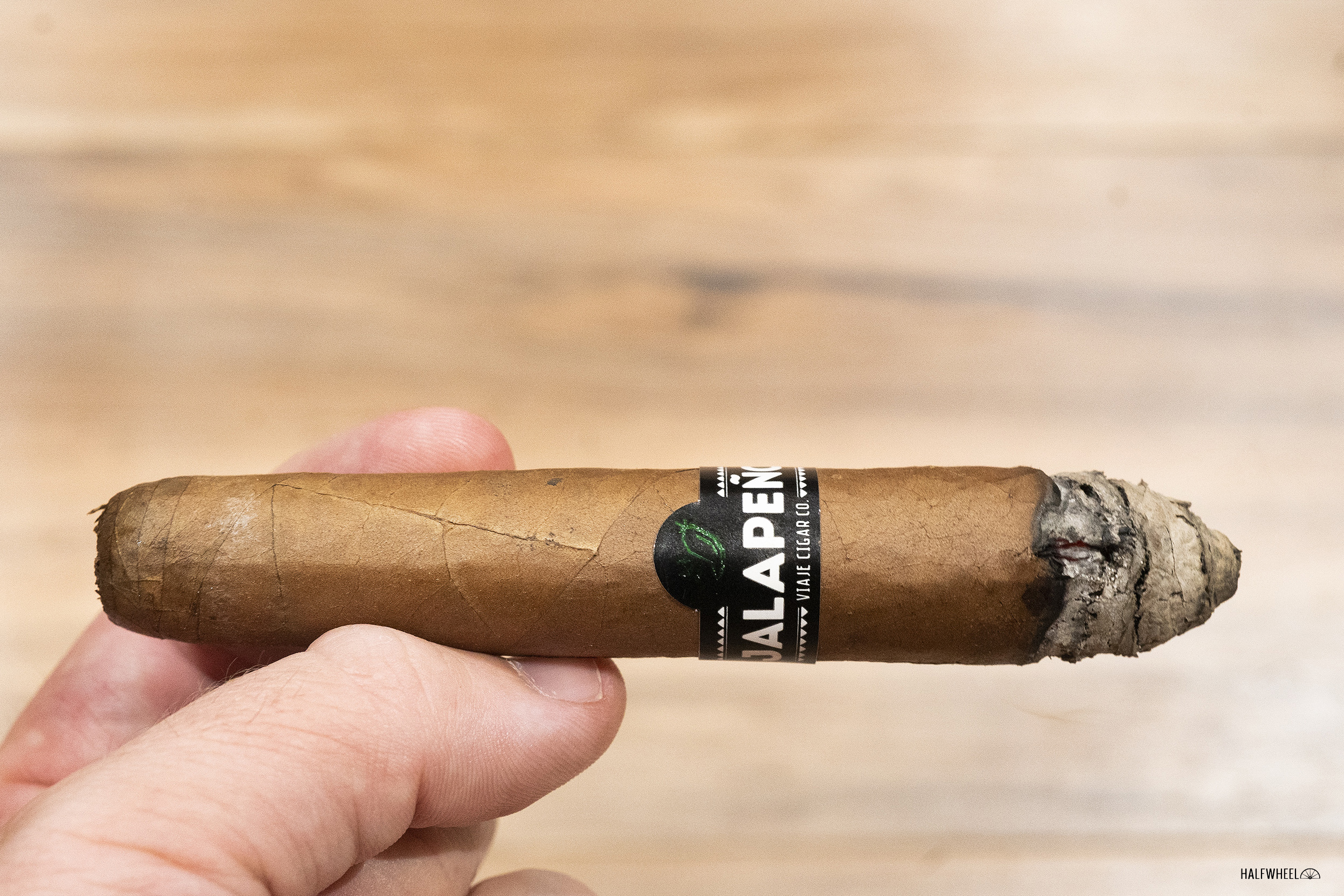 In March 2021, Viaje released the Phat Purple Jalapeño, a cigar that could be considered the third generation of its Pepper Series, which debuted in 2015 with the Viaje Jalapeño.

To create the Viaje Phat Purple Jalapeño, the company modified the blend of the original Jalapeño, selecting tobaccos that dialed back the strength while adding sweetness. While a representative of the company confirmed that the blend uses all Nicaraguan tobacco, they didn’t disclose what was changed to achieve that new flavor profile, however.

Like the other Phat pepper release, the Phat Carolina Reaper that hit stores in January, the Viaje Phat Purple Jalapeño is a perfecto that measures 5 13/16 inches long with a 55 ring gauge at its thickest spot, while the head is a few ring gauges smaller and the foot is crafted to come to a very small point. It has an MSRP of $9.44 per cigar and is offered in 25-count boxes. It’s made at an undisclosed factory in Honduras, with production numbers not disclosed, other than that a company representative described it as “just the right amount.” 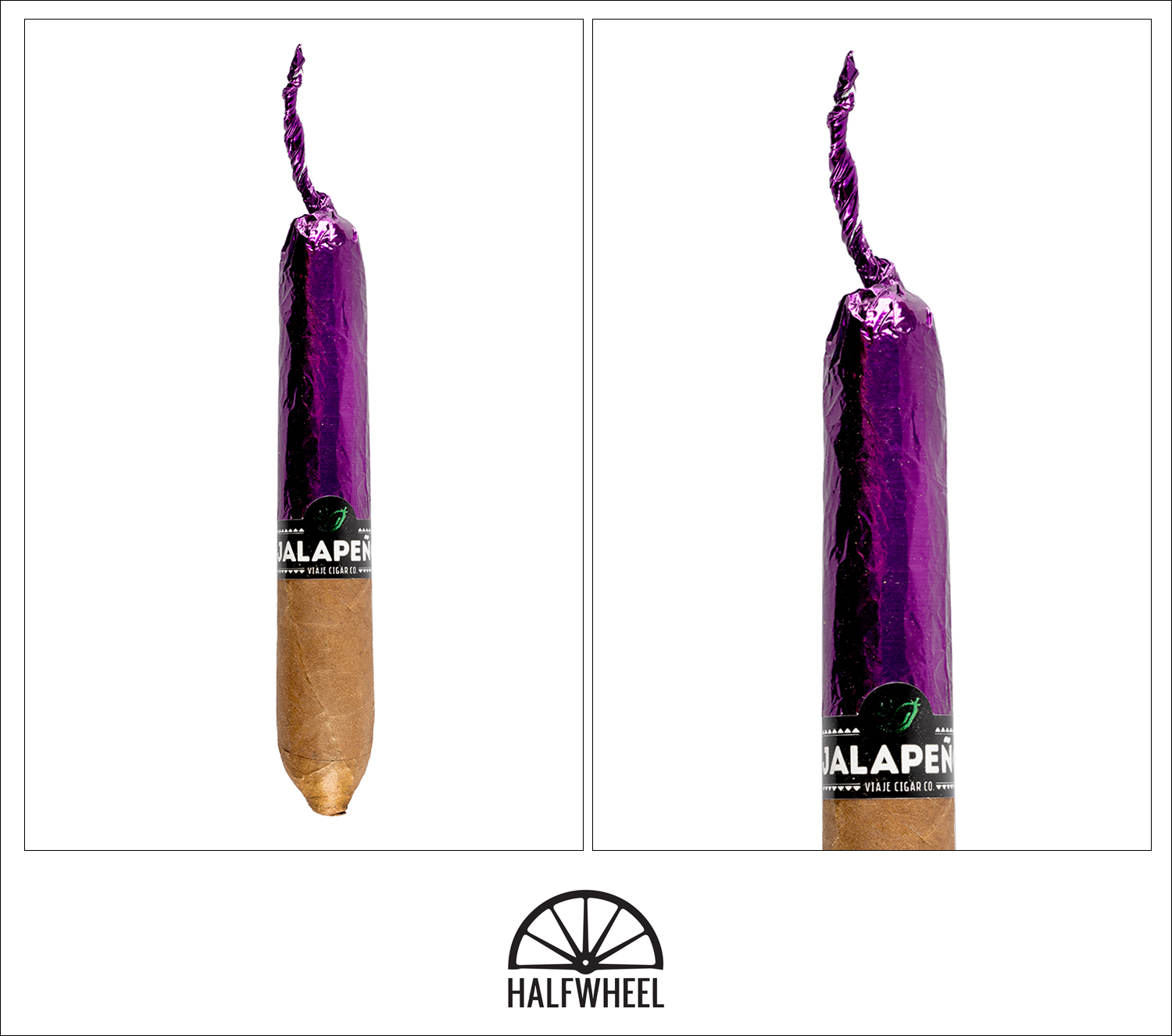 Despite the use of the word phat, I wouldn’t call the Viaje Phat Jalapeño a fat cigar, especially in the context of the larger cigar market. Thick, sure; but not fat. If anything, the cigar feels like a small club, or some other kind of blunt, log-like object. Besides the foot, the definition of the perfecto isn’t as pronounced as you might see on other cigar, as there isn’t a ton of taper from foot to head. The cigar certainly looks to be rolled well, with a couple of noticeable veins but nothing that is distracting or out of the ordinary. It is quite firm when squeezed, and each sample shows consistency in that regard. The wrapper has an aroma of the peanut butter crackers you’d find at a convenience store; it’s mild, only slightly nutty or cracker forward, but it’s a smell that’s familiar if that’s your go-to snack, as it is often mine. The foot is more or less closed, offering just a small opening through which to smell the tobacco, and the smell is more or less the same as the wrapper, meaning more of the peanut butter cracker aroma. Surprisingly though, there is no feeling of restriction on the cold draw, as air moves easily on two cigars and only with a slight firmness on the third. There is more of the peanut butter cracker sensation, though the flavor is a bit softer, reminding me of a soft, neutral bread flavor, with very light touches of wood and pepper.

After getting a bit more of the peanut butter cracker and bread note right out of the gate, the cigar kicks up the pepper as the burn line makes its way through the rounded foot and presumably begins burning all of the tobacco in its intended ratio. That pepper backs off from the palate around the one-inch mark, which is also the point where the burn line evens out quite nicely, though there is still plenty to be found through the nose when desired. In the early goings, the cigar offers plenty of medium-bodied smoke, enough to easily fill the mouth and nose with each puff. In wanting to search out for whatever I can find to fit into the category of jalapeño-esque flavors, I find myself retrohaling quite a bit to focus on a bit of peppery heat. Without the juiciness of an actual jalapeño, it is only a portion of the full flavor, but there it offers just enough to be fitting of the cigar’s name. Construction is fantastic, as each cigar seems committed to straightening out the burn line once it passes through the curves of the foot. Flavor is medium-full, body is medium-plus, and strength is medium.

The second third of the Viaje Phat Purple Jalapeño picks up a dusting of dry earthiness, a flavor that reminds me a bit more of Honduran tobacco than Nicaraguan. There is a very subtle bit of sweetness, and now it’s a bit juicier than earlier. I can’t quite place it, and I’m fighting the urge to just call it jalapeño-esque, or at least the kind of flavor from the liquid in a jar of jalapeños. At the midpoint of the cigar, the flavor picks up just the slightest bit of char, which has the effect of drying out the flavor more than really affecting the flavor. It’s also a point in the first sample where I realize that I haven’t found much in the way of sweetness in any of its forms, outside of however you want to describe the sweetness of peanut butter and that jalapeño juice note from earlier. Retrohales remind me that they are by far the most vibrant part of everything that the Viaje Phat Purple Jalapeño has to offer, as there is not only table pepper but a bit of heat and the tingle that peppers provide. It’s not quite the same as wasabi, but having had sushi for lunch a few hours before smoking one of the samples, the parallels are fairly easy to draw. The draw is fantastic, which when combined with the very good combustion still produces copious amounts of smoke. Flavor and body are both right around the medium mark, while strength feels to be closer to medium-plus. The start of the final third brings about a slight flavor change by way of touches of butter, which again is not particularly sweet but does hint at the idea. There is still white pepper in the profile, though little that would elicit thoughts of jalapeños, either directly or even by way of a similar physical sensation. There’s still some dry earthiness, which coats the palate pretty thoroughly and leaves a lingering finish after each puff. The heartier black pepper is still part of the equation, though a bit more restrained than it had been earlier, at least on the palate. Retrohales are a different story, as they are still quite peppery, delivering a big, quick hit of white pepper with a bit of nuttiness to be found in the aroma. Heat rapidly joins the profile with just over an inch to go, imparting a distinct effect on the lips and several spots in the mouth. There seems to be the occasional struggle with combustion in the final third, which I’m guessing might have to do with some residual humidity, but otherwise the cigar burns as well as it has to this point. Flavor finish medium-full, body is medium-plus, and strength is medium-plus with one sample closer to medium-full. The Viaje Phat Purple Jalapeño is one of the more impressively solid offerings that I have had from the company in recent memory. The name feels a bit misleading, but the flavors that the cigar offers are more than enjoyable enough to make up for that. First and foremost, this cigar does not taste like a jalapeño, so if that is a concern, allow me to alleviate it for you. There are some bright flavors that involve pepper and a bit of peppery heat, but the vast majority of them require you to retrohale, something often encouraged on this site but hardly a mandate. While I don’t think the Viaje Phat Purple Jalapeño has quite the nuance and complexity of the Exclusivo, which remains my favorite blend from the company, this is a cigar I could easily see having some more of in my humidor as it not only performs quite well now, but shows that could evolve positively in the near future.