At the top of that list lies the Carolina Reaper, a varietal created by Ed Currie of PuckerButt Pepper Co. In case you are wondering how spicy it is, the company’s website lists its uses as “hot sauces, salsas, cooking, settling old scores and combat.”

In 2015, Viaje released the first in its Pepper Series, starting with perhaps the world’s—or at least North America’s—most famous pepper, the Jalapeño. As the years have gone on, there have been other cigars named after peppers with high Scoville ratings, including the 2018 release of the Carolina Reaper.

The cigars in the Pepper Series have generally followed a pretty standard format: a 4 7/8 x 51 perfecto that has a piece of foil covering the top part of the cigar that is wound to look like the stem of a pepper. Last year, Viaje added a slight variation of the concept with the release of the Phat Jalapeño, a larger 5 3/16 x 55 size.

This year, the Carolina Reaper got its own Phat version.

The Carolina Reaper blend is made entirely of Nicaraguan tobacco. For the Phat Carolina Reaper, Viaje told halfwheel that the cigar is being produced at Raíces Cubanas in Danlí, Honduras. The company declined to say how many cigars were released, but like virtually all Viaje cigars, it appears to be limited—at least for 2021—to a singular release, in this case, one that shipped to stores in January alongside two Super Shot cigars. 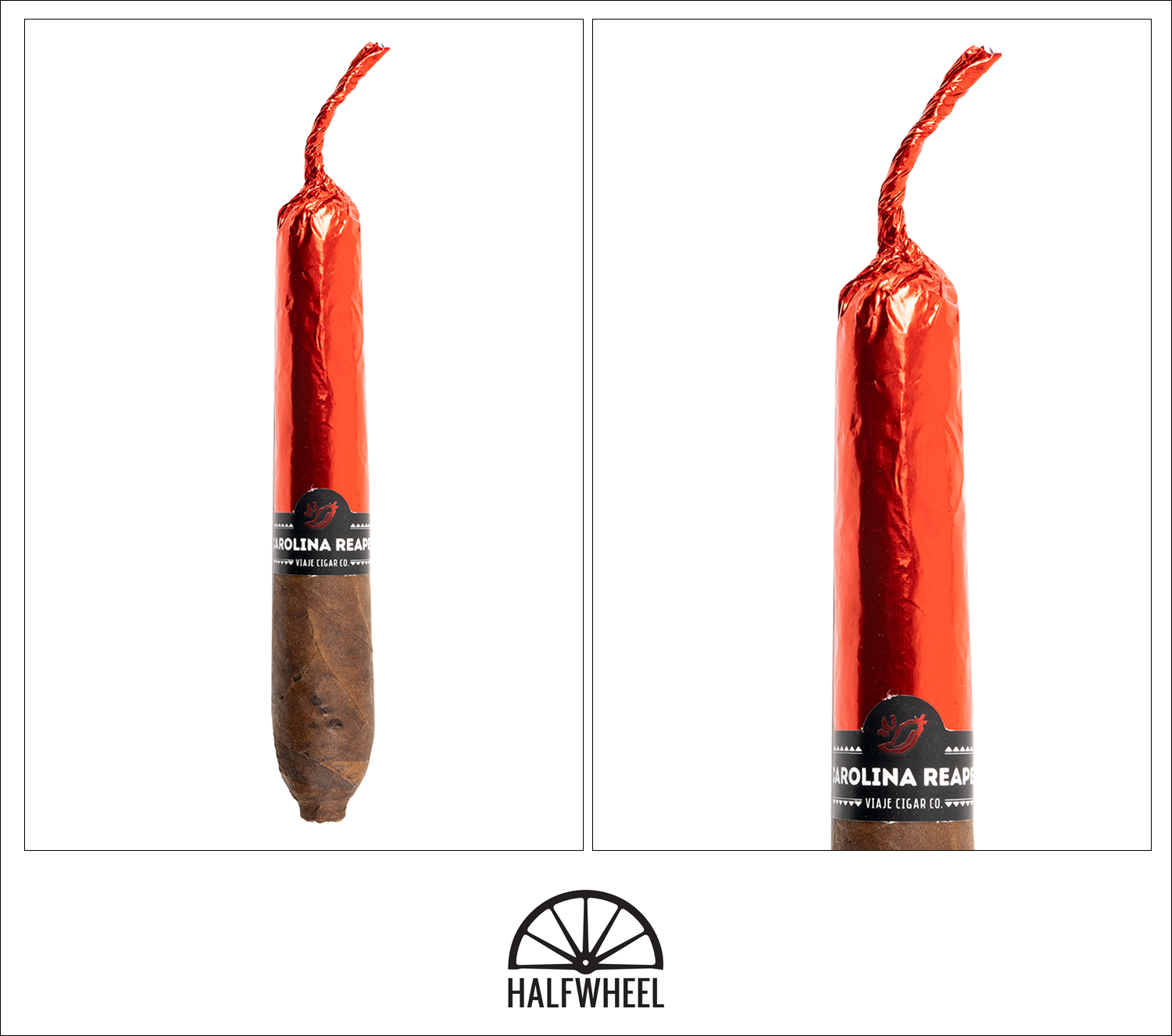 The majority of the length of the cigar is covered thanks to the combination of the red foil and the band, which is placed just below the halfway mark of the cigar. The two pieces are attached, though I can easily remove the foil from the band without any damage. The wrapper is dark—though certainly far from the darkest of Viaje cigars like Satori—and has a hearty feel to it thanks to a decent number of veins. The wrapper has a really funky barnyard smell to it along with some chocolate and creaminess. When smelling the foot, it’s tough for me to tell just how much of the smell is coming from the wrapper and how much is coming from the filler. I still find the barnyard flavor, though it’s reduced and overshadowed by a charred meat sensation. Cold draws are intense on all three cigars with lots of tingling sensations hitting my palate. Flavor-wise, I pick up an interesting mixture of chocolate and sweet apples, somewhere around medium-full.

It begins with a funky barnyard sensation over some meatiness, mineral flavors, leather and creaminess. After two or three puffs, the draw on the Viaje Phat Carolina Reaper opens up, which is great on two cigars but not ideal for a third sample. The mouth flavors have some earthiness, meatiness, a slightly less funky version of the barnyard sensation and some red pepper. It finishes with barnyard, minerals and coffee. The pepper lingers, though it doesn’t seem to get more intense on the finish. Retrohales are quite a bit different with bread, minerals, meatiness, leather and creaminess. There’s an enjoyable berry sensation that develops on the finish and sits on top of the earthiness. Flavor is medium-full, body is medium and strength is medium-full. Two cigars have great construction, one sample has a draw that is too open for me and forces a quicker puff rate, though I never have to touch up the Phat Carolina Reaper in the first third.

Right as I’m about to remove the band, I realize just how much red pepper is now present. It’s a subtle build-up, but by the halfway mark the pepper is living up to what could be inferred from the cigar’s name. Behind that is earthiness and meatiness; the combination makes for a pretty dry flavor profile that seems to be begging for a pairing with a sweet, cold drink. The finish has a cognac flavor before some nuttiness hits the profile. As I let the finish go on, I get some dry bread and grain alcohol flavors. There’s a generic pepper that lingers, neither as intense nor as specific as the red pepper I found on the main flavor. Retrohales seem a lot sweeter, though they aren’t actually that sweet. There’s a generic sweetness that sits as an undertone, but if anything, it’s just not as dry as the main flavor. I still get some of the earthiness and cognac, but surprisingly no real pepper. As I let the remnants of the retrohale sit on my palate, I find some more earthiness, cognac, a weird fruitiness and a lingering but declining pepper flavor that seems like it’s just a leftover  from the regular puffs. Flavor and body are both medium-full. Strength-wise, it seems like it’s medium-full, though I can also feel the effects of the nicotine building. The sample with the open draw needs a touch-up in the second third, but otherwise construction remains excellent. The final third of the Viaje Phat Carolina Reaper adds a saltiness that creates a different type of profile. That being said, the other flavors are rather familiar: earthiness, bread, leather and a declining amount of red pepper. While the pepper is far from the intensity that it had in the second third, it does seem to build a bit as the finish takes hold, morphing into more of a green pepper sensation. Otherwise, the finish has lots of generic earthiness and some woody flavors. The finish keeps the earthiness along with a cedar flavor. Retrohales seem to just make the main flavors—sans saltiness—more intense. There’s grains, green pepper, leather and cedar. The finish of the retrohale has a familiar grain alcohol sensation along with some woodiness, leather and barnyard. Flavor and body both finish medium-full, while strength is definitely full. Construction is more or less the same as before: two samples are great, while one sample has a very open draw. 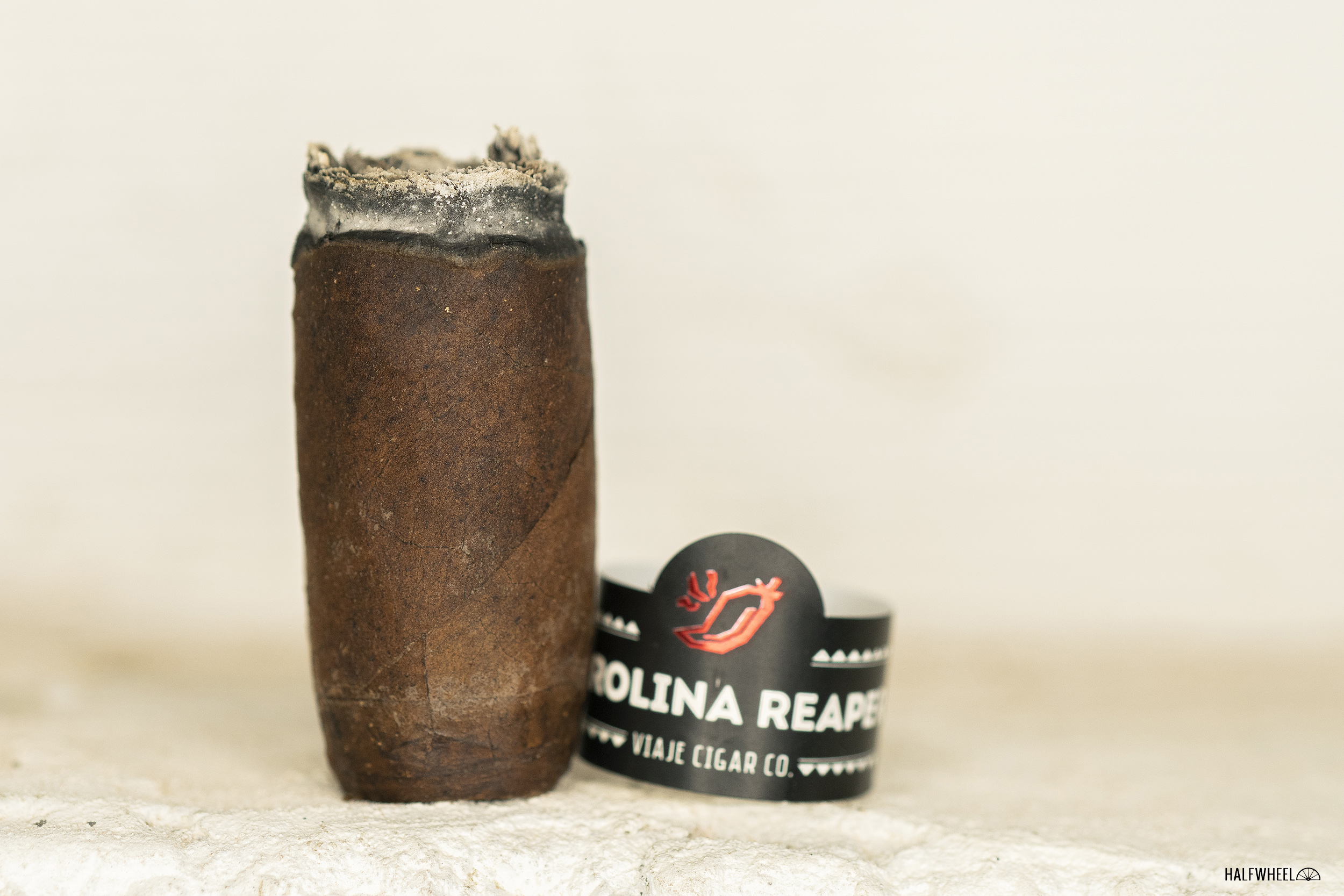 The one sample with the open draw notwithstanding, I think this is probably what Viaje would want for a cigar with this name. It’s not an unrestrained barrage of specific pepper flavors, but it captures the spirit of the name very, very well. That predictably means that it’s not the most complex cigar in the world—though there are plenty of flavors to be found—nor will be it be a cigar that is for everyone or every moment. If you like very spicy cigars with a bit of strength, this is certainly one worth seeking out. But be warned, this isn't the spiciest cigar you are going to have.