About a month ago, Viaje’s Facebook page started posting various updates that were all in the same vein.

Terms like “BE WARNED!” and “Widespread destruction is now being reported across the U.S.” Along with the updates was a red skull and crossbones on black, a play on the original Skull and Bones release last year, the logo of which was white and black.

There have been four cigars in the Skull and Bones series in the last two years. It turns out that as expected, the newest Viaje release was a variation of the Original Skull and Bones blend. This the third incarnation of the blend and for the first time, there are two different vitolas released at the same time.

As with most of the recent Viaje releases, both sizes are quite limited in numbers, with only 250 boxes of 25 of the WMD, and only 50 Cases of 100 of the MOAB. Most Viaje retailers received between five-10 boxes of the WMD and at least one case of the MOAB.

Thanks to Saddam Hussein, we all know that “WMD” means, but you may not have known that there is a town called “Moab” in Utah and is it is also the historical name for a mountainous strip of land in Jordan running along the eastern shore of the Dead Sea.

And, although most people think that MOAB stands for “mother of all bomb,” the name actually stands for “Massive Ordnance Air Blast.” Interestingly, the bomb this cigar takes its namesake from is over 30 feet long and uses 18,700 lb (8.5 tons) of high explosives. Lastly, the first release of the Viaje Skull and Bones was dubbed the Daisy Cutter, which is actually the nickname for another bomb which was developed and produced before the MOAB) 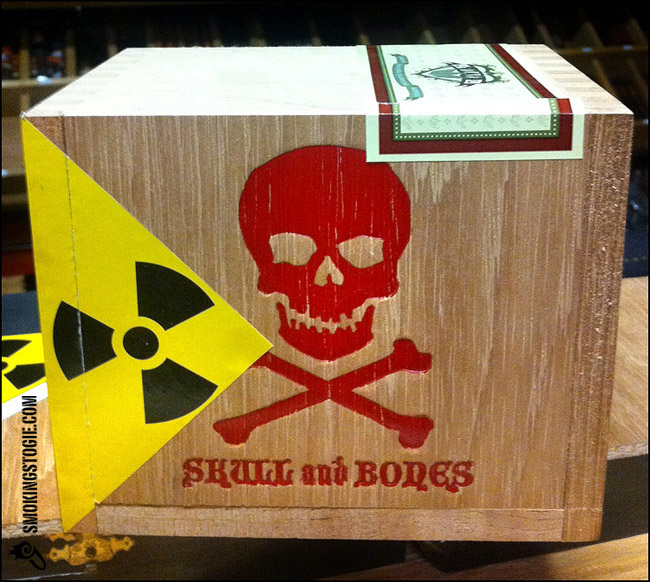 And here is what the box of MOAB looks like: The cigar itself is a very interesting vitola, more like a cross between a NUb and a torpedo than anything else, similar to the NUb 454T. The wrapper is a dark dark brown with quite a bit of oil present, and smells like a combination of espresso, dark chocolate, hay and wood. It is a bit spongy when squeezed, but not overly so. The cold draw includes dark and bitter chocolate, leather, wood and pepper.

The first third has some spice and black pepper to start, but they exist in harmony with flavors of oak, leather, espresso and just a little bit of cinnamon on the retrohale. It is a very woody profile to start, and I quite enjoyed it. The second third has stronger cinnamon notes present than the first third, but the spice and pepper are down. The profile is still wood overall and there is a rich tobacco note as well. I could tell the cigar was getting stronger by this point, but it was still on the medium side.

The final third really took off, strength-wise. It flew out of the gate, hitting me right between the eyes. It went from medium to full in about 10 puffs and really took me by surprise. Unfortunately, the strength, while a nice surprise, overwhelmed just about any nuances that the last third may have had, and all I could taste was the same woody profile with some espresso and leather. I went into smoking these cigars hoping it would be a better experience than the Skull and Bones “?"—which to me was an almost comically awful release—and I must say, I was not disappointed. While not as complex as the the Daisy Cutter, both the MOAB and the WMD both are quite a bit stronger, especially in the last third. The major problem I have with this newest Skull and Bones release is the price, which for me is about four dollars too high for the size. The flavors are good, and I think they will only get better with age, but honestly, I think I will be waiting for the Tower 45th Exclusivo to buy a box.