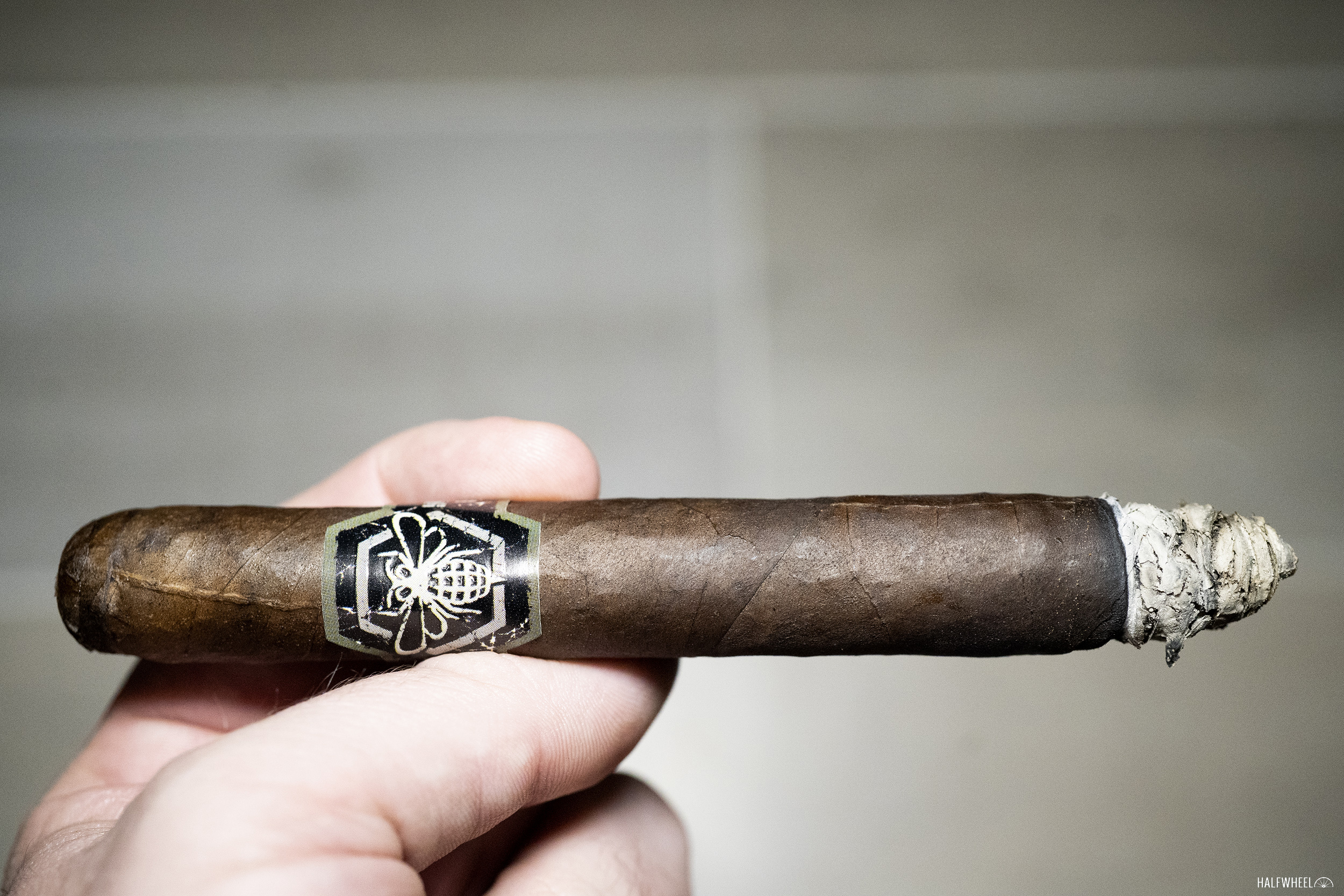 Just as spring was getting into gear across the country, Viaje announced that it would soon be shipping its newest release to retailers, a maduro version of its Honey & Hand Grenades line.

To create the line, the company swapped out the Nicaraguan criollo wrapper of the original version for a Mexican San Andrés maduro wrapper. Specifics about the rest of the blend have not been disclosed, and a representative from the company declined to comment on the release when halfwheel inquired about them.

Going by retailers’ listings, the maduro version returned in the three sizes that have been used in the original blend, each of which is name for a type of blade-style weapon, one of which is named for a centuries-old slender sword, while the other two are more associated with improvised prison weapons:

Each also retains the signature red foil paper wrapping, which according to brand owner Andre Farkas is added to evoke the idea of blood on one of the above weapons after it has been used. The cigars are packaged in the same 25-count wooden boxes as the original Honey & Hand Grenades, though with a sticker on the lower right corner of the front panel indicating that these are the maduro version. 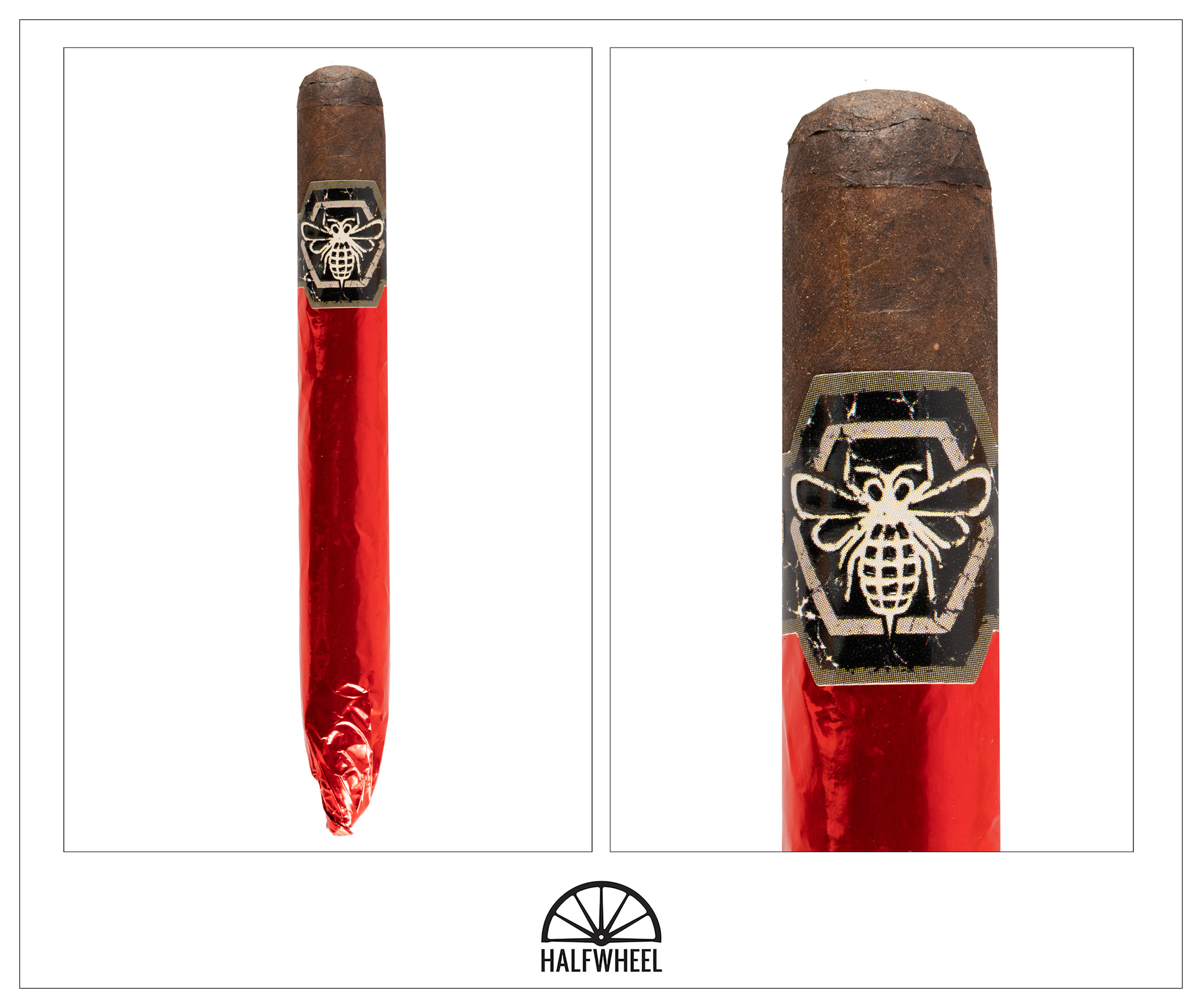 If you didn’t know the meaning of the vitola name, you might just think this is a fancy cigar wrapped in a bright, shiny piece of red wrapping paper. Of course, knowing what a shiv is—a homemade or improvised knife or razor used as a weapon—and how it’s used, the appearance takes on a more vivid impression, and one that I will say is pretty well done. That paper is applied pretty tightly, but there’s enough of a gap to slide the paper off, and with it not attached to the band, that helps the cause. Alternatively, you could use a blade to cut the tape that holds the paper in place, a more direct method.  Once undressed, the cigar shows its inverted belicoso shape, a fairly normal-looking cigar that comes to a quick, covered point that can also be fairly sharp depending on the sample. That point can also be a couple of shades lighter than the rest of the cigar, which is a very dark and rich shade of brown. It’s a dry wrapper leaf with a bit of texture for the fingers, while the cigar itself is generally quite firm, the first sample almost hard, but my fingers do stumble upon a few softer spots. The covered foot doesn’t reveal the full aroma of the cigar, but instead a fairly singular dry earthiness, almost the smell of a resting field of dry soil. The cold draw is an exercise in futility, as it appears the covered foot is completely obstructing airflow. That doesn’t leave me much to explore or write about, other than a bit of tingle that the tobacco imparts on my lips.

I was correct about the covered foot impeding the airflow; almost as soon as I light the cigar I’m able to get a good draw from the cigar. As the tapered foot begins to burn and more tobacco combusts, smoke production increases, to the point where I’m a bit surprise just how much smoke the cigar is offering. Much like the combustion, it takes a few puffs for the flavor to get going, and when it does there’s a tastebud-tingling black pepper and some dry earthiness, a simple but engaging profile out of the chute that can get sharp on the throat but is generally enjoyable. There’s the addition of just a bit of creaminess in the first inch that softens the profile a bit, filling it in around the edges and giving it a bit more complexity. After knocking off the first clump of ash, I retrohale the smoke and get what I would consider to be a signature of many Viaje blends, a bright, black pepper-forward tingling of my nostrils. The flavor picks up more of the creaminess as the first third continues, and there are a few puffs where I get something between orange and peach, almost reminding me of a Creamsicle or one those plastic cups of ice cream with the removable wax paper lid. The technical performance has been very good thus far, with a good draw, even burn line and plenty of smoke. Flavor is medium-plus, body is medium, and strength is a surprising medium in the early goings.

The second third keeps the profile on the dry side but adds some tree bark to the mix, while black pepper increases its presence, particularly through the nose on retrohales. The cigar is at its best when there is some creaminess to the profile, as it helps both the flavor and the mouthfeel of the smoke, even though it doesn’t do much for the complexity of the profile. As the burn line moves through the second third, it seems that the flavor is content staying where it is, which is an enjoyable spot if not very complex or abundant with flavors. The one thing that happens with consistency is the emergence of some sharpness and harshness, more the former resulting in the latter. I can’t tell if it’s the progression of the blend or a bit slower smoking rate that helps the issue, but regardless it helps calm things a bit at first puff. Yet as soon as that thought gets jotted down, there’s some harshness on the finish that I can’t seem to shake, a building bit of irritation right at the top of my throat. It’s almost as if the pepper that had been sitting well on the tongue goes rogue and decides to target the back of my throat, which comes with what should be easy-to-imagine effects. One cigar doubles down on that and becomes an irritant to my eyes as well. Other than some occasional combustion issues, the cigar performs well, with good smoke production, a well-calibrated draw and a generally even burn line. Flavor is now medium-full to almost full while body is medium-plus. Strength is a bit harder to pin down, as there is enough irritation to make me think it’s a stronger cigar than it is. Still, there is a bit of nicotine being felt in my system. The final third starts when a bit of robustness joins the profile; it’s hard to pin down a specific flavor change, but the physical sensation is a bit more grating on the taste buds and the back of the throat. It’s largely a continuation of the changes from the second third and a buildup of what was detected in the first third. The profile is still quite dry with an incredibly long finish on the tongue, a sensation that has taken on one similar to that imparted by red chili peppers, even though the flavor isn’t present in the profile. I could make the case for dry woods and dry earth in the profile, though neither feels quite right or what I generally associate with those terms. That leaves me to deal with the physical sensation primarily, which becomes less enjoyable as the cigar approaches the finish line Flavor finishes medium-full with one of the most lingering finishes I can recall, the body is medium-plus and fairly robust, while strength is medium-plus to medium-full, enough to be felt but not enough to be too much for my system. Outside of the occasional touch-up, combustion has been very good, while the burn line stays even and smoke production remains very good. 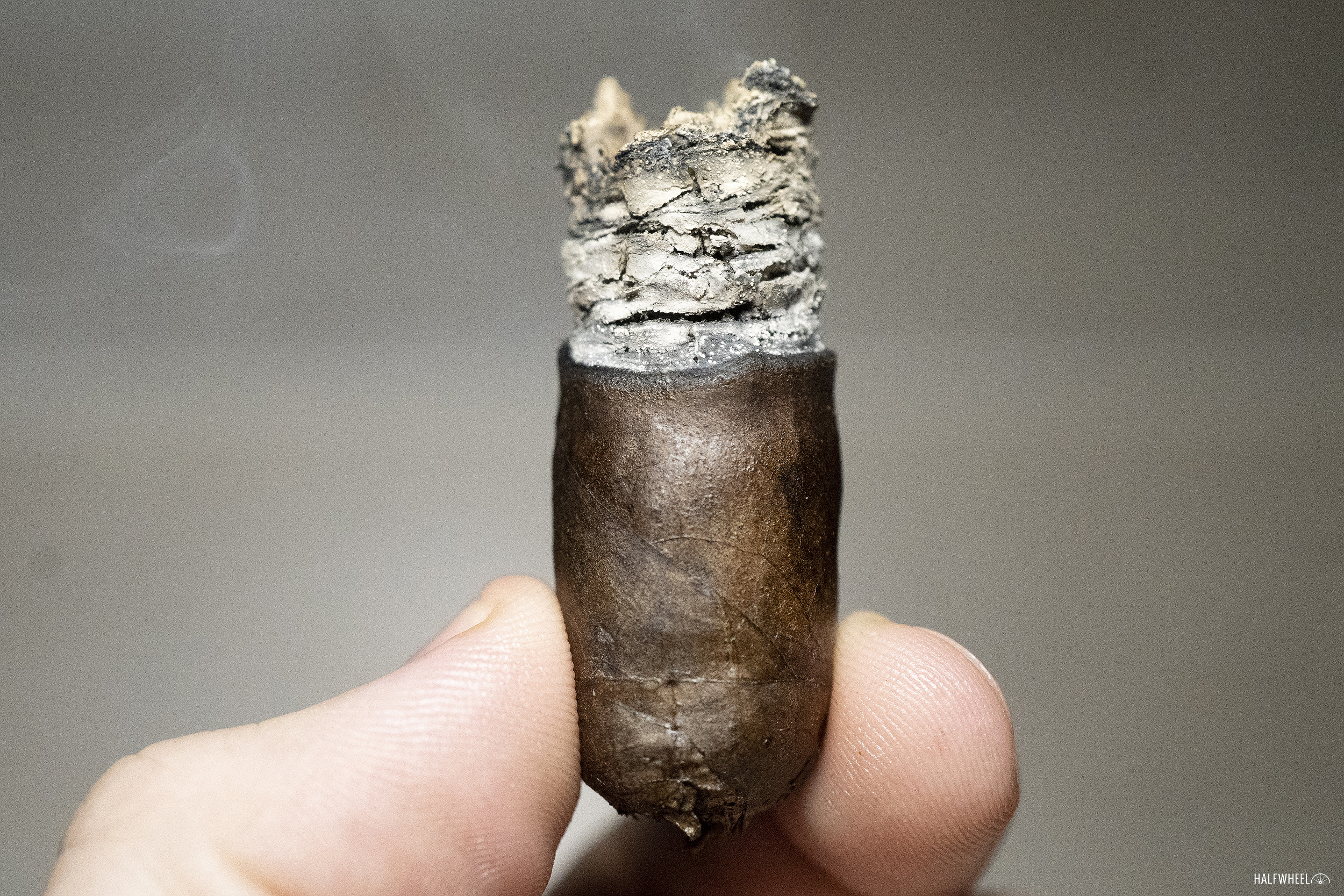 The Viaje Honey & Hand Grenades Maduro The Shiv is a bit of a frustrating cigar, showing a decent if somewhat pedestrian first half that keeps it straightforward with black pepper, dry earth and woodiness, introduces some creaminess and the occasional accent of light fruit sweetness, which makes for a pretty enjoyable first half. But from there it's a fairly quick unraveling with the pepper leading the revolution against that first half and making the cigar harsh on the taste buds and the throat. It's almost commendable that that it doesn't go all the way over the line until well into the final third, which will aid the cigar's score more than if you had asked me what I thought of each sample right after smoking it. I'm concerned about the second half showing combustion issues, so if you do decide to smoke some of these, I'd highly suggest dry boxing them a bit, possibly even clipping the cap ahead of when you think you'll be smoking it just to help it out a bit. There's enough in this cigar to still have me intrigued, but also enough that has me feeling a bit let down by it, and ultimately won't have me rushing out to pick some up to put in the humidor to revisit down the road.