Two years ago, Viaje shipped a variant of its White Label Project Hamaki release that was round instead of box-pressed and measured 6 x 52 instead of 6 x 54. The cigar was the Hamaki Omakase, which returned in May and gets its name from the Japanese language: while Hamaki translates to cigar, the Omakase directly translates to I will leave it to you, a reference to a Japanese dining term where diners allow the chef to choose their meal, most commonly as sushi restaurants.

“Limited information beforehand creates a memorable dining experience for the guest; it will not be like any other meal,” explains a post on Viaje’s Instagram account. “The best approach is to clear your palette, let go of expectations and focus on the experience the chef has created for you.”

As with the original version in 2017, Viaje has been very tight-lipped about many of the details in this sophomore release, but we do know three things other than the vitola size: it was produced at Tabacos Valle de Jalapa S.A.(TABSA) in Estelí, Nicaragua, it is packaged in boxes of 18 and the foot ribbon on the cigar can be turned into a paper star using an origami technique. 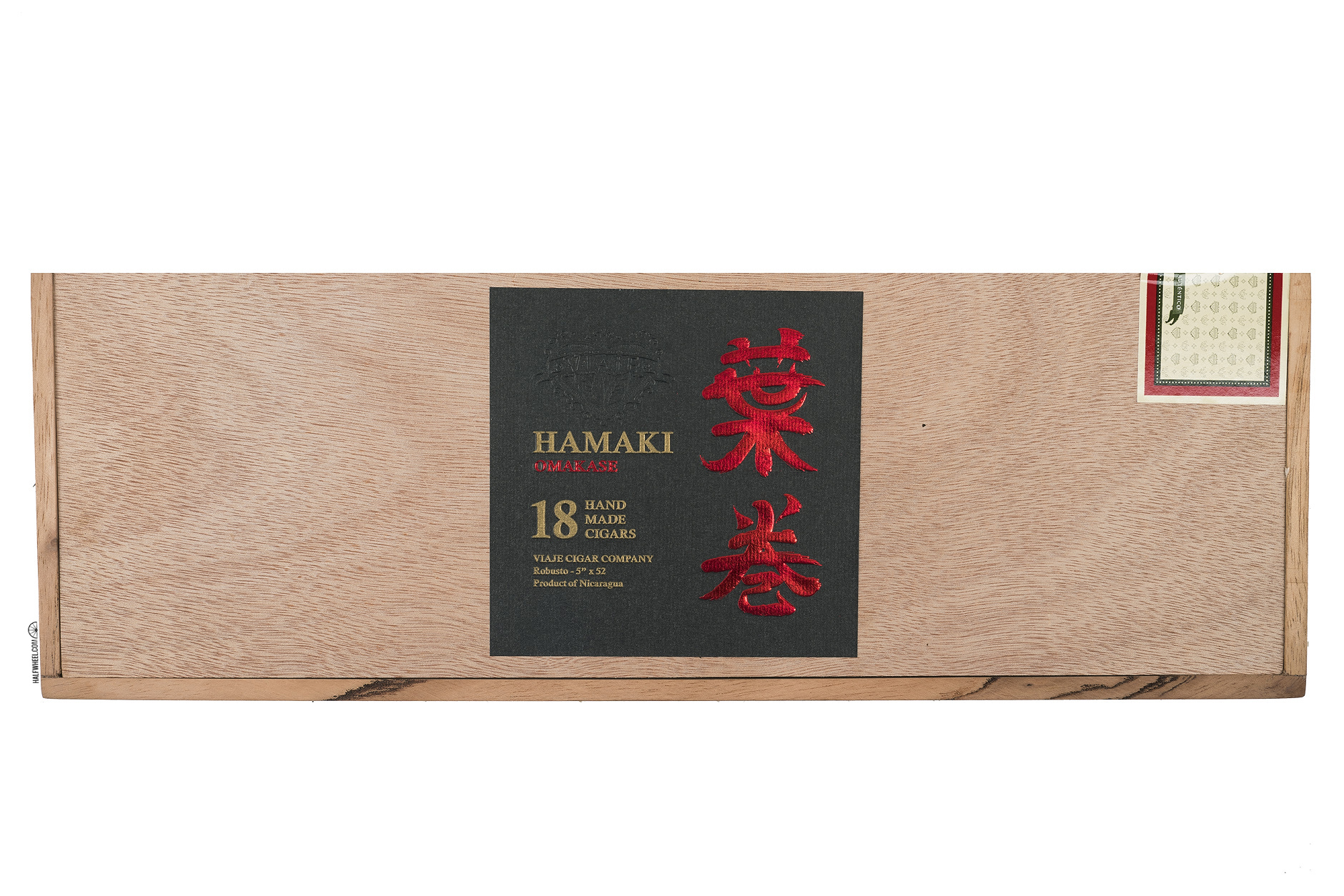 In addition, Viaje graduated the Hamakai out of the White Label Project Series, meaning the cigars are now packaged with distinctive and more creative bands and boxes. 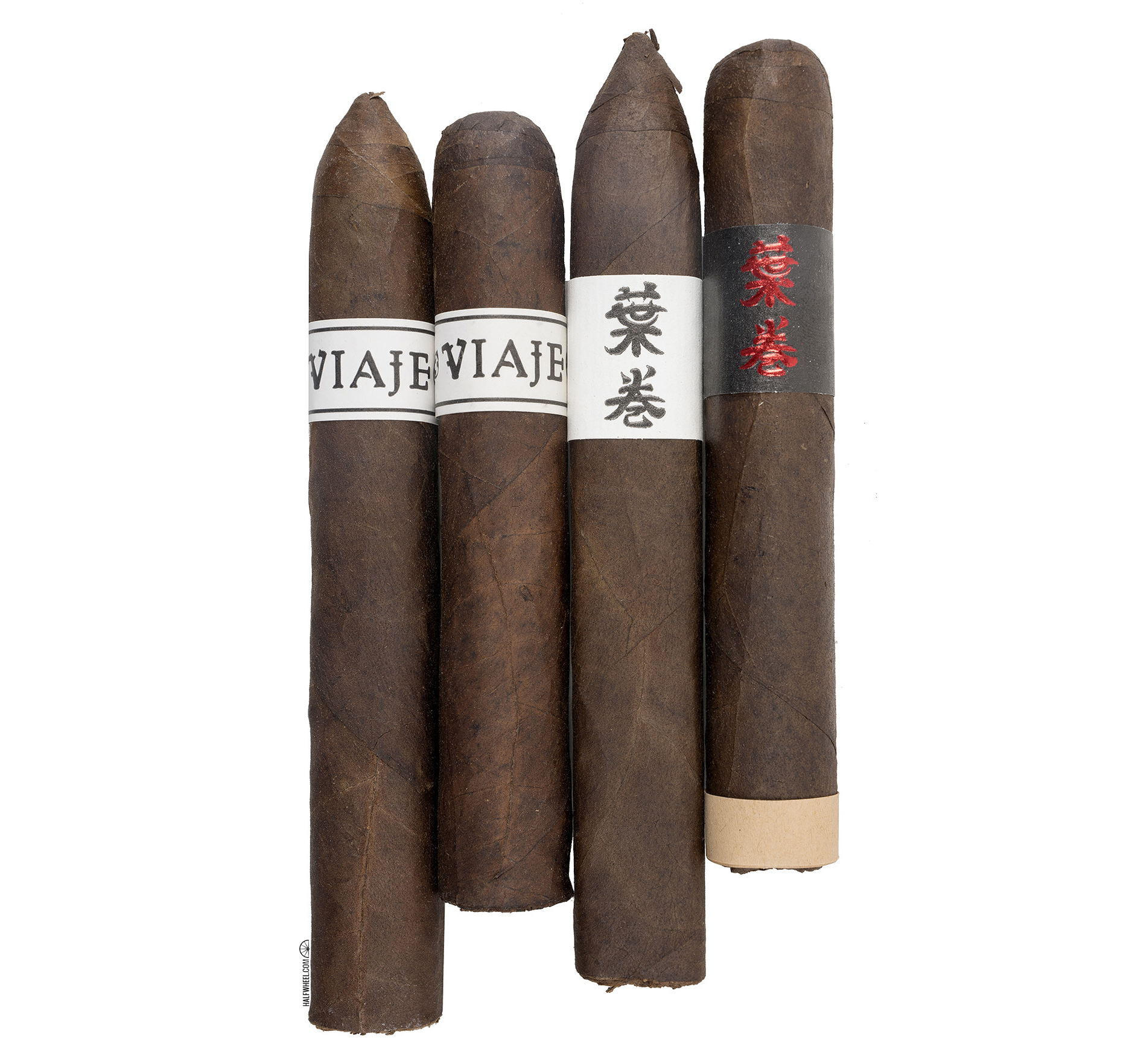 The first thing I notice when I pick up the Viaje Hamaki Omakase is the metallic red logo that visually jumps off the band attached to a dark-as-night espresso brown wrapper. Speaking of the wrapper leaf, it is so oily it looks like it was dipped in a vat of oil and is extremely smooth to the touch with just a bit of give when squeezed and the closed foot is a nice touch. Aroma from the wrapper is a combination of creamy cedar, hay, manure, sweet leather and corn chips while the cold draw brings flavors of strong leather tack, sweet hay, black pepper, dark bitter chocolate, gritty earth and rich raisin sweetness.

The first third of the Viaje Hamaki Omakase features a dominant combination of strong hay and leather combination that is pulled directly from the cold draw, followed closely by notes of creamy cedar, oak, floral and dark chocolate, along with a slight vanilla bean sweetness on the finish. There is a slight amount of spice on my tongue as well as some noticeable black pepper on the retrohale, but both already seem to be decreasing in strength as the first third continues. In terms of combustion, the smoke production is both thick and copious flowing from the foot, the draw is excellent and the burn gives me no issues whatsoever. Strength-wise, the Viaje starts off fairly mild but increases enough to sniff the medium mark as the first third ends. While dominant flavors continue to be a combination of strong hay and leather, the second third of the Omakase adds a couple of new flavors, most notably espresso beans and dried tea leaves. There are also the familiar notes of dark chocolate, oak and floral that flit in and out while the vanilla bean sweetness remains noticeable and both the black pepper on the retrohale and spice on my tongue have all but disappeared. The smoke production remains well above average while the draw continues along its excellent path, and although the burn has become a bit wavy, it is far from needing a touchup at this point. In terms of strength, the Hamaki Omakase has stalled just short of the medium mark and is seemingly content to remain there for the foreseeable future. Unfortunately, the profile does not change much in the final third of the Viaje Hamaki Omakase, with the strong hay and leather combination continuing to dominate the profile while lesser flavors of oak, bitter chocolate, espresso, floral and very slight tea leaves bring up the rear. The vanilla sweetness has bumped up a small notch and the black pepper on the retrohale has increased a bit as well, but the spice from the first third never returns. Construction-wise, the draw gives me no issues at all and the burn has evened up nicely, while the smoke production remains quite high off of the foot and the overall strength ends up just shy of the medium mark by the time I put the nub down with about an inch left. As a total experience, the Viaje Hamaki Omakase (2019) hit a number of great points I look for in a release: it is visually appealing, it is a joy to smoke in terms of construction as well as balance and it has an extremely interesting interactive element included. Unfortunately, the one thing it is lacking is one of the most important: there is almost no complexity in the blend, as the main flavors in the very first puffs turned out to be pretty much the exact same flavors that dominated the profile until the final puffs. Whether the former points are enough to overcome, the latter issue is a personal decision—and the final score takes very few of those points into account—but I can tell you although it is far from the most complex cigar I have smoked all year, the other positive notes went a long way to making up for that detriment.