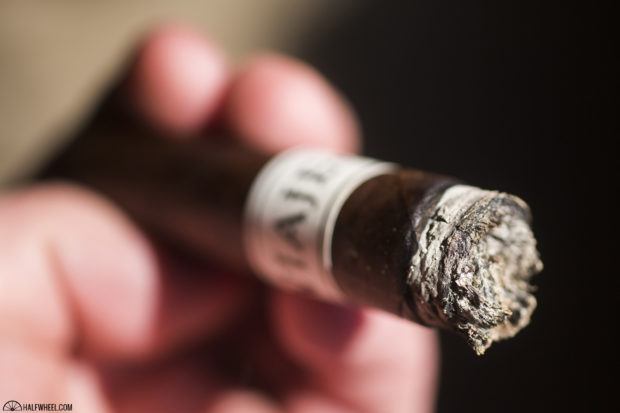 While Tatuaje’s Monster Series has become arguably the best known Halloween cigar release in recent years, there have been other cigars released around the holiday as well, including Asylum Cigars’ Devil’s Night, Tatuaje;s own Halloween cigar and CAO’s Rider’s Revenge.

While Viaje has released a Halloween cigar before—the Full Moon—the most recent entry for the holiday is the GP 10.31, a 4 7/8 x 50 perfecto made entirely of Nicaraguan tobacco with a “dark” corojo wrapper. While the new blend seems to be a sequel to Viaje’s other two food themed releases like the Jalapeño and Ghost Pepper, this cigar has specially been marketed for the Halloween holiday.

“Keeping with the Halloween tradition, a special edition GHOST PEPPER will be shipped to all authorized Viaje retailers,” reads a post on Viaje’s Instagram page. “The cigar features a new blend and very spooky packaging.”

The Viaje GP 10.31 retails for $8.80 packaged in boxes of 25, and has a total production of 300 boxes. In addition, a spokesperson of the company told halfwheel that the red foil-wrapped Ghost Pepper “will no longer be made.”

This is the third Viaje release with a pepper theme. 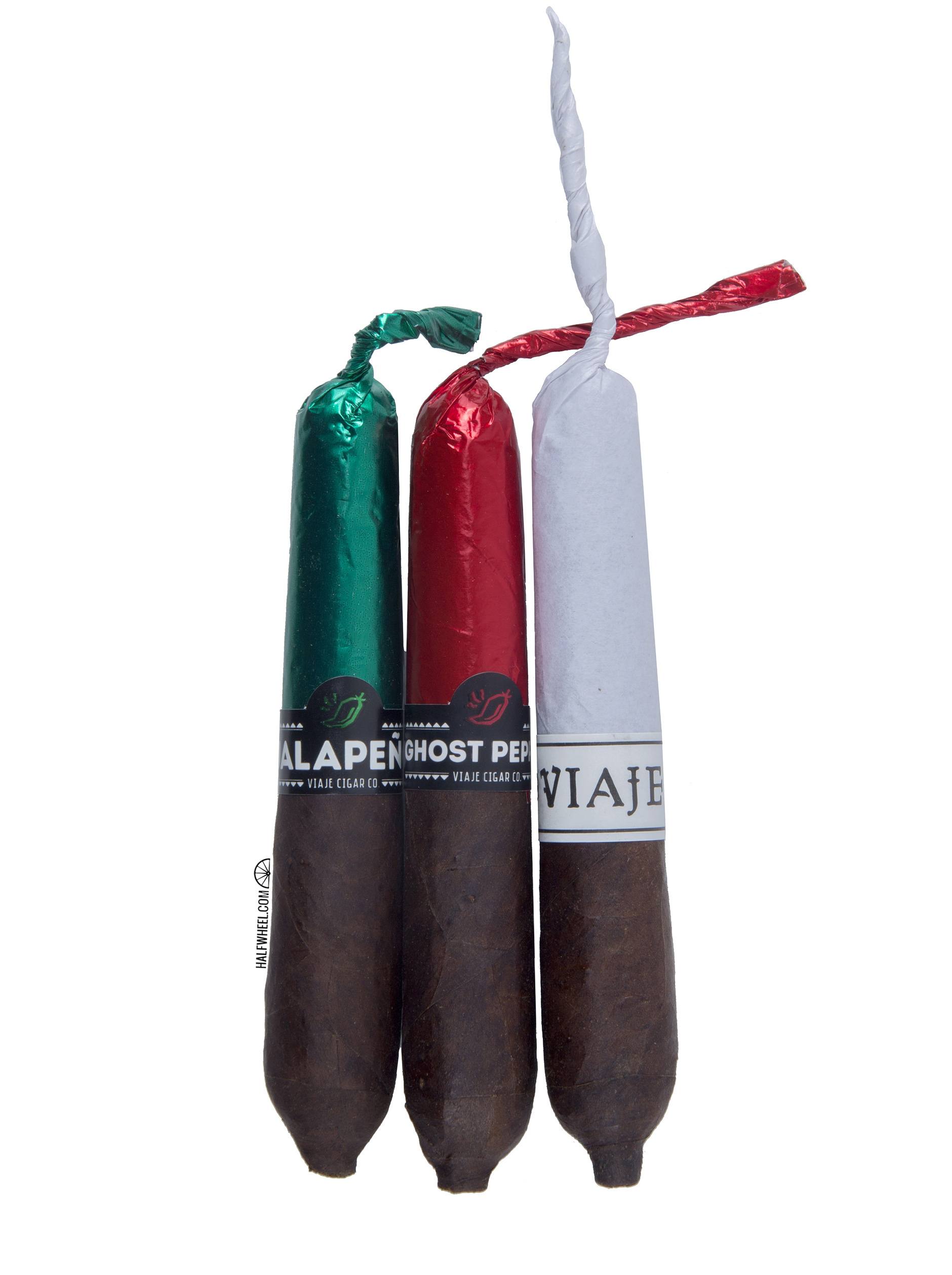 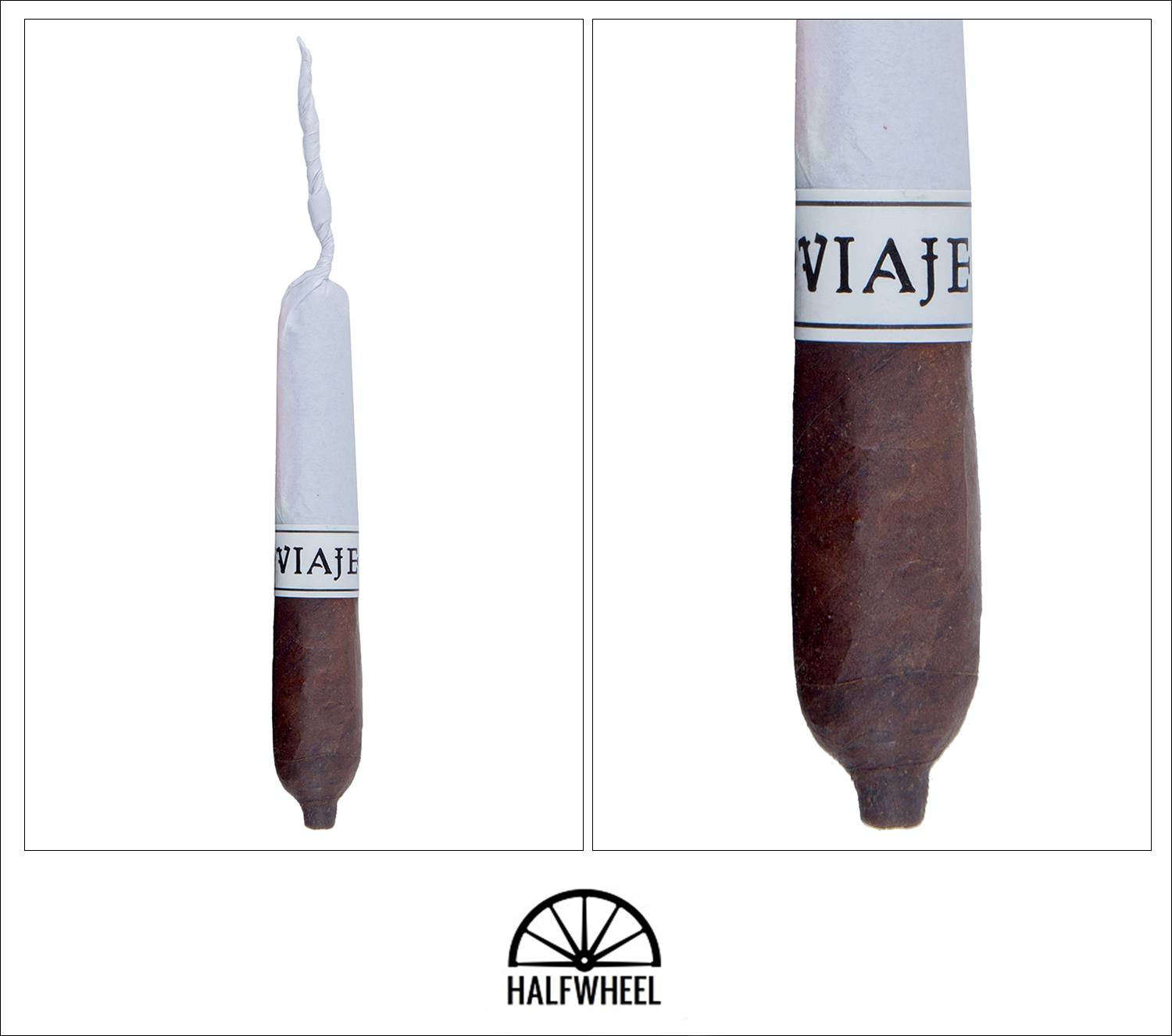 The Viaje GP 10.31 looks like it was literally dipped in oil before being packaged, with a dark espresso brown wrapper that is slick to the touch. Once I remove the white paper wrap that covers the back half of the cigar, there are a few veins visible running down the length. Aroma from the wrapper is a combination of earth, peanuts, manure and oak, while the cold draw brings flavors of creamy cedar, nuts, hay, black pepper and strong cherry sweetness.

Starting out the first third of the Viaje GP 10.31, there is a dominant flavor of freshly brewed espresso sprinkled with other notes of creamy cedar, earth, hay, leather, cream and toast. However, an aggressive black pepper note quickly becomes apparent on the retrohale, along with a slight—very slight—cherry sweetness, but there is no spice to be had at all. Construction-wise, the draw is excellent so far, and the burn is quite good, although I have to touch it up once to keep it from running away. The overall strength is just not an issue so far and ends the first third well below the medium mark. 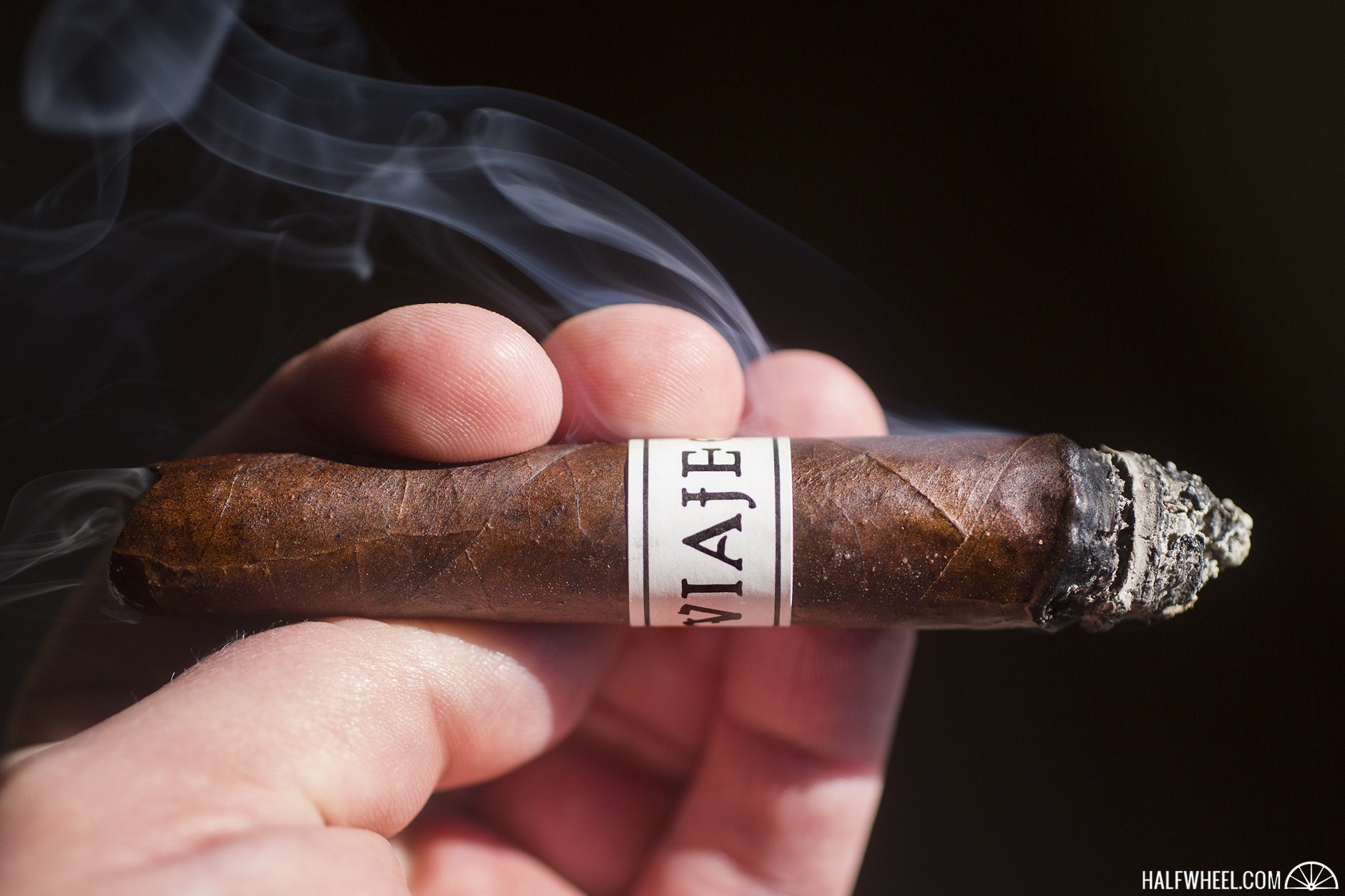 Thankfully, the black pepper on the retrohale gives a little ground in the second third of the Viaje GP 10.31, although it is still a very dominant note in the profile. Other flavors of creamy cedar earth, leather, cocoa nibs, hay and slight meaty steak flit in and out, and I actually pick up a touch of salt on my lips just after the halfway point. In terms of construction, the draw continues to impress and the burn has evened up nicely, not needing a touch-up for the entire second third. Strength-wise, the Viaje GP 10.31 continues to struggle to hit the medium mark, but comes very close before the start of the final third. 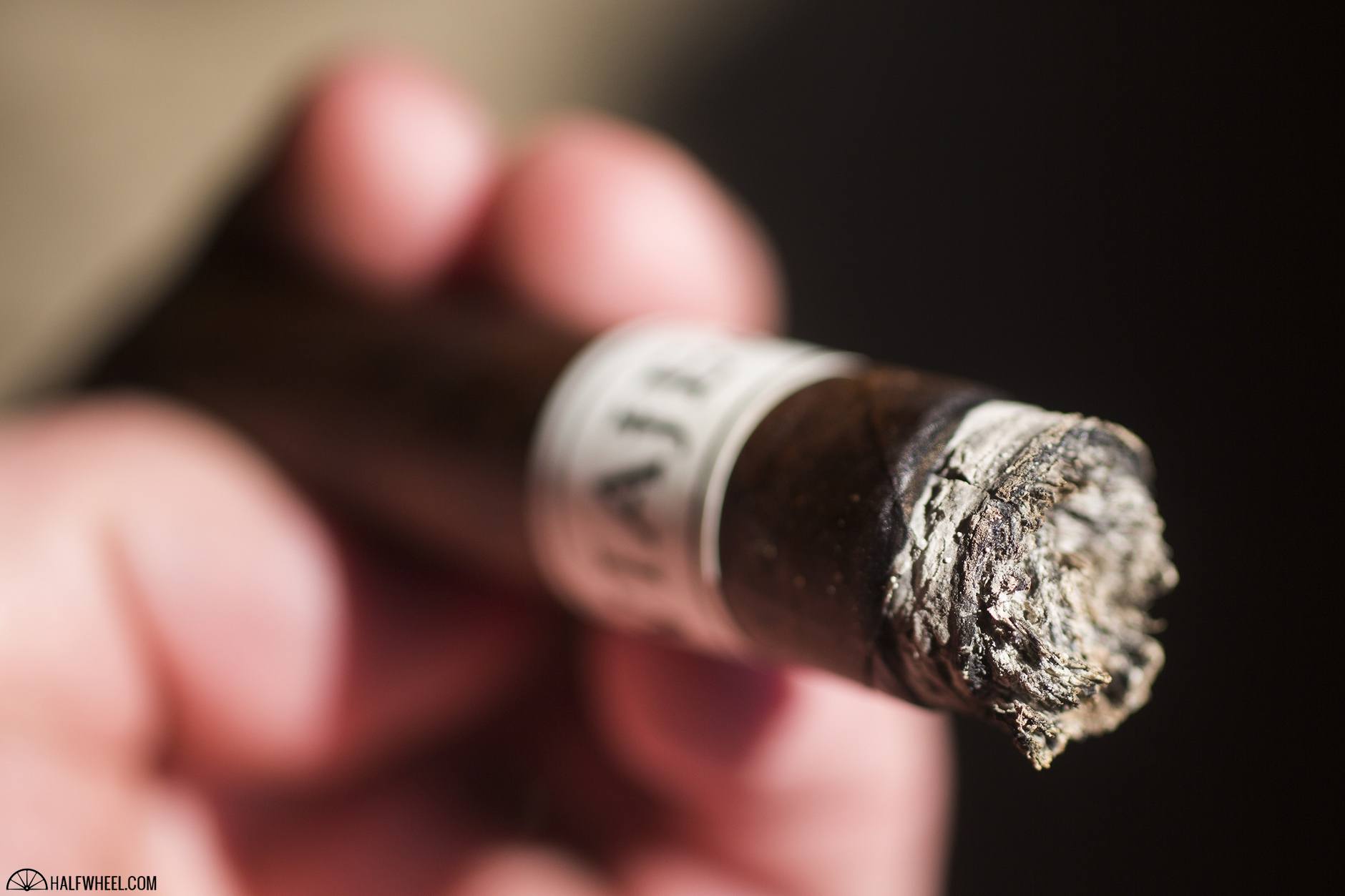 Unfortunately, both the espresso note and cherry sweetness in the profile of Viaje GP 10.31 are finally overwhelmed by the black pepper on the retrohale in the final third. The other flavors in the profile remain similar to the second third: leather, hay, cocoa nibs and lactose along with salty note from the second third that comes and goes. Both the burn and draw are excellent until the end of the cigar and the strength does finally reach the medium mark by the time I put the nub down with about an inch left. 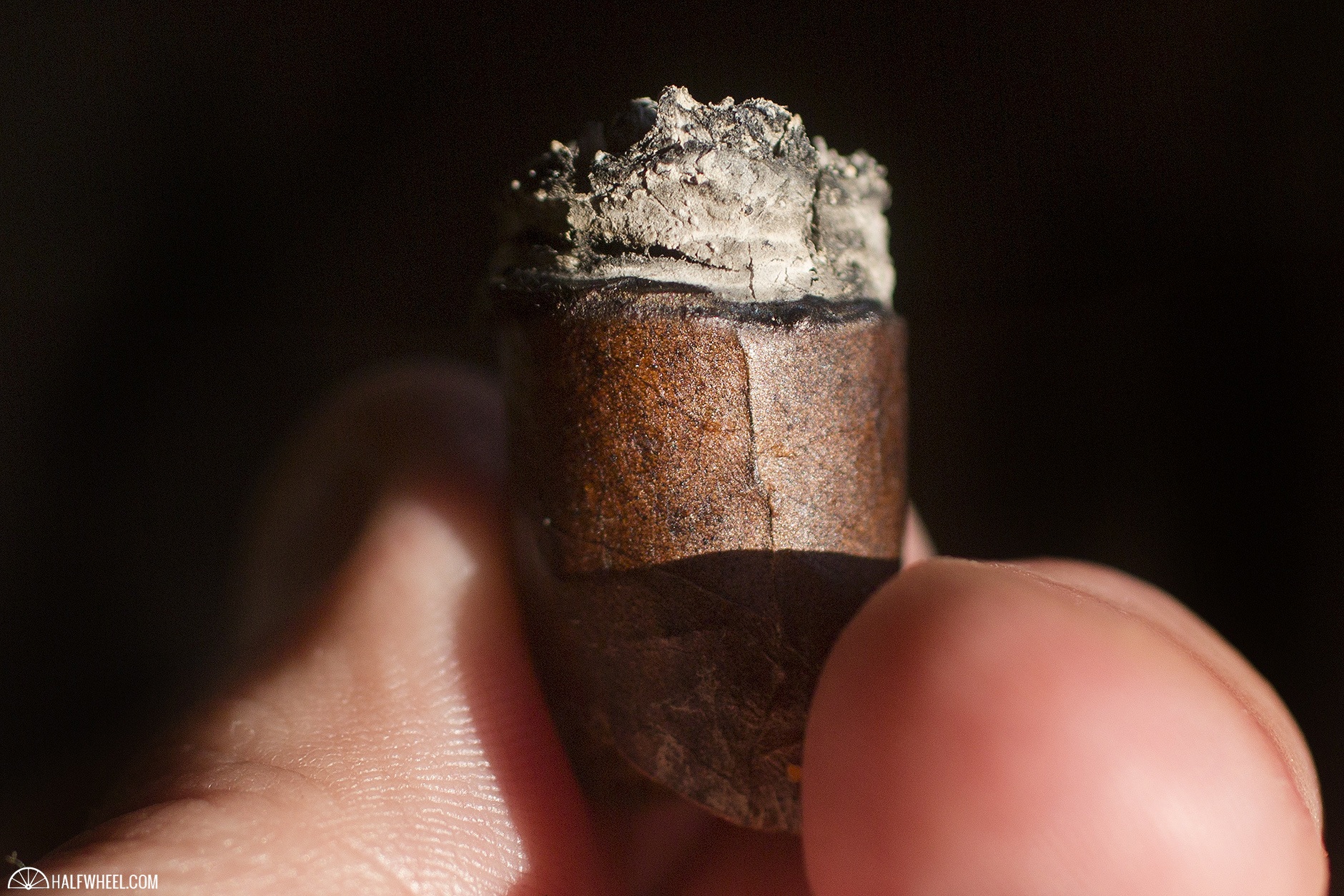 Do you like black pepper on everything you eat? Then this is the cigar for you. The Viaje GP 10.31 is full of it, to the point where it overwhelms the profile at points, especially in the final third. There are other flavors in the blend—most notably a slight cherry sweetness, creamy cedar and bitter espresso—but they are never able to get enough of a foothold to really change the overall profile. Both the burn and draw are better than decent, and while the strength does increase noticeably in the final third, it is well-balanced for most of the cigar. There is no doubt that Viaje has impressed me with some if its recent releases, but the Viaje GP 10.31 is just not on par with those.