For the 2017 release of its Halloween-themed cigar, Viaje seemed to be keeping it simple: a single, 5 x 58 vitola, much the same as has been released every year, though with updated boxes that the company called more streamlined and decorated.

Then the Edición Limitada version started showing up at a handful of stores.

As has been done before, Viaje will occasionally release an Edición Limitada version of one of its lines, which according to a company spokesperson could mean one of a few things. While it usually means a smaller production, it can also be used to signify a different wrapper or tweaked blend.

This is a contrast to the Collector’s Version of a cigar that appears on occasion, which is a new size in the line that will only appear once, for example the 6 x 56 toro version of the Full Moon that was released in 2016.

In this case, several of the details between the regular Full Moon and its Edición Limitada version are the same: both are 5 x 58, both are made at Raíces Cubanas in Honduras and both use Nicaraguan tobacco for the binder and filler.

One of the key differences is the wrapper; for the Edición Limitada, a Mexican San Andrés leaf is used in place of the Nicaraguan corojo leaf found on the original. When the first Full Moon Edición Limitada was released in 2015, a company spokesperson told halfwheel that “Andre rolled a few (Full Moons) using San Andres for himself last year. He’s constantly experimenting. He loved the blend so he released a few to 5 undisclosed retailers this year.”

With the two cigars for 2017, the Viaje Full Moon line now sits at seven releases. 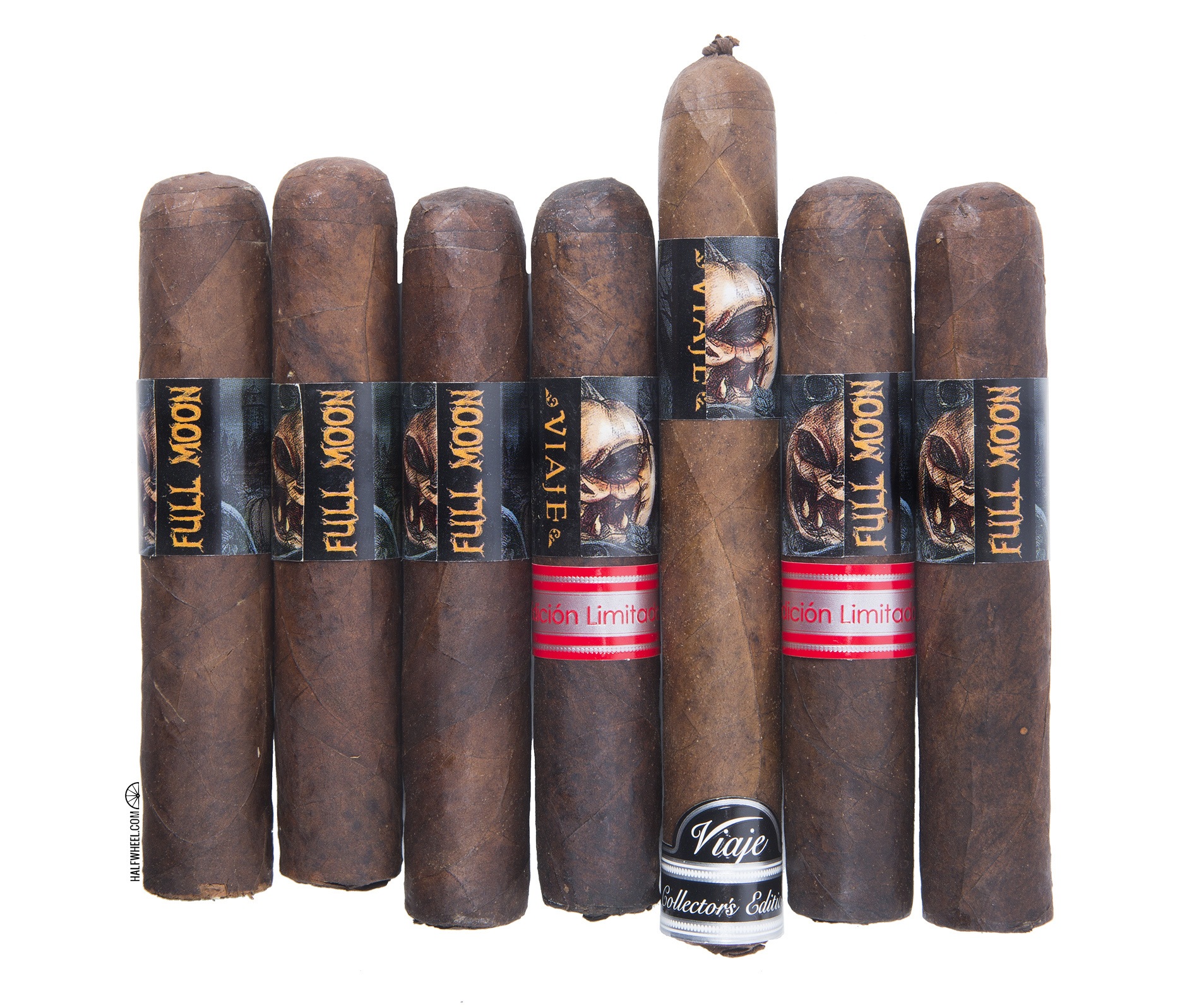 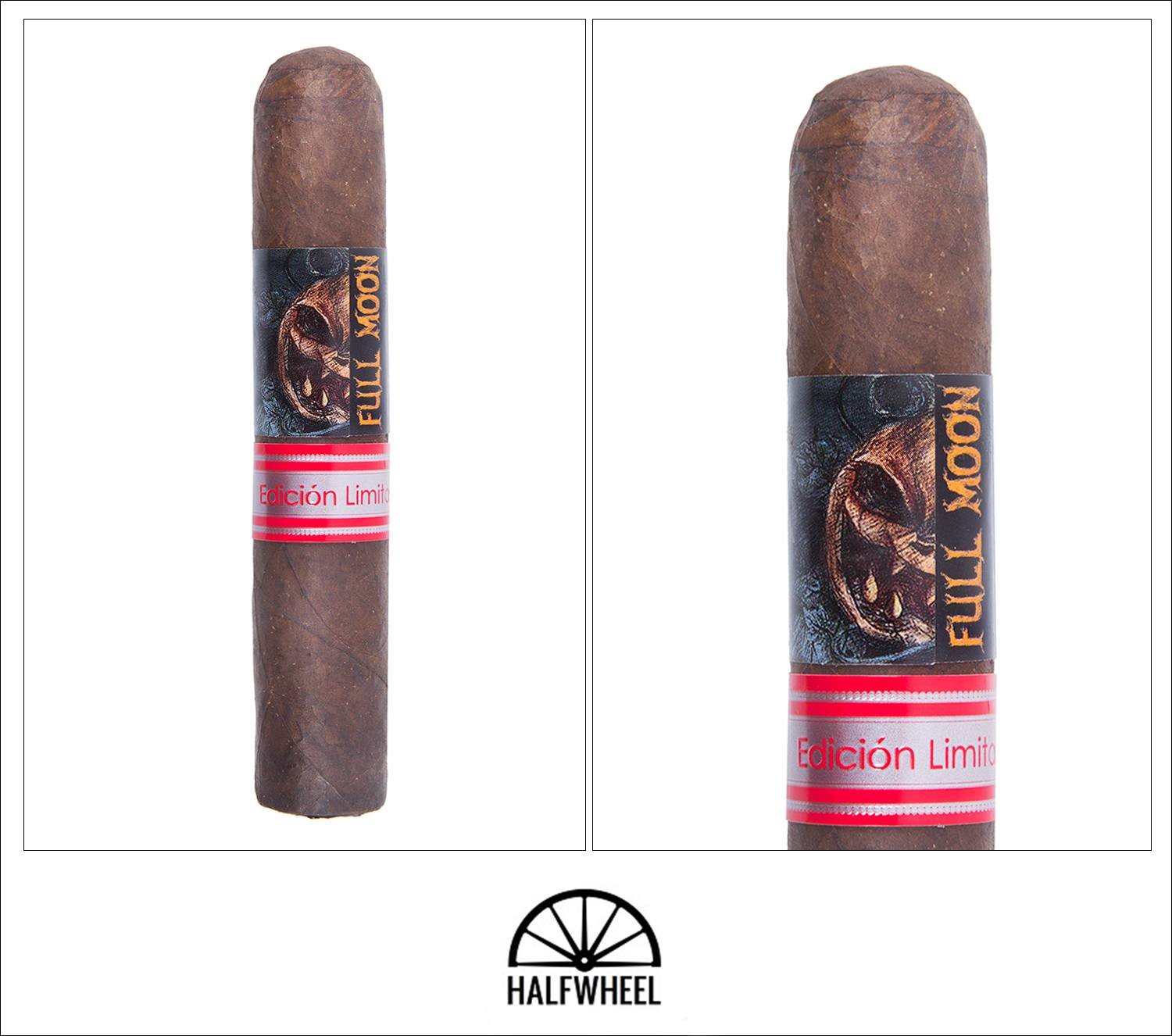 The Viaje Full Moon 2017 Edición Limitada is a thick, stout cigar covered in an incredibly dark brown wrapper with spots where tooth seems to almost jump off the leaf. One sample is noticeably different than the others, with several lighter spots that elicit thoughts of bricks and clay by their color. There are a few spots that appear to be water marks or a similar blemish, but they are generally so minor as to not be distracting. It’s generally a quite firm roll with little in the way of give, though the clay-colored sample was a bit less firm; the seams are flat, the foot covered tidily, and the caps applied quite well, almost invisibly on some samples. The covered foot obscures most of the filler’s aromas, but I get a bit of sweet earthiness, highlighted by grape jelly and a bit of wheat bread toast. There’s a little bit of pepper to be found, but it’s buried pretty deep and doesn’t jump off the tobacco. Even with the covered foot, the cold draw on the first sample is quite open with little resistance to air movement. It’s a contrast to the aroma, as there is little in the way of earth nor sweetness, but rather more of the wheat, a bit of pepper, and faint firewood.

Even though the cold draw suggested the Viaje Full Moon 2017 Edición Limitada might be loose, once lit the cigar burns and draws near perfectly. The flavor has some chalk-forward earthiness out of the gate, with white pepper competing for the front half of the tongue trending into black pepper that elicits more of a whole-mouth feel. I’m not sure if the blend is showing restraint or is a bit less full than I anticipated, but it’s a medium to medium-plus start that allows some of the underlying notes to emerge well, including some chocolate chips, before the first inch has burned. The burn line does well through the first inch before beginning to get a bit jagged, though I’m content to see how it fares before reaching for the lighter. The flavors are still on the subdued side, offering a bit of earth, chalk, pepper, and sweetness, steadily intensifying and bringing a bit of harshness to the throat as the secondary band needs to come off, which in turn knocks the first clump of ash off. 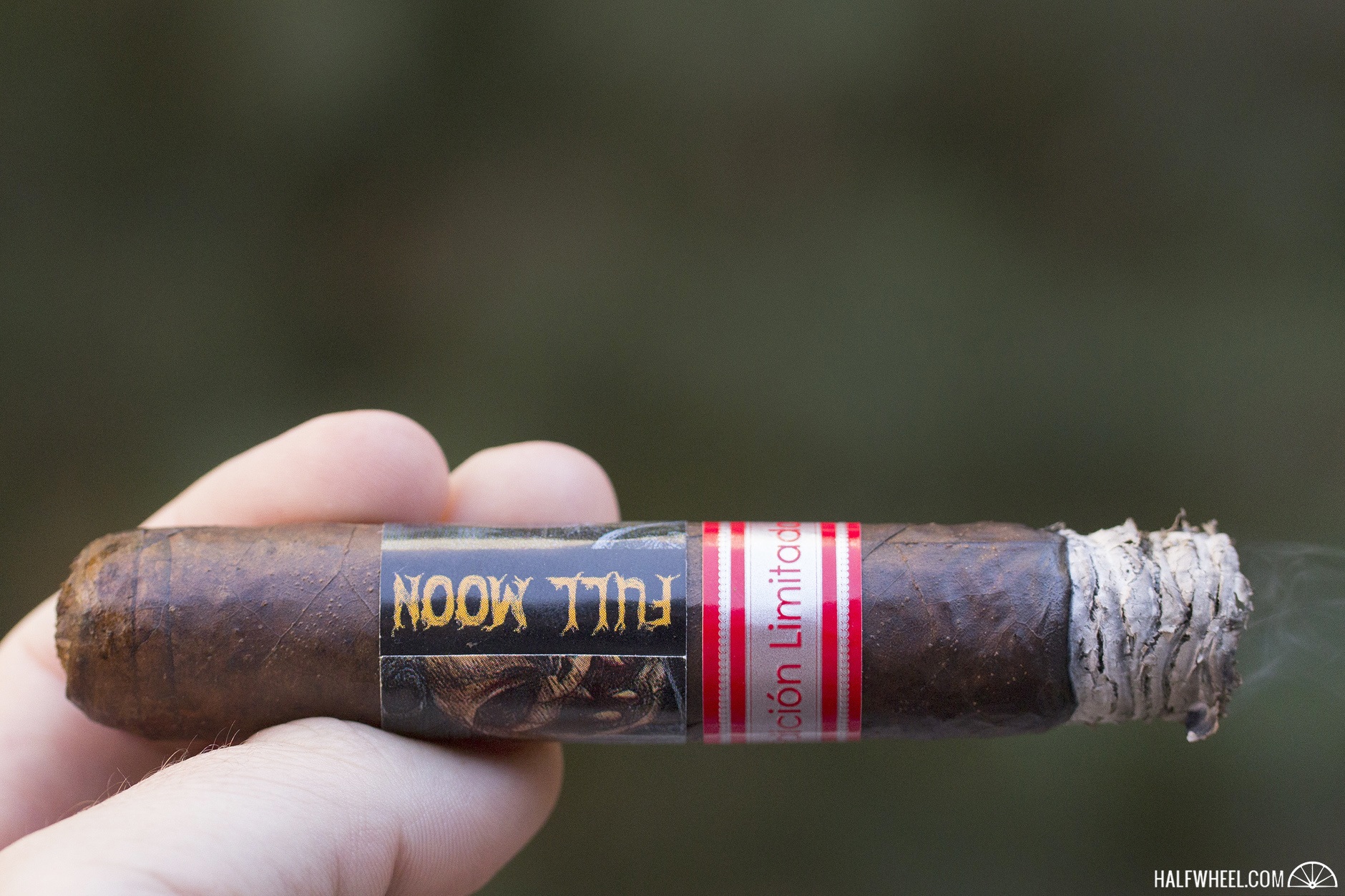 The second third of the Full Moon 2017 EL gets underway with a uptick in the amount of harshness to the throat as the earthiness is showing its rougher edges. It’s surprisingly forward in one sample and noticeable yet manageable in the other, both occurring soon after the first clump of ash falls off. There’s an interesting meatiness to the aroma as I get whiffs of a steakhouse kitchen with meats in various stages of being cooked; it’s complex and hard to pin down, other than to accept and enjoy it for its complexity. Pepper through the nose gets a bit more pointed approaching the midpoint, though it is manageable and far from overbearing. Clay and earth drive the cigar across its midpoint with a slightly drier profile, and the tingling finish on the tongue is quite long. The draw continues to be quite good, firming up just a bit since the start, while the burn line and smoke production are both more than satisfactory. The flavors mellow just a bit in the final puffs of this section, though the clay stays fairly vibrant. 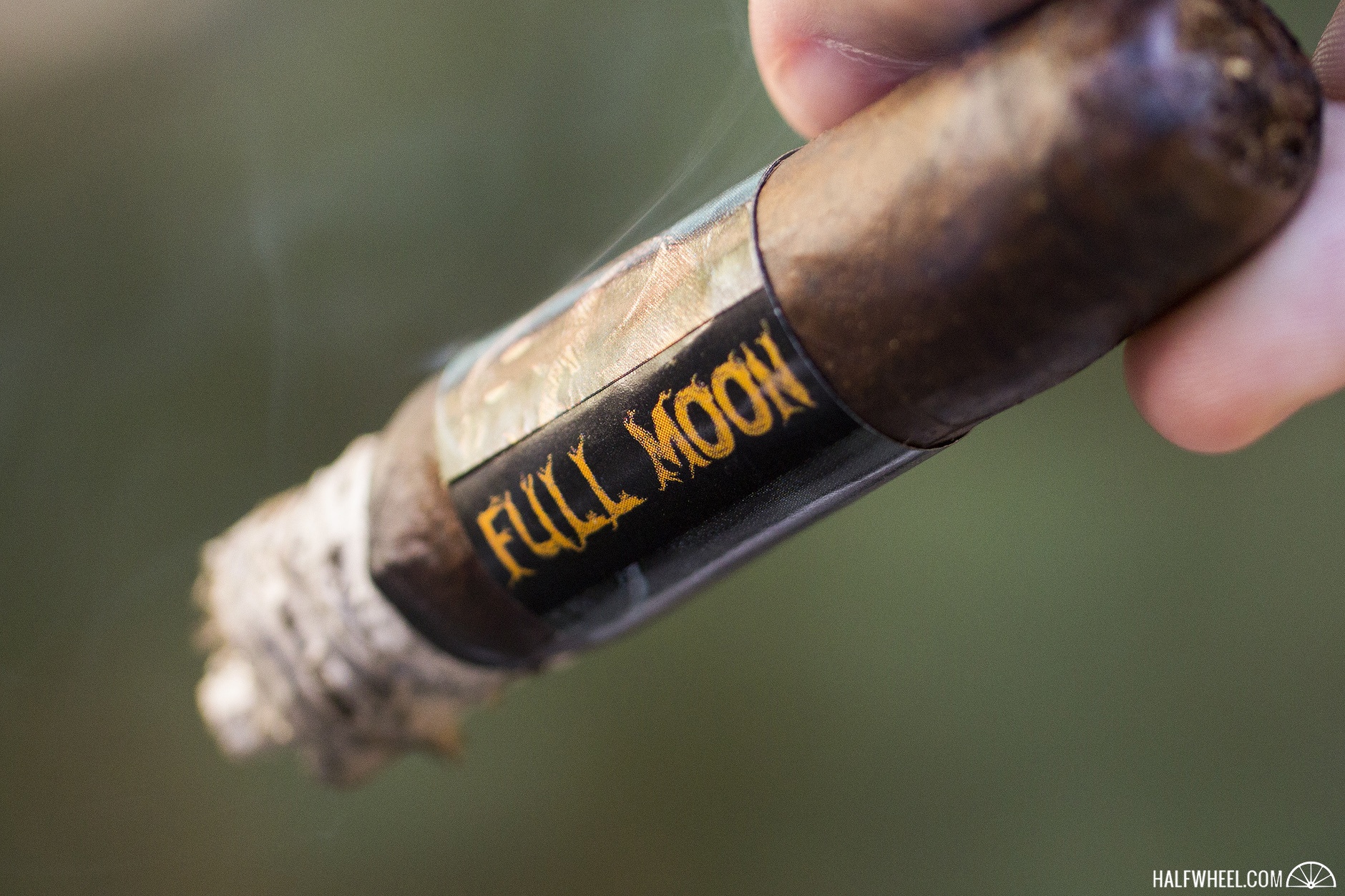 The start of the final third sees the earth continue to clean itself up, though when it shows its rockier edges, it may be too much for some palates, and at times flirts with the limits of mine. I’m surprised that I haven’t picked up more sweetness from the San Andrés maduro wrapper, though it’s not lacking for other notes of the region’s terroir. Black pepper gets back in the fray before long as the Viaje Full Moon Edición Limitada 2017 navigates the space between medium-full and full bodied, with the long finish continuing to do its thing on my tongue. The cigar begins its final inch with a meatiness picking up in both the texture and taste of the smoke; while it’s been thick to this point it now seems to be even more so, with freshly grilled steak leading the flavor. A bit of floral sweetness adds to the aroma, and brings the cigar to its highest point yet before needing retirement to the ashtray, closing with a slightly uneven burn line but otherwise very good smoke production and air flow. 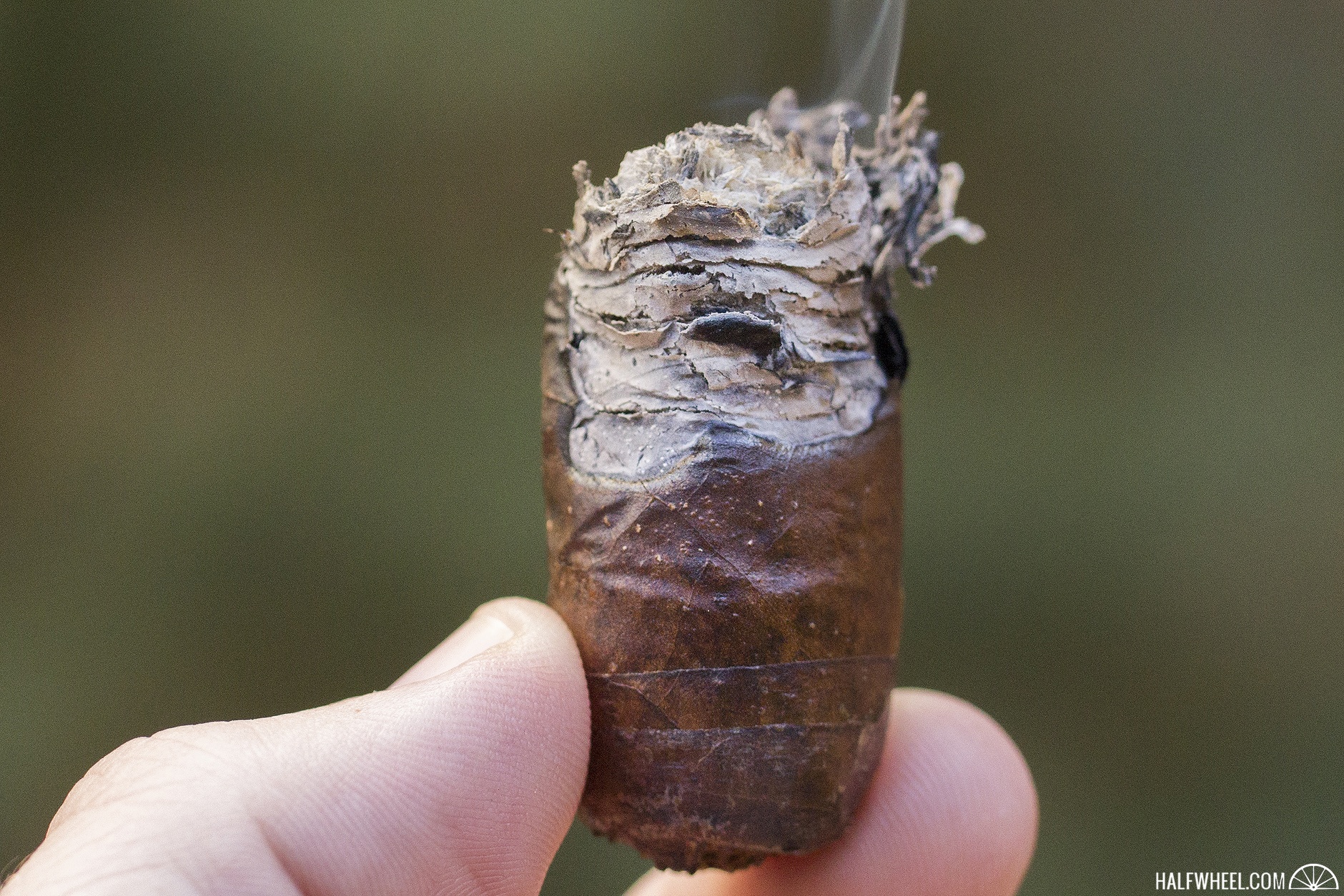 For a cigar that has some rough edges to its flavor profile, I found myself still liking the Viaje Full Moon Edición Limitada 2017 quite a bit, at least in certain spots. The meatiness and clay-laden earth are highlights for my palate, and the fairly tempered use of black pepper throughout was appreciated. I would have loved a bit more sweetness from the cigar, there are spots where the balance could have been a bit better, and the burn line had its share of struggles, but I'd score those as fairly minor issues in the grand scheme of things. My hope is that the cigar will soon turn a corner in the near future where the rougher spots will smooth over and the flavors will do an even better and more thorough job of coming together; if and when that happens, the Viaje Full Moon Edición Limitada 2017 could well end up being a very good cigar.