Last month, Viaje Cigars announced information on a new series that will be released annually staring in 2014. Named the Viaje Collaboration, the basic idea is to work with a different company in the cigar industry to produce a special cigar each year. It’s a series that would mimic much of what has gone in the craft beer world, where breweries often work together to create a single beer. Viaje owner Andre Farkas told halfwheel that his plan for Viaje Collaboration could extend beyond simply partnering with different manufacturers, but might also include retailers.

For its first release, Viaje chose Casa Fernández. It was not a particularly surprising one given Casa Fernández shares ownership with AGANORSA, the Nicaraguan growing operation who has provided much of the tobacco used in Viaje over the years. The Viaje Collaboration 2014 is a 6 x 52 toro with a slight box-press and a covered foot. It uses a Nicaraguan corojo 99 wrapper and is being sold in boxes of 20 with a retail price of 11.50. Only 1,000 boxes were made, and it shipped with Cache and Satori. It is made at the TABSA factory in Estelí, Nicaragua, which also shares ownership with Casa Fernández and AGANORSA. The wrapper on the Viaje Collaboration 2014 is a light nut brown and smooth as silk with almost no veins or oil visible at all. Aroma from the wrapper is strong oak, leather, sweet barnyard and lemon, while the cold draw brings flavors of creamy oak, nuts and coffee.

The first third of the Viaje starts out with some significant spice on the lips and tongue, along with dominant flavors of creamy oak, leather, peanuts and dark slightly bitter cocoa, along with just a touch of generic sweetness that seems to be getting stronger as the first third continues. The smoke production is massive right off the the front, and the strength starts out in-between mild and medium, although it does not seem to be going anywhere very fast. The burn is a bit wavy at first, but gives me no major problems and the draw is excellent with just the right amount of resistance for me. Coming into the second third of the Viaje Collaboration 2014, the dominant flavor in the profile remains a very creamy oak note, interspersed with nuts, espresso, earth and bitter cocoa. There is still some pepper noticeable on the retrohale, but the spice from the first third is long gone by this point. The sweetness has punched up a bit, but is still fairly indeterminate at the moment, while the smoke production continues to be almost overwhelming. Construction-wise, the burn has evened out nicely, while the draw remains excellent, and the strength has increased a bit, and ends the second third just under the medium mark. 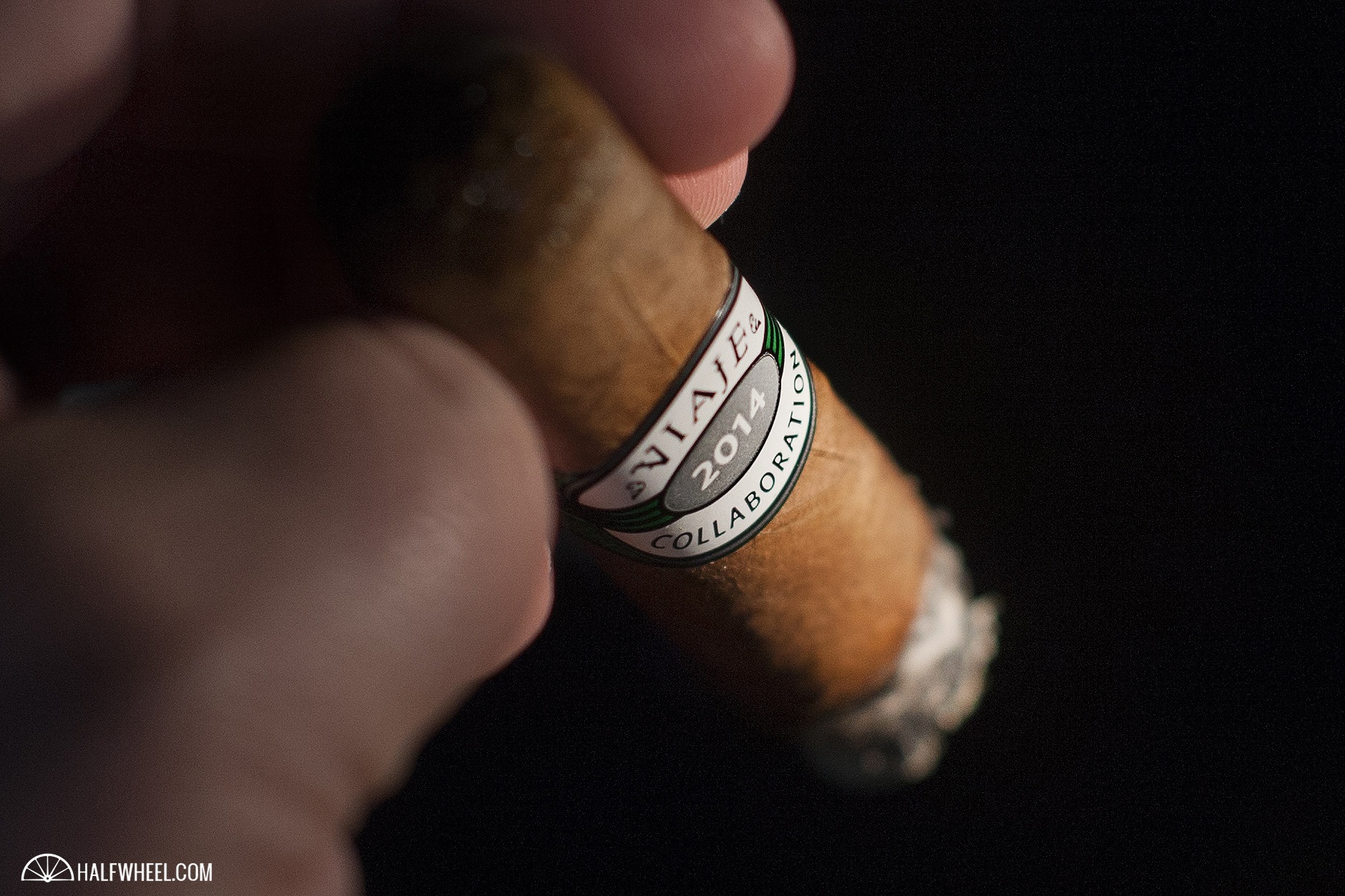 The profile does not change much during the final third, with the same creamy oak note easily beating out the rest of the flavors of espresso, nuts, leather, cocoa and earth. The pepper on the retrohale is still present, but has decreased noticeably from the high around the halfway point, and the spice on the tongue has never returned. The sweetness in the profile is noticeable, but still has never gotten strong enough to be able to identify specific flavors. Both the draw and burn continue to impress, as does the smoke production, which has not let up in the least for the entire cigar. The overall strength does manage to hit the medium mark by the end of the cigar, albeit just barely, and I am able to smoke the nub down to less than an inch without a problem. I was very interested when I heard about this collaboration, as Casa Fernández has quite a bit of great tobacco at their disposal. The Viaje Collaboration 2014 smokes well, and the profile has an enjoyable creamy oak base to it, but features almost no transitions at all and a hint of sweetness that never really develops. The construction was excellent overall, and it is a very easy smoking cigar, but just not very complex.