In 2016, Viaje chose the InterTabac trade show to introduce a brand new line named Circa ’45, a European exclusive that was released to some U.S. stores a year later. The company then released a new version named Circa ’45 Maduro in December 2017 before updating the packaging for another U.S. release of the original Circa ’45 in March 2020.

This January, Viaje announced a new three-vitola line dubbed Circa ’45 Reserva, incorporating a Mexican San Andrés wrapper instead of the Nicaraguan leaf used in the original blend. Each of the three vitolas was limited to 300 boxes of 25 that began shipping to retailers in February.

When those cigars began shipping, there was actually a fourth size that Viaje hadn’t announced, the Circa ’45 Reserva Edición Limitada. It’s a 7 x 50 Churchill vitola priced at $13.20 per cigar before taxes. In addition to carrying an Edición Limitada secondary—or tertiary—band, the vitola shipped in bundles of 25 instead of boxes. 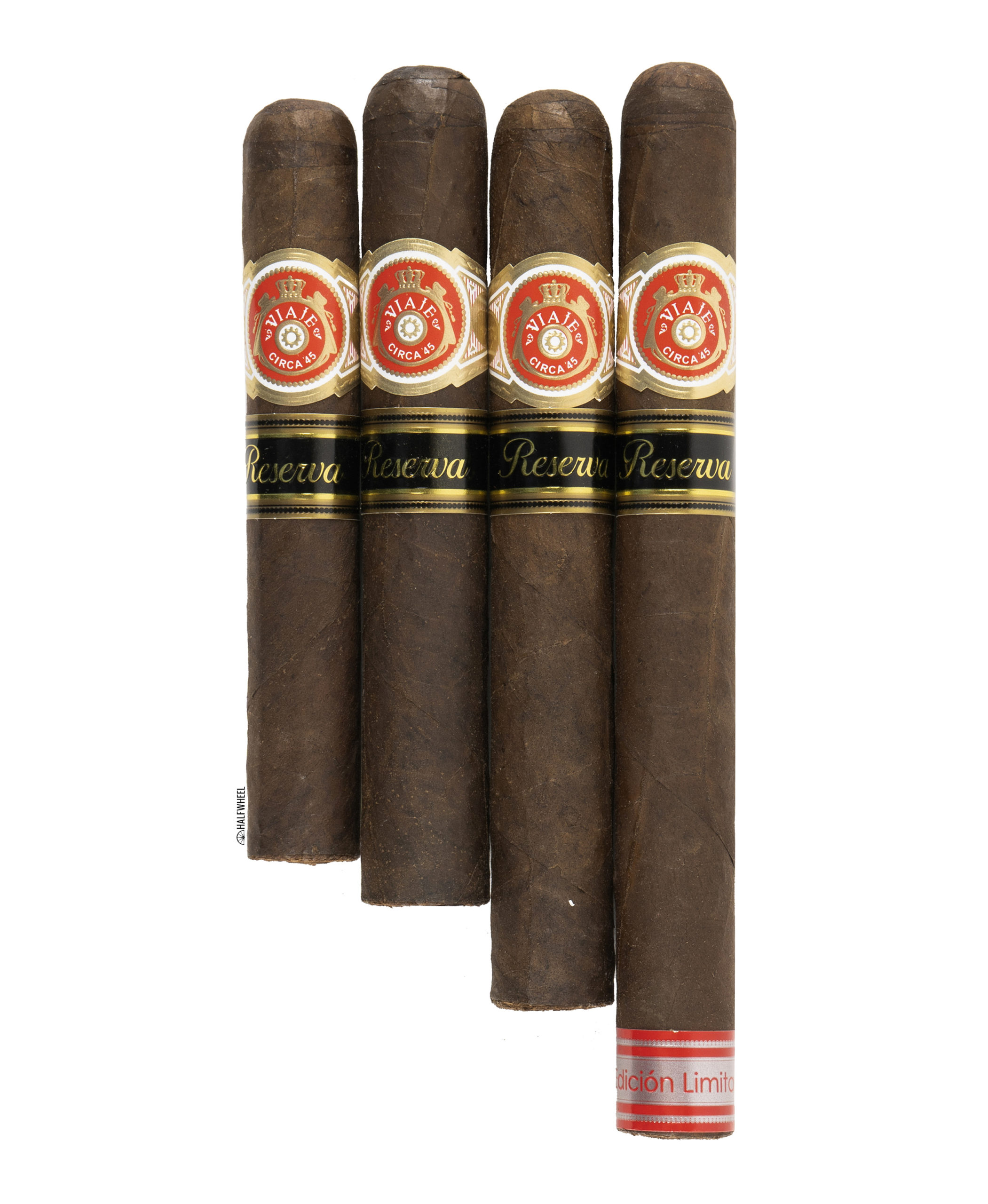 From a visual perspective, the Viaje Circa ’45 Reserva Edición Limitada is covered in a very dark—almost black in certain light—wrapper that has plenty of tooth to spare, although very little obvious oil. There are also a number of veins running up and down the length of the cigar and it is nicely firm when squeezed. Aroma from the wrapper and foot is a combination of cocoa nibs, earth, barnyard, sweet cedar, leather, generic nuts and slight nutmeg, while the cold draw brings flavors of strong dark chocolate, peanut shells, hay, nutmeg, cedar, slight vanilla sweetness and a touch of floral.

If I was expecting a zippy opening I would not get it, as the Circa ’45 Reserva Edición Limitada starts off with plenty of distinct dark chocolate and cedar on the palate, but virtually no spice or pepper that I can discern on either the finish or the retrohale. Lesser notes of earth, espresso beans, barnyard, hay, generic nuts, nutmeg and slight indeterminate citrus flit in and out as well, but there is very little sweetness on the palate or retrohale so far. Construction-wise, the burn starts out a bit wavy, but not bad enough to need correcting as of yet, while the draw is excellent after a simple straight cut. The smoke production is both copious and thick of the foot, while the strength hovers halfway between mild and medium by the end of the first third. There is more of the same during the second third of the Viaje: more dark chocolate and cedar as the main flavors in the profile, more of the same lack of any aggressive spice or pepper and more of the same secondary notes of earth, espresso beans, barnyard, hay, nuts, nutmeg and citrus. Having said that, there are two significant differences to be had as the burn line passes the halfway point: the profile starts to become noticeably creamier in texture, and the sweetness on the retrohale becomes distinct enough to peg it as a simple vanilla bean flavor. Thankfully, both the draw and burn continue to give me no issues. While the strength has increased enough to approach the medium mark by the time the second third comes to an end, it does not seem to be going much further anytime soon. Although the final third of the Circa ’45 Reserva Edición Limitada is not an exact carbon copy of the preceding thirds, there are just not that many major changes to make note of. Dark chocolate and cedar continue to rule the roost in terms of flavor, while the rest of the profile is a hodgepodge of flavors which includes earth, leather, hay, espresso beans, peanuts, barnyard and very light citrus all fighting for space. In addition, there is a bit more vanilla sweetness on the retrohale, but there also continues to be an almost complete lack of either pepper or spice as well. In terms of construction, the draw remains excellent, but the burn finally becomes problematic enough to need one quick correction. The strength barely budges, ending up a bit below the medium mark by the time I put the nub down with a little more than an inch remaining. If you are looking for the familiar—and oftentimes overwhelming—combination of pepper, spice and strength that can be found in a number Viajes, you won’t find it here. In fact, you might want to consider the Circa ’45 Reserva Edición Limitada as sort of a anti-Viaje: where there is normally an abundance of the aforementioned spice, pepper and strength, this blend features a profile with more smoothness and balance than I have tasted in one of the company’s creations in quite some time. Having said that, the profile is fairly linear—dominated at all times by a combination of dark chocolate and cedar—and lacks any sort of noticeable progression. In the end, the Viaje Circa ’45 Reserva Edición Limitada is an enjoyable enough blend, but the typical Viaje smoker may be disappointed by what they find.