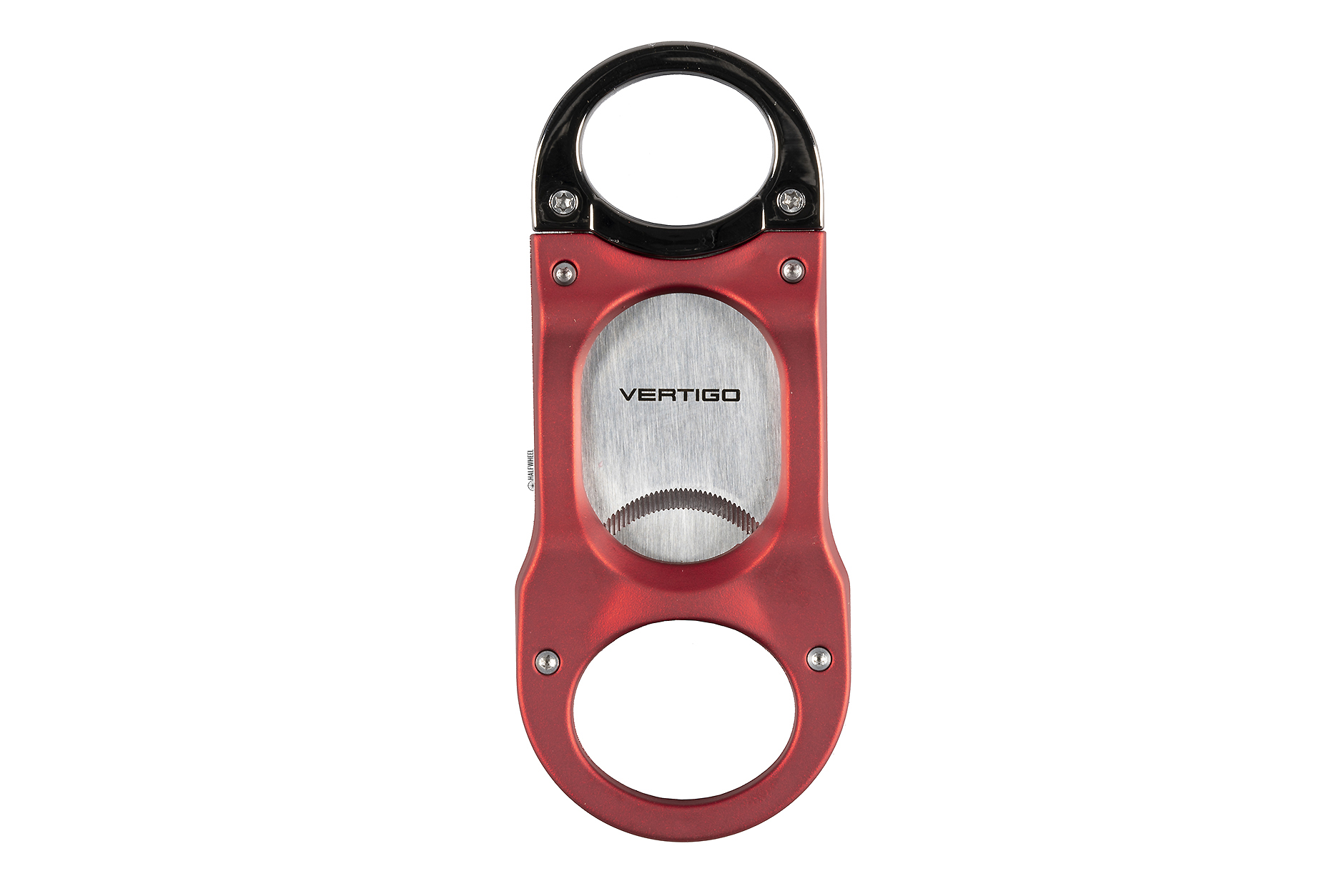 During the 2022 Tobacco Plus Expo (TPE) earlier this year, Lotus Group/Integral Logistics showed off a new cutter under its Vertigo brand called the Shark, a double guillotine cutter enclosed in a metal body—the majority of which has a rubberized finish—that is available in four different colors. What makes it somewhat unique is the detail that gives the Shark its moniker: two serrated stainless steel blades. 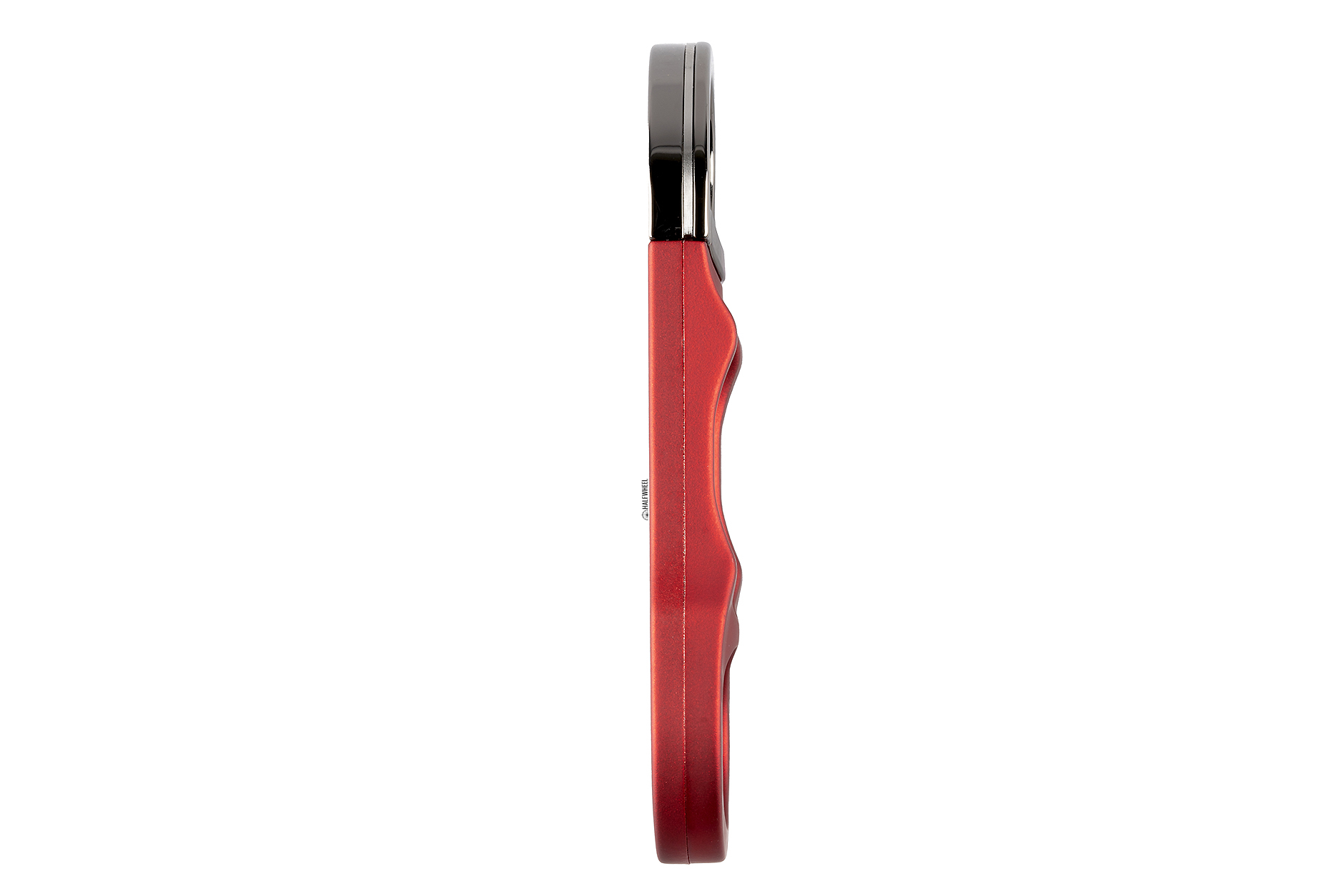 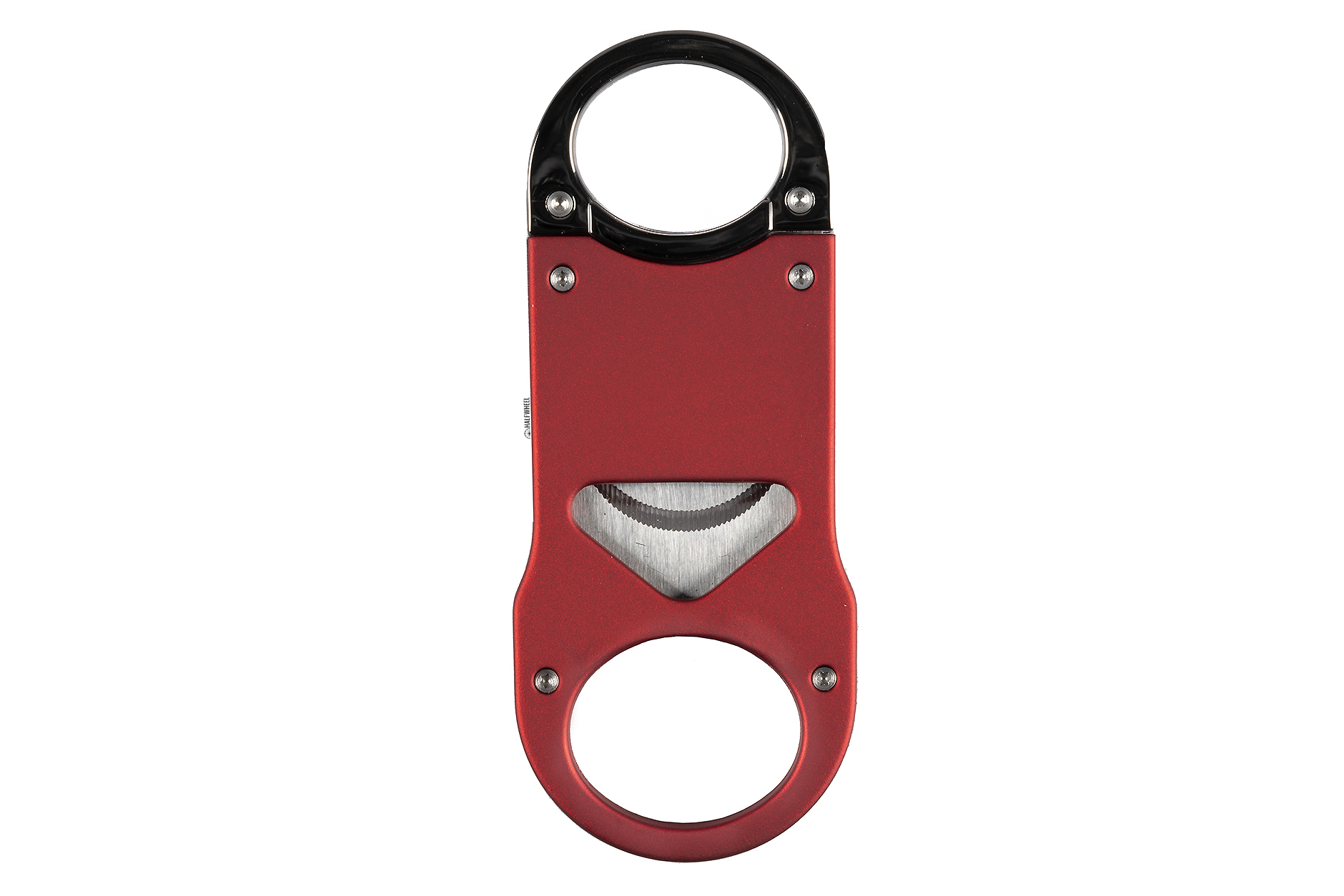 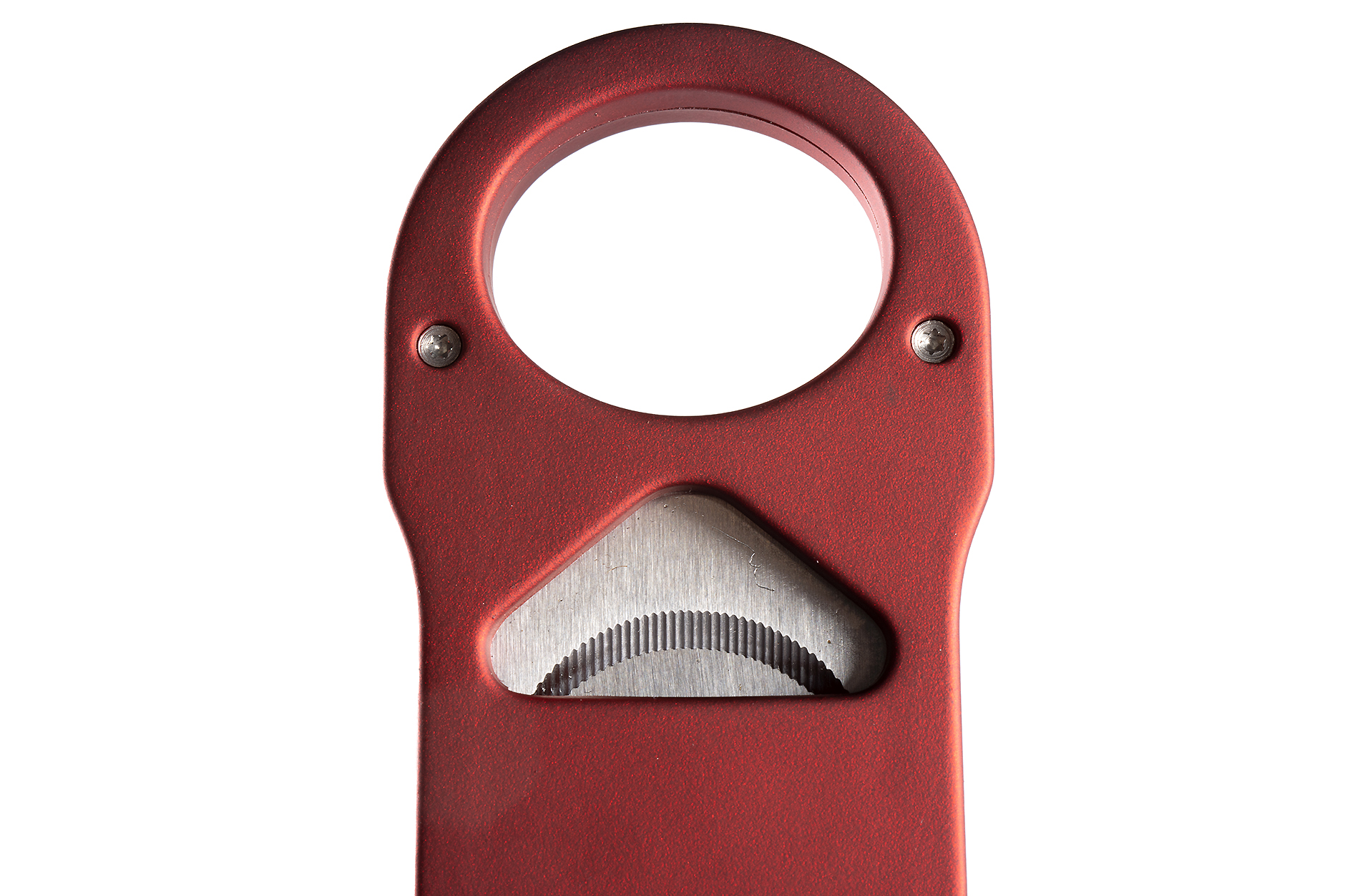 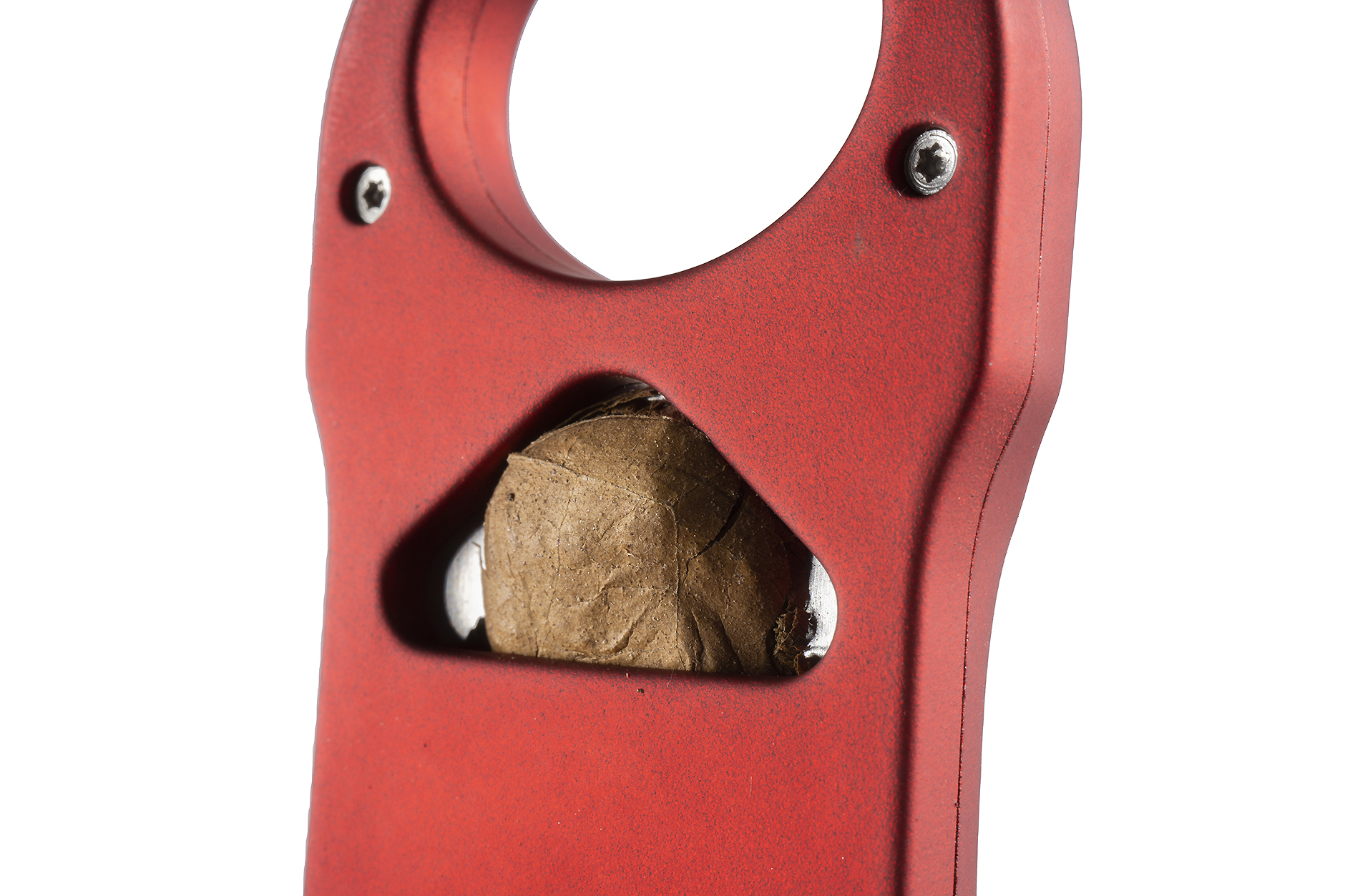 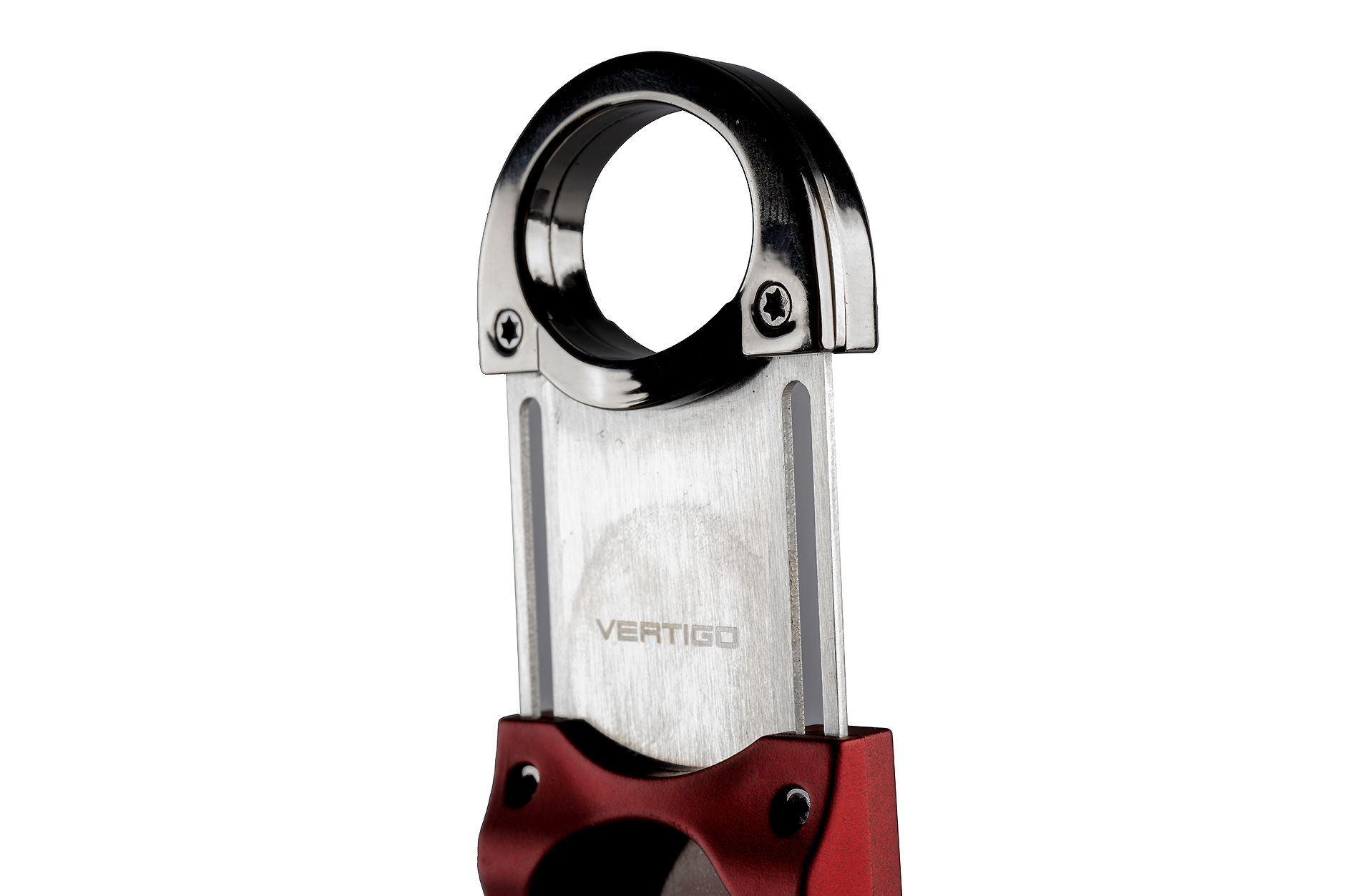 At first glance, the Vertigo Shark is a fairly simple double-guillotine cutter with an exterior made of metal that includes a back plate that has two purposes: to hold the pieces of tobacco after the cigar is cut and, according to the company, to give you “a perfect cut every time.” The back plate of the cutter also features an open slot in the shape of a triangle with round edges, which Lotus says makes for “easy cleaning” of the cap after it is cut.

A closer look at the stainless steel blades shows what makes this cutter different: both blades are serrated, not unlike the teeth of the cutter’s namesake. In addition, the Shark features a cigar rest built into the middle section of the cutter that can easily hold a cigar up to 70 ring gauge with no issues.

In terms of physical specifications, the Shark measures 3.625 inches long when it is closed—increasing to 4.75 inches when it is fully extended—2.25 inches wide and .75 inches at its thickest point. As mentioned above, the body of the cutter is made of metal, but the section that includes the cigar rest has a rubberized finish, and the whole cutter weighs a total of .68 ounces.

According to Lotus, the guillotine blades are capable of cutting caps off of a 64 ring gauge cigar; however, I was easily able to cut the cap off of cigars up to about 70 ring gauge with no problems.

The MSRP is currently $15 each, a decrease from the $19.99 price tag it had when it was first released.

Other than the serrated blades—which are obviously quite different—and the back plate, the Vertigo Shark is basically the same as any other double guillotine cutter.

As a right-handed person, I put my right thumb in the larger opening, while my middle finger goes in the smaller opening—and pull them apart, the stainless steel blade on the left side of the cutter moves on a track, which creates an opening. Next, I place the cap of the cigar into that opening, and either push it against the back plate or not, depending on how deep I want the cut. Finally, I firmly push the left blade closed, which forces both blades to cut through the cap and come to the end of their journey when the opening is fully closed, although there is no lock or trigger to stop them from opening again. 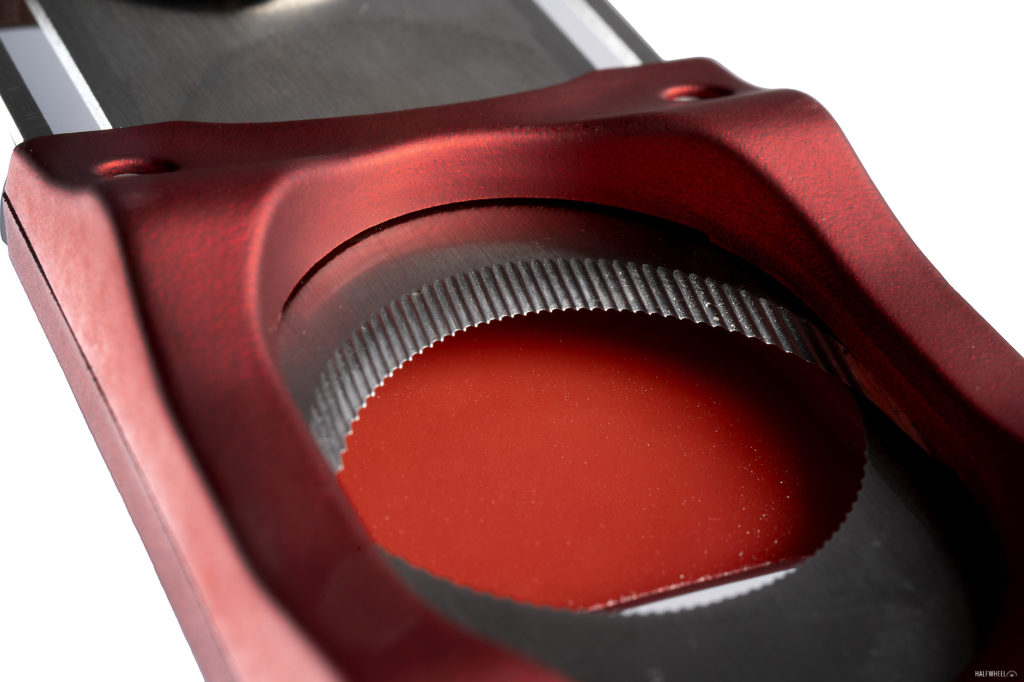 ARE SERRATED BLADES ON CIGAR CUTTERS A GOOD IDEA?

Serrated blades are typically used on knives and can be helpful with cutting certain types of foods like bread and tomatoes. Most recommendations for serrated blades are for cutting foods that have two very different types of textures, where the serrations can cut through the first layer without damaging the inside.

When cutting a hard-crusted bread—think of a baguette—a serrated blade is extremely useful, since you cut with a sawing motion as you push downward. In that example, the hard exterior of the bread crust is cut through while you move the knife both vertically downwards and horizontally in a sawing motion. This is different than how most Americans would cut the ends off of asparagus, where they would just chop downwards.

The serrated blades are designed for this sawing motion. That said, if you have a sharp chef’s knife, cutting through a baguette shouldn’t be any issue.

After once again finding issues with the cuts of a serrated blade cigar cutter, I reached out to Lotus with questions about why they chose to include serrated blades in some of its products and if there were any inherent advantages to them over standard blades that I may have missed.

“We found a serrated blade to consistently result in a clean cut and never dull,” said Rosemary Sharp, president Lotus Group, in an email to halfwheel. “When we planned the company’s initiative to enter the cutter market in a prolific way we wanted to differentiate our offering, hence almost all of our Lotus cutters (“JAWS” which has 16 sku’s in the Lotus line all serrated) have serrated blades it has become our signature.”

This is the third cutter I’ve reviewed with a serrated blade and none of them have cut cigars as well as a decent non-serrated blade cutter. After talking it over, including with another accessory designer, the issue likely is that a double guillotine cutter isn’t going to take advantage of a serrated blade’s ability to saw because it only allows the blades to move in a vertical direction. If serrated knives are any indication, it would seem the blade is going to work when it can move both vertically and horizontally—the sawing motion—at the same time.

My past experiences with serrated blade cigar cutters were actually a bit better than my experience with the Shark, perhaps due to the fact that the Shark is built with a back plate. In my testing, the blades on the Shark often seem to push the cigar away from the back plate as they pass through the cap. This sometimes leaves behind a “shelf” or “cliff” of tobacco, where a small bit of uncut tobacco is jutting out of the cap that was just cut.  In addition, the serrated blades leave behind significantly more bits and pieces of loose tobacco, to the point where I became accustomed to picking at least one bit of tobacco out of my mouth every time I smoked a cigar that I used this cutter on.

As for these blades never becoming dull, that’s unlikely to be true. To my knowledge, all blades will eventually dull with use as the metal changes from a sharp angle to a more rounded one. After reviewing cigar cutters for more than eight years, I’ve also learned that most good cutters don’t become noticeably dull and that most cutters fail for reasons other than a dull blade.

At this point, I am of the belief that it is probably more than a marketing gimmick and—at least in the case of the Shark—one that actually gets in the way of decent cuts. In addition, the blades do not seem to offer any obvious benefit when cutting cigars, especially when compared to the large number of non-serrated blades that cut cigars extremely well. 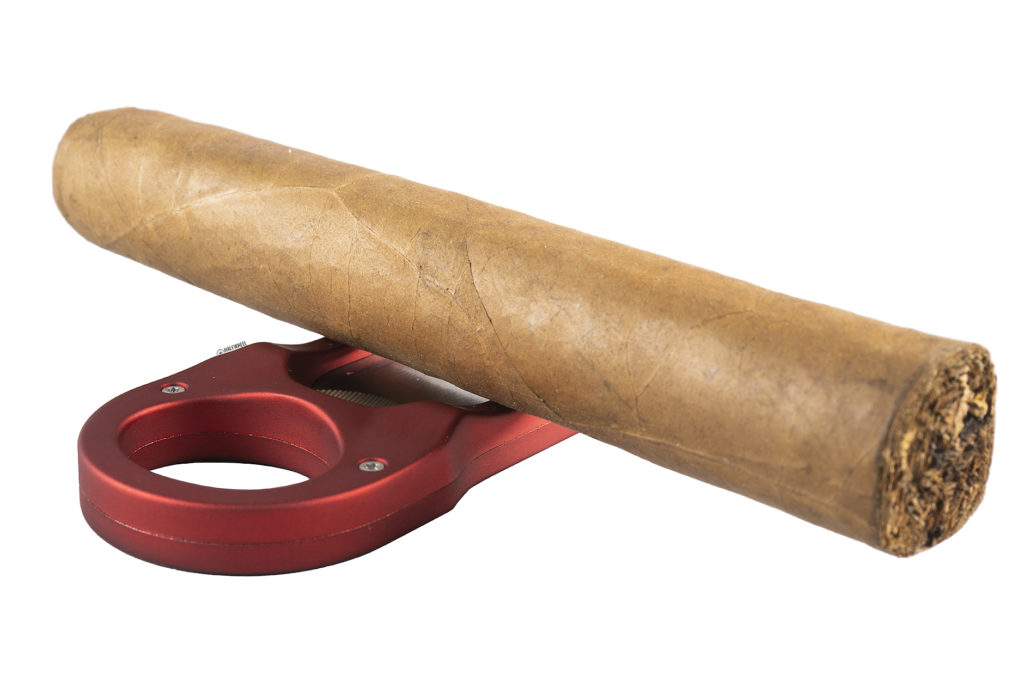 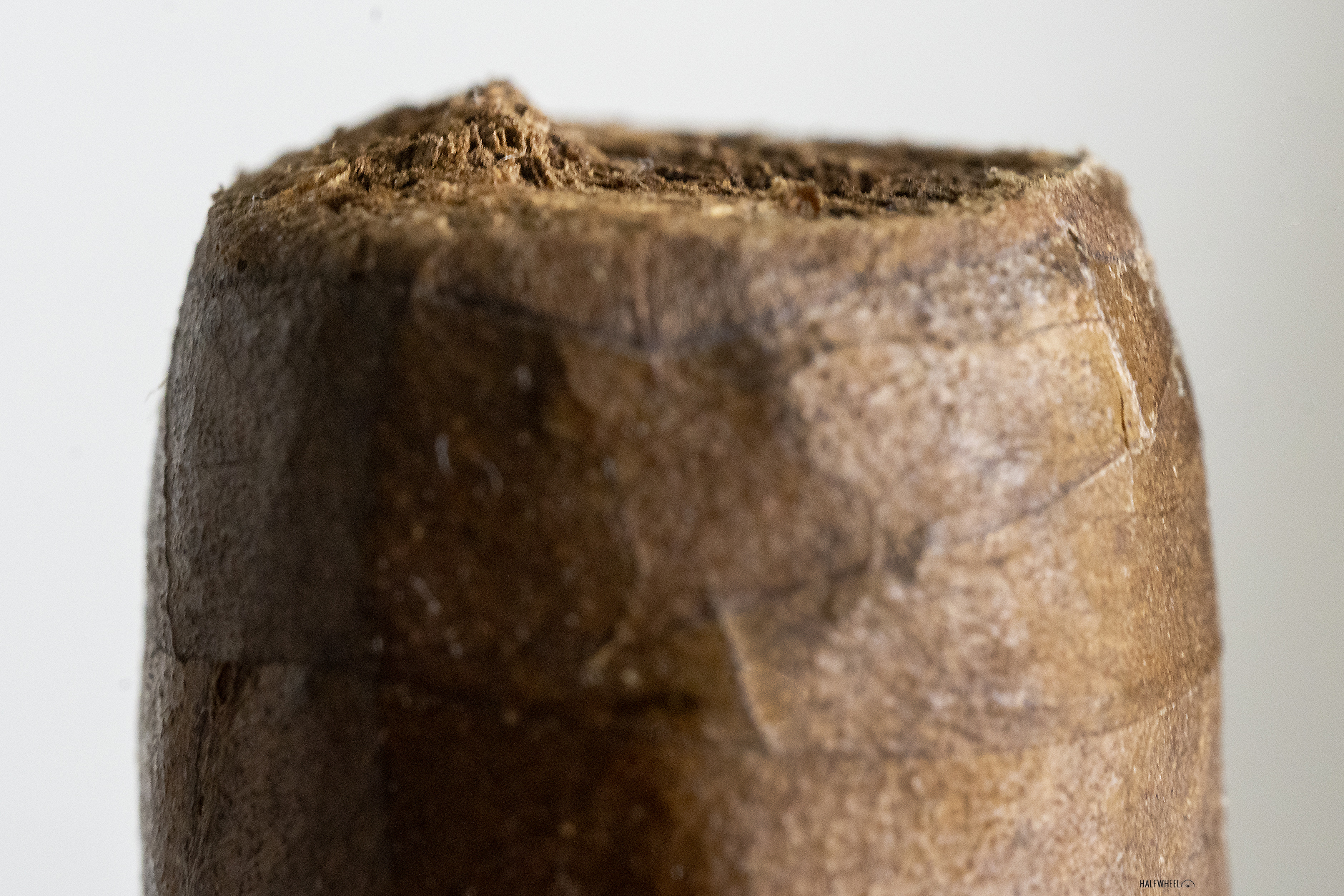 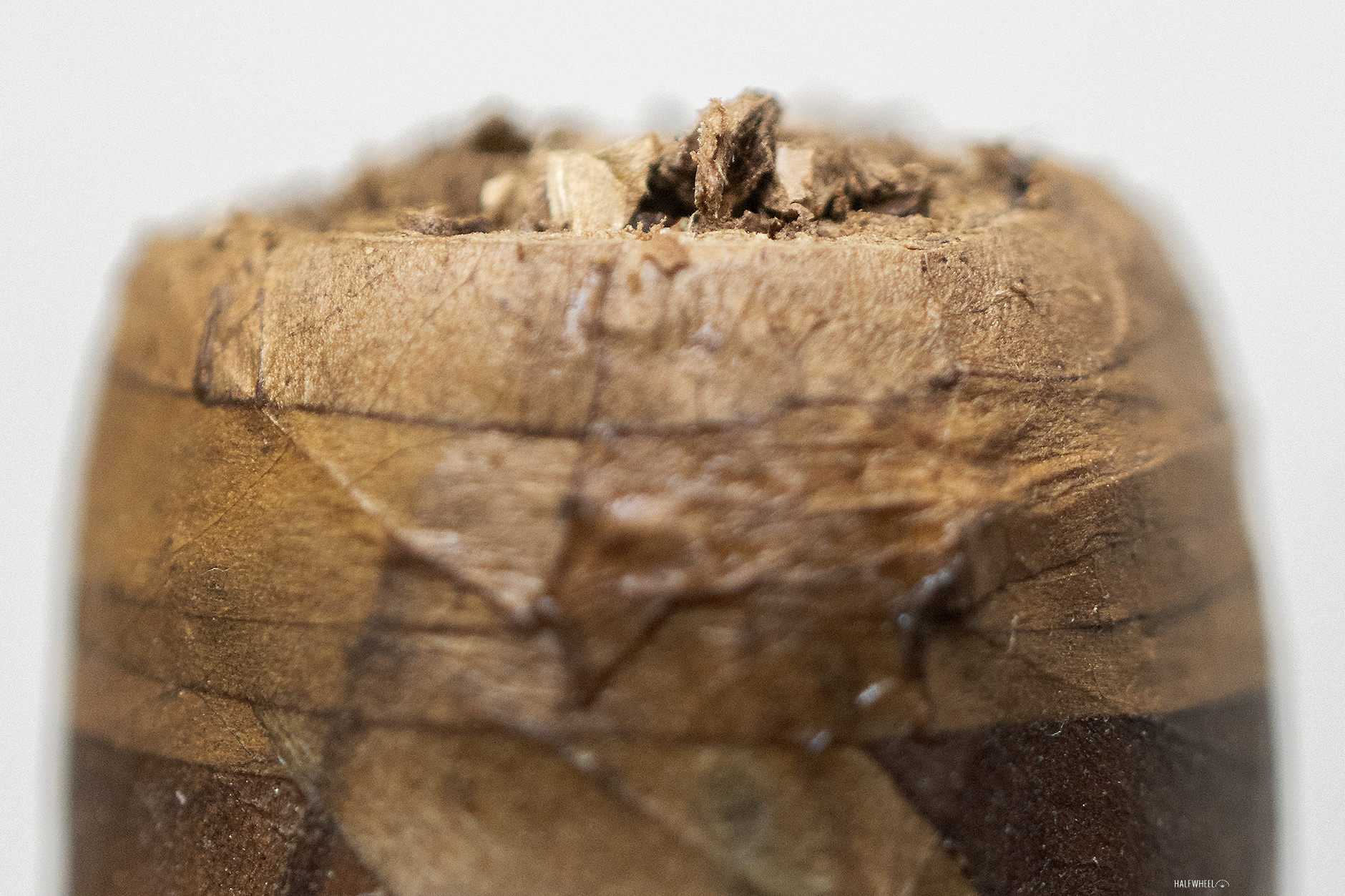 There are a small number of different double-guillotine cutters built with serrated blades, but I cannot recommend any of the ones I have reviewed in the past due to the less-than-stellar cuts they gave me.

With that said, I think one of the most obvious competitors to the Shark—albeit with regular blades instead of serrated blades—is the Visol Standard ($10.) There are other differences between the two cutters: the Visol Standard is $5 less than the Shark but can only cut cigars up to 60 ring gauge. In addition, while both cutters feature built in cigar rests, the exterior of the Visol is made of plastic instead of metal like the Shark. While I have not officially reviewed it on this site, I have used the Standard a number of times and it is a much better choice when it comes to actually cutting cigars, which is the main reason I would easily recommend it over the Shark. 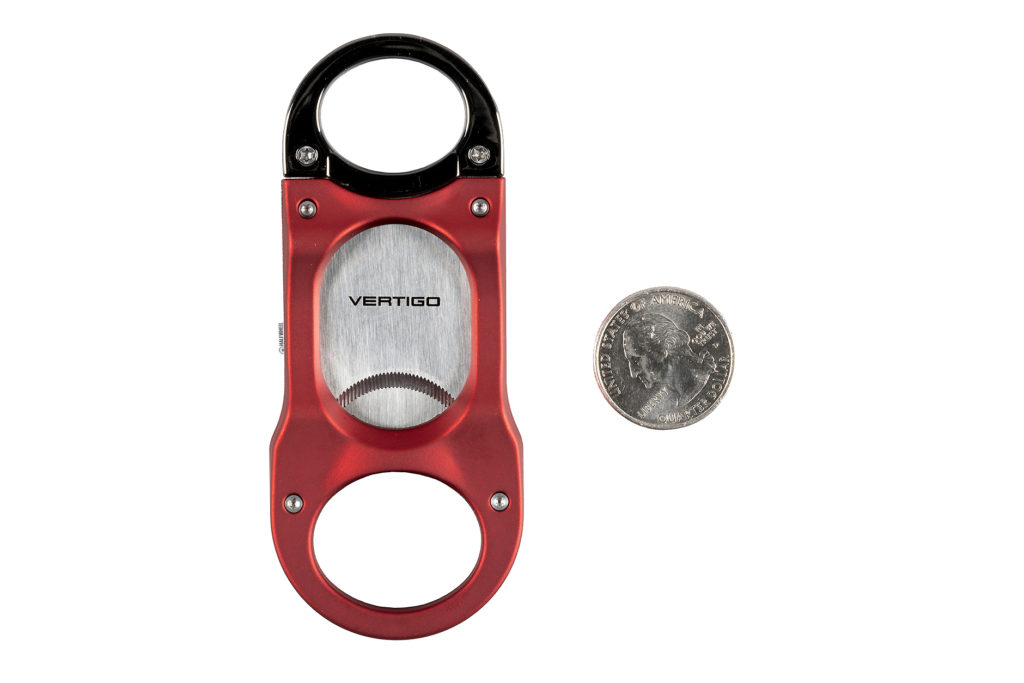 SHOULD YOU BUY THIS CUTTER?

While I like the overall look, weight and feel of the Vertigo Shark, it does not produce cuts that are as sharp or as clean as many cutters with less interesting blades. Unfortunately, the combination of the serrated blades and a back plate actually gave me noticeably inferior results. While the cigar rest is useful and the $15 price tag is extremely competitive, I just cannot depend on it to give me clean and even cuts. If Lotus releases the same cutter at the same price point—potentially sans back plate—but built with normal blades, I think it might have a winner, but after reviewing three different cutters with serrated blades, I think it might be time to abandon the idea that this is better for cigars.