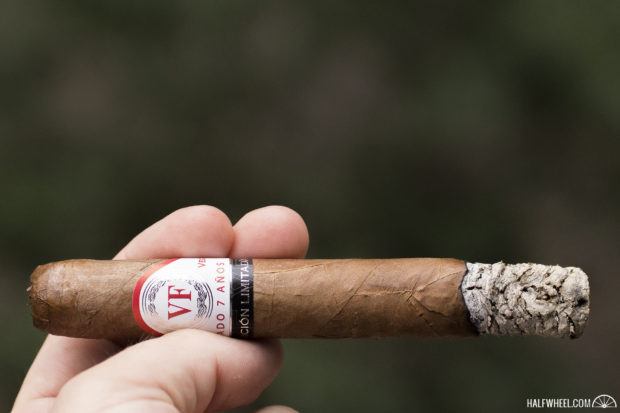 Let the record show that I have never tried to claim responsibility or influence for any decisions made by a cigar company. However, after a certain cigar that was destined to be a European-only release got a 92 rating from me on this website, it soon became available in the United States.

That cigar is the VegaFina Robusto Extra PigTail Añejado 7 Años.

VegaFina isn’t the best known of Altadis U.S.A.’s 22 brands, but over the past several years has had a steady stream of new releases, including the VegaFina Fortaleza 2, the VegaFina Sumum and VegaFina Nicaragua. While generally good cigars in their own right, they haven’t helped the brand reach the status of the company’s flagships, Montecristo and Romeo y Julieta.

One place where it does do well is in Spain, as its profile seems to connect well with smokers in that country as well as in other parts of Europe. As such, Tabacalera S.L.U.—which is part of Imperial Brands, plc, the British tobacco conglomerate that also owns Altadis U.S.A.—has launched numerous limited editions for VegaFina in other parts of the world. That was also going to be the plan for the VegaFina Robusto Extra PigTail Añejado 7 Años. It was destined to be released in Spain in May, with other markets receiving it in the months after, though the United States was not to be one of them.

I’ve called the name clunky before and I will do it once more here, though I must also call it accurate. The robusto extra, or what Americans might refer to as a toro, does feature a pigtail cap and the Ecuadorian habano wrapper has been aged for seven years. Underneath that sits an Indonesian binder and fillers from Colombia, the Dominican Republic and Nicaragua. Seemingly the only thing missing from the name is that it’s an Edición Limitada, something that is mentioned on the band and boxes.

Here’s what I said about the VegaFina Robusto Extra PigTail Añejado 7 Años when I reviewed it in April 2017:

I usually reserve the word disappointed for reviews of bad cigars, but it’s particularly applicable here because I’m extremely disappointed that this cigar isn’t scheduled to come to U.S. shelves. The VegaFina Robusto Extra PigTail Añejado 7 Años offers so much of what I look for in cigars: subtlety, nuance, measured strength and pepper, along with above average combustion and technical performance. This blend asks for your attention and focus, and rewards it in spades both in flavor and aroma. A great cigar that I hope I’ll be able to get more of before too long.

With the cigar now available in the United States, and having recently earned the #7 spot on halfwheel’s Top CIgars of 2017 list, we picked up a few off the shelf to see how it compared to the ones destined for Spain, and if it still held the same appeal nearly nine months after the original review. 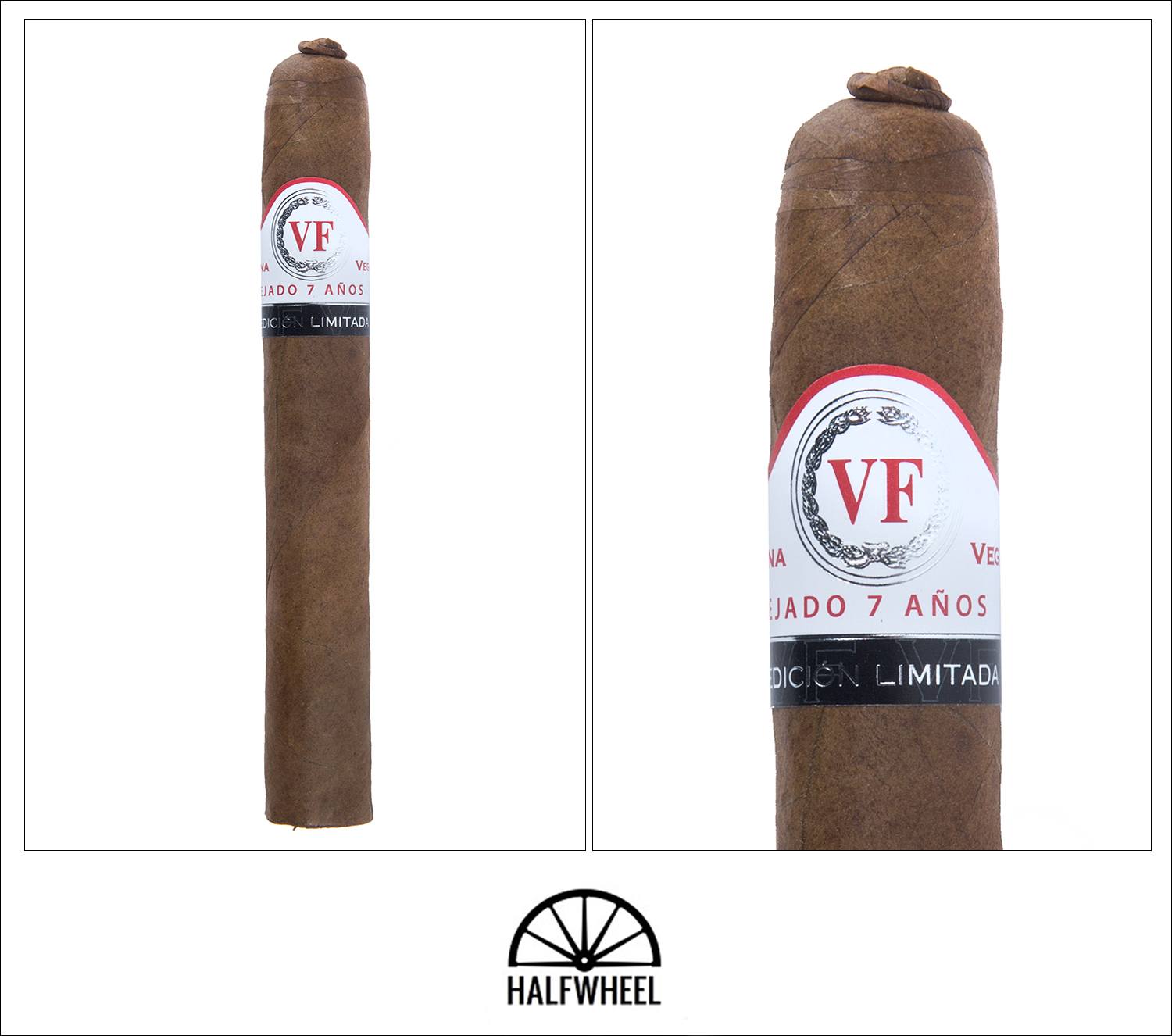 The first thing that strikes me about the VegaFina Robusto Extra PigTail Añejado 7 Años is the color of the wrapper, as it still seems darker than what I would associate with the VegaFina brand, though on its own it is still just on the light side of medium brown. The toffee-colored leaf has a matte finish, fairly even coloration, surprising glue marks, small veins and barely any tooth visible to the naked eye. It is rolled clean and firm, the pigtail is tight but pressed flat and the rest of the cap looks decent. The foot is upfront with wheat bread and just a bit of pepper and subsequent smells reveal just a bit of sweetness that suggests flowers or green apples. The cold draw meanwhile is smooth and buttery, moving towards white bread with little sweetness or pepper.

The VegaFina opens with a decent bit of pepper and wheat toast; it’s a dry profile but a fairly familiar one, both in memory of the cigar when I first smoked it and from general food consumption. The light leaves help the burn line advance fairly quickly, while also resulting in a wrapper split before the cigar has burned for five minutes. The burn line gets a bit wavy but the cigar continues to deliver plenty of smoke with each puff, though it quickly dissipates, leaving my desire for a smoke-filled photo unfulfilled. The ash holds on well past the one-inch mark, as the profile picks up a bit of slightly burnt popcorn before shedding the char and getting fuller by way of wheat bread crust, some mixed nuts and the beginnings of campfire smokiness. Shortly after my compulsion to knock the ash off gets the best of me, the cigar develops its first bits of appreciable sweetness by way of some butter and very subtle Altoids-esque mint. Through the nose the cigar is impressively peppery, with primarily white pepper providing the tingle but some black pepper mixed in for oomph. Through the first half, the VegaFina has been largely right around medium in terms of strength, flavor and body, offering sufficient amounts of each for my palate. I’m pleased to say that the split wrapper has not yet caused any issues for the cigar and the burn line has almost completely evened itself out, though I’m becoming less of a person to credit or fault a cigar too much for that particular aspect. Dry woods begin to make a play for the dominant flavor at the midpoint and the drying effect they have on the palate is readily apparent. The finish of the cigar has a certain tang that I’m on the fence about, though it’s hardly off-putting, and fortunately, it doesn’t stick around for long and is replaced by peanuts. That too, is a quick encounter, as the cigar opens up the pepper shaker just ahead of the band needing to come off and hits the nose with its strongest offering yet. The strength dials back steadily as the burn rate slows way down, though I will admit I’m not rushing things either and the woodiness returns with a bit more char and black pepper for the final inch. A bit of peanut butter enters to close things out, joined by some rocky earth that finishes the cigar after about an hour and 45 minutes of smoking time.

I was incredibly high on the VegaFina Robusto Extra PigTail Añejado 7 Años and after revisiting the cigar three-quarters of a year later, my enthusiasm may be a bit more tempered but it remains an incredibly well-blended cigar that delivers one of the best values on the market. The aged wrapper offers flavorful smoothness, there's more punch to the blend than one might expect and the construction is nearly flawless. While this sample didn't quite seem as nuanced as I remember the others to be, it just makes it that much easier to recognize and appreciate the flavors it offers. I'm certainly happy that this cigar was brought to the U.S.; try it and I think you will be as well.