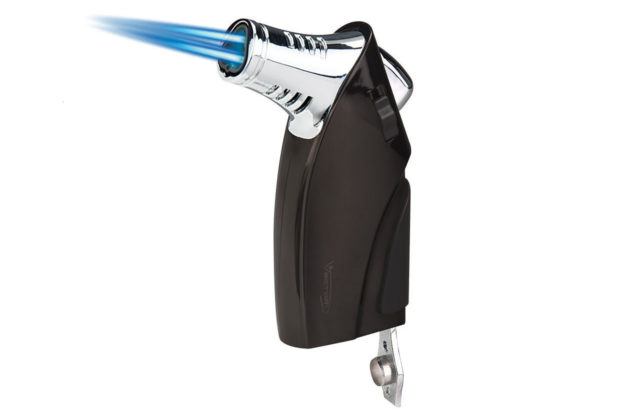 Vector-KGM Industries has just released the Ironfist, a new angled triple flame lighter designed for quick lighting of a cigar and reliability at high elevations.

It’s a wind-resistant lighter that the company says will work at elevations of up to 14,000 feet above seal level. The Ironfist measures 2.32 inches wide, 1.61 inches long and 3.7 inches tall, while checking in at three-tenths of a pound. Vector says the lighter can produce temperatures of up to 2,400 degrees Fahrenheit, or 1,316 degrees Celsius.

It also features a fold out punch cutter on the both of the lighter and a single-action, push-button ignition that can be locked in place for extended lighting sessions.

It’s offered in five colors: black matte, sparkle black, gunmetal satin, sparkle Blue and Prizm, each priced at $35. It is currently available via Vector’s website, while shipping to retailers is scheduled to begin this week, according to James Park.