In 2014, Drew Estate teamed up with the online cigar community Cigar Dojo to create a special blend to commemorate the site’s one year anniversary that was sold exclusively through Florida-based retailer Smoke Inn.

However, there were a few major changes to the new release: first, instead of being sold exclusively at one retailer, the cigars were available at all Drew Diplomat retailers; second, the price increased from $99.99 to $107.97 per 10-count bundle.

Drew Estate also offered a specific retail display for the retailers who sold the cigars.

“DE absolutely loves the Dojo community and app because it represents the finest in cigar fellowship and technology,” said Jonathan Drew, president and co-founder of Drew Estate, in a press release. “Dojo Dogma signifies our commitment to this distinguished community with a deep sense of purpose, as Dogma was created with intense, heartfelt passion. This is probably my favorite limited edition to date, along with the ShadyXV.”

The newest incarnation of the Undercrown Dojo Dogma was re-released during the Rocky Mountain Cigar Festival that took place in August in Broomfield, Colo. The Undercrown Dogma 2018 is covered in a mottled mocha brown wrapper that resembles parchment, along with some very obvious oil. There are a number of bumps and veins running up and down the length of the cigar, and the soft box-press is an appreciated touch. Aroma from the wrapper is a combination of manure, bitter coffee, sawdust, oak and leather, while the cold draw brings flavors of hay, wood, dark chocolate, creamy almonds and black pepper.

I know immediately this cigar was going to be different than the Undercrown Dojo Dogma that I smoked four years ago. Instead of earth or dark chocolate on the palate, I taste a distinct mesquite note that only becomes more dominant as the first half progresses. Having said that, there are a number of other flavors that are fairly easy to pick out, including bourbon, leather, bitter espresso beans, almonds and citrus. Unlike the first samples, there is a pleasant amount of spice on my lips that hangs around until just after the halfway point, as well as some black pepper on the retrohale that continues to impact the profile until the end of the cigar. The sweetness in the blend is different as well: while I noticed black licorice and peppermint the first time around, the newest version is full of orange sweetness, which hits its high point just after the halfway mark before fading rapidly in the final third. 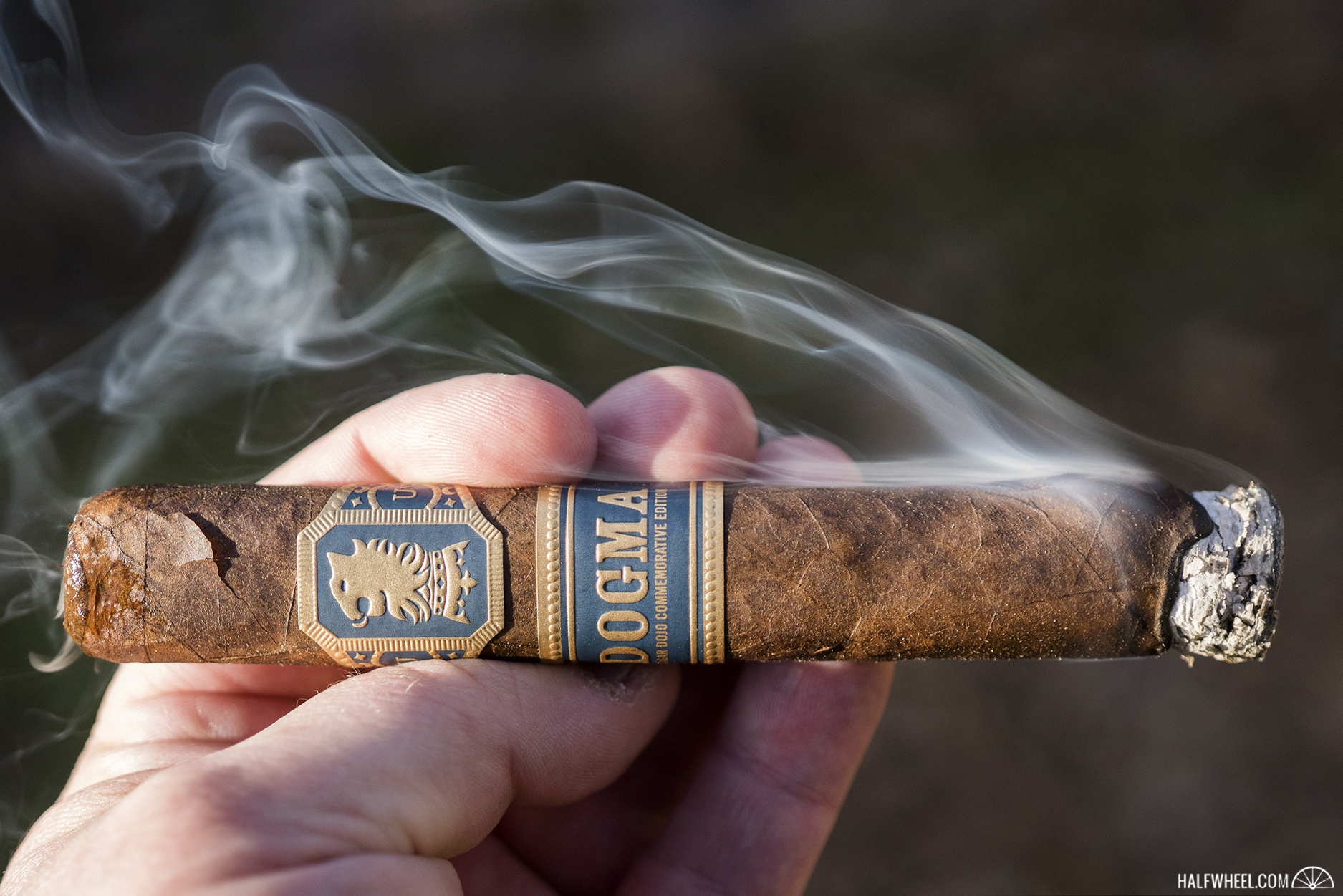 Construction-wise, the Dojo Dogma gives me no issues whatsoever with the draw—which features just the right amount resistance after a straight cut— but the burn is a different story, as I have to touch it up twice to avoid major issues, once in the first third and again in the final third. As is the case with many of Drew Estate’s products, the smoke production is so thick and copious that I am glad I smoked it outside, while the overall strength starts at a spot between mild and medium and ends solidly in the medium range by the time I am finished one hour and 42 minutes later.

I was extremely excited to get my hands on the new release of the Undercrown Dogma, just to see how it would compare to what I remembered from the first time around. Well, it turns out that the shifting dominant flavors between thirds was gone, replaced by an extremely obvious—albeit not overwhelming at any point—mesquite note that played well with the other flavors in the profile. There was some orange sweetness as well, although it was relegated exclusively to the first two thirds, and the overall construction was fine with just a couple of touchups. While I liked and can thus recommend the new Undercrown Dogma, fans of the first release might be disappointed to find a very different cigar the second time around.