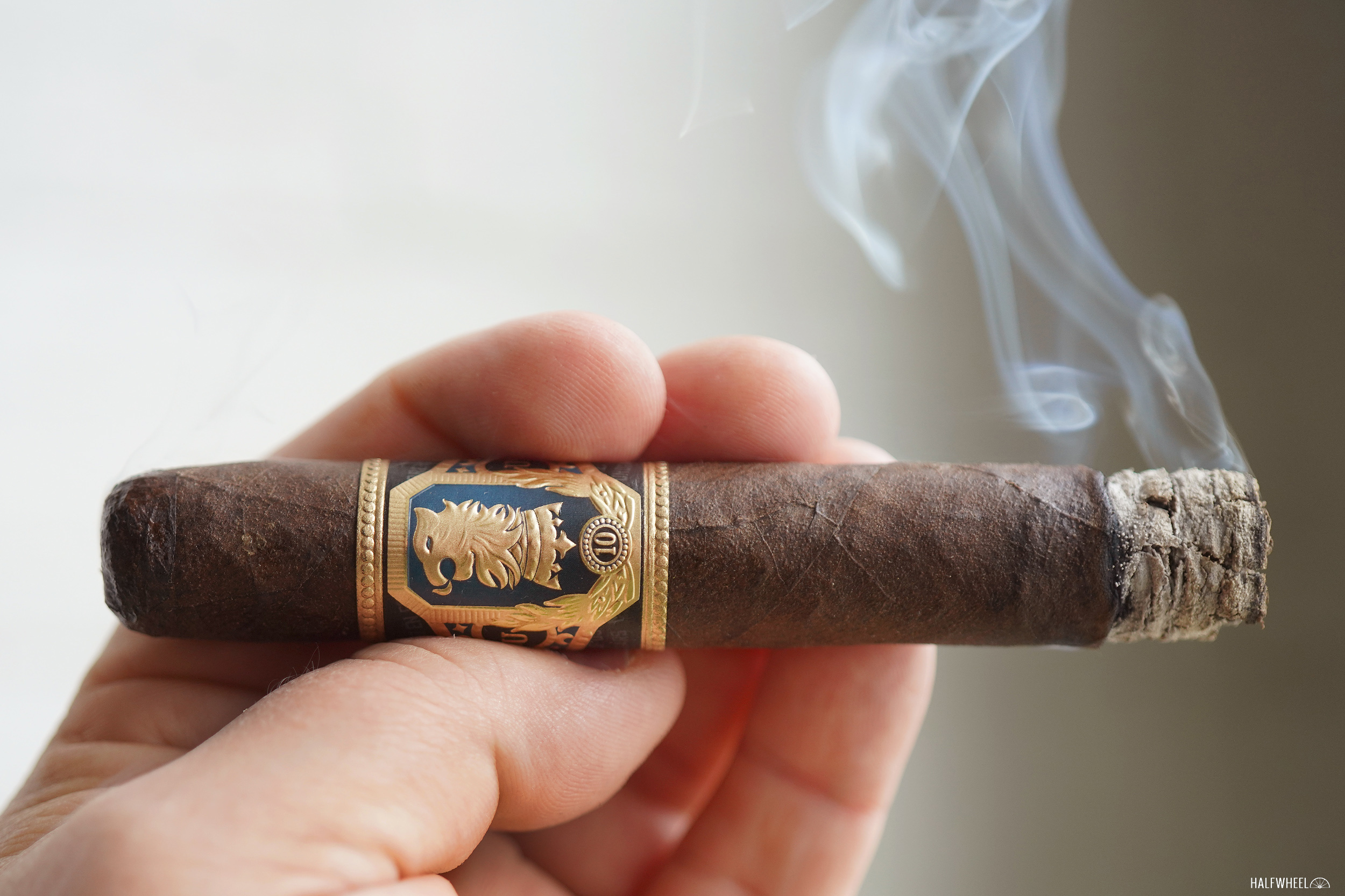 Way back in 2011—at the same time that we were coming up with the idea for halfwheel—Drew Estate released a new line named Undercrown which had an interesting backstory. The story was that Drew Estate would let its rollers smoke cigars for free while they rolled and that the rollers at the company’s factory were smoking too many of Liga Privada cigars at a time when there were already very few available to be sent to retailers.

After being told they had to cut back, the torcedores supposedly came up with their own cigar that incorporated “many of the same rare tobaccos, but of different vintages and primings” as the Liga Privada blend, which Drew Estate put into production and dedicated it to “our worker’s ingenuity, resourcefulness and passion for a great cigar.”

In the decade since, there have been a host of additions to and variants spawned from the Undercrown line, including Sun Grown and Connecticut-wrapped versions, a cigar release as a collaboration with the online cigar community Cigar Dojo and even a limited edition version that was the result of a collaboration with Shady Records, Eminem’s music label.

With that many different versions of the blend already produced, it was not exactly a surprise when Drew Estate announced the Undercrown 10 during a live Facebook event in May, which—as the name indicates—was blended and released specifically to commemorate the 10th anniversary of the aforementioned Undercrown brand. Like the original Undercrown, the newest version is covered with a San Andrés wrapper from Mexico, but that is where the two cigars part ways blend-wise. Under the wrapper, the Undercrown 10 incorporates a Connecticut River Valley broadleaf binder and Nicaraguan fillers; the original blend is made up of a Connecticut River Valley sun grown habano binder as well as filler tobaccos from both Brazil and Nicaragua. “Undercrown 10 offers smokers an experience of Mexican hot chocolate … naturally sweet with hints of raisin and cacao … waves of intense black pepper … along with notes of sun-dried cherries, espresso, woodiness and earthiness,” said Pedro Gomez, factory ambassador for Drew Estate, in a press release on the company’s website.

As of right now, Drew Estate has announced six Undercrown 10 vitolas, four of which are regular production offerings. As for the other two, the first is the 6 x 46 Undercrown 10 Lonsdale Factory Floor Edition a limited edition that comes packaged in a box with 20 lonsdale cigars as well as puritos of the individual blend components. In addition, Drew Estate has announced the Undercrown 10 Tuani, a 6 x 52 belicoso event-only release packaged in a two-count box that will be available at events with Gomez. 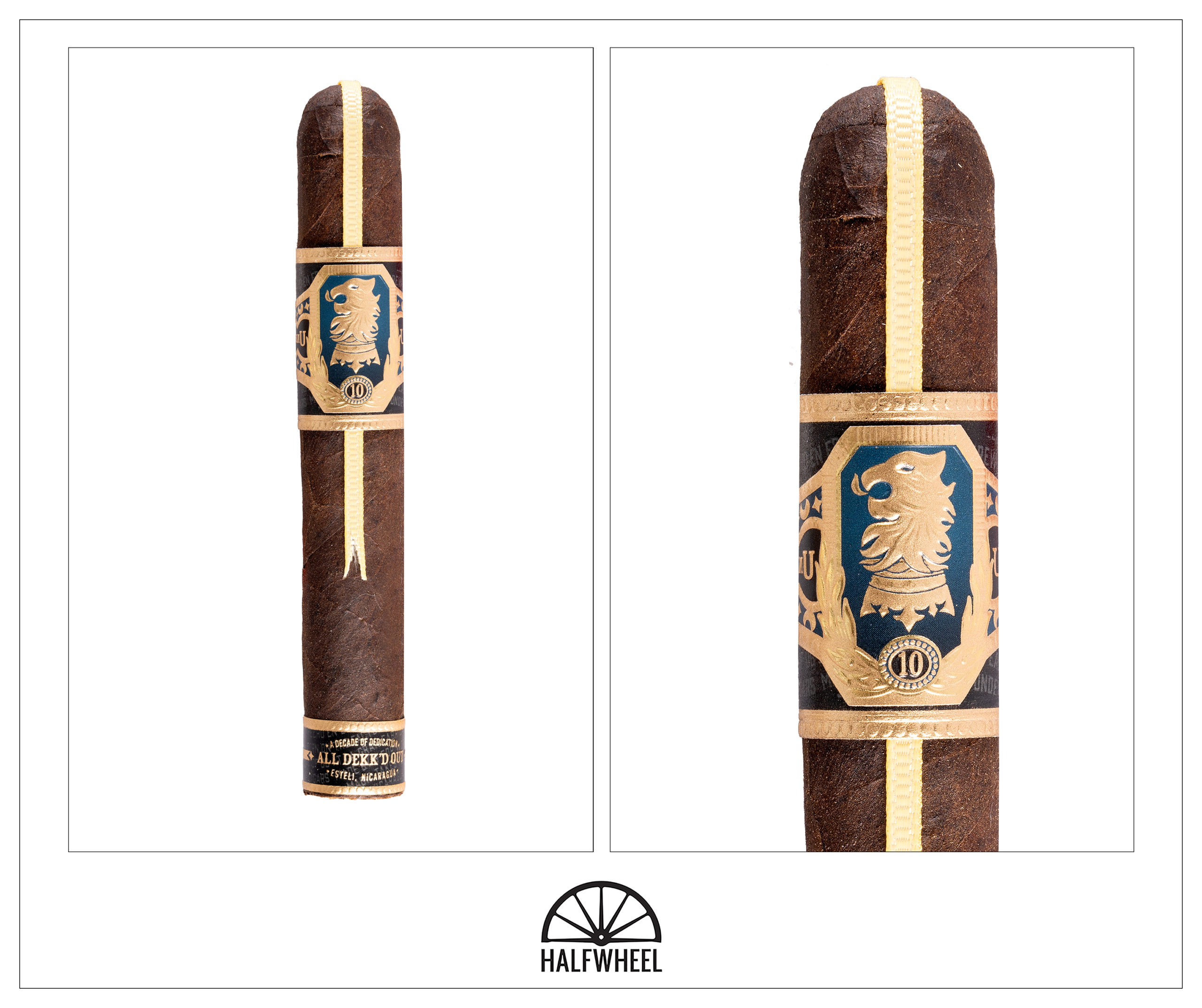 While the presentation is not exactly understated, the yellow ribbon, foot band and extra background band—under the main band—all look very much like they belong. Underneath all of those items is an extremely oily, extremely rough to the touch and exceedingly attractive espresso brown wrapper. The cigar is quite hard when squeezed, not quite rock hard, but I do find small soft spots just under where the ribbon ends on two samples. The aroma from the wrapper is a combination of sweet tobacco, earth, barnyard, pepper and a touch of mint while the foot brings notes of leather tack, espresso beans, sourdough bread and more earth. Finally, the cold draw has flavors of strong and powdery cocoa nibs, gritty earth, hay, almonds, vegetal and raison sweetness.

Starting out, the Undercrown 10 features an abundance of both spice and black pepper—on my tongue and on the retrohale—though, both thankfully calm down enough within 10 puffs or so to allow some a nice combination of floral and dark chocolate to take the top spot in the profile. Those are followed closely behind by notes of gritty earth, leather tack, hay, toasted bread, cedar and slight espresso bitterness, the latter of which is also present on the finish. Even though reduced, there is still plenty of spice on my tongue—albeit not enough to decoct from the flavors—while the retrohale includes also includes a small amount of plum sweetness. Construction-wise, the cigar has an excellent draw after a simple straight cut and a wonderful burn, while the smoke production is massive off of the foot. The body is full while the strength starts out already closer to medium than mild, and has no issues hitting a point just under the medium mark by the time the first third comes to an end.

While the combination of dark chocolate and floral continue to be the main flavors of in the second third of the Undercrown 10—albeit with more of the former than the latter at this point—there is at least one significant change in the profile; specifically, a slight increase in the plum sweetness on the retrohale. There is also a bit more spice on my tongue, while the secondary flavors include leather, earth, sourdough bread, hay, cedar and baker’s spices. Both the burn and the draw continue to impress, while the smoke production is still very thick flowing from the foot. In terms of strength, the Undercrown 10 increases enough to come quite a bit closer to the medium mark right as the second third closes. Both dark chocolate and floral—by now, a very familiar and not unpleasant combination—remain the top flavors during the final third of the Undercrown 10, combining with the plum sweetness—still just a little lighter than I would like—on the retrohale and an abundance of black pepper. In addition, there is less spice than there was at its peak in the second third, and additional flavors of bitter espresso, cedar, cinnamon, hay, peanuts and toast flit in and out at various points. While the draw remains wonderful, the burn takes a turn for the worse, meaning I have to touch up twice in quick secession. Finally, the strength increases noticeably, easily reaching a point well past the medium mark before I put down the nub with a bit less than an inch remaining. I really enjoyed the Liga Privada 10 Aniversario and so was looking forward to trying the newest commemorative release from Drew Estate. While the Undercrown 10 Robusto is nowhere close to as good as the aforementioned Liga Privada, I actually found it to be a richer, more complex version of the Undercrown blend, Corona ¡Viva! notwithstanding. The main flavor combination of dark chocolate and floral is not one I taste in cigars very often and it was only enhanced by the plum sweetness on the retrohale, albeit not as much as I would have liked at certain points in the profile. Construction was very good overall, while the medium-plus strength was well-integrated, making the Undercrown 10 a cigar that I can easily recommend you trying, especially if you have found the regular Undercrown line lacking.