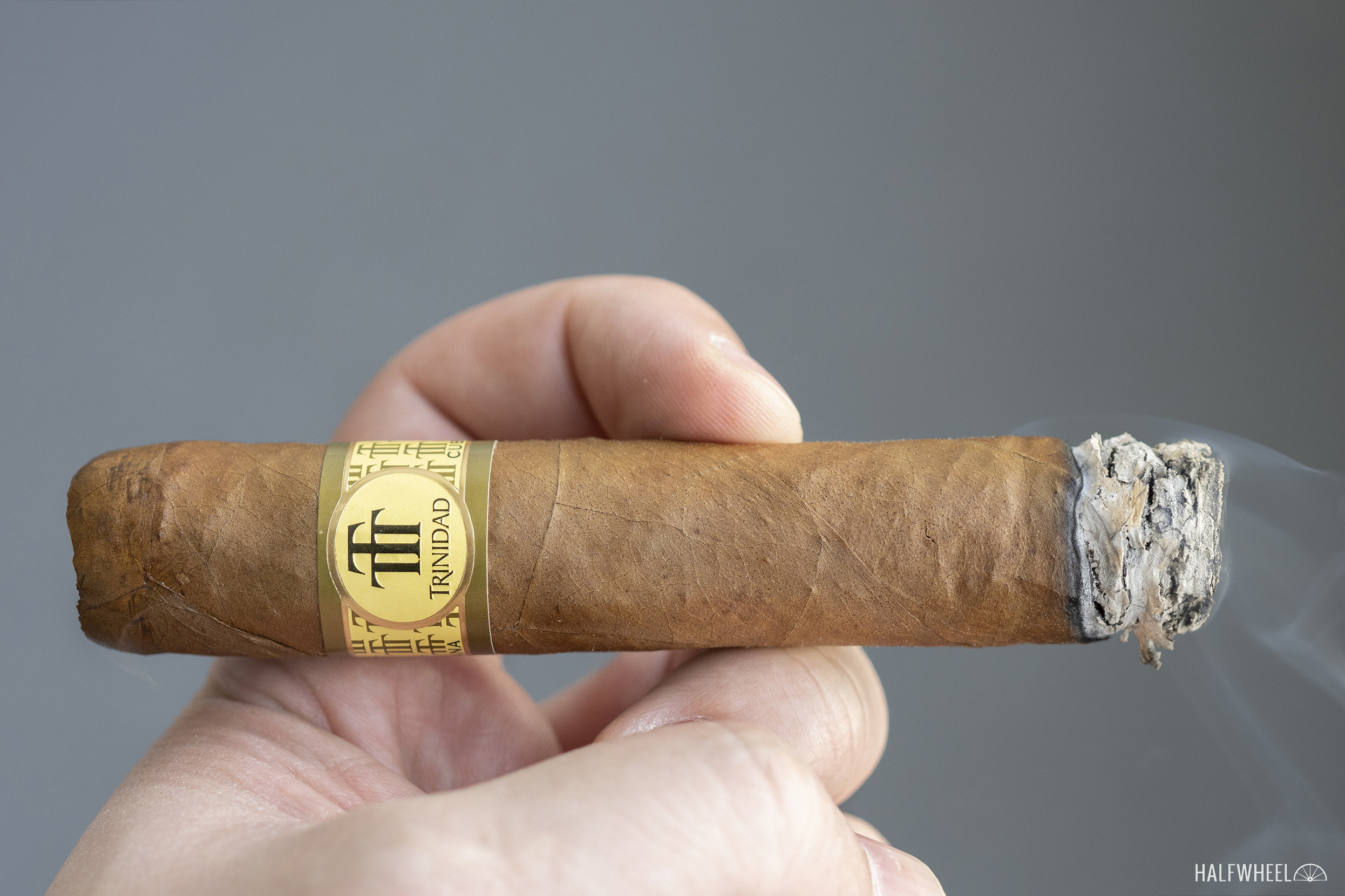 In 2019, the Cuban-made Trinidad brand celebrated its 50th anniversary. As is commonplace in the cigar industry, Habanos S.A. released a special cigar to mark the occasion.

What is a bit less commonplace is that there were a total of five new additions—three regular productions and two limited editions. For some brands that would be nothing to write about, but prior to 2019, Trinidad had just five regular production cigars as part of its offerings.

While there were five new additions there weren’t five new cigars. One of the releases is the Trinidad Topes, a 2016 Edición Limitada that became a regular production release.

The other two are completely new: 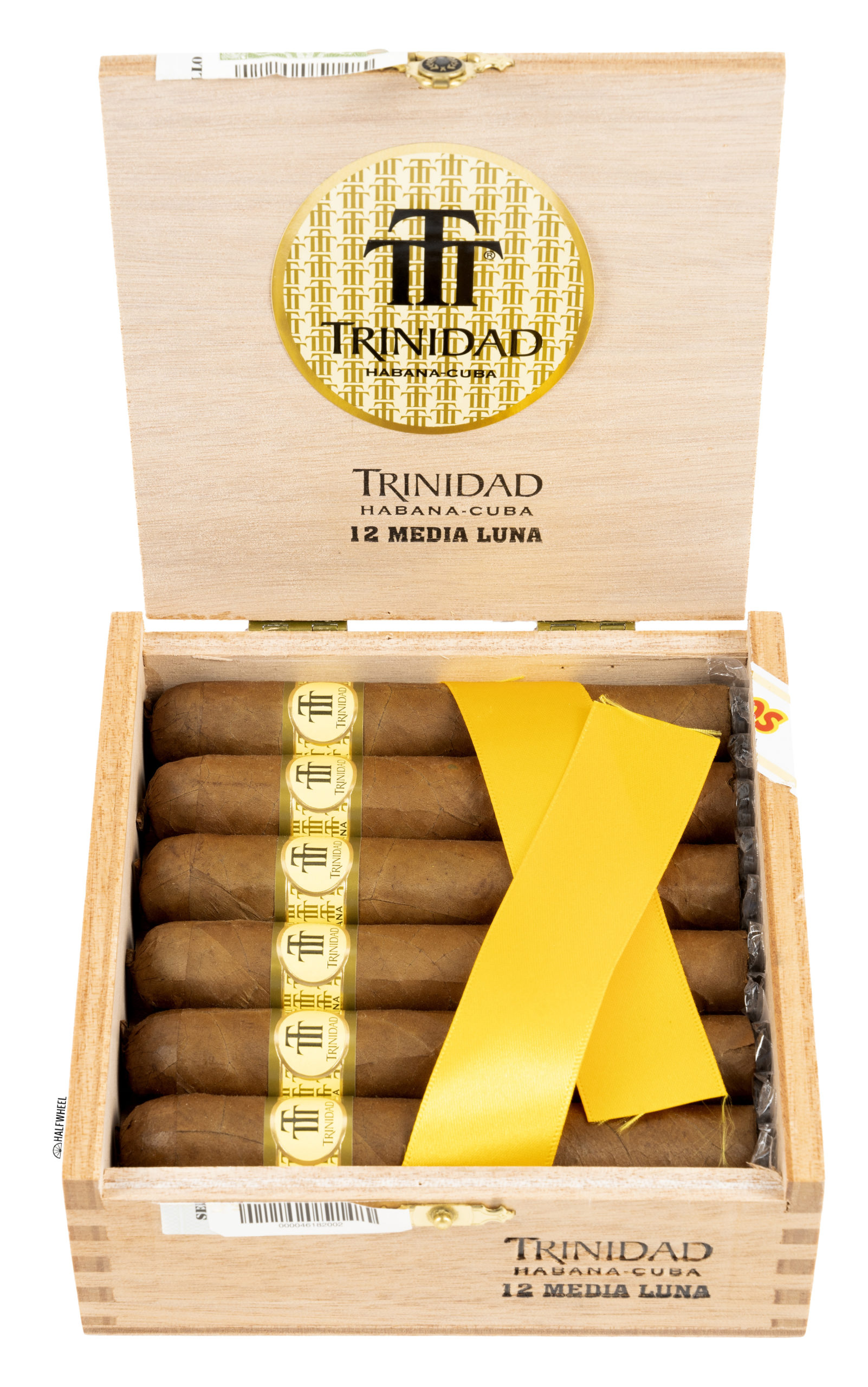 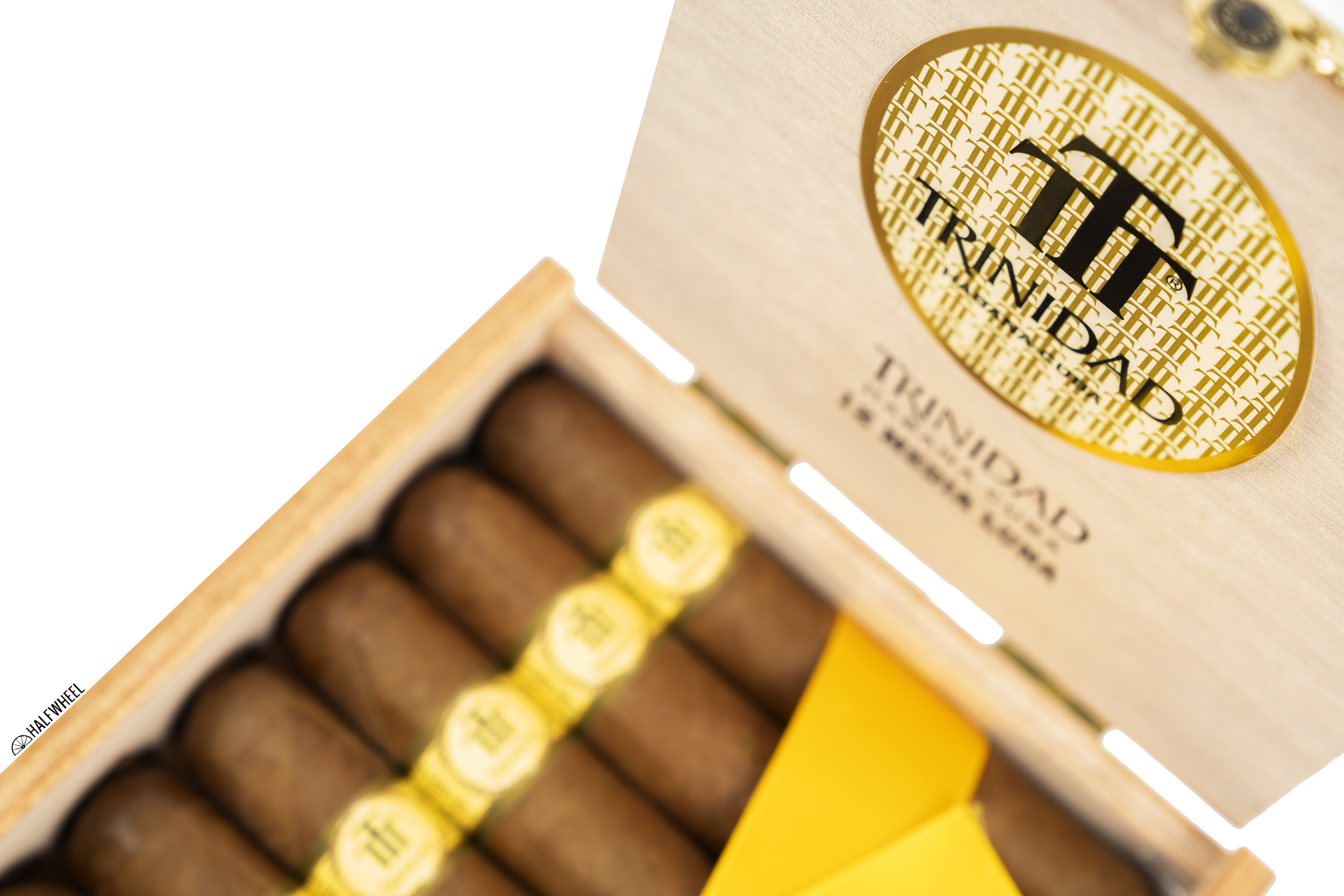 Trinidad’s history is complicated. The Trinidad family claims that it started the brand, known as Trinidad y Hermanos, in 1905. It renamed the company to “TTT Trinidad” in 1958 but the company was seized by the Cuban government in 1960. Habanos S.A. claims a different birthday, saying that Trinidad was first rolled in 1969, with production taking place at El Laguito alongside Cohiba.

Those cigars—a 7 1/2 x 38 lancero—were used as diplomatic gifts alongside the Cohiba marca. In 1998, the Trinidad Fundadores went on sale, marking the first time the state-run Cuban company had sold cigars under the name. Altadis U.S.A. has the U.S. trademark to the Trinidad brand. 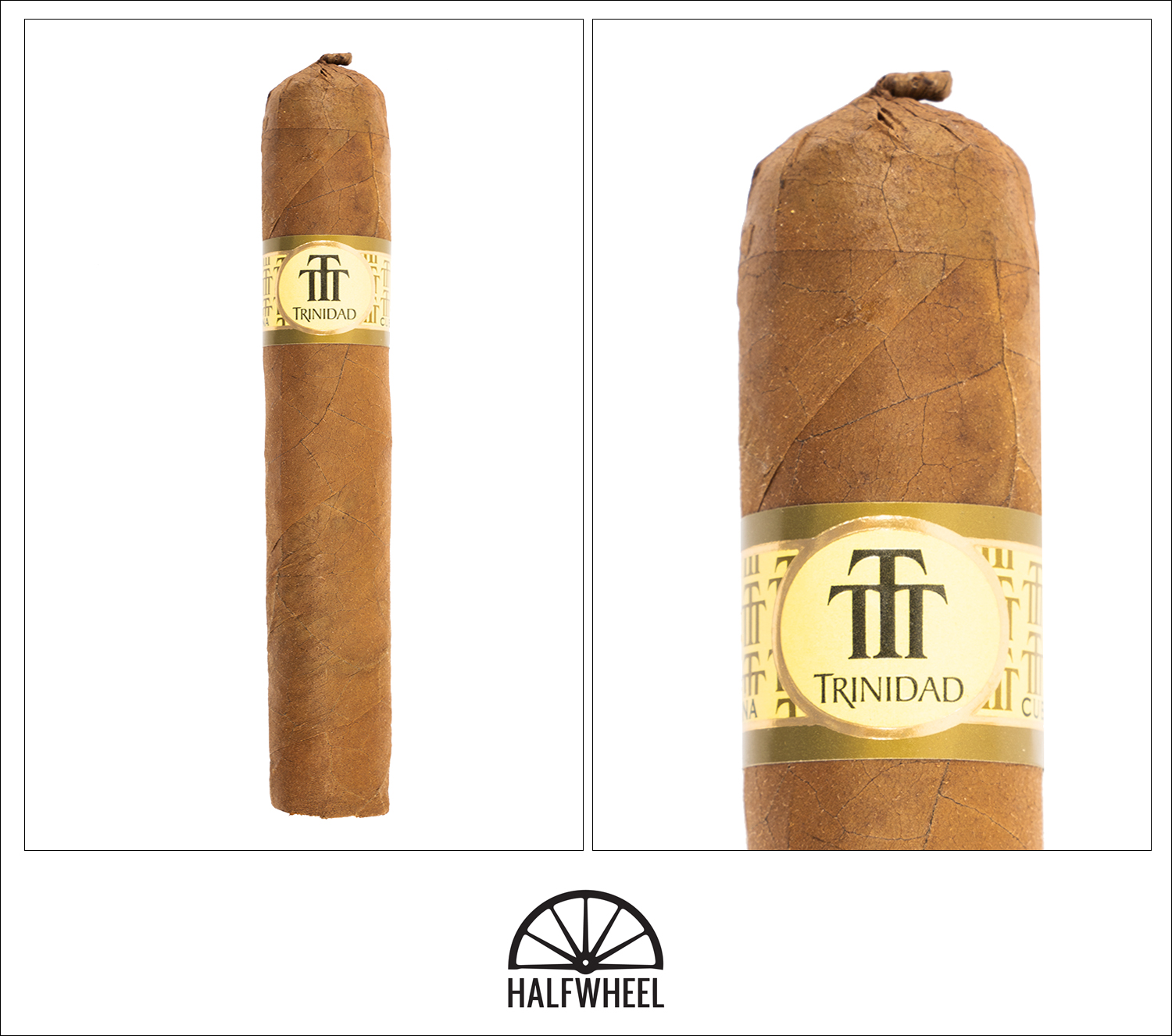 This cigar has a pigtail, something that I don’t seem to be encountering all that much of late but is a signature for the Trinidad brand. It has a decent color but upon any closer inspection the veins are pretty obvious and on one cigar there’s a water spot on the front of the cigar, something that shouldn’t happen as the person putting the band on should have oriented the logo it so that the watermark is on the back of the cigar, away from initial view. I’d venture to guess that these weigh below the average for this size, as all three feel a bit lighter than I’d imagine. The foot smells like the individual ingredients I’d use for oatmeal: the aroma of oatmeal itself as well as  brown sugar and some raisins. There’s also some sawdust, but it’s overshadowed by the other aromas. Cold draws have sweet candy, some barbecue notes, a touch of honey mustard and a bit of white pepper. Varying how much force I use to take a cold draw affects the flavor, as sometimes it just tastes like the floral and cedar mixture that defines most Cubans.

The Media Luna starts with layers of nuts to the point where it seems a bit mushy. There’s some creaminess behind the nuts but it does little in the way of helping to avoid the finish from drying out the mouth. The nuttiness departs after a few minutes and the profile shifts to a mixture of sweetness, woods and orange peels. I can detect that the Trinidad is young, as the flavors lack a certain crispness and there are signs of other flavors that just aren’t developed yet. Retrohales have a bit more refinement with a crisp apple, some lemon, white rice and white pepper. Flavor is nearly full, body is medium-full and strength is medium-plus. The draw varies—one cigar has a great draw, one has a slightly tight draw and a third has a tight draw—but otherwise construction is great with a ton of smoke production and a solid burn.

Things come alive quite a bit in the second third. The flavors from the first third get more intense and detailed, though outside of a return of the layers of nuts, there’s actually not anything new in terms of what I’m detecting in the mouth. But the story is much different for the flavors that I’m picking up through the nose. There’s an Oreo-like chocolate, nuttiness and leather. The finish is similar to the first puffs—tons of different nutty sensations—along with some butter-like cream and an acidic fruitiness. Flavor is full, body is medium-full and strength is medium-full. Construction remains the same as it was in the first third with one exception, the cigar that was sort of borderline tight has gotten worse and is now firmly in the tight category. Despite that, smoke production off the foot remains great and when I work for it, I can get plenty of smoke in the mouth. The Trinidad Media Luna gets a bit more interesting upfront, the nuttiness and sweetness are now joined by a generic earthiness, peanut butter cookies and black tea. Unfortunately, the flavors aren’t as detailed as I’d like them to be—certainly not as good as the second third—and the profile is starting to get harsher. Retrohales have nuttiness, some minor harshness, acidity and a watered-down red wine. The finish has a unique saltiness along with some more of the nuttiness—perhaps just a residual flavor at this point—and some white pepper. Flavor is full while body and strength are medium-full. The draws of the three cigars are as follows: good, tight, and tight. For the first time in the course of smoking the Media Luna, I’m forced to touch up the cigar due to both an uneven burn line and declining smoke production. Every year when our Top 25 gets published someone asks why there aren’t more Cuban cigars. As I’ve explained before: we review new cigars and many people that love Cuban cigars will tell you that Cubans need to rest for a period of time before they can be enjoyed at their best. I’d say that’s fair to describe most of the new Cuban cigars, particularly when you remove the higher-end releases like Reservas and Gran Reservas. The Trinidad Media Luna definitely has signs of that youthfulness but the flavor is complete enough to compete with the best cigars of any given year. The other problem that people will love Cubans will tell you is that consistency and construction are also problems. Two of the Trinidad Media Lunas struggled due to poor construction—one with a tight draw that won’t improve with aging—and as such, this cigar likely won’t be considered as one of our best new cigars for the year. All that said, this is my favorite new regular production Cuban I’ve smoked in a very long time. Whether it ages to greatness remains to be seen but the bigger question for me is whether Habanos S.A. decides to keep Trinidad around or ax the Media Luna and the rest of the vitolas in five years' time.