In 2019, Altadis U.S.A. announced the first blend in a brand new three-part series to celebrate the 50th anniversary of the Trinidad brand, each of which is inspired by a different country. The first addition was the Espiritu No.1, a Nicaraguan puro packaged in boxes adorned with bright and colorful art inspired by Havana, Cuba in the 1960s.

One year later, the company announced the follow-up release in the series, appropriately named Espiritu No. 2, a five-vitola line inspired by Brazil. As with the first release, the regular production cigar is being made at Abdel Fernández’s Tabacalera AJ Fernandez Cigars de Nicaragua S.A. factory in Nicaragua.

Blend-wise, the Espiritu Series No. 2 a Brazilian Arapiraca wrapper over a Nicaraguan binder and fillers from Brazil and Nicaragua. Each of the five sizes is packaged in boxes of 20 that began shipping to retailers in February. 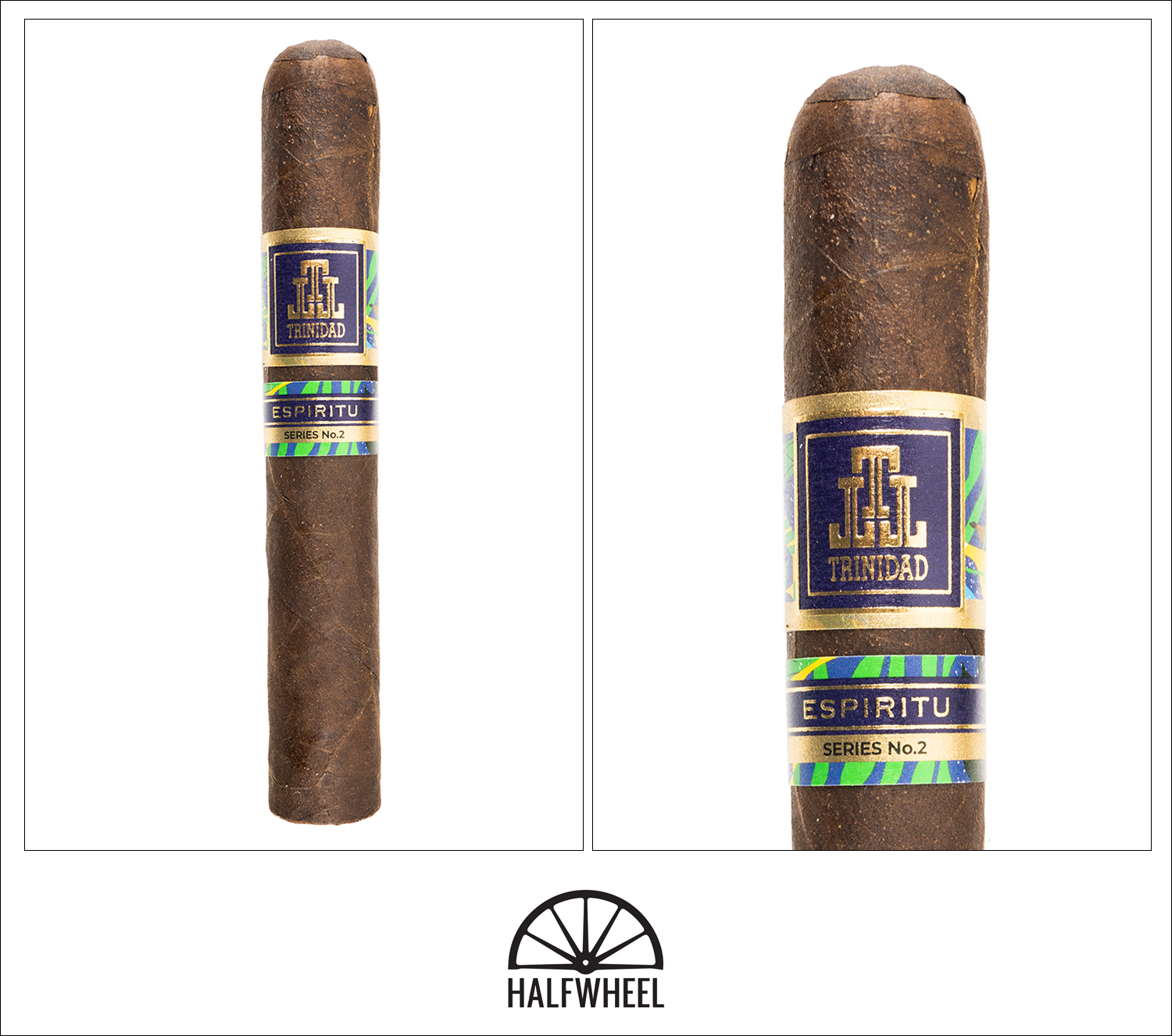 The wrapper covering the Trinidad Espiritu Series No. 2 Toro is a pale, dark espresso brown color that features numerous major veins running up and down the length along with some obvious sandpaper roughness. One sample has a massive soft spot just under the secondary band and seems a bit underfilled, but all three cigars show quite a bit of oil. Aroma from the wrapper is a combination of sweet earth, barnyard, pepper, leather, oak, generic nuts and raisin sweetness while the cold draw brings flavors of gritty earth, dark chocolate, coffee beans, leather and cereal along with some fairly aggressive black pepper.

There is plenty of both black pepper and spice in the profile of the Trinidad Espíritu Series No. 2 Toro just after I toast the foot—albeit not quite enough to call overwhelming—and both begin to recede a bit after about 10 puffs. As the aforementioned spice and pepper begin to fade, I begin tasting more obvious flavors of strong charred meat and gritty earth, followed by secondary notes of espresso beans, creamy oak, dark chocolate, peanut shells and a touch of grain cereal. Due to the still aggressive black pepper that is still present, I can barely pick up a raisin sweetness note on the retrohale, while the finish has a light metallic flavor that pops in every once in a while. Construction-wise, while the draw gives me no issues at all, the burn gives me some minor issues out of the gate, leading me to touch it up twice in succession. The strength level starts out well past the mild mark and ends the first third on the path to medium.

While both the black pepper and spice that were so aggressive during the start of the Trinidad have died down somewhat as the second third begins, they are still a major part of the profile, and the main flavors of charred meat and earth easily remain in the top spot. Lesser notes of oak, cocoa nibs, coffee beans, leather, hay and a touch of vegetal flit in and out, while the metallic note on the finish seems to be kept at bay as long as I don’t go crazy with the puff rate. The black pepper note on the retrohale is still present as well, but it has become noticeably reduced meaning I can taste more of the raisin sweetness. The draw continues to impress with just the right amount of resistance after a straight cut and the burn has evened up nicely, and while the strength increases enough to come close to the medium mark it ultimately fails to cross over before the second third comes to an end. Unfortunately, there are just not many major changes during the final third of the Espíritu Series No. 2: the profile continues to be topped by a combination of charred meat and earth, while additional notes of peanuts, leather, dark chocolate, oak, hay, espresso beans and vegetal bring up the rear. Both the black pepper on the retrohale and the spice on my tongue are still noticeable, but at levels significantly under where they were in the first two thirds, which in turn allows a bit more of the raisin sweetness on the retrohale to emerge. In terms of construction, the draw remains fantastic, but the burn has minor issues once again that result in some attention with my lighter. Finally, the strength level passes the medium mark to end at a stronger medium by the time I put the nub down with a little more than an inch remaining. Earthy and woody with a distinct charred meat flavor thrown in for good measure, the Trinidad Espíritu Series No. 2 Toro is one of those blends that is enjoyable enough, but unfortunately, the lack of any significant sweetness—either on the palate or the retrohale—really holds the entire profile back. In addition, there is a metallic bitterness that shows up on the finish every once in a while, a note that only gets more pronounced if I puffed too hard or too fast. Construction was decent but the original Espíritu blend is the best in the small series so far.