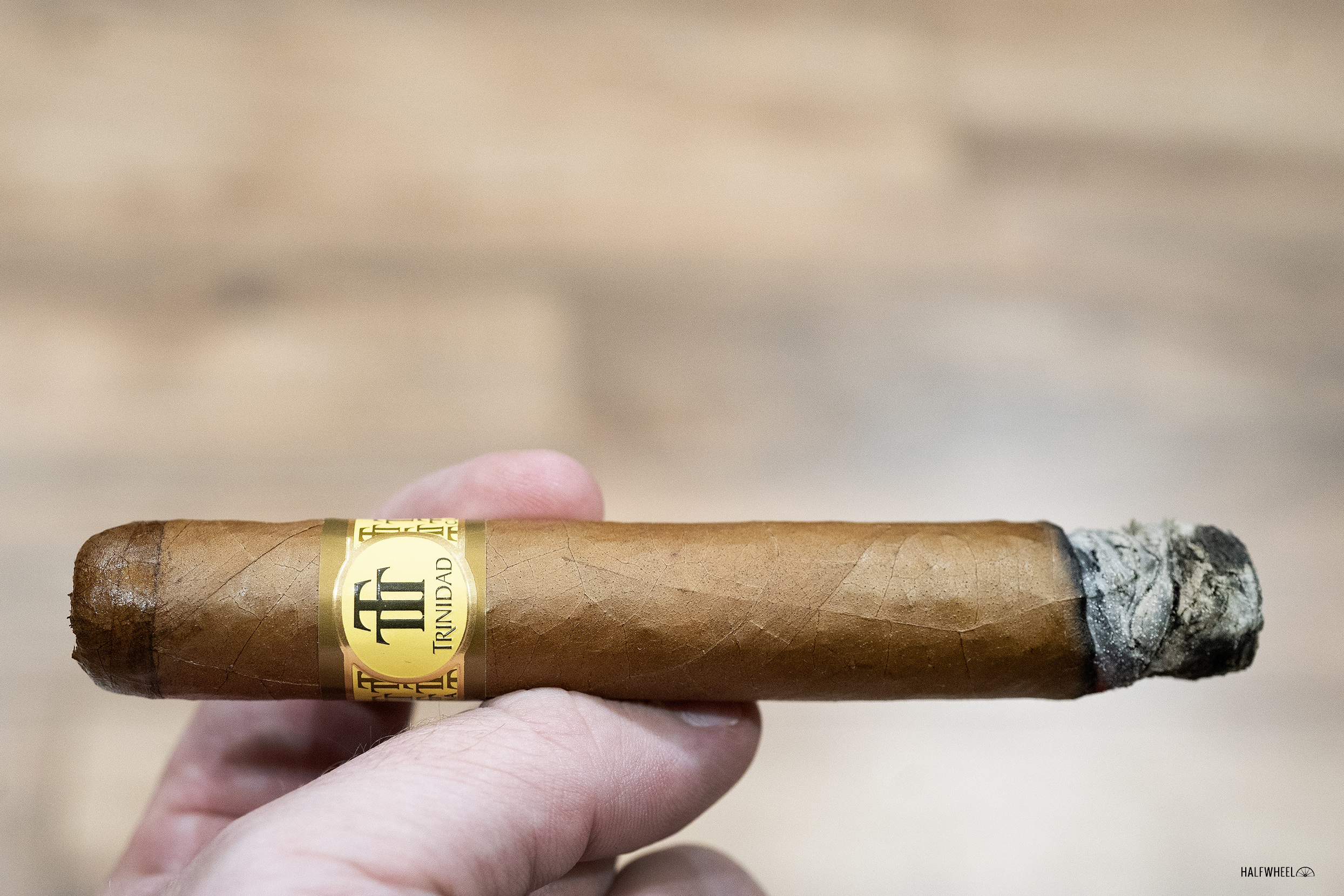 If you follow Habanos S.A. news, and specifically the featured brands of each Festival del Habano, you know that the Cuban cigar conglomerate can do some pretty impressive things for one of its marcas when the time is right. In 2019, the spotlight was on the Trinidad brand, which was marking its 50th anniversary and thus had five new and special cigars planned for it.

Trinidad was selected for the 2019 Colección Habanos release, the limited edition series best known for being released in boxes designed to look like classic books. The cigar that was crafted for that release was the Trinidad Casilda, a 7 2/7 (185mm) x 53 parejo.

There was also the Trinidad 50 Aniversario, the first figurado release for the brand. It measures 6 1/10 (155mm) x 59 and is only offered in a humidor of 50. The first of those humidors were auctioned off during the Festival del Habano XXI, with the remaining 99 humidors offered to distributors, though by all accounts the cigar has yet to show up at stores. 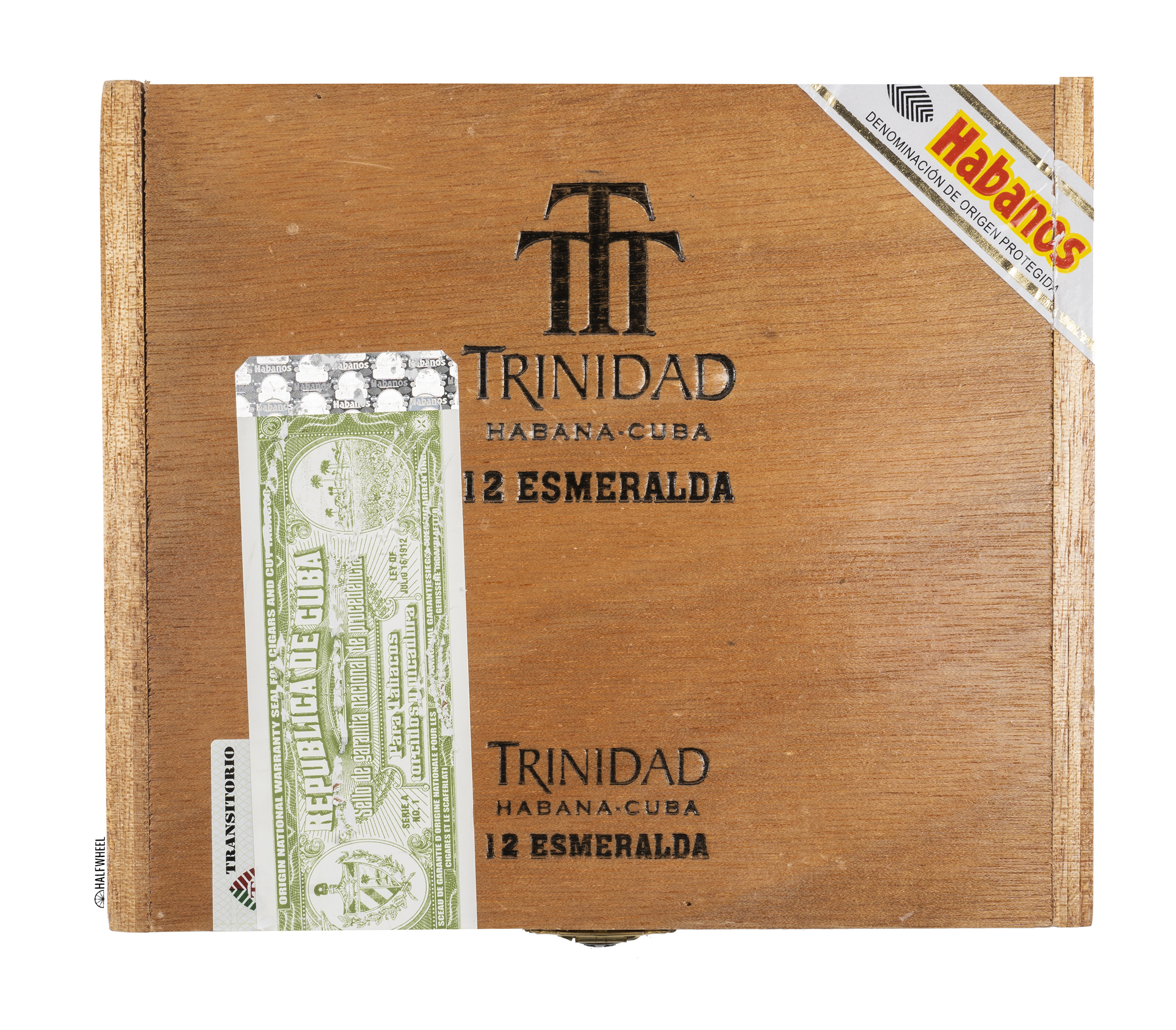 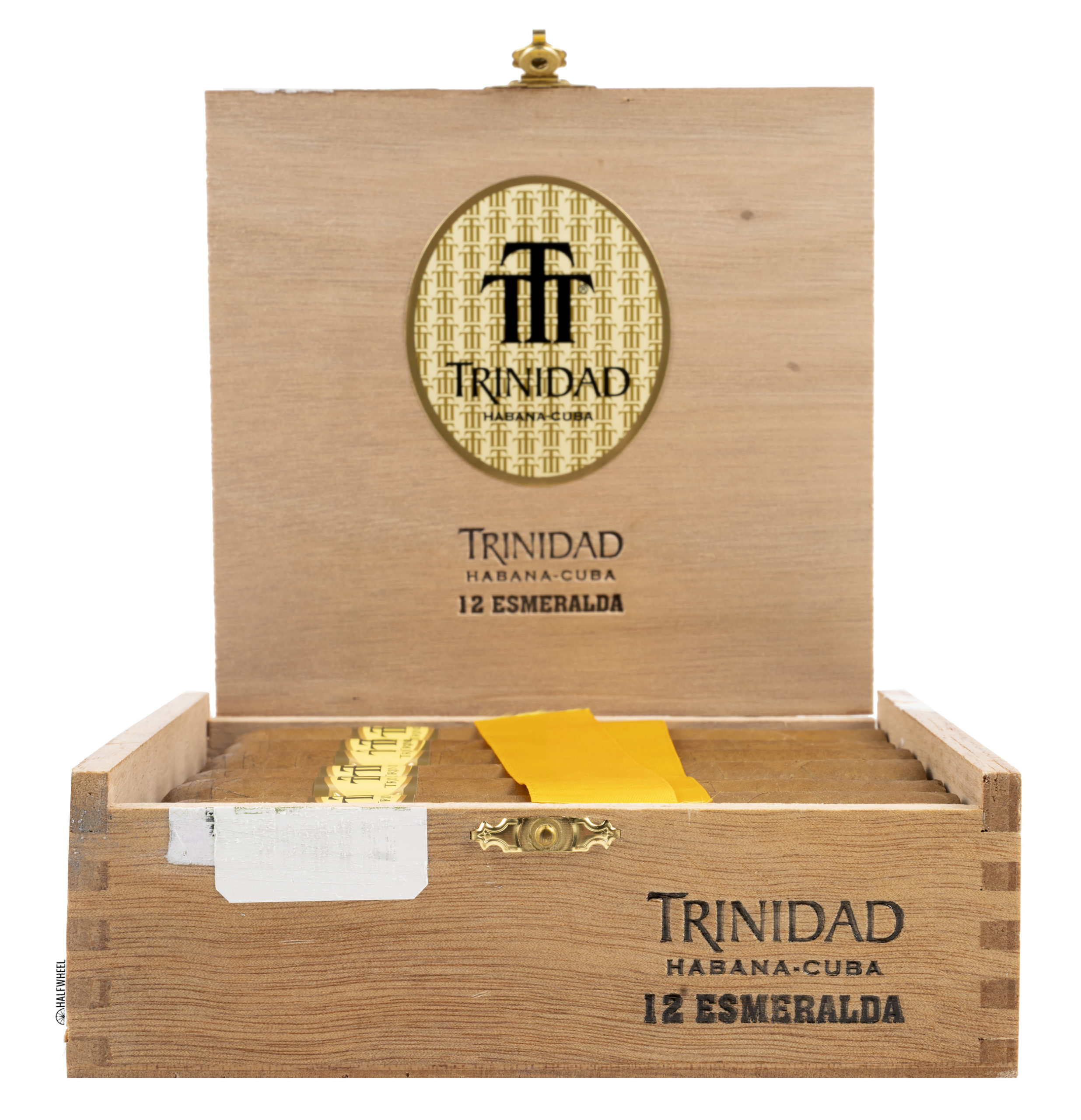 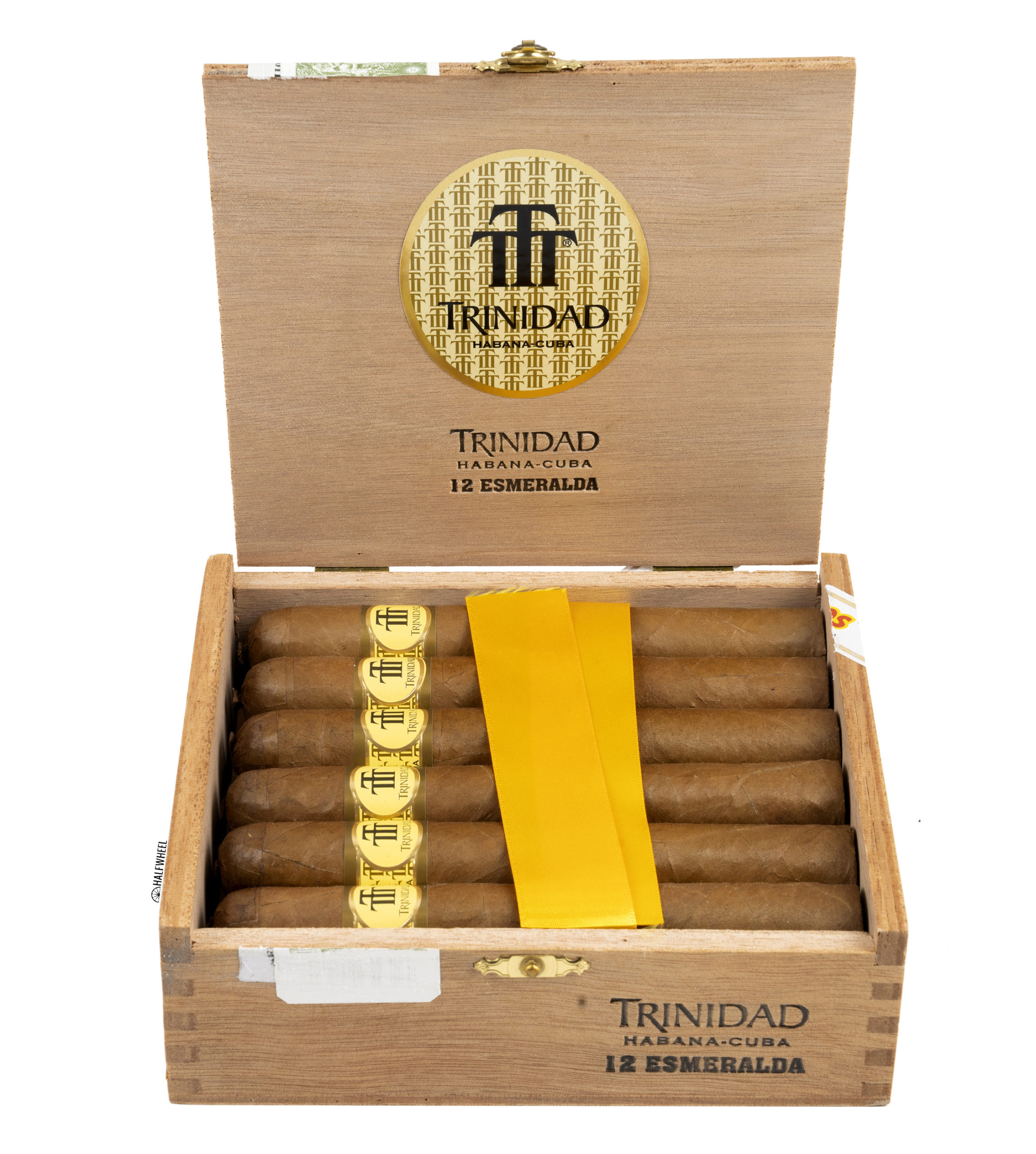 The Esmeralda was the last to arrive, hitting Swiss retailers in December 2019. It’s notable for not only being a fairly thick cigar, but also for offering a new vitola to the Habanos S.A. portfolio, one known as the Dinoras. The same was true for the other two cigars, as the Media Luna comes in a vitola called the Marinas, while the Topes uses that name for the vitola as well. It is also worth noting that the Topes had previously been an Edición Limiitada release from 2016.

In keeping with the Trinidad marca’s general packaging format, the three new regular production sizes are all released in 12-count boxes, with the cigars arranged in two rows of six. 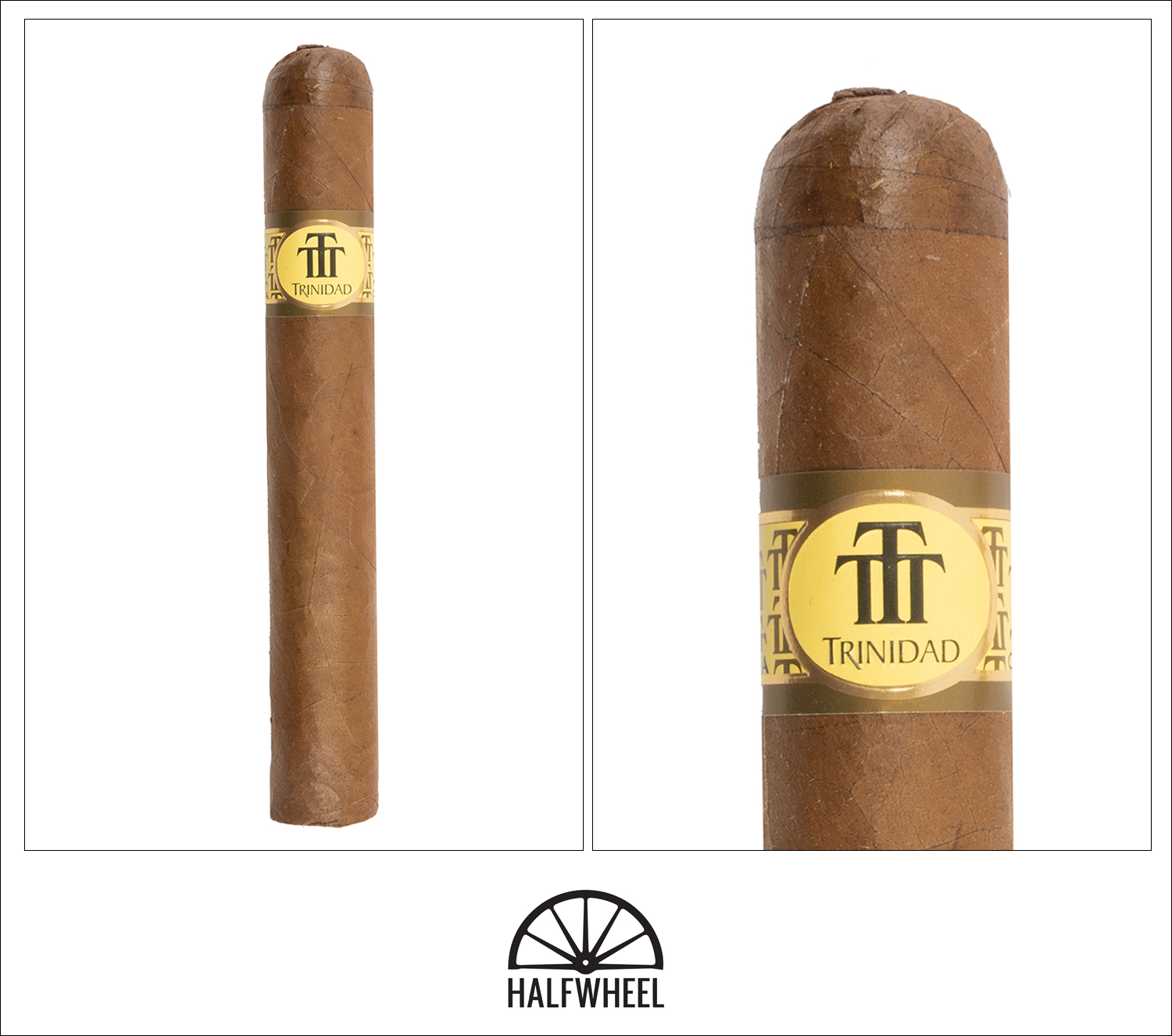 Having smoked a good number of the 40 ring gauge Reyes vitola, the 53 ring gauge of the Esmeralda feels both bigger than it probably is and also a bit foreign for a cigar wearing the Trinidad band. The cigar sports a fairly oily, supple wrapper that has a bit of texture to the fingers, though one sample is quite a bit less oily than the others. Each wrapper is well tanned, even in color, and has some of the familiar vein structure and texture for which Cuban cigars are known. There is a bit of give, far from spongy yet not overly firm, but it appears to be rolled well and finished by a very small fantail cap that can be laid flat without much effort or damage. The foot offers aromas of bread, a bit of cereal, some cream sweetness and no real pepper. One sample has a toasty finish that provides some tingle, but also a bit of orange soft serve spin to the sweetness. The cold draw is surprisingly good with airflow across the samples, offering no restrictions and only a bit of a slower pace of movement. There is a bit of pepper in the flavor but the overall offering is still mild, with a bit of uncooked—or undercooked—pizza dough the most standout aspect, while there are occasional appearances by white toast, dry wood and a generic dry tobacco leaf flavor.

The first puff of the Trinidad Esmerelda starts with a good amount of toasty pepper, but it quickly backs off from thoughts of a big, pepper-laden start. There’s a creamy texture to the smoke, even if I’m not getting much in the way of the corresponding flavor. It’s a bit dense out of the gate, save for some mild but noticeable pepper on the retrohale, which is where I also find a bit of orange rind. There’s no harshness or anything that would suggest much youth, even though the cigars have a box code that is just about 15 months prior to my smoking them. Just as I am about to take the first photo, the aroma picks up a ton of white pepper, getting bright in my nose right before I look through the viewfinder. It was also fortunate as the ash dropped off about 30 seconds after the picture was taken. The ash dropped off at nearly the same point and with the same lack of warning as the first cigar. I must note that this is a cigar where the retrohales add a lot to the experience and work well with the flavor, With so much creaminess in the first third, flavor checks in around medium, though the pepper can spike it up at times and if you retrohale frequently make the combination more medium-plus. Body is medium-plus while strength is medium-minus. Construction is generally very good, though the draw occasionally feels a bit soft.

If there is one place where the Trinidad Esmeralda seems to shine, it is on retrohales. While the flavor may be a bit muted at times, after that first clump of ash drops off the retrohales have come alive. Speaking of the flavor, it continues to be a fairly mild combination of creaminess, white toast and subtle black pepper, which seems a bit off from the somewhat stronger profile I have associated with Trinidad and leads me to wonder if the added filler might be mellowing things out. Around the midpoint, the cigar picks up a bit of a campfire aroma as the toast turns into a smoky, woody combination while also showing a bit of warm mixed nuts. There’s also a shift towards black pepper, which starts the suggestion of some charred wood. Much like at the start of this section, I find myself retrohaling a bit more than normal in an attempt to liven up the overall profile. Pepper through the nose now shows a bit more youthful vibrance, which is enjoyable for a bit before getting just a bit too vibrant. It also has the effect of making the overall profile seem to not be quite as enjoyable as the flavor gets just a bit out of balance, as well as the flavor getting off by way of a hint of sourness. Flavor is a vibrant and light medium to medium-plus, while body and strength are just shy of medium. Construction has been very good, with an even burn line, good smoke production and no issues with combustion. 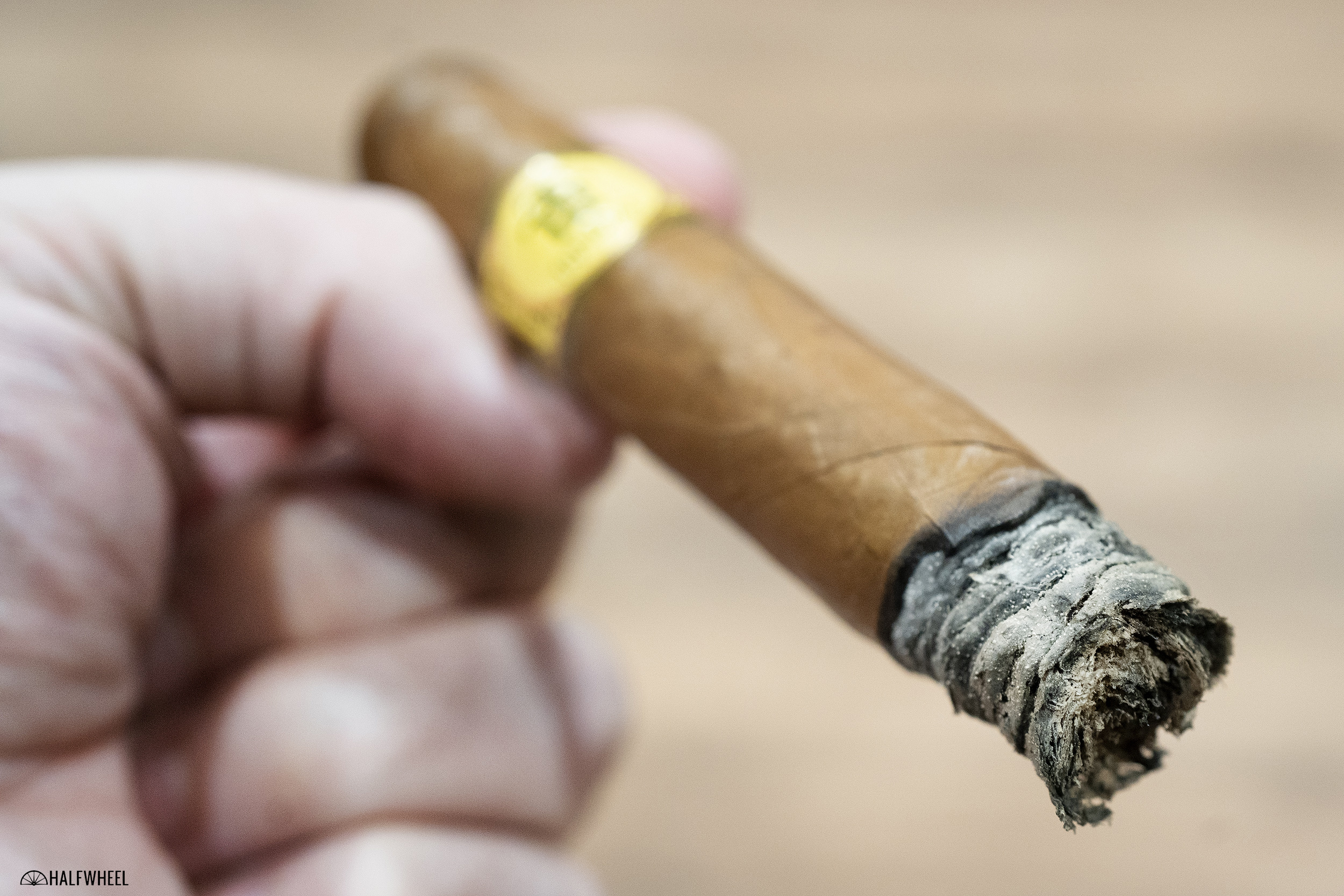 If there’s one thing that’s consistent about the Trinidad Esmeralda, it’s that by the time the cigar gets into its final third I find myself wondering why the cigar hasn’t yet offered more depth and variety in its flavor. That’s not to say that it hasn’t offered anything—far from it, in fact when thinking about the recent campfire profile—it’s just that the rest of the profile comes across as a bit underdeveloped for the better part of the cigar. That’s something that could certainly be a byproduct of its relative youth, or as I wondered earlier if the thicker ring gauge is diluting things a bit. While the intensity and vibrance have been on a steady descent of intensity since the midpoint, the one exception is the development of somewhat grating sensation on the palate and throat, a rough and rocky texture that has taken over as the time comes to remove the band. Creaminess begins a slow return to the profile by way of retrohales, giving that expression its thickest texture thus far. Fortunately that harshness fades away enough so that the cigar can be smoked down to well within an inch of the head, providing only a challenge of keeping my fingers from getting burned. Flavor finished medium-plus, body bumps back up to medium-plus, and strength hangs around the medium mark. Construction remains very good, with the burn line getting slightly wavy for a bit before self-correcting. 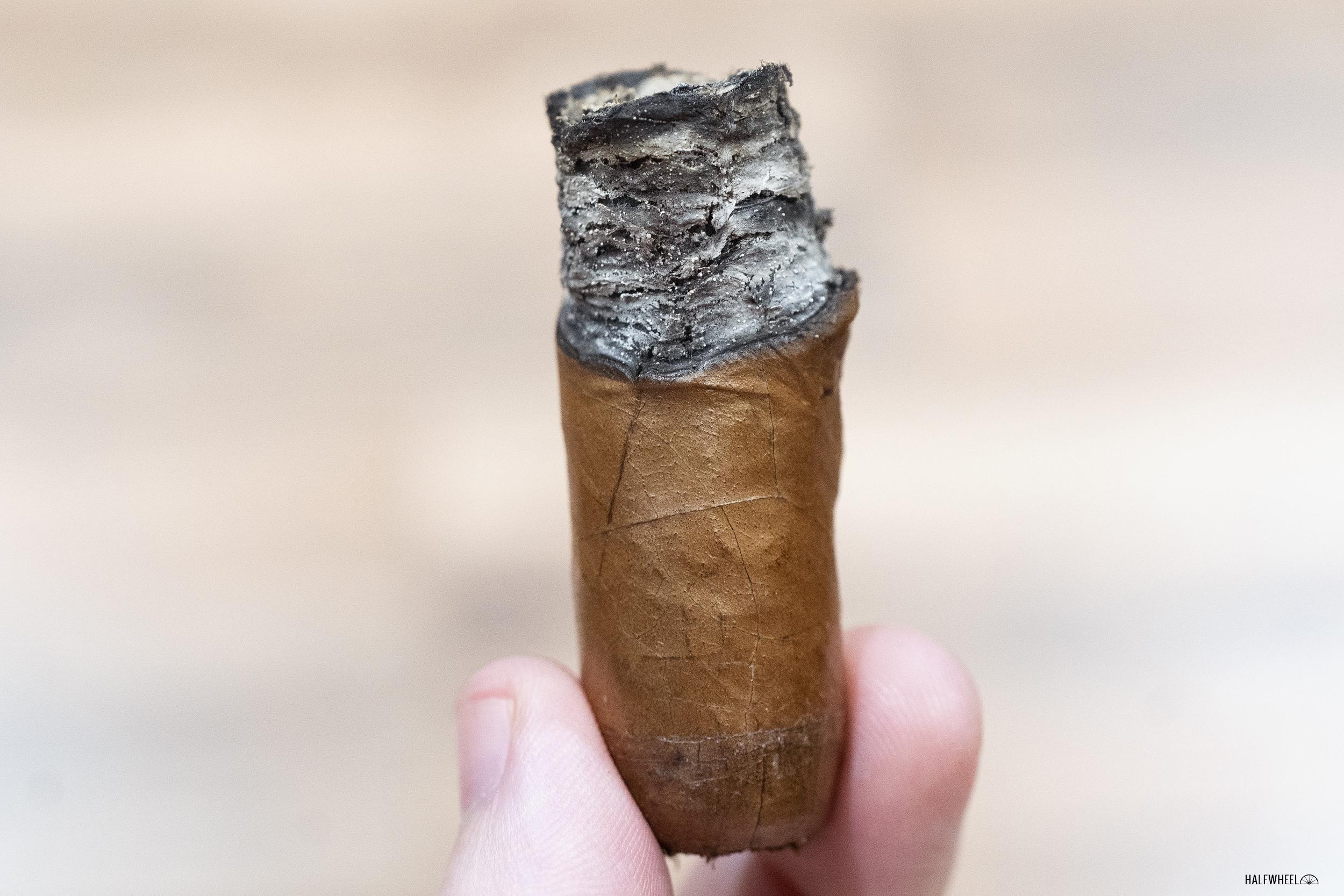 As noted above, I have smoked a good number of the Trinidad Reyes cigar, a petit corona that I found perfect for short drives or whenever I just wanted a flavorful cigar in a smaller format. With its thicker ring gauge, the Trinidad Esmeralda seems to have softened the profile that I remember from the Reyes. The one exception to that is the second third, where a glorious campfire smokiness that is rich with pepper, wood, a bit of char and a smoky aroma easily lifts the cigar out of the realm of "this is okay" to "this could be something really good." I'm hopeful that with some more time and rest, the Trinidad Esmeralda will not only further develop that flavor but that the first and final thirds will rise up to be on par with the middle section. Should that happen, this could be a very appealing off-the-shelf option for Trinidad fans—or anyone with access to Cuban cigars—to consider.