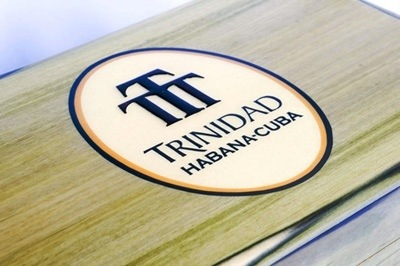 December 6, 2010 — Habanos, S.A. is proud to present the Trinidad Humidor specially conceived to mark the 40th anniversary of the brand. Made of cedar and majagua with its characteristic green colour, and reproducing the brand logo on the top made of precious Cuban woods, this case is a masterpiece that has resulted from the expert hands and great skill of Cuban craftsmen. Trinidad is named after the beautiful 16th Century city of La Santísima Trinidad (The Holy Trinity), listed by UNESCO as a historical monument, which is situated on Cuba’s south coast.

Trinidad, as a Habano, dates back to 1969 but for many years, like Cohiba, it was made only for gifts to foreign diplomats. Not until 1998 was it released for general sale.

All Trinidad sizes are totally hand made, long filler and they are manufactured with the best leaves that comes from the best crops of the Vuelta Abajo region.

Trinidad is characterized by its exclusivity and somehow became a brand chosen by those who wish to differentiate themselves from the rest. Having chosen a successful format very much appreciated by Habanos enthusiasts (ring gauge 52 x 150mm) but with its characteristic pigtail, and a production limited to only 400 humidor cases, results in a very exclusive item for the devotees of the brand and its aromatic taste. The Trinidad 40th Anniversary Humidor will be available in the coming weeks at La Casa del Habano shops worldwide.