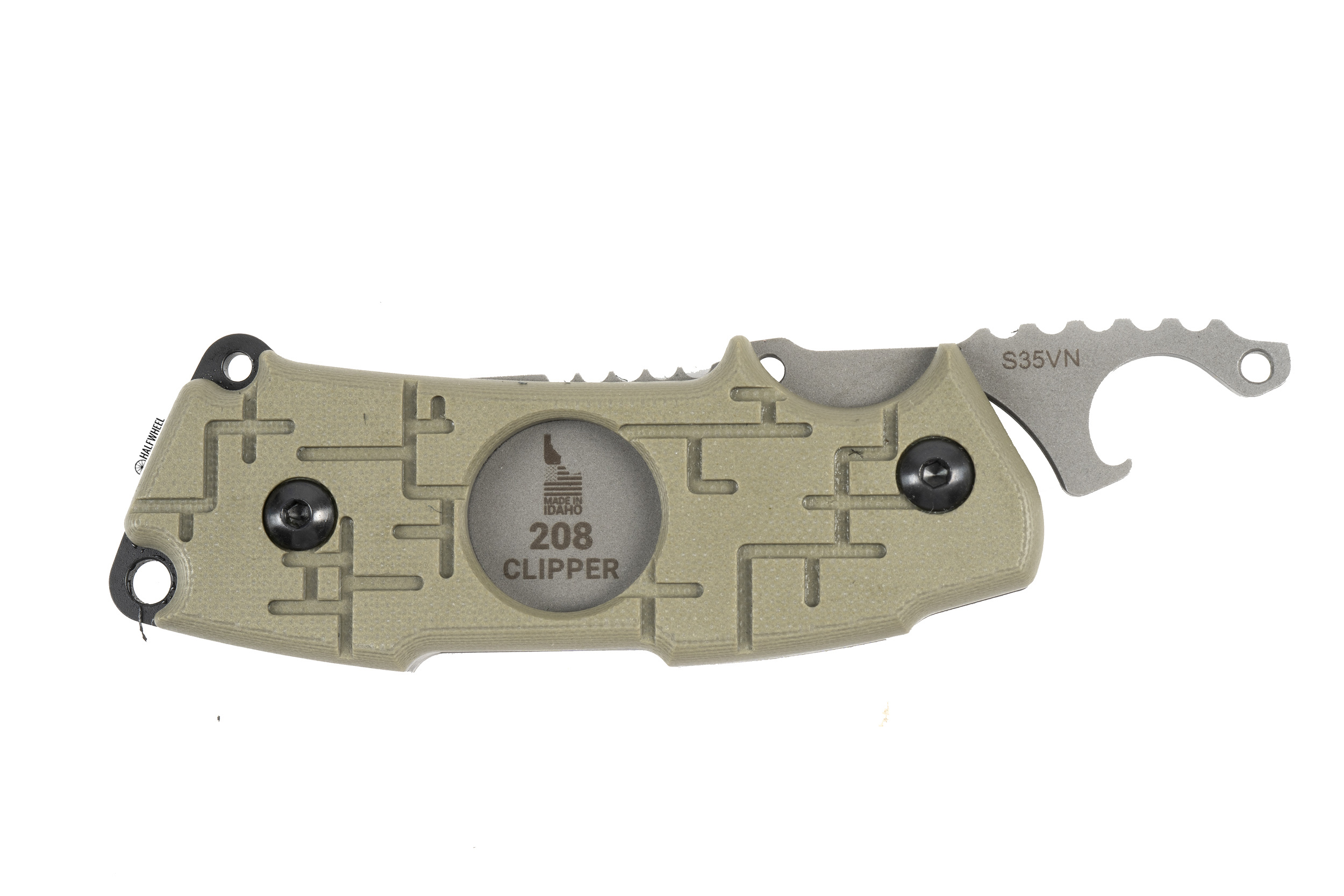 Founded in 1998, TOPS Knives currently produces more than 200 different knives that are used not only by the general public, but also members of law enforcement and various branches of the military. The company’s founders—all of whom served during the Vietnam War—started the brand to produce knives that did not have the issues with durability and strength that were rampant with the blades issued to soldiers during the war.

In early 2019, TOPS Knives showed off the early version of a brand new product that the company had been working on. Designed by Leo Espinoza, TOPS president, the new creation was one product with three different and distinct functions: a friction folder Tanto-style knife, a guillotine-style cigar cutter and a bottle opener.

Fast forward 18 months to June of this year, when the final incarnation of that prototype was released. Now named 208 Clipper, the new product combines a cigar cutter with a folding knife and the aforementioned bottler opener.

Based on the design of the company’s first-ever creation—the Steel Eagle 107D—the 208 Clipper is a single blade guillotine cutter that also functions as a knife. According to TOPS, the 2.25-inch Tanto-style blade is made of CPM S35VN steel with black Cerakoted liners—a process that involves adding a liquid ceramic coating which is either air-dried or dried with an oven—while the exterior is constructed of OD Green G10 plastic knife handle material, which is “a high-pressure fiberglass composite laminate made by stacking layers of glass cloth, soaking them in epoxy resin, and then compressing them under high heat.”

In terms of physical specifications, the 208 Clipper weighs 4.7-ounces and measures 5 inches when it is closed, with an overall length of 6.13 inches when it is fully open. The blade on the cutter measures .09 inches thick and the knife is sold with a belt loop clip-equipped double-stitched black leather sheath.

In addition, the knife features a round opening cut out of the middle of the handle that allows the blade to act as a cigar cutter. The diameter of the cigar opening measures exactly 20mm (.79 inches), meaning that you can cut a 50 ring gauge cigar completely in half, although I was able to cut enough of the cap off of cigars up to 60 ring gauge to smoke them with no issues. 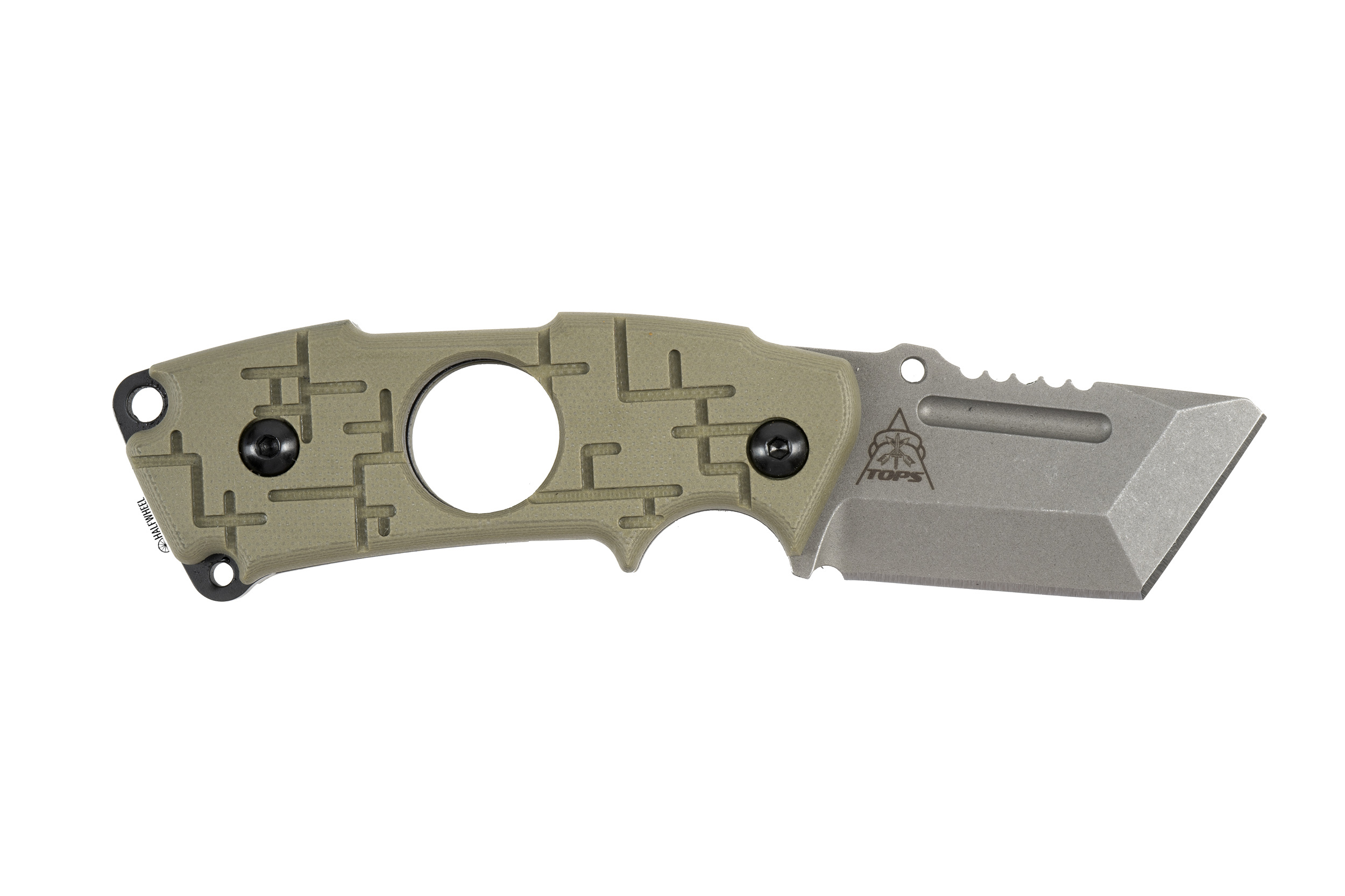 $230 is the official price, though I was able to find it for as little as $159.95 online. The price includes a belt loop clip-equipped double-stitched black leather sheath.

As with the vast majority of products in the cigar/knife category, you open the TOPS Knives 208 Clipper Cigar Cutter by pushing down on a lever built onto the end of the blade, which in this specific cutter’s case, also functions as the bottle opener. When the blade is fully extended, that lever disappears into a position inside the base, leaving a very thin footprint. At this point, you can use it as you would a normal knife, but because the piece of the blade that includes the bottle opener disappears when the blade is fully extended, that particular function cannot be used when the blade is open.

The process of cutting cigars when using the TOPS Knives 208 Clipper will be very familiar to fans of this specific style of cutter: after opening the blade as described above, you place the now open cutter in your right hand with your thumb on the edge of the blade while the handle is cradled in your palm. This position not only means that the blade is facing away from you, but it also puts the beveled edge facing to the right, while the “208 Clipper” logo is facing to the left.

Holding the cigar in your left hand, you then place the cigar cap into the opening—making sure that the smaller cap end that is being cut off is on the same side as the beveled edge of the blade as described above—and start cutting by pushing down on the edge of the blade with your thumb slowly, which pushes the blade through the cap where it sticks nicely when it comes to the end of its journey.

When cutting cigars, you can actually use the TOPS Knives 208 in either your right or left hand, although the process for each hand changes slightly. The key is to always have the cigar facing the same way in relation to the blade so that the cap—i.e., the end that you are cutting off—is facing away from the blade with the beveled edge.

Interestingly, while I saw very little difference in the cuts I got when using the cutter in both my left and right hands for the Les Fines Lames Le Petit, the TOPS 208 Clipper was less awkward and performed better overall when held in my right hand, perhaps due to the amount of pressure needed to push the shorter, stubbier blade closed. 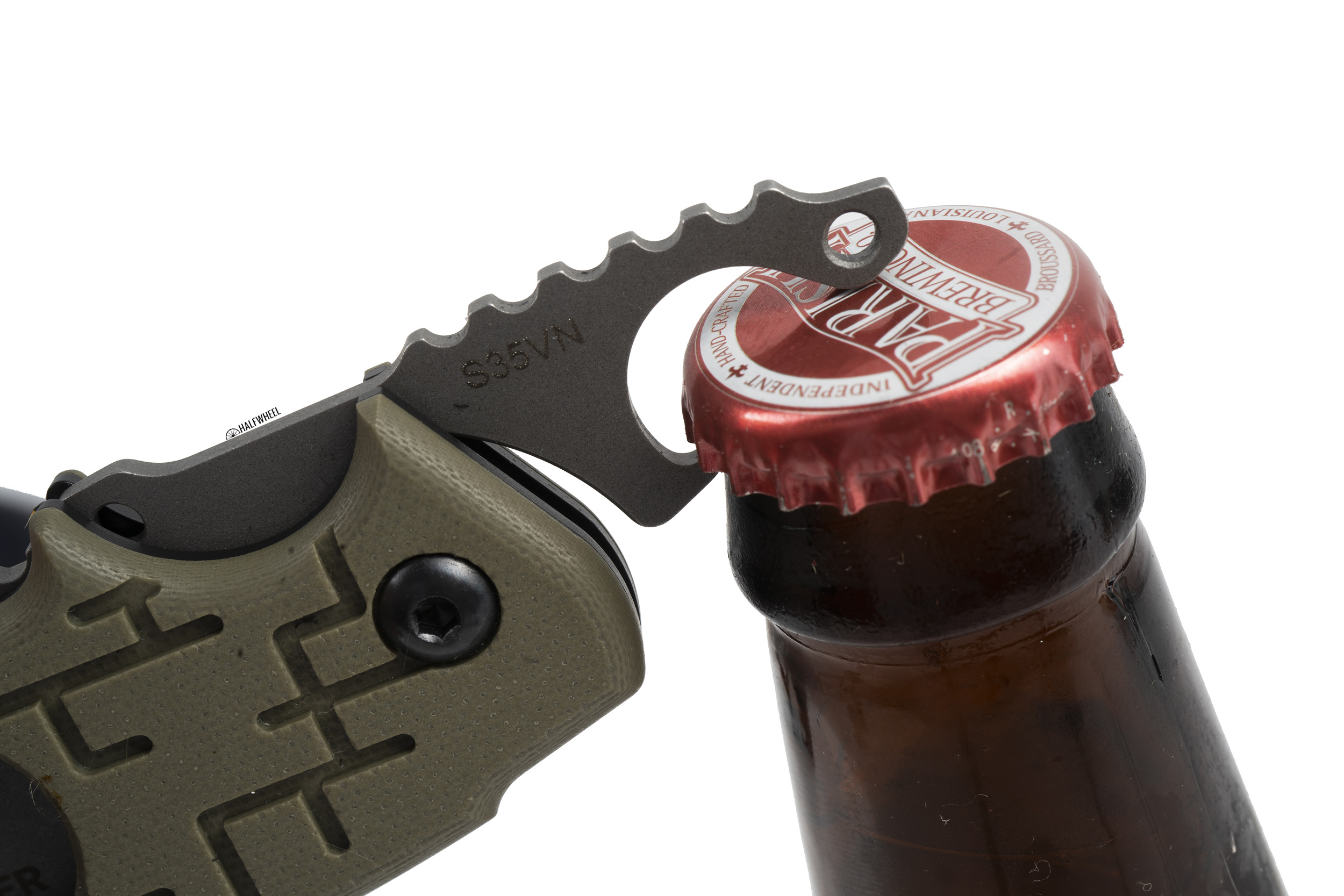 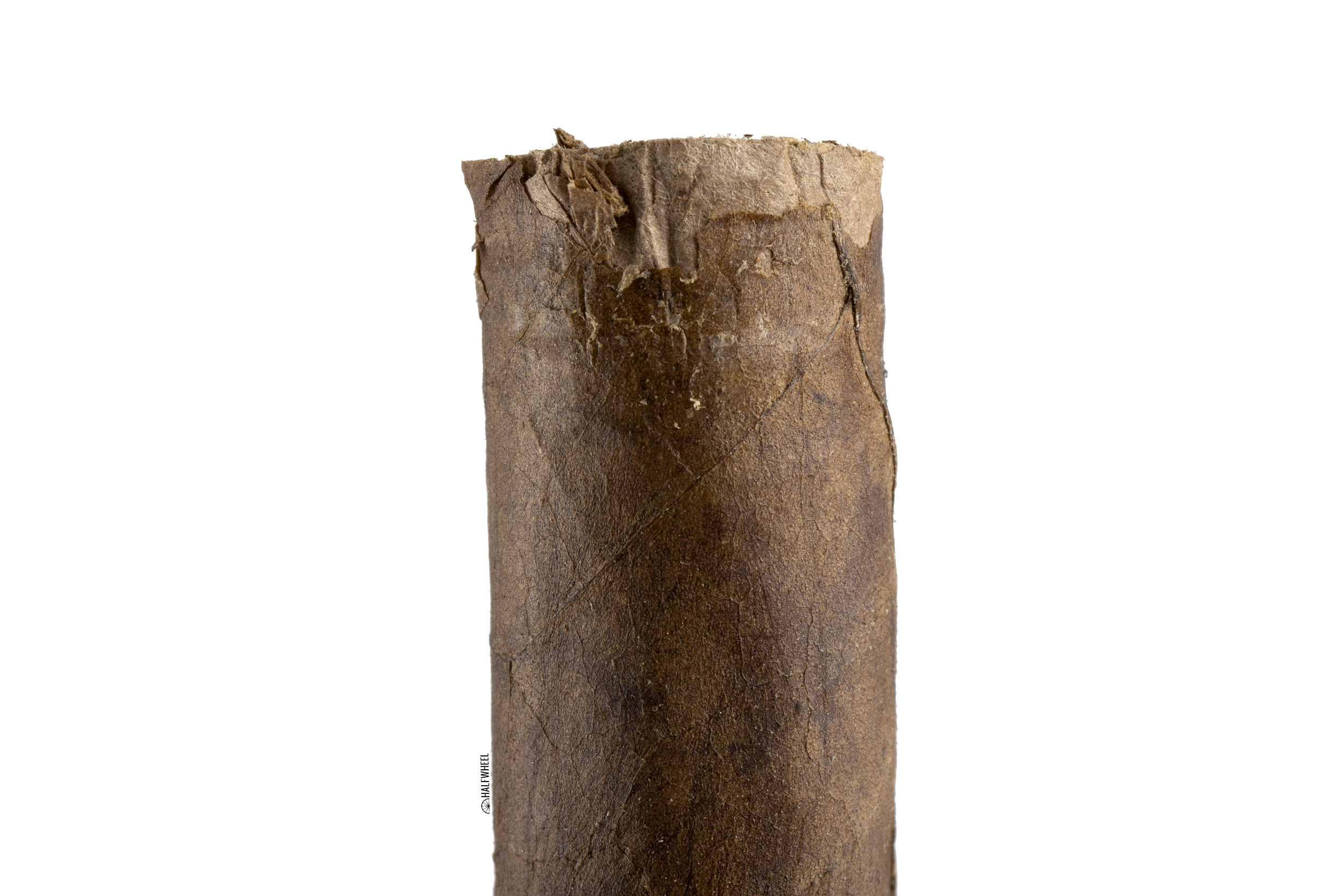 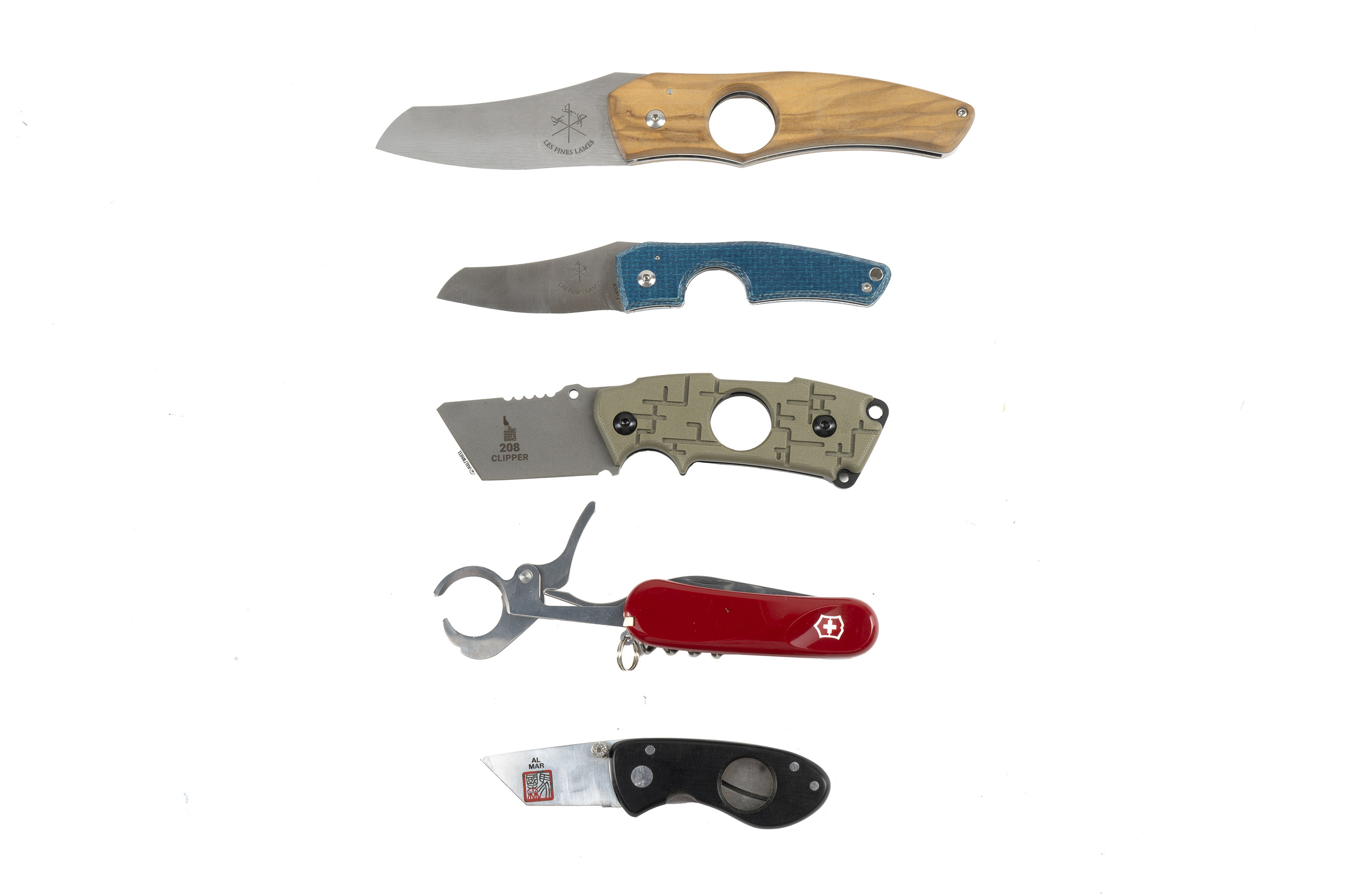 Competitors in the “Knives that can also be used as a cigar cutter” range are not exactly rare, and the most obvious when comparing the TOPS 208 Clipper is the Benchmade 381 Aller Fumée, which comes in at a very similar price of $160. It also cuts up to 58 ring gauge cigars and features an exterior made of Richlite—a material made from layering recycled paper and then applying resin—but does not include a bottle opener like the TOPS 208. 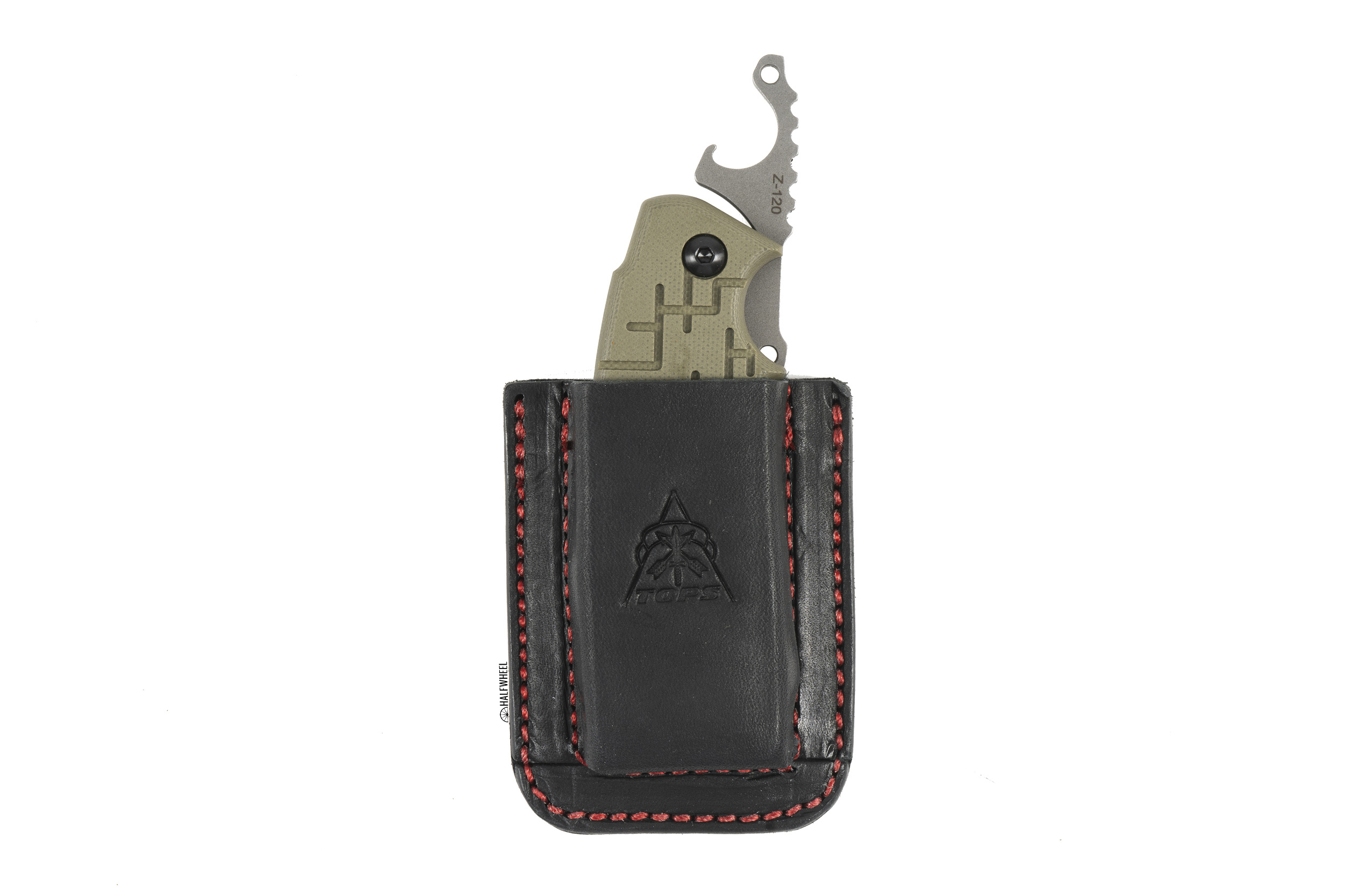 After reviewing three of them so far, I have found very little evidence that any company has perfected the cigar knife, and the TOPS Knives 208 Clipper Cigar Cutter is just the latest example of that trend. Putting aside the very functional—and surprisingly useful—bottle opener, the question about whether this knife passes the test of being able to actually cut cigars cleanly on a consistent basis without damaging them is an easy one to answer in the negative. In fact, the results of my month-long test conclude that although the rugged and durable exterior makes it an ideal candidate for being used in more rugged conditions, it is clear that this is meant to be used as a knife first while also being capable of lopping the cap off of a cigar every once in a while. Occasional outdoor-type smokers looking for a knife + cigar cutter with the most functionality could do a lot worse than the TOPS 208 Clipper, but anyone who wants to use this as their primary cutter should stay away.