At the 2016 IPCPR Convention & Trade Show, Island Lifestyle Importers showed off some of its latest products, which included new cutters, lighters, cigar cases and ashtrays, as well as actual cigars. As the exclusive manufacturer and distributor of Tommy Bahama cigar accessories, one of the products the company showed off was the Tommy Bahama Signature & Marlin Cigar Cutter, a double guillotine cutter made with 440 German stainless steel blades that is capable of cutting up to 64 ring gauge cigars.

The cutter features a new patent pending Accu-Body-Cast-Design, which enables the company to print, engrave and create three-dimensional full color features that are actually built into the body design of the cutter. Measuring 1 3/4 x 3/16 x 2 3/4 inches and weighing 3.3 ounces, the cutter is available is two different body styles, both of which retail for $75. The Tommy Bahama Signature & Marlin Cutter features a dark blue logo as well as a light pastel purple background and chrome accents while the Cigar Band Logo features a black background with a large raised logo of a marlin. In an email with halfwheel, Ryan Frailing, vp of development for Island Lifestyle Importers, explained the thought process behind the design of the cutter:

The form of the cutter was designed for a “four finger” control system.  The top, bottom and side wings were built with slightly concave indentations to provide the user with maximum control when cutting.  By gripping all four sides, equal force is being applied during the cutting process to ensure maximum stability and control when cutting (especially) larger gauge cigars.   It may feel a little unusual at first but the end result of the cut is fantastic.

Visually, the Tommy Bahama Signature & Marlin Cigar Cutter looks extremely similar to the now discontinued Colibi Slice, with two blades that travel independently on tracks, triggered by a knob that is located on the bottom half of the casing on the front side. Both handles feature the Tommy Bahama name stamped into them, while the main body includes both raised logos and a leaf design on the background that instantly reminded me of the Zino Graphic Leaf Cutter, although the Tommy Bahama version does not cover up the entire exterior of the cutter. In addition, when I inspected the design of the background, I realized that the design was exactly the same on both the front and the back. 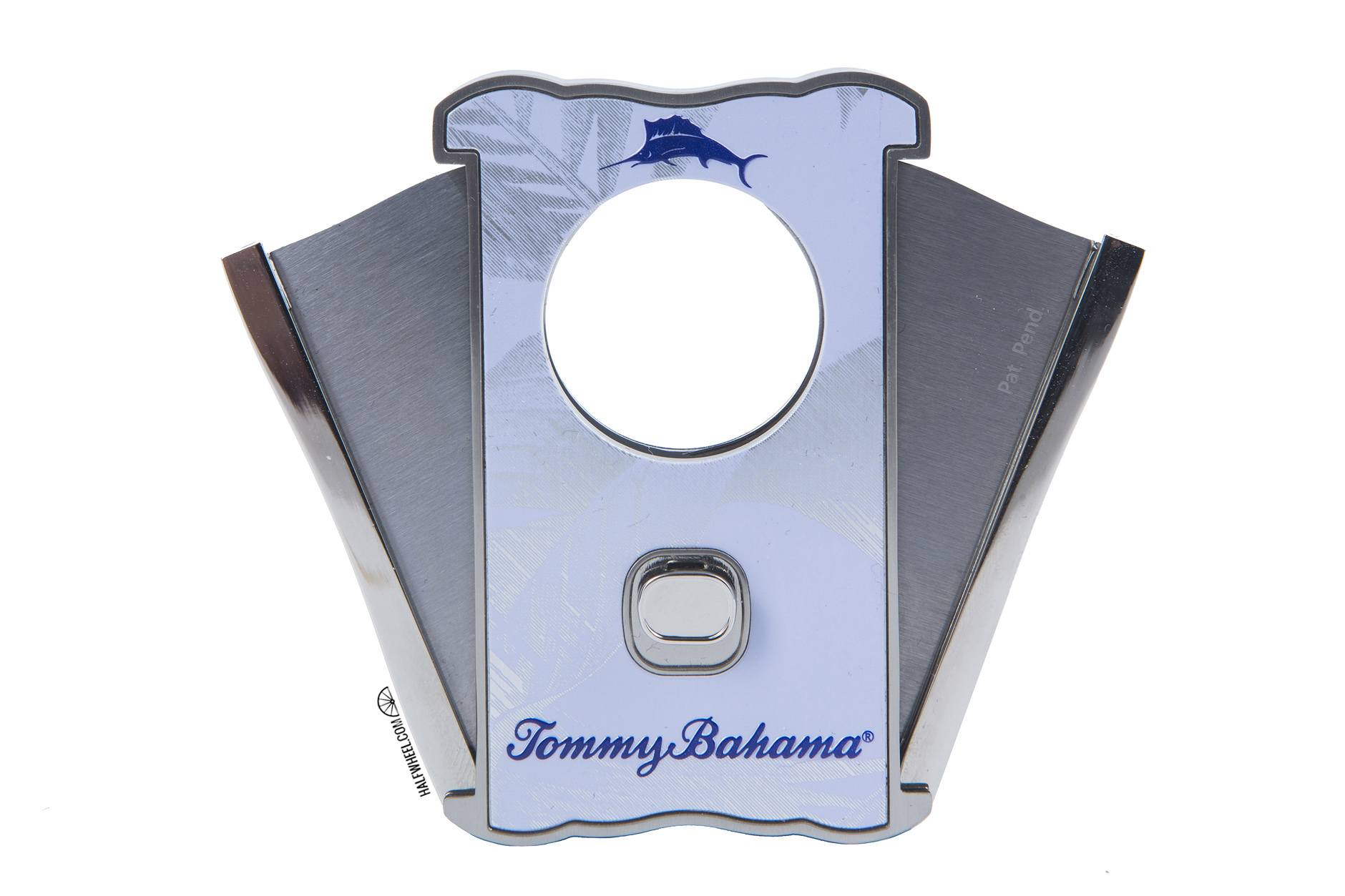 In terms of operation, the Tommy Bahama Signature & Marlin features two stainless steel blades on either side which are activated by pushing down on a small nub on the bottom section of the cutter, releasing both of the spring loaded blades quickly outward with a loud click. Unlike a number of cutters that look similar, the blades actually come out at an angle, meaning that the entire cutter looks somewhat like a fan when both blades are fully deployed. You then put the cap of the cigar into the resulting opening and push the blades together, resulting in a straight cut through the cigar. As both blades cut through the cap and come to the end of their journey, they lock in place with an audible click and stay that way until you push down on the trigger again. Although each of the blades can be moved back and forth independently once the trigger is pushed, the knob triggers both blades every time you push down on it, meaning that there is no option to open only one blade while leaving the other locked. As mentioned above, the optimum way to use the cutter takes a bit of time and effort to get used to: with the cutter held in one hand, your index finger goes on the top, your thumb rests on the right blade, your middle finger is placed on the left blade and ring finger goes on the bottom to stabilize the cutter with the pinky essentially hanging free. After some experimentation, I found that I had more control if I moved my ring finger to join the middle finger on the left blade while my pinky finger supported the cutter on the bottom.

After using the Tommy Bahama Signature & Marlin almost exclusively for close to a month, I quickly realized the numerous advantages the cutter has. First, the cutter is visually attractive, and with its combination of light purple background, dark blue raised logos and chrome accents, it really stands out. Second, the Tommy Bahama Signature & Marlin is surprisingly heavy, meaning that the cutter is more stabilized when you are cutting a cigar, allowing for both a smoother cut and fewer issues with torn wrappers. Third, both blades are sharp and the cutter is extremely well built, meaning I had no issues at all with almost every cigar I cut with it. Finally, the fact that the cutter is packaged in an embossed decorative tin gift box and comes with its own leather sheath—in a very attractive shade of blue that matches the color of the logos on the cutter itself—is a nice touch, and one that is not seen very often with cutters these days. For some bonus points, it also matches the shirts I wear 98 percent of the time. Having said the above, there were some issues with the Tommy Bahama Signature & Marlin Cigar Cutter as well, starting with the aforementioned fact that the optimum way of cutting is not all that intuitive, leading to a few badly cut cigars while trying to learn the best way to use it, although that became less of an issue the more familiar I became with the process. In addition, while the design of the front and back of the cutter was fingerprint proof, the chrome accents on the top, bottle and sides—as well as the blades themselves—have absolutely no issues constantly collecting dust, hair, fingerprints and dirt that had to constantly be wiped off to keep it clean. Finally, the knob does stick out a bit from the main body of the cutter, meaning there were times when it caught on various things as I was pulling it out to use it including the pocket of my jeans, the interior of my bag and the lip of my front shirt pocket. 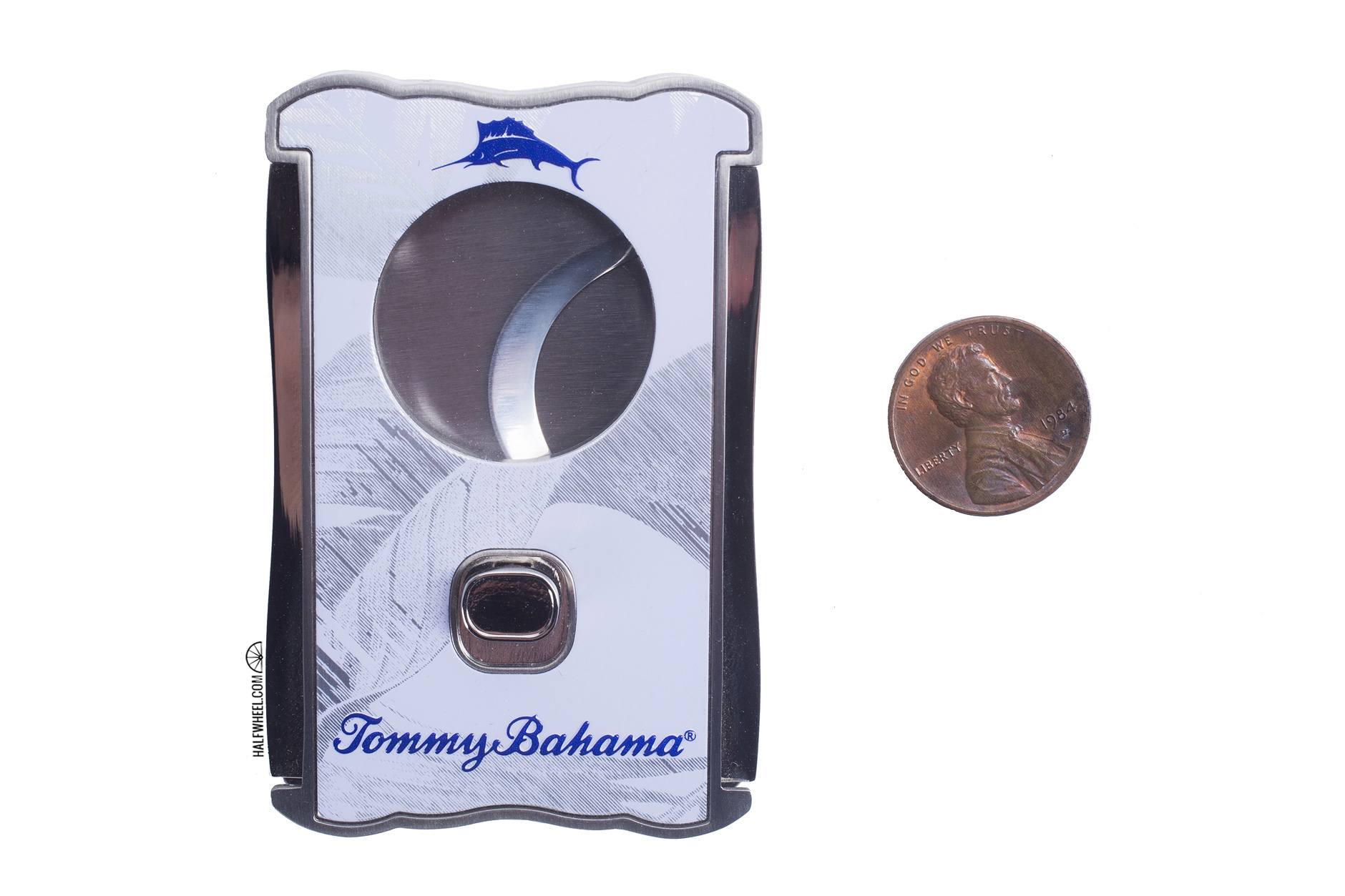 In terms of competition, there are a number of cutters that feature the same operation and general look as the Tommy Bahama Signature & Marlin. First and foremost is the XIKAR Xi, the item that revolutionized the classic dual guillotine cutter. It’s offered in a variety of colors and blade options from $44.95 to $400.

Then there is the Caseti Dion Carbon Fiber Double Guillotine Cigar Cutter, which is similar in both looks and operation, but retails for about $15 less. In addition, Colibri sells the Monza which comes in $26 less price-wise and cuts up to 62 ring gauge cigars. Lamborghini offers its Precision Double Guillotine cutter that is similar in operation, but is also close to double the cost. Finally, S.T.Dupont offers the Xtend MaxiJet Series that looks very similar to the Tommy Bahama, but the price of $150 is significantly higher.

While the Tommy Bahama Signature & Marlin Cigar Cutter does have a warranty, it is capped at two years for defects only, which is fairly standard in the industry. While competitors Caseti and Colibri offer very similar programs, XIKAR’s products are covered by lifetime warranty, which basically allows you to replace it for just about any reason. After using the Tommy Bahama Signature & Marlin Cigar Cutter for almost a month, I have to say, I am fairly impressed with it. It is obviously a well-made product from the first time you pick it up, and while there is a slight learning curve to get the most out of each cut, I did not have any other major issues with using it after that break-in period. In addition, the blades are appropriately sharp and the exterior is visually attractive, and a number of people asked me who made the cutter while I was using based on the exterior alone. I have always been a fan of Tommy Bahama products in general, and the Signature & Marlin Cigar Cutter is a worthy addition to the company’s lineup, especially if you subscribe to the island lifestyle.